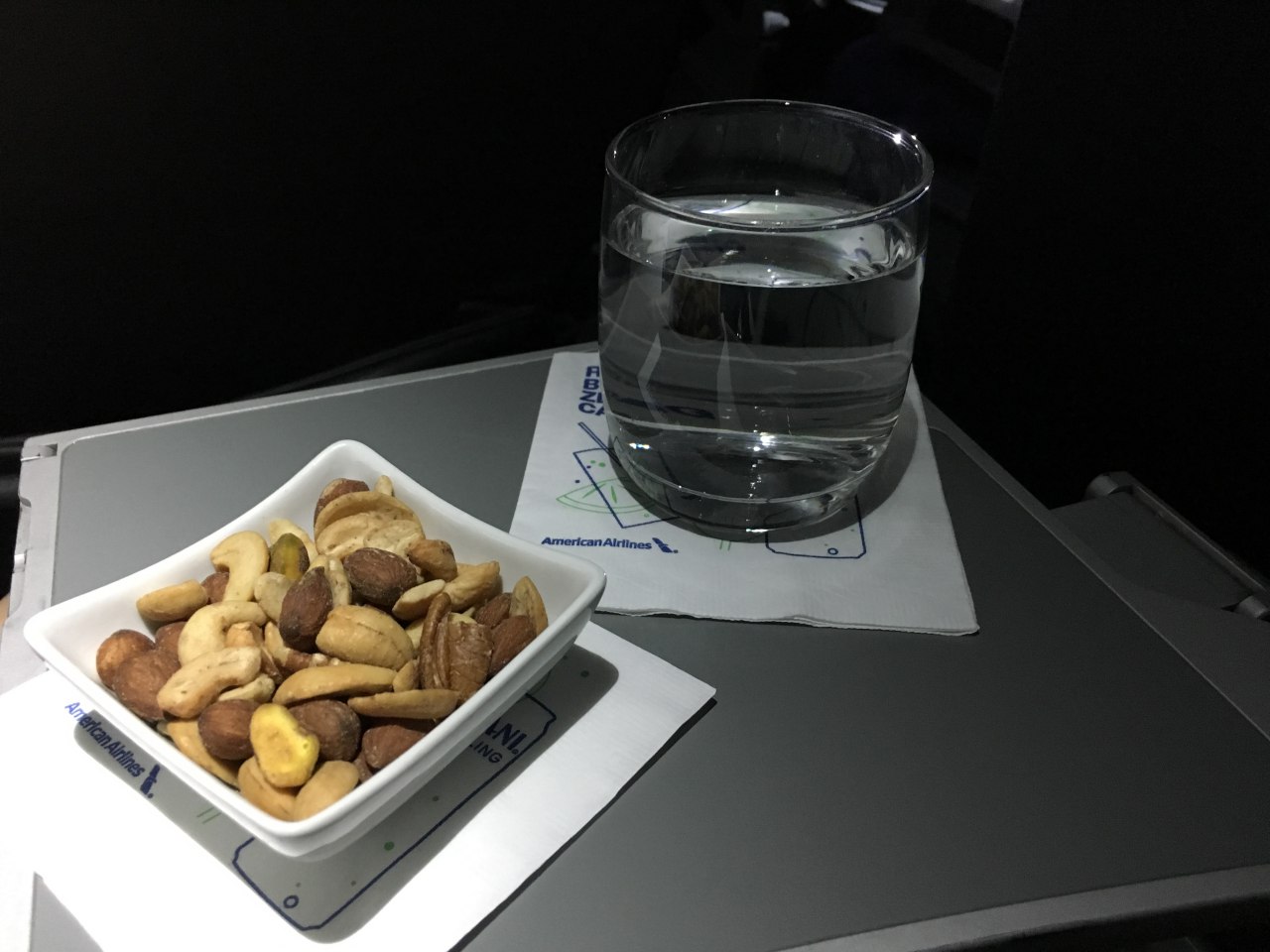 This Review of AA First Class Embraer ERJ-175 follows a Qatar QSuites Business flight, which I'll review later. Here are my photos and thoughts on the flight, which in this case was from Houston IAH to Los Angeles LAX.

It was an award flight, and originally (as is common with AAdvantage) there was no domestic first class award availability, so I was in economy. I continued to monitor, and a few weeks before the flight domestic first class saver award space opened up, so I booked it. Since I was already on a Qatar Business Class award MLE-DOH-IAH-LAX there was no charge to switch to AA First Class, which counts as business class for purposes of this award.

This was an early evening flight, with a waning sunset as we left Houston: American Airlines First Class on the E-175 has 12 recliner seats in a 1-2 configuration, so if you're flying solo as I was, I recommend seat 2A or 3A. If traveling as a couple, 2D/2F or 3D/3F are good choices. Generally I recommend avoiding the first and last rows to avoid galley and lavatory noise/light and main cabin noise, respectively. These are recliner seats, so don't expect too much if you're used to international flat bed seats. Still, they were certainly better than the super uncomfortable Alaska First Class seats, although nowhere near as comfortable as, say, the old Virgin America recliner seats, which reclined much more. The seat width is 19.9 inches, so a bit wider than American Airlines A321 transcon Business Class, but more than 2 inches less than AA A321 transcon First Class. There was no pillow, but a blanket in plastic packaging was at each seat. In my case, the plastic packaging was already half open, with doubtful cleanliness, so I decided not to use my blanket. There's a small drink holder that extends from one arm rest, while the tray table folds out of the other. Note that there's no IFE screens on these planes; if you want entertainment, you'll need to bring your own, or download the American Airlines app before takeoff, then connect to the WiFi signal (supplied by Gogo, although no purchase required if watching AA entertainment) then go to aa.viasat.com or aainflight.com in your browser and click on “Free Entertainment,” “Watch Now” or the play button icon.

Prior to take-off the flight attendant offered us pre-flight drinks. I asked if tomato juice was available, and requested it with ice.

About 30 minutes after take-off dinner and drink orders were taken, starting in back, from left to right. There was no menu, but the two choices offered were a Mandarin Cobb salad or a Greek plate.

When our drinks were served, we were also offered mixed nuts; these were cold, however, not warm.

Since we weren't offered a hot towel before the nuts, I asked the flight attendant if a towelette was available, and she said she'd be happy to check. Soon after, she returned with a sanitizing wipe. About 15 min later small hot towels offered. I'd think it would make more sense to offer towels before nuts, to clean hands with, since nuts are finger food, but I guess that's not how AA has programmed its service. 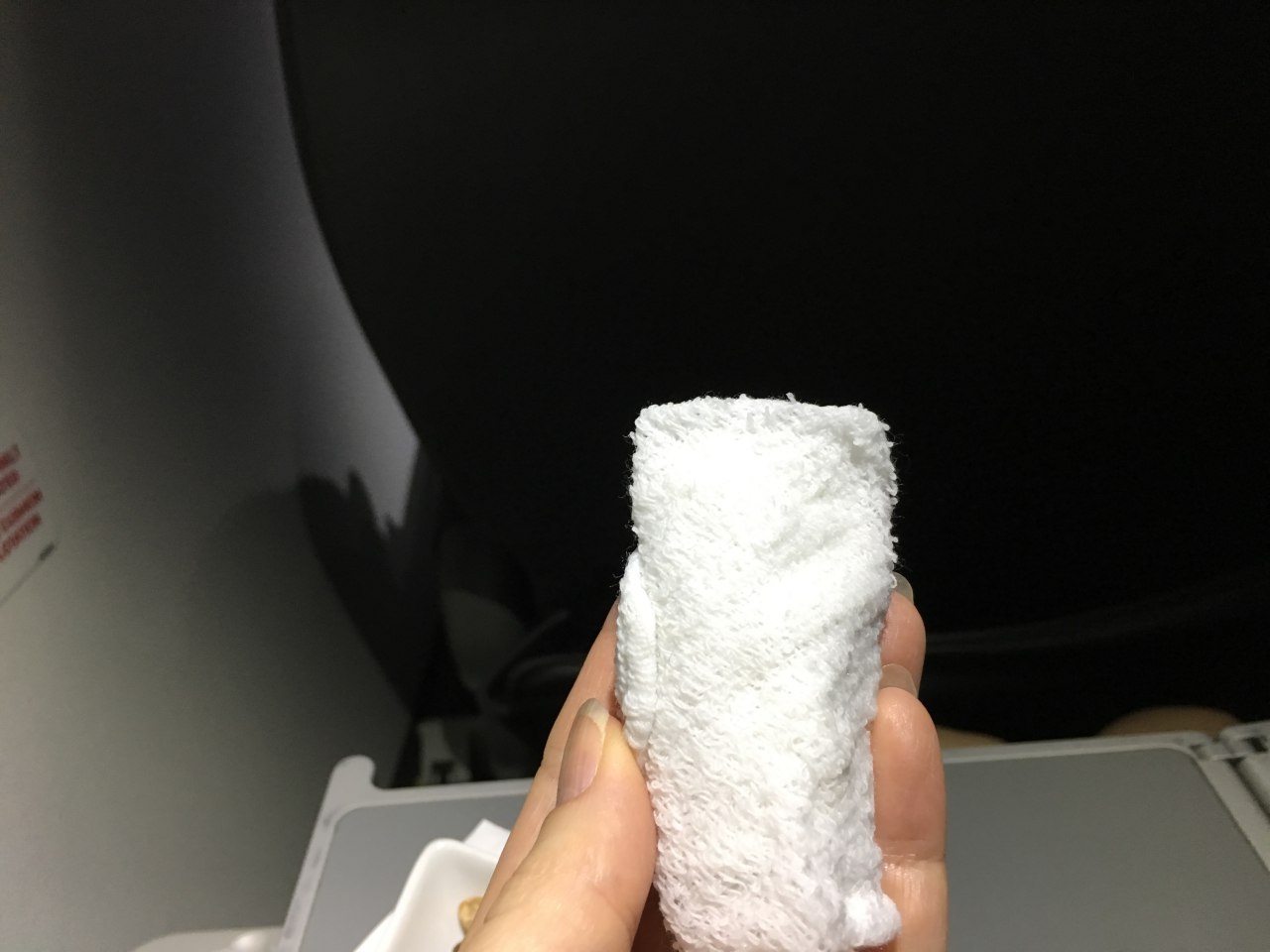 I ordered the Greek plate, which included orzo with marinated red peppers, zucchini with pesto sauce, hummus topped with feta cheese, a side dish and dessert. For all the criticism AA draws in terms of its food, I found the meal surprisingly good and fresh tasting.
The orzo, while not exactly al dente, was still close to perfectly cooked, and complemented well by the marinated red bell peppers and sun dried tomatoes. Zucchini are far from my favorite vegetable but paired well with the pesto. The hummus with feta cheese was also delicious.
The side dish of asparagus with marinated red bell pepper, olives and pecorino cheese was also fresh tasting, and I liked that the asparagus was still a bit crunchy, it wasn't overcooked. I didn’t finish the pecorino cheese, however, due to cheese overload from the feta served with the hummus. I don’t care for tiramisu, as there are so many other desserts I find more appealing, but this version was ok, no worse than what you’d expect as an in-flight dessert. Something a bit odd was that there was no bread or crackers to go with hummus–I even overheard another passenger complain about this. Perhaps AA is putting its passengers on a reduced gluten diet, although the tiramisu contradicts this.
Flight attendant came through and asked how everything was, and later she proactively asked if I’d like more water.
LA lights on our approach into LAX: While the flight was longer than I expected, due to headwinds, the actual in-flight service was quite good, considering how small the E-175 is. The main flight attendant serving first class was friendly and I liked that she proactively asked if I'd like some more water. The food, as expected for this size of aircraft, was cold, but also very fresh tasting. The lack of IFE will be an issue for passengers who haven't taken time to download the AA app before the flight, and the Gogo in-flight WiFi signal was pretty poor, however.

The main drawbacks were the recliner seat–I always wish they could recline further back, as sitting becomes uncomfortable after a couple hours–and in my case, the already open packaging of the blanket, although it wasn't so cold that it was really needed. I could have done without listening to the programming of the passenger behind me in 4A, who had apparently forgotten his headphones, but then, you don't get to choose your fellow passengers.

Separate Tickets: What to Do if You Misconnect

I run a travel company, yes, I’m sure 😉 You can even see American Airlines on the napkin in the water and mixed nuts photo. This was a single business class award ticket booked with Advantage miles, DOH-MLE-IAH-LAX