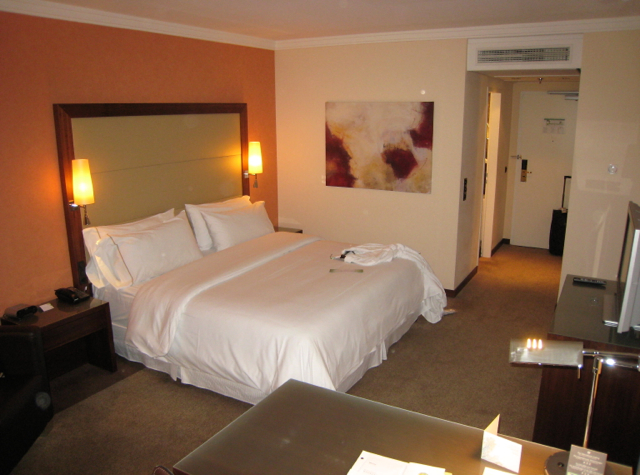 This Westin Grand Frankfurt hotel review is part of a UK and France trip report including flights in British Airways in New First Class, Singapore Business Class and Singapore Suites, stays in a Scottish castle and 5-star hotels in London and Paris, and Michelin Star Dining in Paris. For the prior posts, please see:

The Westin Grand Frankfurt is the hotel my wife Hilary booked for me for one night in Frankfurt, using SPG Cash & Points, before my return flight in Singapore Suites to New York.

The Westin Grand Frankfurt is 15 minutes from the Frankfurt airport by taxi (at least if you go directly there, which my driver didn't–I'm pretty sure I got ripped off when he claimed he had to go around a festival). When I arrived at about 10pm, there were no doormen or bell boys, not that it mattered since I just had carry-on luggage with me.

I entered into a lobby that was dark, empty except for one or two chairs and an antique car on the right hand side. On the left was reception, where there were 2 associates and no other guests, due to the hour. Check-in was easy, and so even though I arrived late and was tired I wandered over to check-out what turned out to be a vintage Bentley on display in the lobby. 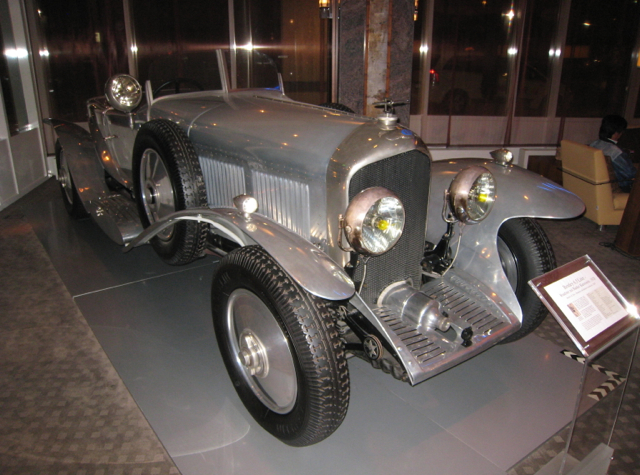 Since it was a Cash and Points rate, I was booked into a Classic Room, but probably thanks to my wife's midtier SPG Gold status, the room I received appeared to be a slightly larger Deluxe Room on the 5th floor. I was glad it was facing the courtyard, so there was no street noise. I've heard that some of the second floor non-smoking rooms are converted from smoking rooms, so you may want to avoid those. 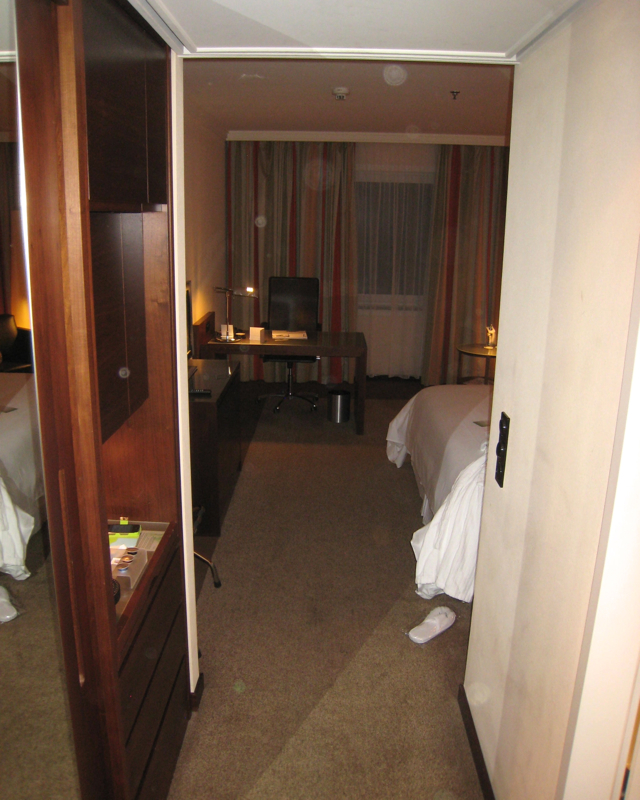 The Westin Heavenly Bed was the same that I've experienced in other Westins: a good comfort level (more comfortable to me than the Park Hyatt Paris bed, for example) although not as plush or as comfortable as Four Seasons beds, such as the Four Seasons Paris that we had recently stayed in. 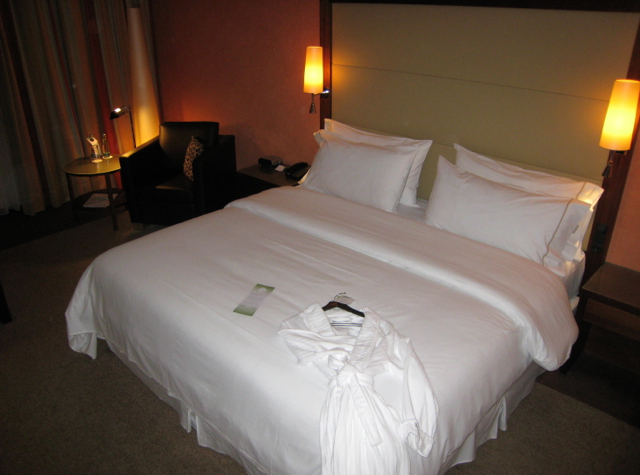 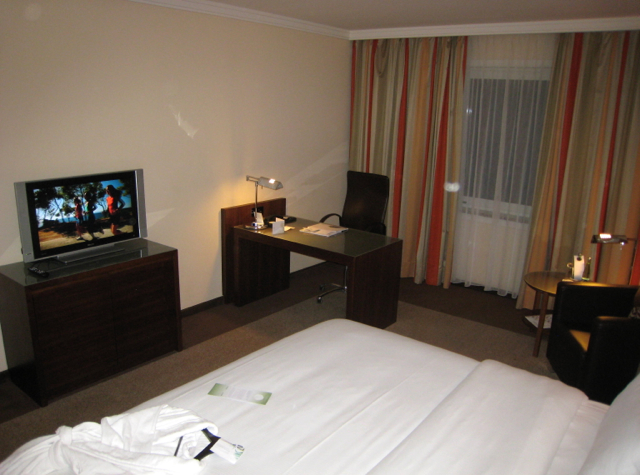 The Westin Heavenly Bath bathroom had the standard dual showerhead, with excellent water pressure, although there's no way my 6'5 frame would have fit in the bathtub comfortably had I wanted a bath, as it was fairly small. 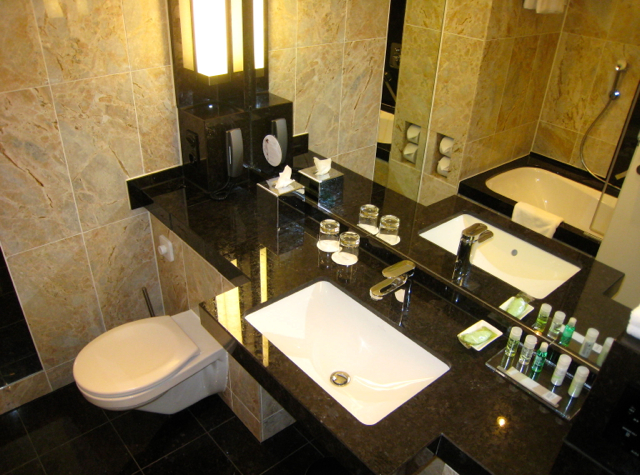 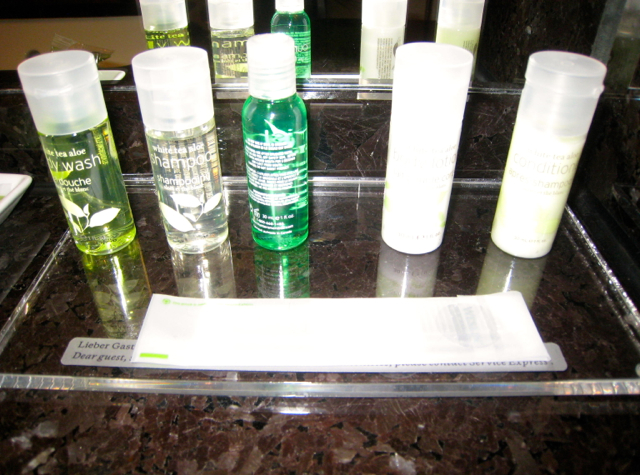 While I didn't use them, there was also a Nespresso machine and a mini bar: 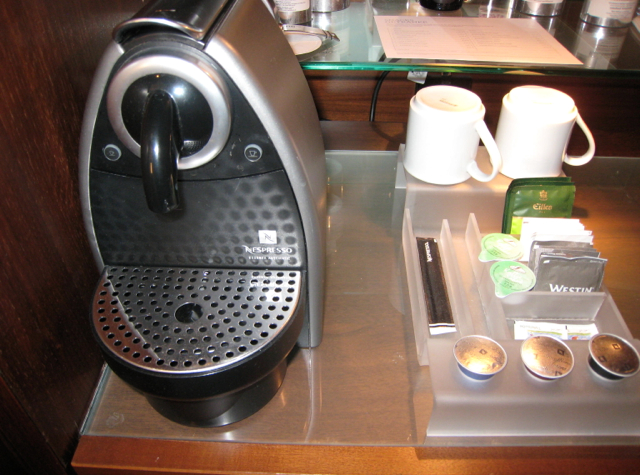 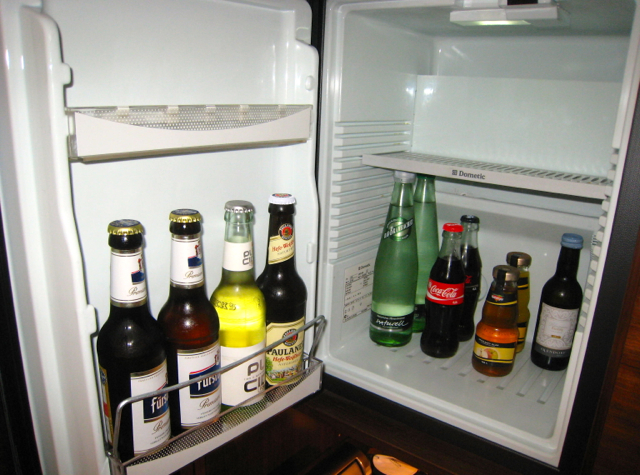 After check-in I needed a quick dinner, so I walked past the elevators to the restaurant, which was closed, but the bar was still serving food.  The spacious overhead atrium easily up with neon blue and pink, and even though that may sound garish, the light was rather muted and the effect was rather beautiful. 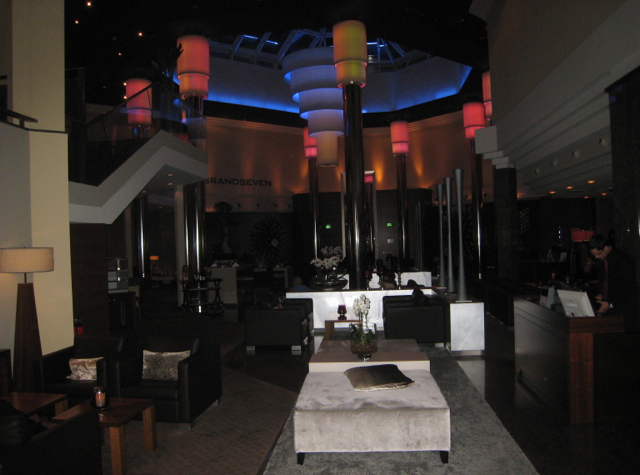 While I was only at the hotel at night, I'm sure during the day the atrium provides great natural light and is especially beautiful on days with a clear blue sky. 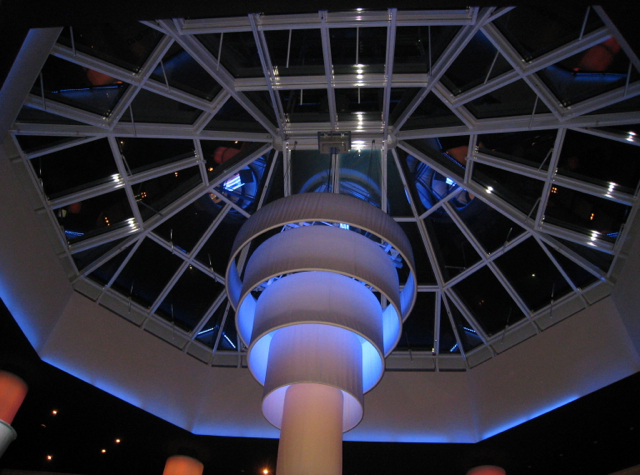 My meal was basic.  The frankfurters were good with mustard and beer. 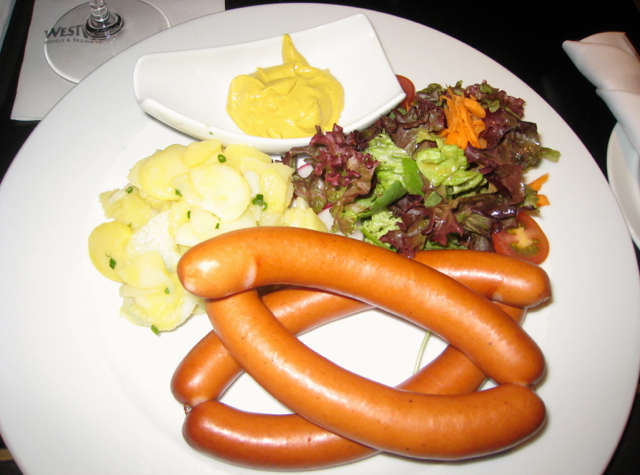 There were a couple of American guys chatting with the bartender on a first name basis, and very elegant couple who appeared to be on a date. I walked back to the elevator and saw another vintage car, this one on display from the second floor balcony. 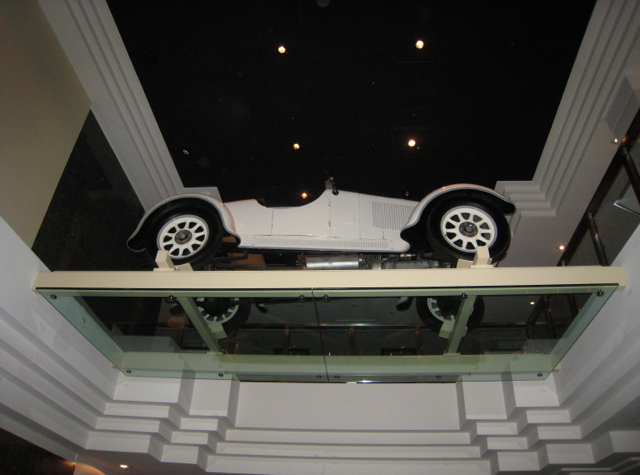 After dinner I walked back to my room. I'm not sure what the polite way to say this is, but as I approached my room I noticed a woman locked out of a room wearing only bikini underwear who looked like this was not an unusual occurrence for her.

If it had been open, I would have liked to have gone swimming, but the pool hours are 7am-10pm Monday to Friday and 7am-8pm Saturday and Sunday. 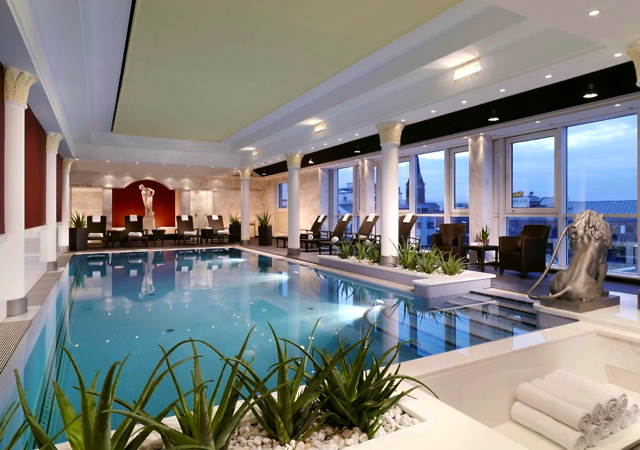 I'm not a spa person, but my wife tells me that the products, by Anne Semonin, remind her of the Anne Semonin bath amenities at Le Burgundy, a luxury boutique hotel in Paris that we have stayed at. 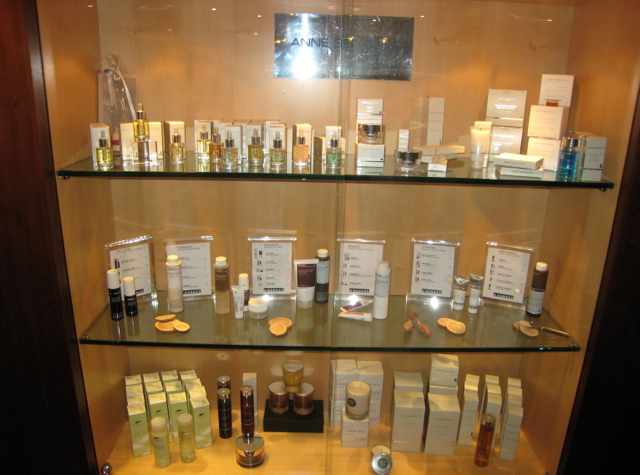 The Westin Grand Frankfurt is a good, serviceable hotel for a business trip or a quick overnight (the hotel seems comfortable with customers who like to lock their prostitutes out of their rooms). Definitely not the place to stay for a family vacation, however.