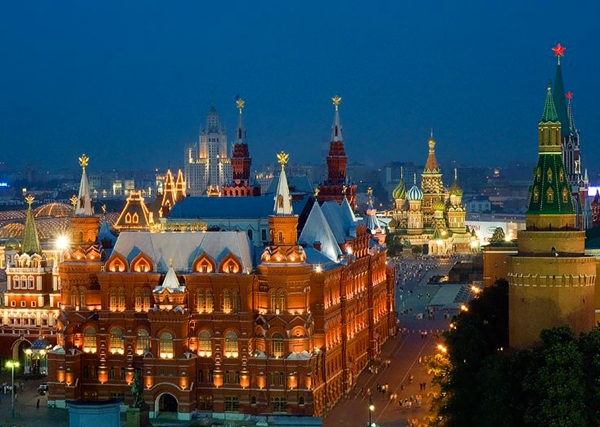 Moscow is one of the major world capitals and a city that combines ancient traditions with the latest trends. Although it’s true that it’s primarily thought of as a business center, Moscow can also be incredibly romantic and even kid-friendly, if you know where to go. Well-known attractions include Red Square and the Kremlin, the symbols of Russia and its history, beautiful in the daylight and magical in the evening lights when they’re illuminated. There are a number of parks, gardens, theaters and shows that are perfect for an leisurely stroll, and in the summer there are often live music events such as the International Jazz Festival in the Hermitage Gardens. Plus, you'll want to take a Moscow Metro Tour since Moscow has some of the most beautiful subway stations in the world, true works of art in themselves, adorned with marble, stained glass, chandeliers and mosaics. You'll also want to use the subway if you need to get anywhere fast, given how bad traffic jams can get in Moscow. At the end of a busy day, go for a swim in one of these luxurious Moscow hotels, perhaps followed by a soothing massage and drink in O2 Lounge at the Ritz-Carlton, with its spectacular views of Red Square and the Kremlin.

The new Four Seasons Moscow, which just opened in 2014 in the completely renovated historic Hotel Moskva, has a prime location that overlooks Manezhnaya Square, right by Red Square. An easy 5 minute stroll takes you to Red Square, and a few minutes more to Lenin's Mausoleum and St. Basil's Cathedral. It's incredibly convenient to get to as well, since the Okhotny Ryad Metro Station is a few steps from the hotel's entrance.

The Four Seasons Moscow gets everything right, from the friendly and professional service that bests most Western European and U.S. hotels to the most spacious entry level rooms in Moscow: Premier Rooms are 430-635 square feet, and some have balconies with a lovely view over Manezhnaya Square. Don't miss the extensive full service spa on the 5th floor, with its large swimming pool flooded with natural light from the glass atrium, plus underwater music to listen to. In the changing room, radiant heat relaxation chairs, a Finnish sauna, steam room and experience shower await. 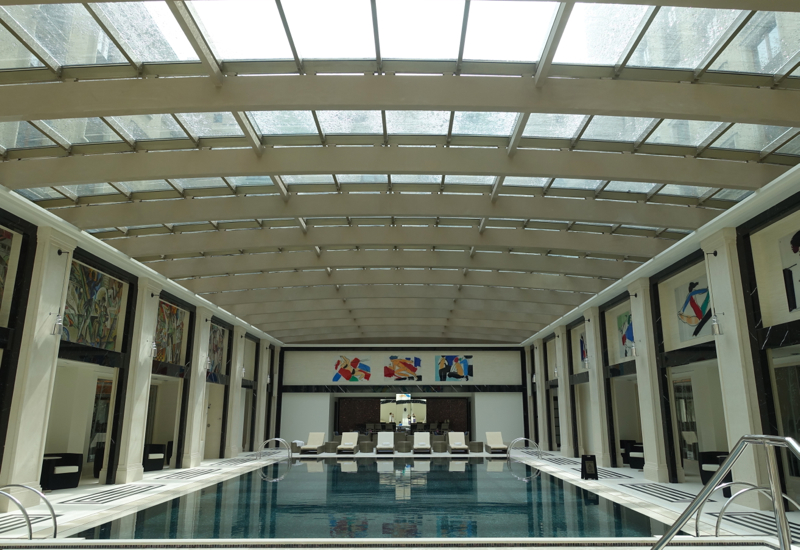 Lotte Hotel
Moscow isn't exactly a city known for great service, even in upscale hotels, which makes the friendliness and professionalism at the Lotte Hotel all the more remarkable and appreciated. Even standard Superior Rooms are well-appointed and enormous, Moscow's largest at 516 square feet, with elegant marble bath to match. Enjoy the top-rated Mandara Spa, which uses Elemis products and offers couples suites for massages. There's also a tranquil indoor pool to enjoy, even if you don't visit the spa. Gastronomes are in for a delight with Les Menus par Pierre Gagnaire, featuring innovative French cuisine from the acclaimed 3 Michelin star chef, and an extensive wine cellar to match. Check out our Lotte Moscow Hotel Review for more photos! 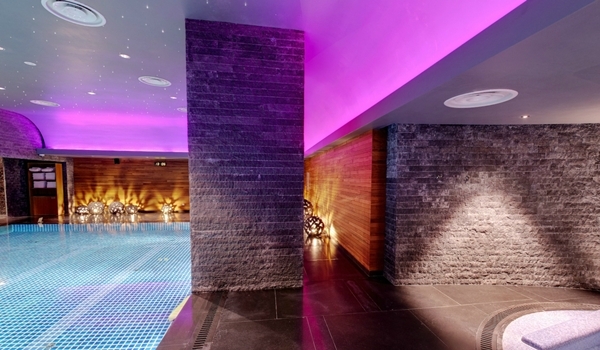 Ararat Park Hyatt
Just a short walk from Red Square and the Kremlin, the Ararat Park Hyatt offers more modern, minimalist design in its rooms than either the Lotte or the Ritz-Carlton, and many rooms have recently emerged from a renovation, although note that there is still ongoing renovation of some rooms and public areas through the end of 2012. Standard Park Rooms are smaller than the Ritz-Carlton and Lotte but still good sized at 376 square feet, and come with comfortable Park Hyatt beds, free WiFi, and a bathroom with separate deep soaking tub and rainfall shower. The heated bathroom floor is an especially nice touch if you're in Moscow during the freezing winter. Unwind at the lovely pool and spa, and don't miss a pre-dinner or post-prandial drink at the rooftop Conservatory, with its view of the Kremlin. 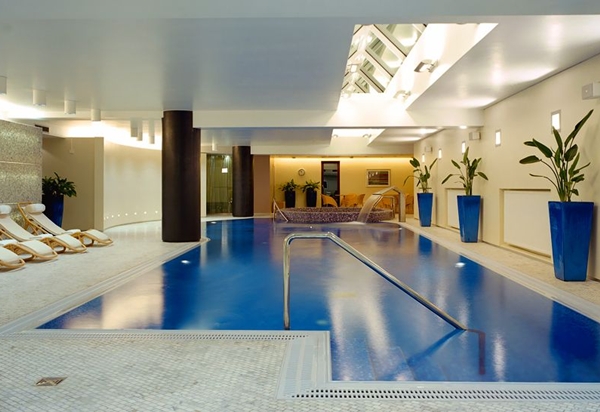 The Ritz-Carlton Moscow
I well remember when this hotel opened, as I was working in Moscow at the time. Yes, its lavish elegance is over the top, and perhaps not for everyone, but the rooms are plenty high tech as well, and the location, views, and pool and spa are enough of a draw to overlook some of the slightly impersonal and aloof service you may receive. For a more personalized experience, splurge on the Club Floor (which you may even be able to pay cash to upgrade to) which is one of the best Ritz-Carlton Club Lounges in terms of food, service, and incredible views. If you're not on the Club Floor and not in a view room, don't miss the modern rooftop O2 Lounge, with its striking glass atrium, outdoor seating, funky Faberge egg chairs, and quite good (albeit overpriced) sushi. 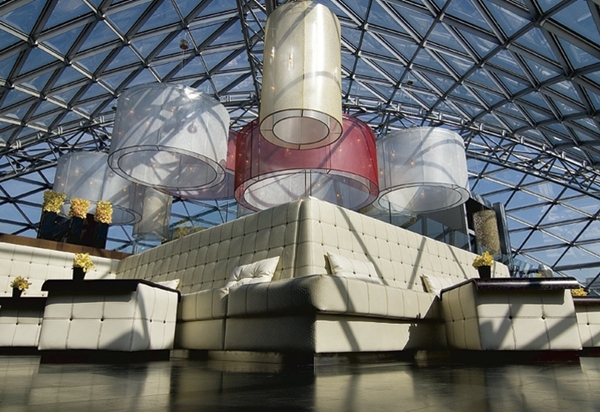 The Radisson Royal is one of the most iconic hotels in Moscow, as it's housed in the former Hotel Ukraina, one of the legendary Seven Sisters, monumental neoclassical skyscrapers built under Stalin in the early 1950s by architects Arkady Mordvinov and Vyacheslav Oltarzhevsky. It emerged in 2010 in its current incarnation as the Radisson Royal after a 3 year renovation. The hotel's location on the Moskva River Embankment is not for everyone, since it's about a 35 minute walk to the Kremlin, but the upside is that it's a more peaceful area and you can easily take one of the scenic boat trips, including dinner cruises, that depart just steps from the hotel on one of the hotel's private yachts. Inside, expect a grandly adorned lobby, elegantly appointed rooms with Mühldorfer beds, pillow menu, luxurious Frette bathrobes and towels, free WiFi, and no less than 9 restaurants and bars, several (Arkady Novikov's Tatler, Romantic Restaurant and Takasa) with stunning views of Moscow. The Spa and Royal Wellness Club includes a the largest Technogym in the world and a 50 meter pool, so bring your swimsuit for a workout or simply enjoy relaxing in one of the poolside lounge chairs. Shopaholics will want to bring their wallet–this may be the only Moscow hotel where the hotel's boutique shops include a Rolls Royce dealership. Don't miss the beautiful and very life-like “Moscow, the capital of the USSR” diorama that depicts all of Moscow at a scale of 1 to 75. See our Radisson Royal Moscow Hotel Review for our photos and experience. 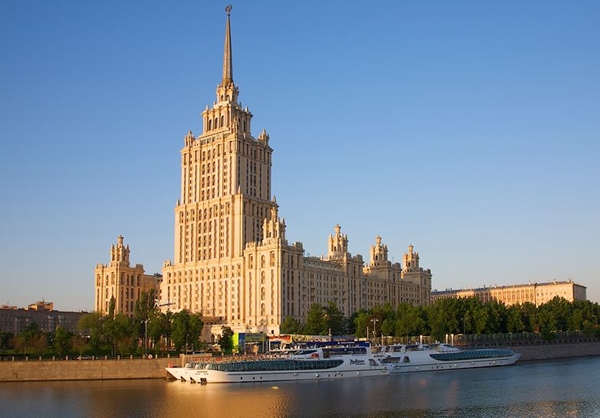 Here are some of the best ways to get to Moscow using frequent flyer miles or loyalty points:

1. Direct United flight, for example from Washington DC Dulles (IAD) to Moscow Domodedovo (DME) which is about 10 hours. A Saver Award in First Class is 135,000 miles roundtrip, Business is 100,000 miles. Earn the miles by making your own 100,000 credit card bonus offer using the Ink Bold, or by applying at the same time for the Ink Bold and Chase personal card, such as the United MileagePlus Explorer, or the Sapphire Preferred, since Chase will usually approve a personal and business card application submitted at the same time.
2. Lufthansa First Class (last minute)
If you have the flexibility to take a last minute flight to Moscow (you'll probably want to get your visa sorted out beforehand, since it can be difficult and expensive to expedite) you could take Lufthansa first class, for example from NYC to Frankfurt, Dusseldorf or Munich, then another Lufthansa flight to Moscow. Using United miles, this will also be 135,000 miles roundtrip. Definitely recommend springing for first class over business, since Lufthansa business class is still angled flat seats, not flat bed seats, except for flights from Washinton Dulles (IAD) where Lufthansa has already rolled out its new business class.
Apply: Chase Ink Plus – 50,000 points
Apply: Chase Sapphire Preferred
3. Aer Lingus to Dublin, Ryanair to London then British Airways to Moscow
This is a bit convoluted, but if you want to work in a stopover in London anyway and you have some British Airways Avios to burn, it could be a good bet.

As Ben wrote in the 15 Best First and Business Class Airline Awards in 2012, you can transfer American Express Membership Rewards points or SPG points to Singapore Airlines KrisFlyer and redeem 114,750 KrisFlyer miles and about $400 in taxes for a Singapore Airlines first class roundtrip ticket to Moscow.