This past weekend I spoke at Frequent Traveler University in New York, which was a daylong event dedicated to learning everything there is to know about earning and redeeming miles through a variety of methods. I covered the topic of earning miles by flying, and one of the more complicated concepts I covered was “married segments.”

It goes without saying that airline pricing is irrational and not the least bit transparent. For example, it’s not unusual for a ticket from San Diego to Los Angeles to be more expensive than a ticket from San Diego to Washington, connecting in Los Angeles on the same flight mentioned above. Yes, a 109 mile flight can cost more than a 109 mile flight plus a connecting 2,288 mile flight. No matter how you slice it, that makes no sense. While we can’t change the way airlines price tickets, we can do our best to understand their systems and use them to our advantage, potentially saving us a lot of money.

To understand married segments it’s important to understand the degree of price discrimination that goes on in the airline industry, and how it works. Airline pricing works in two ways. First, airlines publish fares between markets which book into certain “fare classes.” In other words, between a given city pair there are multiple fares, even for the same airline for the same cabin. For example, I just pulled up the fares between Tampa and Los Angeles on American through ExpertFlyer. Right now they have fares ranging between $144 one way and $2,503 one way. Which fare you get depends on which dates you want to travel, which flights you want to fly on, how flexible you want your ticket to be, etc. 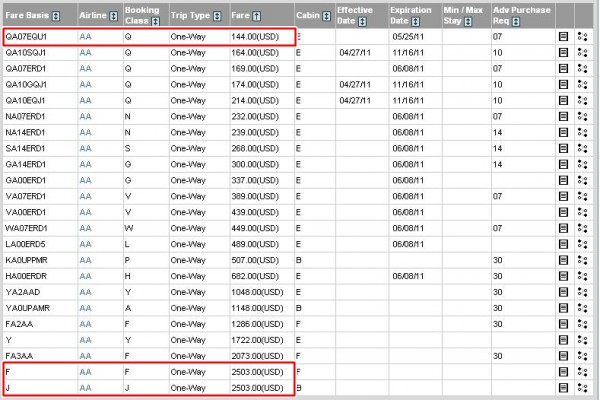 So how do you actually get that cheap “Q” fare? Well, you need to find a flight that meets the guidelines of the fare rules. For example, the fare has a seven day advance purchase requirement, meaning within seven days of departure the fare is not available and you'd have to go to the next lowest fare with a less restrictive advance purchase requirement, which in this case is a $337 one way ticket.

The other component of the fare being available is that there actually needs to be space in the “Q” fare bucket. The airlines have dozens of fare buckets for any given flight, and they put “inventory” into those buckets based on their sales forecasts for that flight. This is what makes airline revenue and inventory management so dynamic.

For example, I just pulled up the fare bucket availability for May 14 between Tampa and Los Angeles, and it looks like this:

As you can see, there is no Q fare for either flight; the lowest fare “bucket” available for both flights is “N,” with 4 seats available, which means the lowest possible fare we could hope to book would be the “N” fare listed in the table above, which is $232 one way, which is far from a great mileage run.

If the flights is months away and wide open, American might open up “Q” space on that flight, since they’re happy selling seats, even if they’re not all that expensive. Along the same lines, if a week before departure the plane is still fairly empty, they might open up more “Q” space, figuring it’s better to sell the seats for something than to let them go out empty. Conversely, if a flight is fairly full American might only be selling seats in the higher fare buckets, where a ticket would cost more. After all, they don’t want to fill the plane with passengers paying low fares, only to not have any last minute seats left to sell to a passenger willing to pay an expensive fare.

As if that’s not complicated enough, whether or not airlines release a certain fare class is dependent not only on which flight you’re flying, but what your origin and destination is, which is where married segments play a role. The easiest way to explain this is in the form of example. Say a flight from Washington to New York is fairly full. American might not want to sell another ticket in the “Q” bucket, which might cost $69, because there’s not a whole lot of upside potential there for American. In other words, they could sell that seat for $69 now, but that may well be preventing a full fare passenger from booking a ticket close in, because the flight would be sold out.

Here's a United example I just pulled up on ExpertFlyer.com. Say I'm trying to fly between San Francisco and Pittsburg on the lowest fare possible. When I search for that, I get the following results:

This is great, because as you can see, United is still willing to sell two seats in their lowest fare bucket, which is “G.”

Logically most people would assume that both the San Francisco to Washington and Washington to Pittsburgh flights would have that space individually as well, though when we search those exact flights separately we get the following results:

As you can see, now neither segment has “G” space, meaning if you searched for those flights individually, you would have gotten a much higher fare.

Married segments work both ways, however. Sometimes there is better availability when you’re searching for a flight that includes a connection, as is the case with the example above, while other times the space is better when you search segments individually. In other words, it could be that you’re flying between two cheap markets, say Tampa and San Diego. Say you want to fly from Tampa to Chicago to San Diego. United may very well NOT open up a low fare bucket when you search for flights from Tampa to San Diego (forcing the connection in Chicago), while they would open up the space if you were flying the flights individually, since they see more revenue potential there.

So what are the practical implications of this? Well, as a consumer you can get around any issues associated with “married segments.” All it takes is going to the airline’s website and using the multi-city function. That said, it's easier to see the fare bucket availability and know whether you're looking at the lowest possible fare if you use ExpertFlyer.

Recently I was trying to book a mileage run on American from Tampa to Las Vegas connecting in Miami, which is the most miles I could earn on American between those cities. When I searched for fares between Tampa and Las Vegas I was offered the flights I wanted, though I was quoted a fare of around $200 one-way (which booked into “V” class, a higher fare bucket). However, I then went to aa.com’s multi-city search function, and entered the segments individually. I searched for flights between Tampa and Miami and then Miami and Las Vegas. This time, instead of getting the same price, I got a total fare for the two flights of $100 – about half of what I was originally quoted.

Another example is that I was recently trying using the multi-city search function on American’s website for the reasons stated above, booking a ticket between San Diego and Pittsburgh, connecting in Chicago. I entered the segments individually and got the flights I wanted. However, the one way fare was over $250. However, then I just searched San Diego to Pittsburgh as a one way fare, and the ticket was under $100 all-in, for the same flights and connection in Chicago. Why? Because American was willing to open up the lower fare buckets if connecting than just if flying either segment.

It might sound complicated or obscure, though give it a try. More often than not you'll find a discrepancy if searching for the same itinerary online as a multi-city vs. as a one way or roundtrip ticket. In some cases you'll find one method saves you money, while other times it costs you more, though that's the beauty of being able to pick and choose.