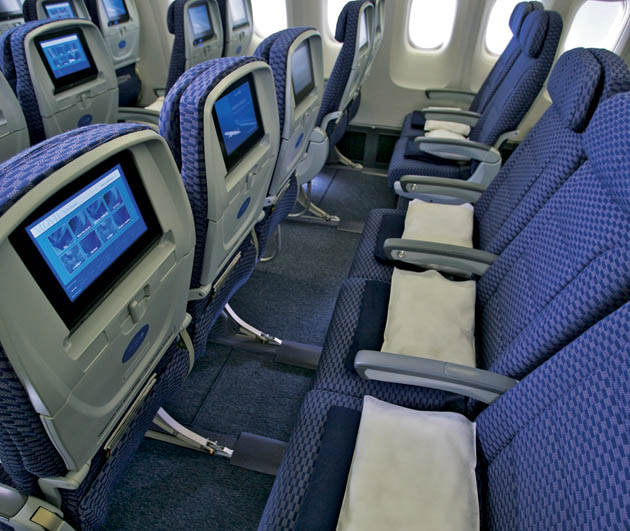 TravelSort reader Mike writes “What are the ways to get a free upgrade to United Economy Plus? I'm 6'3 and am really tired of having my knees jammed up against the seat in front of me (and of course the guy or gal in front of me is even less pleased) but would like to avoid paying the additional fee for Economy Plus if I can.”

Mike's question is probably common to a lot of folks that fly United even occasionally, and would love a free upgrade to United Economy Plus, with more legroom. Unfortunately a free upgrade isn't that easy. Here are the top ways to get it:

1. Be a United Premier Gold, Premier Platinum or Premier 1K to Upgrade to United Economy Plus at Time of Booking

On both paid tickets and award tickets, United elites with Premier Gold, Premier Platinum, Premier 1K or Global Services status are able to upgrade to United Economy Plus at the time of booking.

2. Be a United Premier Silver to Upgrade to United Economy Plus at Time of Check-In

United Premier Silver members are only able to upgrade to United Economy Plus at the time of check-in (24 hours before departure), *not* at the time of booking.

3. Be on the Same Reservation as a United Elite

4. Be Star Alliance Gold and Get Lucky

5. Be on a Business or First Class Award Flight and Ask Nicely

If you booked an international business or first class United award ticket with the requisite number of United miles, but a segment didn't have award availability so you're seated in Economy, you may have luck by asking nicely at check-in, the lounge or the gate. There's no guarantee, but also no harm in asking.

6. Be Bumped Up Because There's No Space in Economy

If you have no United elite status, you could get very lucky if on a full flight such that you have a ticket but don't have a seat assignment.

Isn't There a United Economy Plus Annual Pass?

There used to be one; as of March 2012 United stopped selling these.

If I'm a United Elite But My Non-Elite Partner is Traveling on the Same Flight but a Separate Ticket Can I Get a Free United Economy Plus Upgrade for Him or Her?

Officially, no–your elite status allows you to upgrade up to 8 companions traveling on the *same reservation* to United Economy Plus. Companions on other tickets, even though they're on the same flight, are not eligible. That said, you may be lucky and get a sympathetic United agent to upgrade your partner anyway.

How Do I See What United Economy Plus Will Cost?

Simply mouse over an Economy Plus seat while making your reservation, and you should be able to see the additional cost. The price is added to your total reservation cost.

Why Are There Different Prices for Different Economy Plus Seats?

Can I Get a Refund of My United Economy Plus Seat?

Only if you weren't actually seated in Economy Plus, for example due to an equipment change, etc. Unfortunately, even if you paid more to select a certain Economy Plus window seat but were reseated in an Economy Plus middle seat, you wouldn't be entitled to a refund. The United terms state: “An Economy Plus purchase reserves a seat within the Economy Plus seating area. Specific seat assignments are not guaranteed.” Seems somewhat unfair, but those are the terms.

Do you have other tips for scoring United Economy Plus upgrades?

Best Airlines for Kids and Families