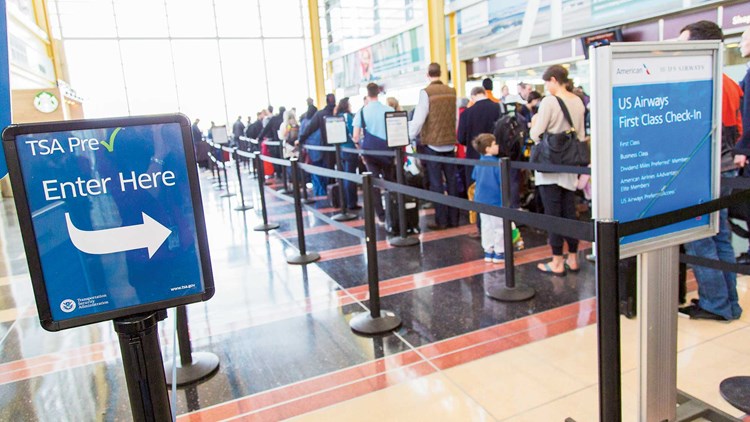 New TSA Screening Requires All Electronic Devices Larger Than a Cell Phone to Be X-Rayed Separately from luggage, per this TSA announcement. It's another reason to have TSA PreCheck, since TSA PreCheck passengers in TSA PreCheck lanes are exempt, and can leave all electronics in their screened luggage.

Aren't Laptops Already Required to Be Removed and Screened Separately?

Which Airports Are Already Implementing The New Screening Procedures?

Passengers at the following airports are already required to remove all electronics larger than a cell phone from their bag before screening, and the new procedures will be rolled out to all U.S. airports over the coming weeks and months:

I Have TSA PreCheck; Which Airlines Participate in TSA PreCheck?
Most U.S. airlines already participate in TSA PreCheck, and many foreign carriers do as well, although there are some notable exceptions. For example, British Airways doesn't (see British Airways: TSA PreCheck Needed) and neither does Swiss or Austrian Airlines (even though they are part of the Lufthansa group, and Lufthansa does participate). Among major Asian carriers, ANA, Asiana, Cathay Pacific, JAL, Korean Air do not participate; only Singapore does. Here's the current complete list; I've put the larger airlines in bold font:
Credit Cards That Provide Application Fee Credits for Global Entry / TSA PreCheck?
Several credit cards provide statement credits for the $100 Global Entry fee credit; my favorite is the Chase Sapphire Reserve, mentioned on our Best Travel Credit Cards page, but others include the Citi Prestige, AMEX Platinum, AMEX Business Platinum, and Citi Executive AAdvantage cards.
Are you exempt from these new procedures thanks to Global Entry or TSA PreCheck?
Recommended Posts
Emirates: Electronics Ban Lifted
TSA PreCheck: Emirates, Virgin Atlantic and Avianca Join
TSA PreCheck: Which Airlines and Airports?
How Early to Arrive at the Airport?
AMEX Platinum Global Entry Benefit Tips