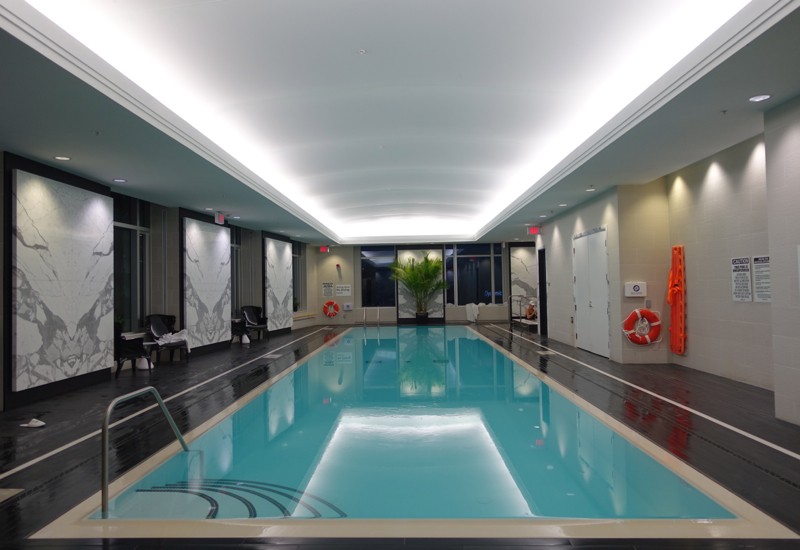 The Trump Toronto is located at 325 Bay Street in downtown Toronto, which was convenient for us since we took the Union Pearson Express train from Toronto's Pearson International Airport to Union Station, about a 10 minute walk from the Trump Toronto. It was raining when we arrived, and while we had come prepared with an umbrella, we were happy about the short walk.

We arrived at 2pm and there was no wait at reception to check-in. We were offered a hot towel, a nice touch given the chilly, wet weather, though our room wasn't yet ready so we left our suitcases before heading out for brunch. When we returned, our luggage was already in our room. 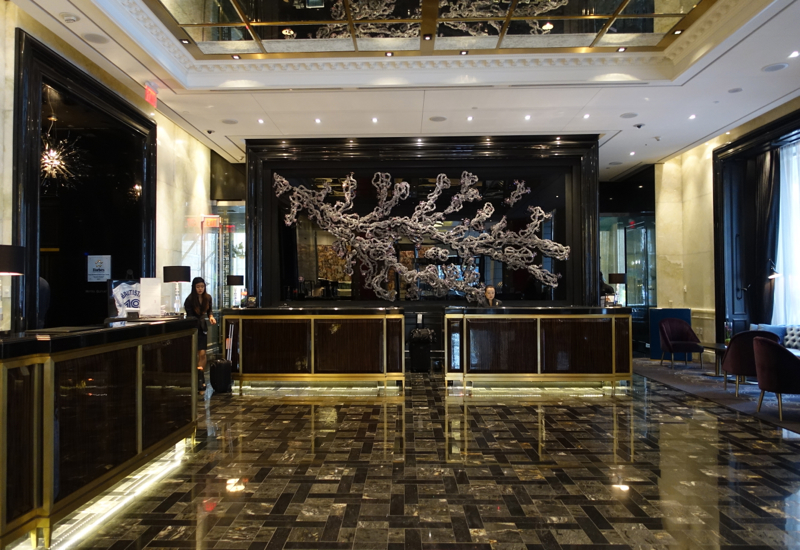 Superior Rooms are 550 square feet, so a good size, though as we had two beds (which we'd requested, since I was traveling with my son) the room felt less large than if it had been 1 king bed. Here's the view upon entering our room: 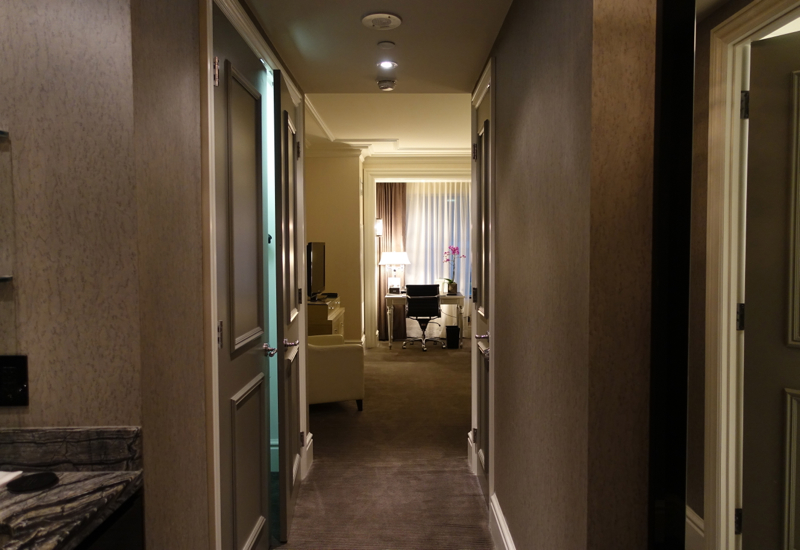 On the left when entering was the mini-bar, with a Nespresso machine on the counter. 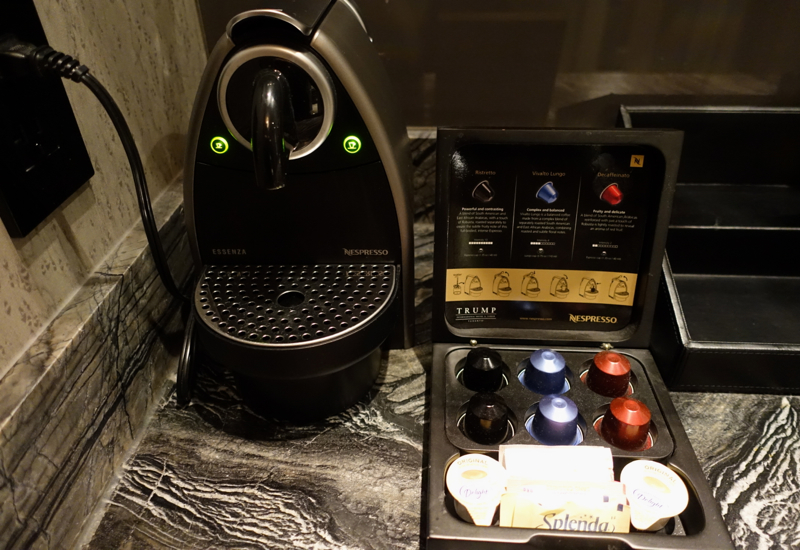 On the right was the bathroom, which was well appointed with double sinks and a TV embedded in the mirror: 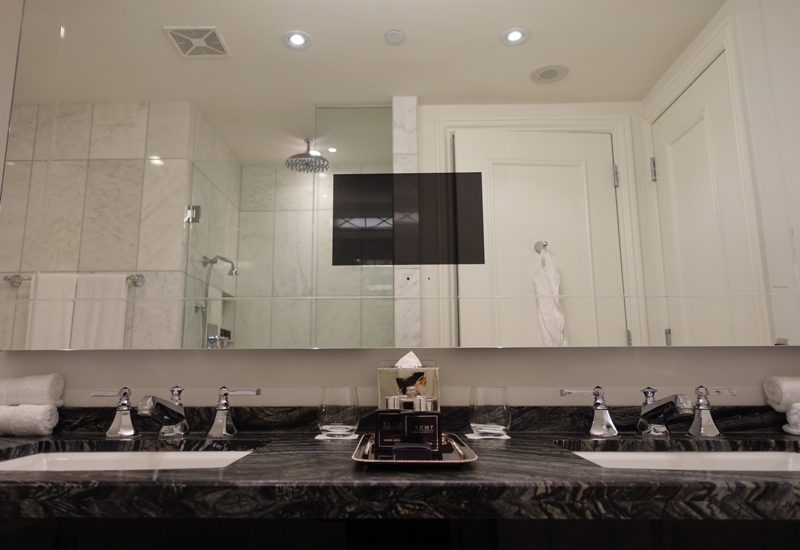 There was a bathtub, perfect for my son's bubble bath after going swimming, as well as a separate glass enclosed rain shower: 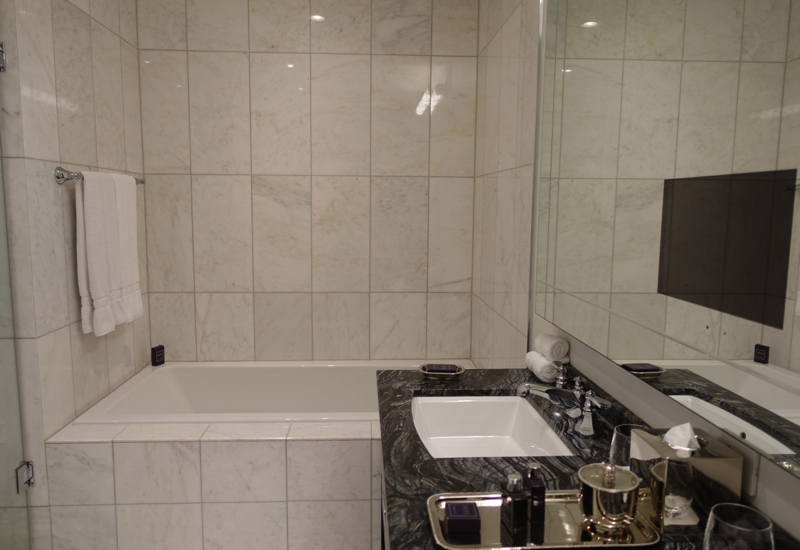 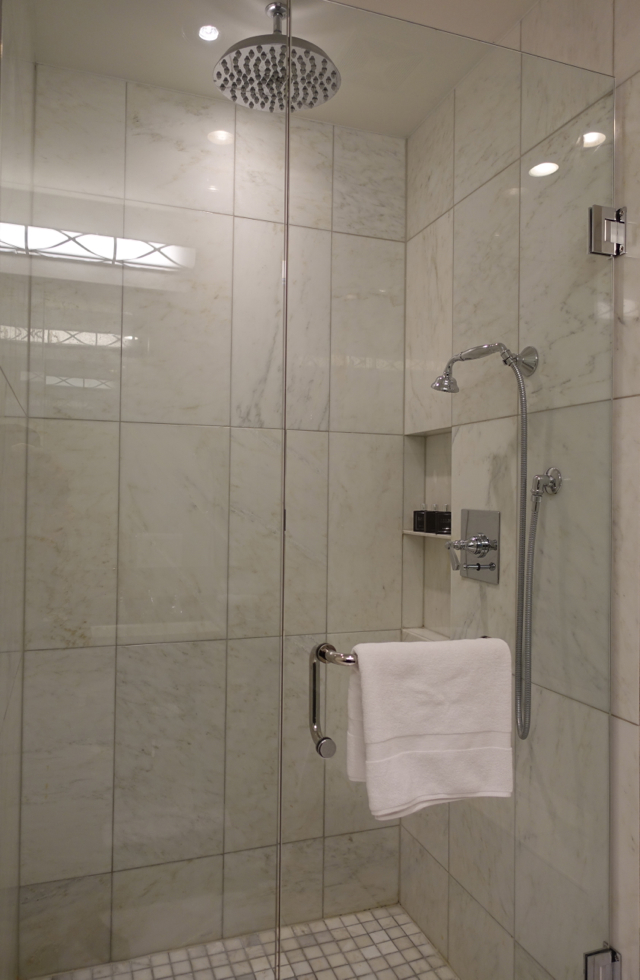 Bath products were unimpressive: Trump branded, instead of a name brand such as L'Occitane. 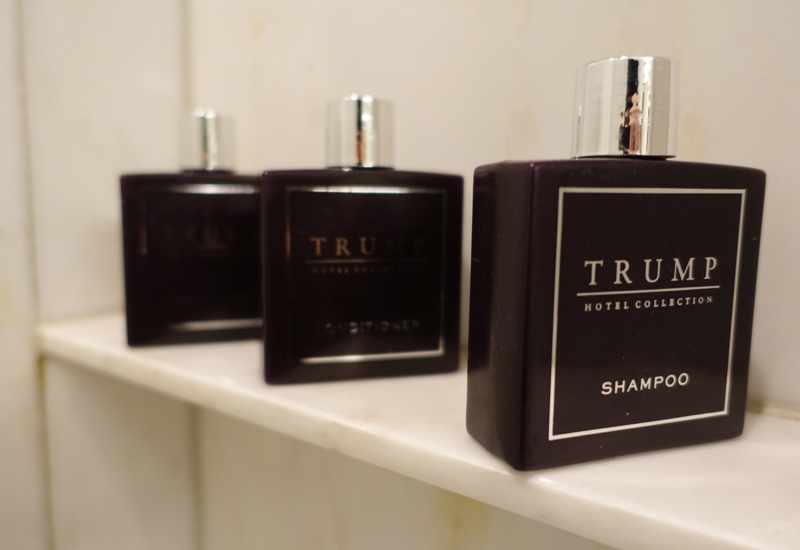 The beds looked fine, but I have to say that they were some of the firmest I've stayed on for a major North American luxury chain, and I tossed and turned much of the night due to how uncomfortable they were. Within the past year, my two worst night's sleep were here and at the Conrad Maldives, which also has some of the firmest and most uncomfortable beds I've slept on, though I supposed anyone who likes sleeping on the floor would love them. 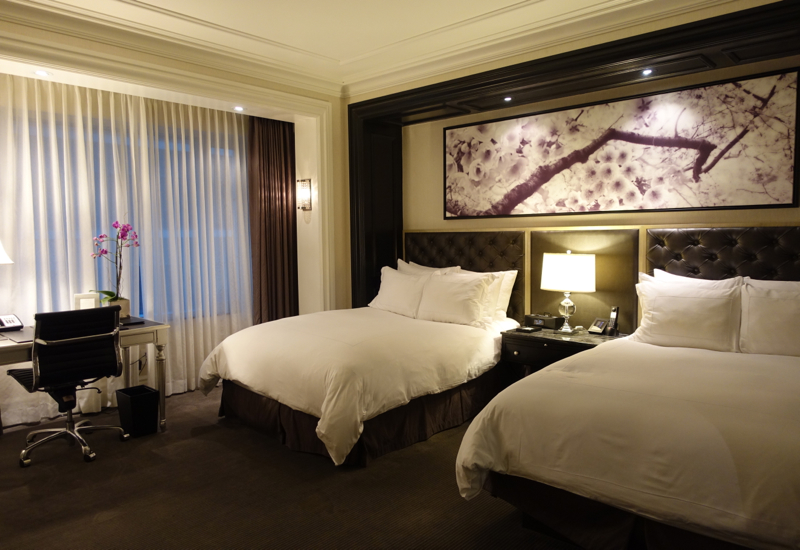 In addition to the uncomfortable beds, I wasn't impressed with my view of…another building. While the Trump Toronto site describes Superior and Deluxe rooms as having “floor-to-ceiling windows afford commanding views of Toronto's skyline” only the floor to ceiling windows aspect was true of my room. 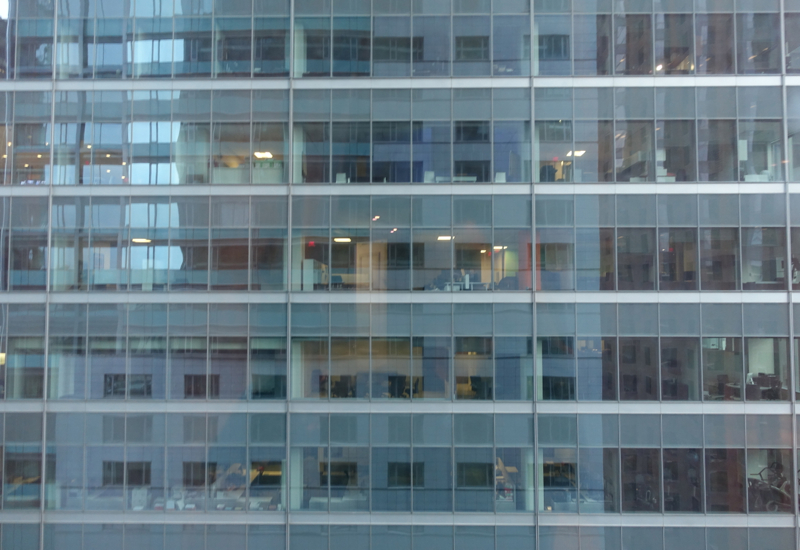 We did receive a very nice gesture at turndown: a box of chocolates and even some cute Trump candy bar chocolates. Very pretty, even if the chocolate quality was so-so. 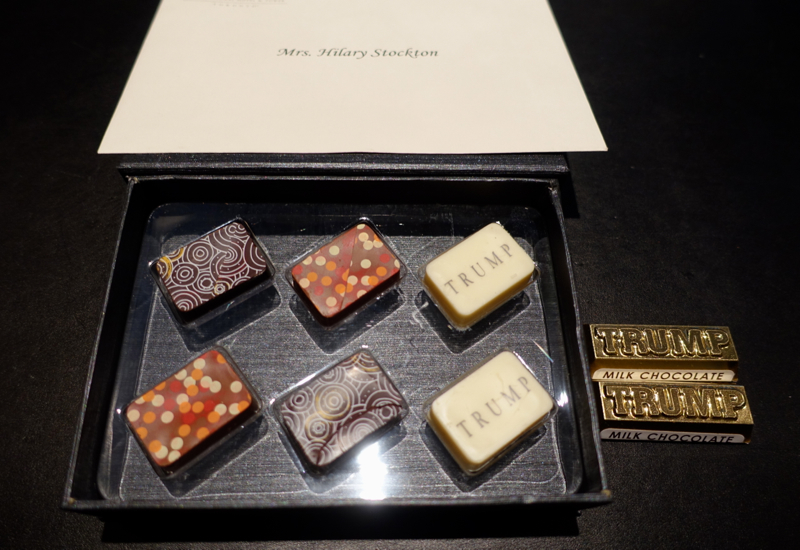 The Trump Toronto does have a nice heated saltwater lap pool on the 32nd floor, which is 65 feet long and provided some good exercise for my son and me. When we first arrived, there was no one in the pool, but the pool area was nonetheless quite noisy from the 6 adults partying in the jacuzzi whirlpool, wine glasses in hand.

After the partiers cleared out, we enjoyed a more relaxing soak in the whirlpool before heading to our room. 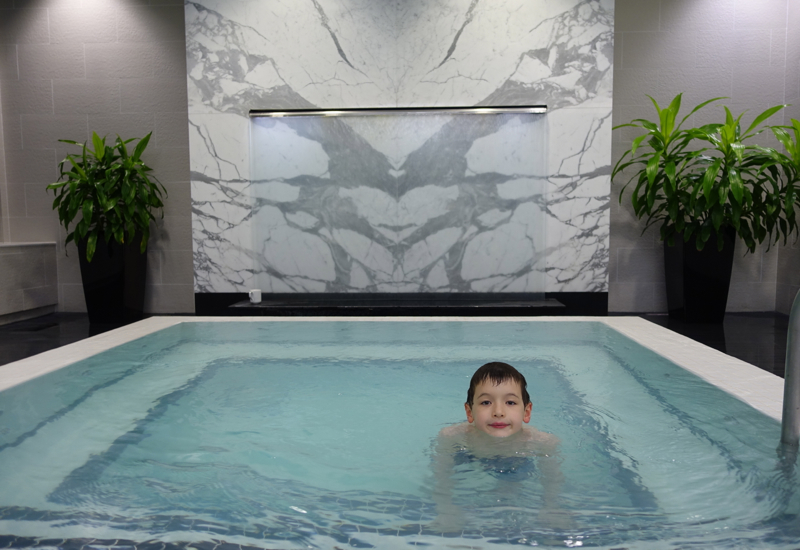 We were the only guests at America Restaurant when we arrived for breakfast at 8am. Admittedly, it was a Sunday, so presumably it's a bit more popular during weekdays, but it was a bit eerie to be the only ones in the long, high ceilinged space. 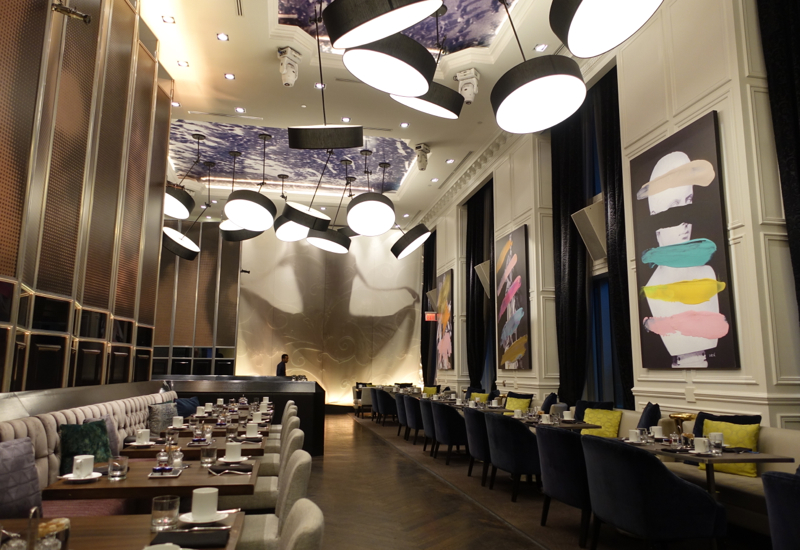 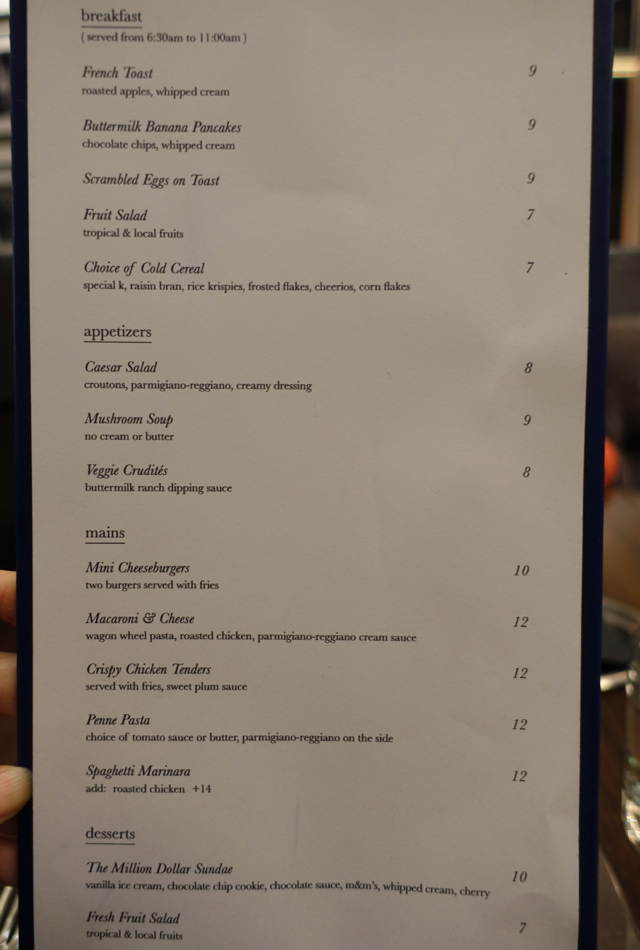 He decided to have a fruit bowl and plain Greek yogurt, since no fruit yogurt was available. I should have asked what was in the fruit, since it contained quite a bit of honeydew melon and cantaloupe, which neither of us like. 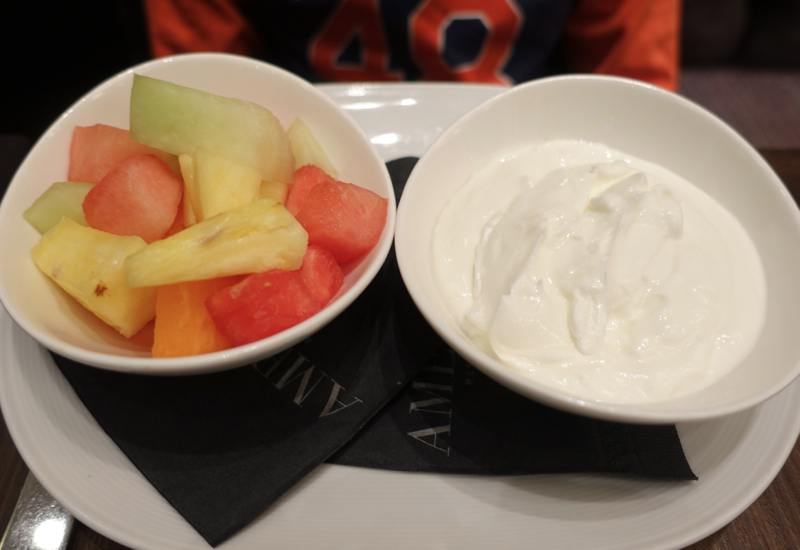 Originally I wanted to try the pancakes, but it turned out that the mix is prepared offsite and possibly contains something I'm allergic to. The kitchen was unable to make a version from scratch, so I settled for oatmeal, which I also shared with my son. The oatmeal was ok, and we especially liked the cooked apple in it. But to be honest we make better oatmeal at home. 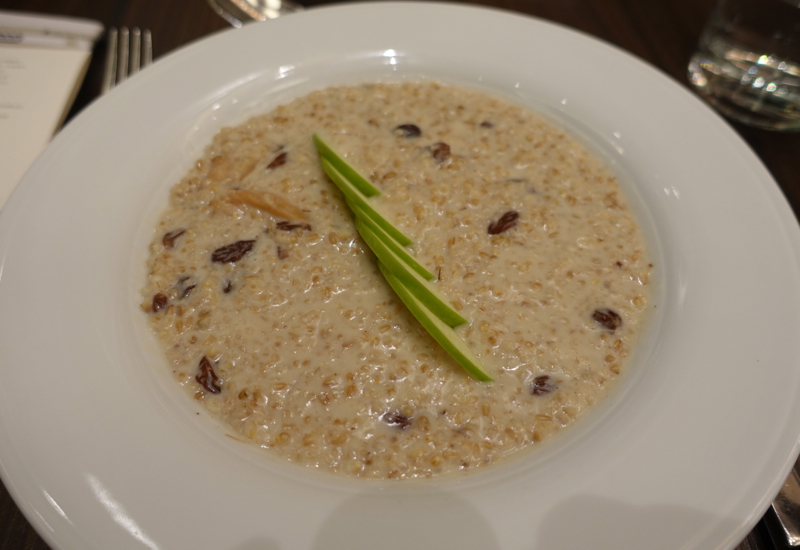 The Trump Toronto is very well located for anyone arriving with the UP Express from Toronto Airport, as we did, and is also very convenient to the 504 streetcar that we took back from the Beast Restaurant. It's also easy walking distance to the waterfront, which makes a nice stroll on a summer or warm fall day.

Our favorite aspects of the hotel were the hot towel on arrival, the swimming pool and jacuzzi. Our room was fine, especially the nicely appointed bathroom (except for the house branded bath products) but the uncomfortable beds are a dealbreaker for me, though fine for anyone who likes really firm beds. We didn't have enough food at America Restaurant to review it properly, but I do feel a hotel restaurant should be able to make pancakes from scratch given a guest allergy–pancakes can easily be made from flour, baking powder, egg, milk, and salt, nothing too elaborate.

If you've stayed at the Trump Hotel Toronto, what was your experience?

Disclosure: I paid for my stay with a travel professional rate.