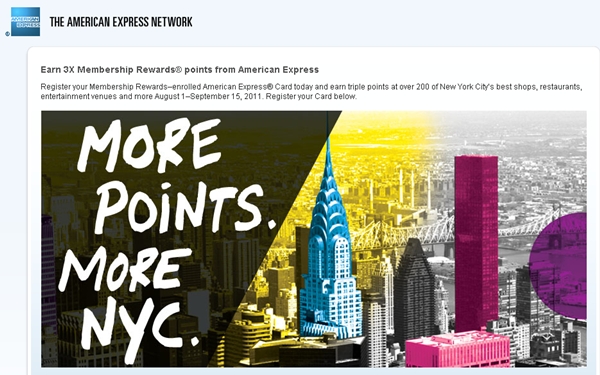 If you're a local New Yorker or visiting NYC over the next month, until September 15, 2011, you can earn 3x American Express Membership Rewards points for spend at select shops, restaurants and entertainment venues, including shows such as Cirque du Soleil and Wicked.

While I'm not overly impressed with the list of participating merchants, I do have a few favorites and places I plan to try:

Can't really get excited by any of the other dining choices; would save your NYC dining dollars for Michelin-starred restaurants via the current British Airways dining promotion $50 credit (up to $100) which we'll analyze soon.

I'll admit that unlike the stereotypical New Yorker, I allocate virtually $0 to clothes shopping. Over the years I've invested in a few classic pieces that never go out of style, and have no need to buy any more clothes or shoes beyond things that wear out, such as workout gear, sneakers, etc. If you're a guy that needs professional clothes, the one place I'd recommend from this list is Charles Tyrwhitt. I've bought these classically tailored British shirts for my husband a number of times, and they look so much nicer than the stuff you get at, say, JoS. A. Bank. The one caveat is that I've always bought online, and you only get 3X AMEX points for in-store purchases, so check online to make sure you're not overpaying.

Even after living here for years, I've only gone to a handful of theater performances, mostly plays. But if you've been wanting to see the new Cirque du Soleil show, Zarkana, or Wicked, both will net you triple points. My other picks in this category:

So those are my picks–if you're planning to take advantage of this American Express promotion, where are you headed?