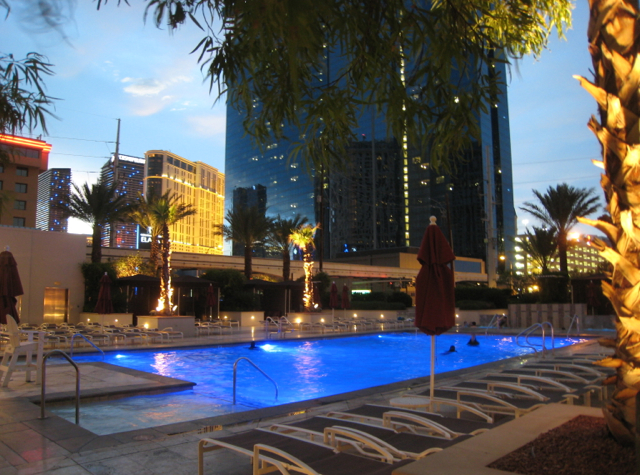 This Signature at MGM Grand Las Vegas review is one of several Las Vegas restaurant and hotel reviews. Other posts in this trip report include:

The Signature at MGM Grand is a Virtuoso property, so TravelSort Clients receive these Virtuoso benefits:

The Signature at MGM Grand is located at 145 East Harmon Avenue, so the entrance is off-strip. It was built as a condo hotel, with the 576 condos spread over three 38 story towers. Many of the owners rent their units via the hotel, when they are not in residence. The first of the towers opened in 2006, eight years ago, so as you'd expect, the interiors are not as modern or to as luxurious a finish as more recent openings, such as Encore at Wynn Las Vegas, let alone the Mandarin Oriental Las Vegas.

When I checked with the concierge at The Bellagio on possibly walking to The Signature at MGM Grand, he grimaced and said he wouldn't advise it–even during the day. I was a bit taken aback, but, since it's a fairly quick and inexpensive taxi ride from The Bellagio, where my meetings were, I took his advice and took the 5 minute taxi ride there. I didn't know which tower I'd be in, so the taxi driver dropped me off at the second tower.

I was able to check-in at the second tower's reception, even though it turned out I was in Tower 3–probably because I'd requested a strip view and quiet room. There have been reviews of significant noise if staying on one of the lower floors of Tower 1, on the side that faces Wet Republic, so I definitely wanted to avoid this to get a good night's sleep.

The associate checking me in was friendly, noted that I had been upgraded from a Signature Balcony Deluxe Suite to a Signature One Bedroom Balcony Suite, and explained the Virtuoso benefits. Interestingly, she did not mention the Joel Robuchon restaurants for the $100 dining credit, although they are explicitly mentioned on the Virtuoso Web site. And she volunteered that I was entitled to a $40 breakfast credit, even though the Virtuoso site states that it is $20 per person for up to two people, and I was alone on this visit. 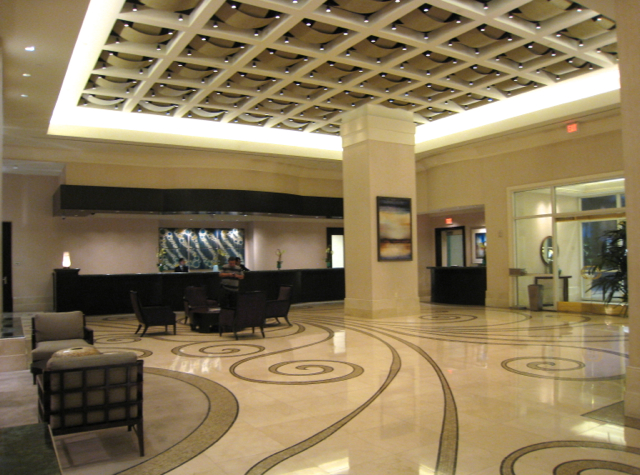 I was on the 35th floor of Tower 3 in a Signature One Bedroom Balcony Suite, which would have been perfect for a family, even though I was solo on this trip, for Virtuoso Travel Week. The door opened directly into a small dining area, with the living room beyond. The sofa is a sofa bed, and I only tried it out as a sofa, although have heard feedback that it's not all that comfortable as a bed. 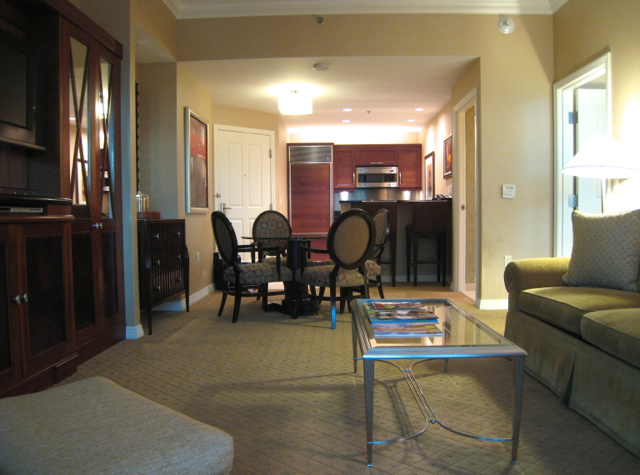 Immediately on the left was the kitchen, which included a full sized fridge (with two small bottles of water inside), a range, oven, microwave and coffee maker. If you actually intend to cook and dine in, however, you'll need to call housekeeping to request pots, pans, dishes and utensils. 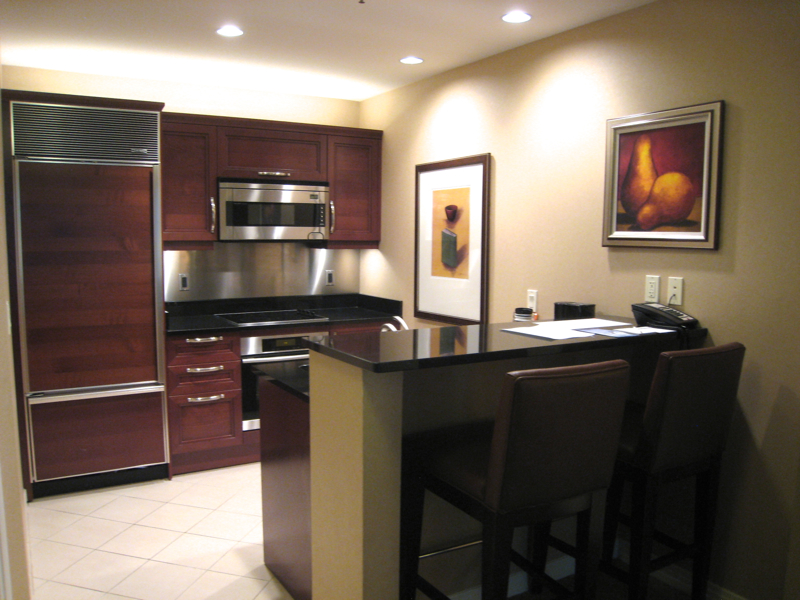 In the One Bedroom Suite there are two bathrooms, one of them next to the kitchen area. This is convenient when staying with family, since it's a full bathroom including sink, toilet and shower that can be used by the family members sleeping in the living room. 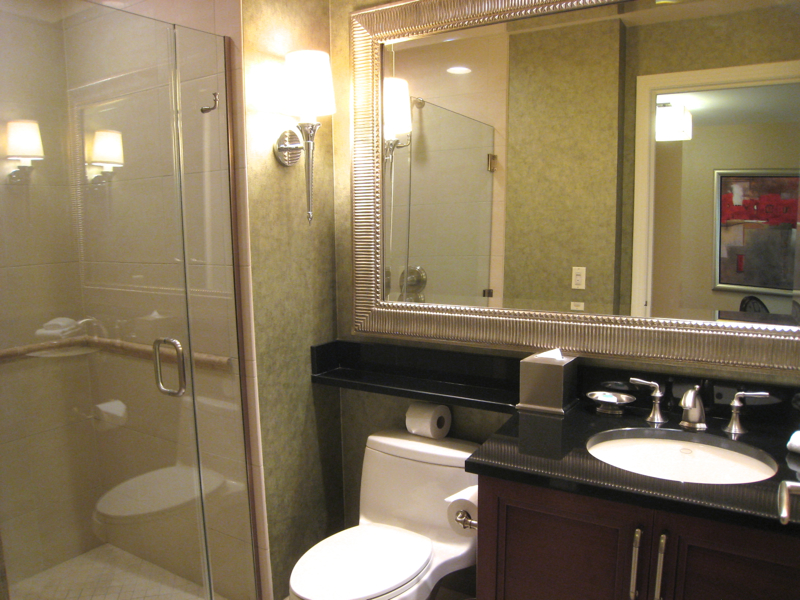 One thing to be aware of, if you're traveling with young kids, is the balcony. I personally would be nervous if staying here with kids that can unlock the sliding glass doors and step out onto the balcony. It did afford some nice sunset views, however. 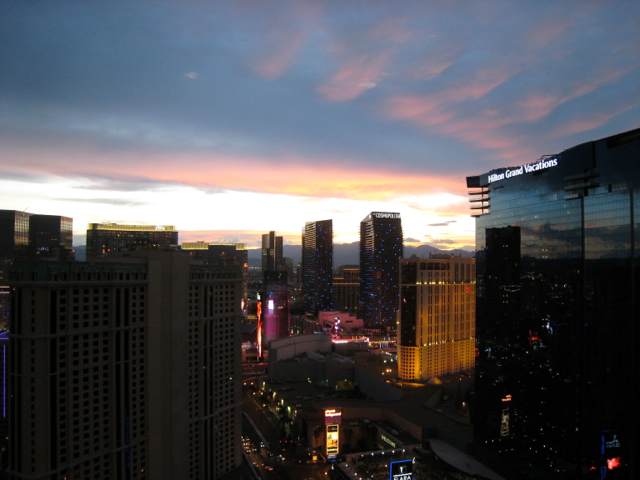 The bedroom is the corner section of the condo, so during the day it gets light from two sides. It's quite nondescript otherwise, however, as is the condo overall. All perfectly fine for the $100 per night price that I got (especially with the great value of the Virtuoso amenities that included a $100 credit at L'Atelier de Joel Robuchon and breakfast) but otherwise nothing to write home about. 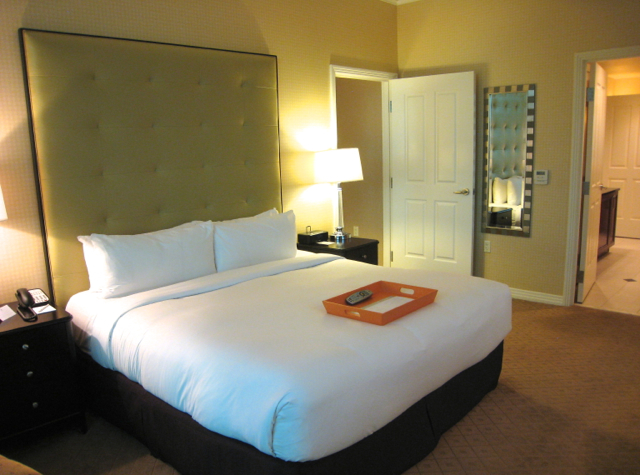 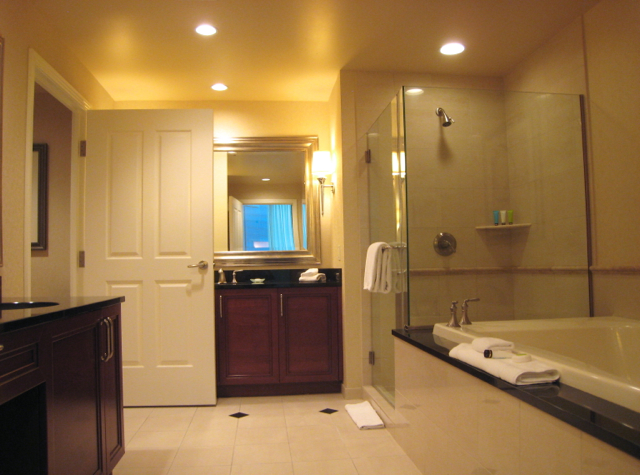 Bath products were La Firma, which I'd never heard of, and I preferred to use my own L'Occitane bath products that I'd brought with me. 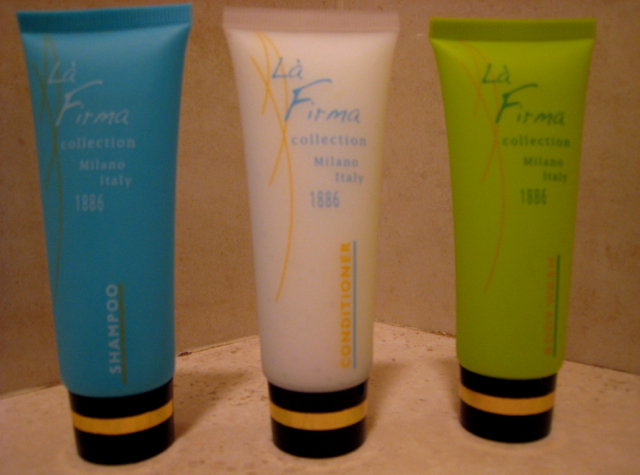 I got plenty of exercise just walking around Las Vegas and going to my meetings at The Bellagio, but if you somehow aren't getting enough exercise in Vegas, there's a serviceable fitness center: 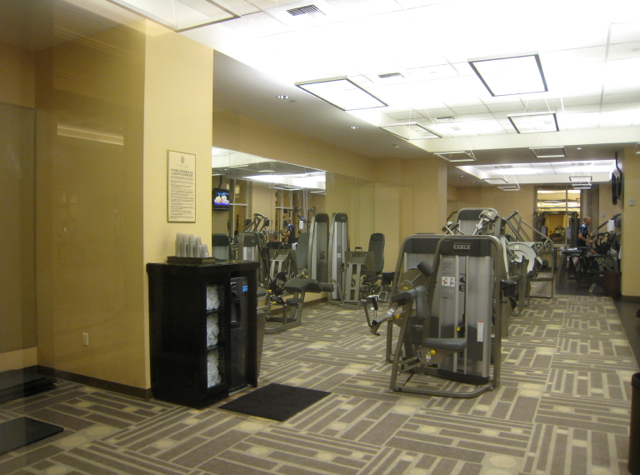 There's actually a private heated outdoor pool for each Signature tower, and you also have access to the MGM Grand pool complex, and as a hotel guest, can enjoy complimentary admission to Wet Republic day club on Fridays and Sundays until 2pm. Here's the outdoor pool and jacuzzi hot tub for Tower 3: 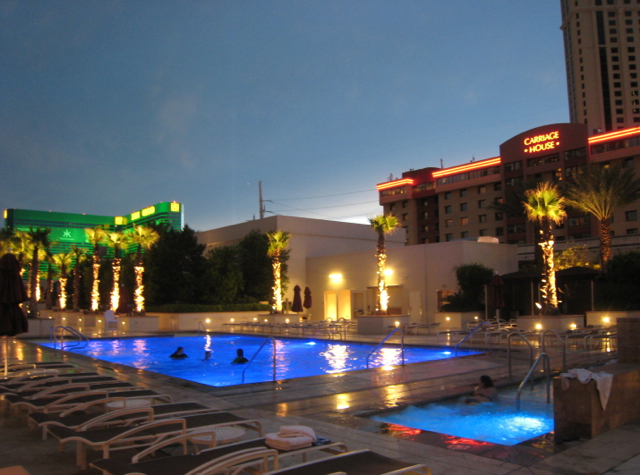 Most dining venues are in the MGM Grand, but if you stay with Virtuoso benefits at The Signature, your breakfast credit is only valid at Delights. I had serious doubts that it would be any better than a Starbucks in terms of the food, but I was pleasantly surprised how good the lemon raspberry pancake was: it was delicous and enormous–I'm pretty sure even the munchkin wouldn't have been able to finish it. 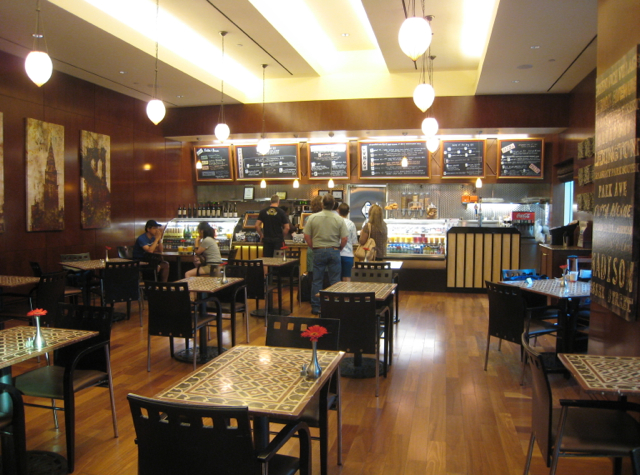 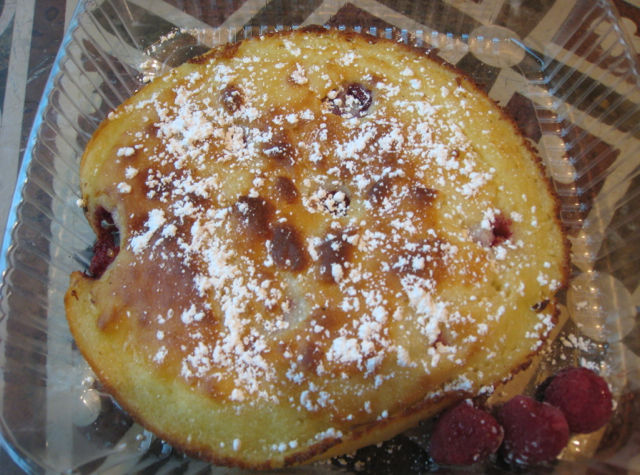 The Signature at MGM Grand is a bit of a sleeper–certainly newer properties have eclipsed it in terms of more modern and luxurious rooms with on-strip entrances. But of all the Las Vegas hotels I've stayed at, this was the best overall value due to the Virtuoso amenities and quality of the food I enjoyed, and the fact that I was gone all day at meetings. It wouldn't be my pick for a romantic couple's getaway or luxurious weekend, but it was perfect for a business stay that enabled me to enjoy $100 off a great dinner at L'Atelier de Joel Robuchon, and even a delicious and filling breakfast (with dining credit left over).

If you’ve recently stayed at The Signature at MGM Grand in Las Vegas, what was your experience?

Become a TravelSort Client and Book your Virtuoso hotel with Virtuoso Amenities!