Singapore KrisFlyer will make Star Alliance awards bookable online, but with an award chart devaluation. Here are excerpts of the announcement, which was emailed to KrisFlyer members today, along with which awards will increase the most.

“KrisFlyer members will be able to redeem miles for flights on Star Alliance and other partner airlines on singaporeair.com or via our mobile app from 7 December 2017.

At the same time, updates have also been made to redemption award levels for Star Alliance carriers and will take effect on the same day. Click here to view the new Star Alliance Award Chart.”

KrisFlyer also announced that, effective 12/7/17, it will charge $25 for offline (phone and Singapore Airlines office) assistance with award bookings, award ticket changes, award upgrades, and membership services. The fee will be waived for transactions that can't be completed online.

As is often the case, the good news is also accompanied by bad news: an award chart devaluation. Here's the current award chart. Click on it to view a larger image.

And here's the new award chart that goes into effect December 7, 2017: 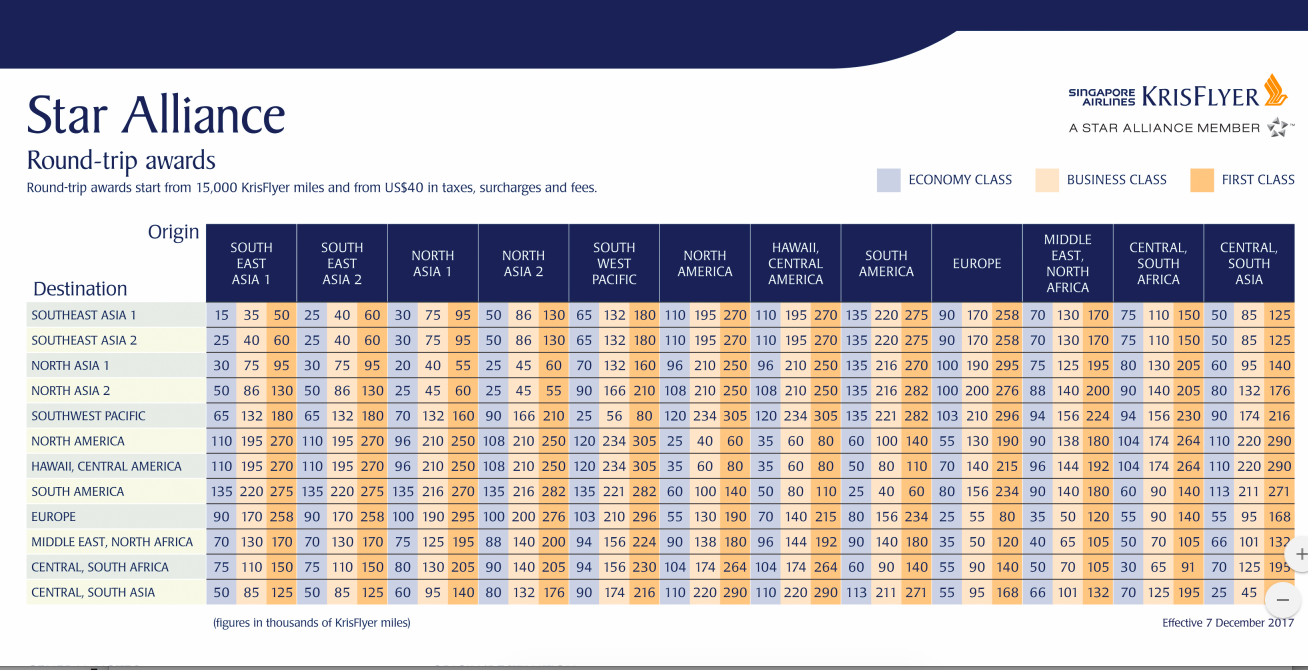 From a North America flyer perspective, the greatest increases are:

Currently the roundtrip price for this award is 200K KrisFlyer miles, but this will increase to 250K miles as of 12/7/17. To put this in perspective, American AAdvantage charges 110K each way for Cathay Pacific First Class from North America to Hong Kong, which is 10K more than the current KrisFlyer one way cost of 100K, but less than the future cost of 125K miles.

There are a number of KrisFlyer Star Alliance awards that will increase 20%:

North America to Europe in First Class also will increase 19%, from 160K to 190K. Since this equates to 95K each way, this is still better than United MileagePlus, which charges 110K each way for Lufthansa First Class, but much more than Aeroplan, which charges 70K miles one way for the same award.
One thing that's a bit weird is that KrisFlyer will now charge more for a North America to North Asia Award than for North America to Southeast Asia. So if you're just booking a one way award, there will be a perverse incentive for some folks to book ANA Business Class via Japan to Southeast Asia, and just disembark in Tokyo (at least if they have carry-on luggage only), throwing away the Japan to Southeast Asia ticket segment.
Then again, if you can book ANA First Class or ANA Business Class awards with Virgin Atlantic Flying Club miles, after using the 30% transfer bonus from AMEX, that's a far better deal. You do need to book ANA awards with Flying Club miles as a roundtrip, but after the KrisFlyer Star Alliance award chart devaluation it will be comparatively cheaper to book with Flying Club even if you can't use the return, as the Flying Club award cost for a roundtrip will be less than the KrisFlyer award cost for a one way.
Do you plan to book any KrisFlyer Star Alliance awards before the award chart devaluation?
Recommended Posts
A380 New Singapore Suites and New Singapore Business Class
Singapore KrisFlyer Award Chart Devaluation: Up to 30% More
Review: Singapore Airlines Business Class 777-300ER
Review: ANA First Class 777 New York JFK to Tokyo Narita