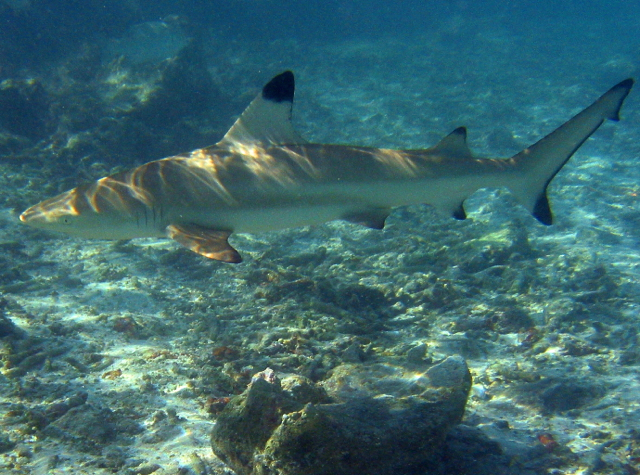 I never have considered myself an experienced ocean explorer. I have only gone scuba diving a few times, and though I really like snorkelling and know the names of many underwater creatures, I don't know much about their behavior.  Or more to the point, how such creatures respond to mine.

One morning during our recent trip to go diving and snorkeling at the Park Hyatt Maldives, I woke before my wife and son and decided to go for an early dawn swim.  I was aware that early morning is often he most active feeding time for many fish, including sharks, but I was only going to paddle around the house reef and so had no safety concerns.

At the Park Hyatt Maldives, I was delighted by the number and size of the beautiful reef-dwellers: the parrot fish, jack fish, trumpet fish — I even saw a large five-foot grouper lumbering along the ocean floor.  I was having a fantastic time, when in the distance I saw a shark slowly swimming toward me.

The visibility of the water in the Maldives is unbelievable.  You can easily see 50-75 feet away, and so I was enjoying watching this shark slowly approach.  I assumed that the shark would perceive me, and keep some distance, but at about thirty feet away the shark seemed to pause, and begin to swim directly at me, a little faster than before.

I was still not worried, but I began to wonder when this shark would swim away.  Thirty feet distance became twenty and then ten.  The shark was likely either a white or black-tipped reef shark, but at about six-feet long was big enough to cause my heart to start to race.  During this entire time, I had stopped swimming, and was treading water to let the shark see me and move away; instead, the shark came directly at my chest.

I had read years ago that in such situations the best way to avert an overly-interested shark is to punch, or bump, its snout.  So I made my hand into a fist, and as the shark continued straight at me, I lightly bumped its snout when the shark was about one foot away.  It was really more of a polite shove to get the shark to pass to one side.  The touch caused the very surprised shark to rapidly swim away.

I decided I was done with my swim, and returned to our villa to tell my wife about my shark encounter.  I did some searches on the Internet, and was comforted to find that there had never been a reported shark attack in the Maldives.

Later in my stay, I arranged to go snorkelling at night.  As I headed down the pier with the instructor, she gleefully informed me that we would likely encounter many sharks, but that everything would be fine so long as we kept moving, and made sure to keep our hands balled into fists and close by our sides, not waving them around in the water which the skarks might easily misperceive as tasty squid.  When I told her about my encounter she laughingly replied “Well, I guess you did everything wrong!”

Live and learn.  Now I feel a little guilty for having bopped the shark, who, after all, should not have been faulted for having thought my hands were yummy squids.

A few other facts and tips to help you stay safe where sharks are concerned:

In sum, my experience was highly unusual, so don't let it get in the way of enjoying amazing snorkeling and scuba diving in the Maldives. Do go with a guide or dive buddy though!
Related Posts
Maldives Scuba Diving and Snorkeling: What to See
Park Hyatt Maldives Review
Top Scuba Sites for Amazing Dives
Diving and Snorkeling at Nusa Penida and Nusa Lembongan Near Bali
Tips for Booking Award Tickets to the Maldives
Qatar Business Class and Economy Class Review, Doha to Male, Maldives