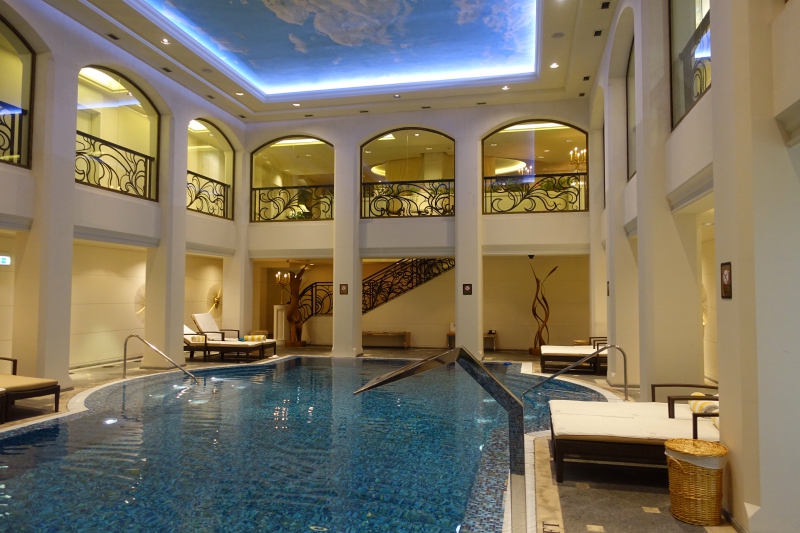 This Review of St. Regis Moscow Nikolskaya is part of a new Russia trip report that includes St. Petersburg. Visiting Russia? See all of our posts tagged Russia.

Alternatively, TravelSort can reserve the hotel with Fine Hotels & Resorts benefits for TravelSort Clients who are AMEX Platinum or AMEX Centurion card holders: 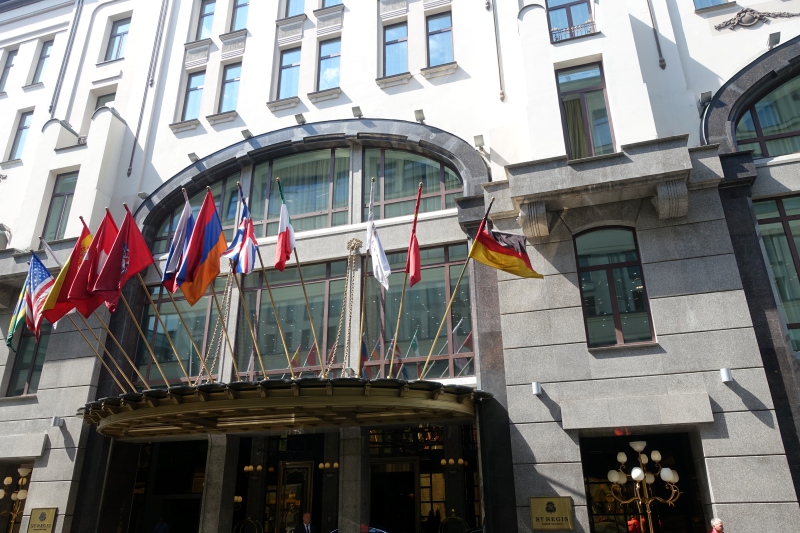 The St. Regis Moscow Nikolskaya is located at 12 Nikolskaya Street, right around the corner from Moscow Metro Station Lubyanka, and an easy 10 minute walk to Red Square. We had stayed the previous night at the Park Hyatt Moscow, which is just a 6-8 minute walk away. Note that the hotel's entrance is NOT on Nikolskaya; it's instead on Malyy Cherkasskiy Lane, which is where you'll see the flags.

We arrived fairly early, at 9am, to drop off our bags before meeting our guide, so our actual check-in was later that day when we returned. The front desk associate was friendly and polite and checked us in quite quickly. While checking in and also earlier in the day when waiting for our guide, we had a chance to observe the lobby and lounge area, which are done in a rather old-fashioned, fussy elegant way, even though the hotel itself opened in 2014, after a complete renovation of the building, a former Moscow apartment building owned by Count Alexei Orlov-Davydov in the late 19th and early 20th centuries. It's not to my personal taste, but no doubt it appeals to some. 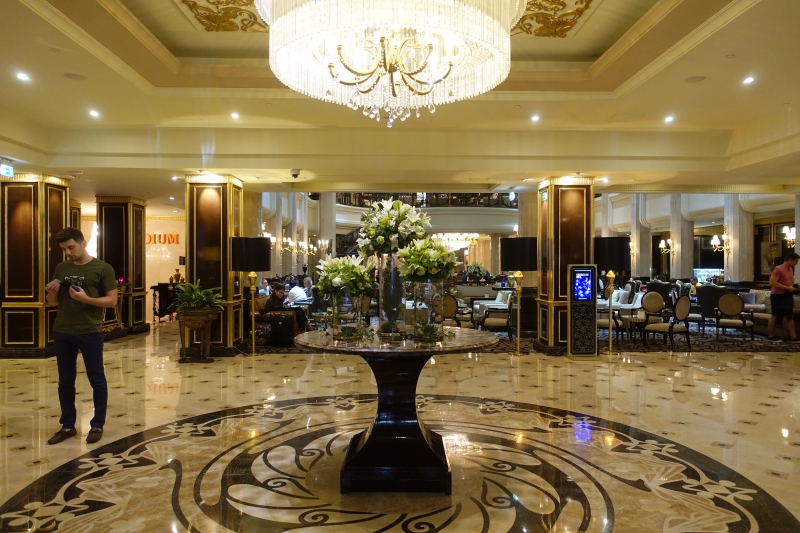 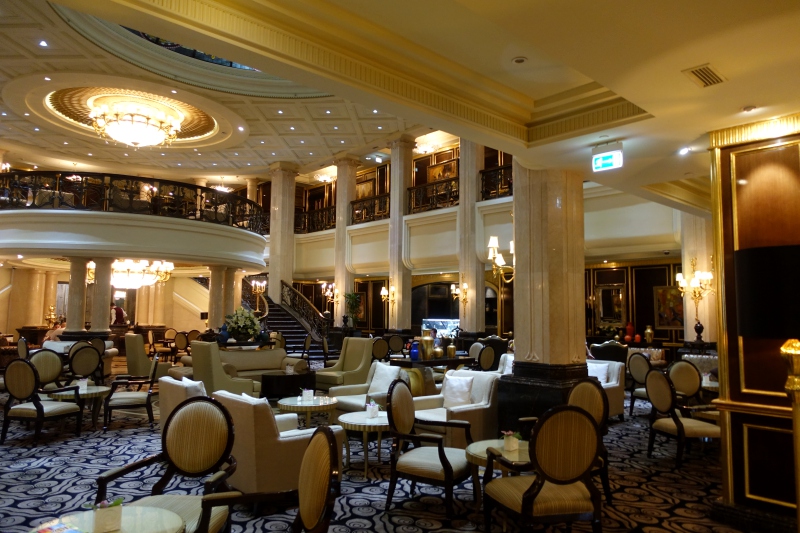 At check-in I mentioned that we preferred a quiet room, so our Superior Room overlooked the hotel's interior courtyard and was indeed quiet. It even had a small Juliet balcony, although we were out and about much of the time and didn't use it. 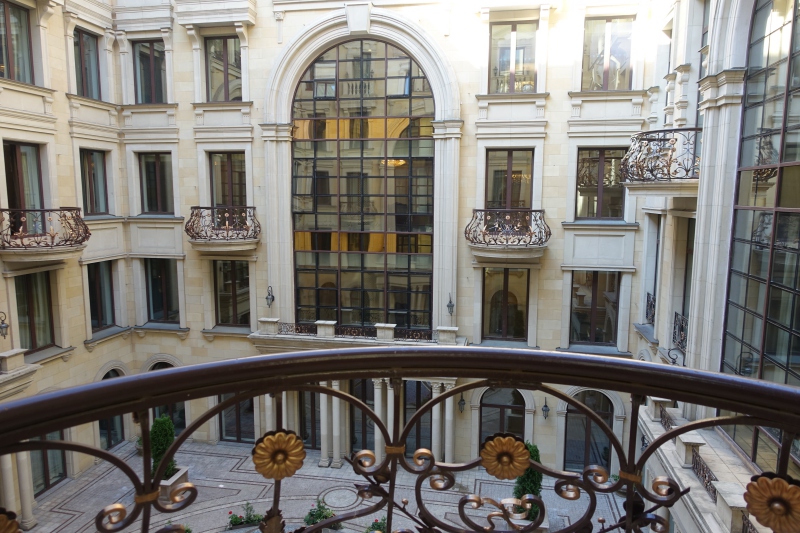 The room had an interesting configuration, in that there was a small alcove where the work desk was. There were plenty of windows, although since housekeeping failed to turn up for turndown service, I found it a bit cumbersome to have to undo each and every curtain tye to close the curtains, since there's no automated blackout drapery as there is at the Park Hyatt Moscow. 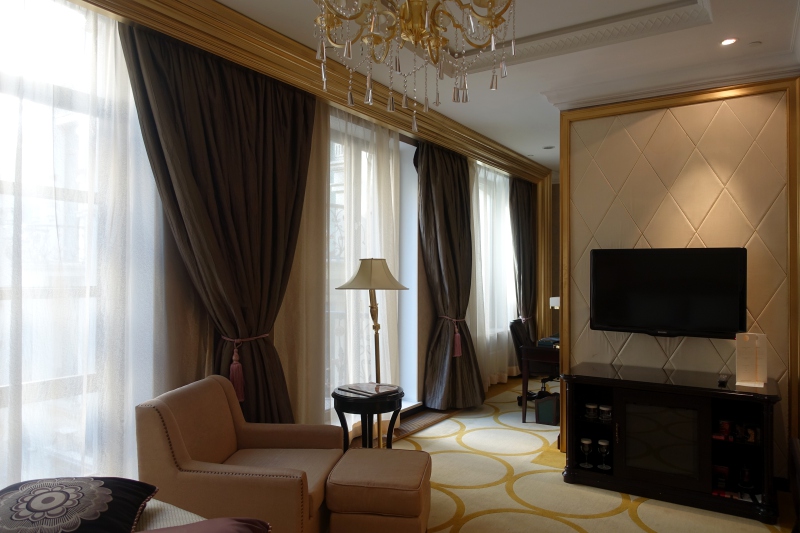 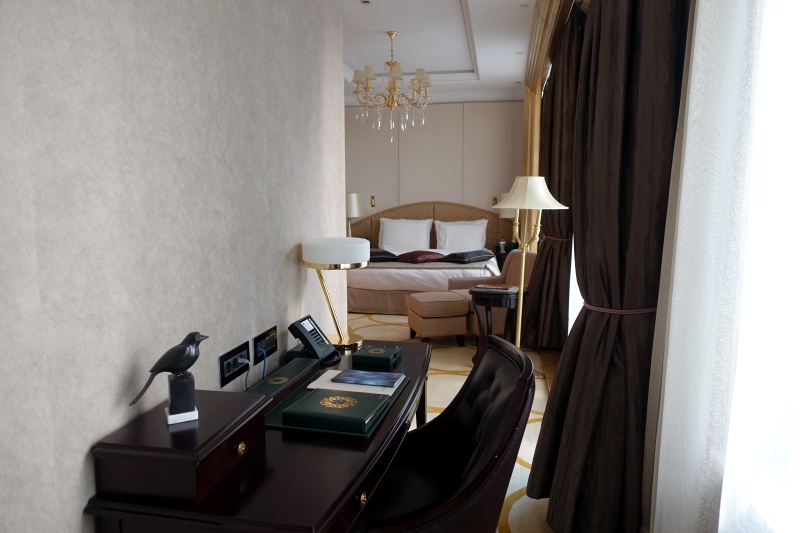 The St. Regis Moscow's ornate decor continued in the room, especially the bathroom, with its gold fixtures. If Donald Trump were to open a Trump Hotel in Moscow, this is what the decor might look like. There was a single sink, a deep bathtub, and a separate glass enclosed rain shower. As at the Park Hyatt Moscow, the toilet was part of the main bathroom, and not separated in its own chamber, as it is at the Four Seasons Moscow. 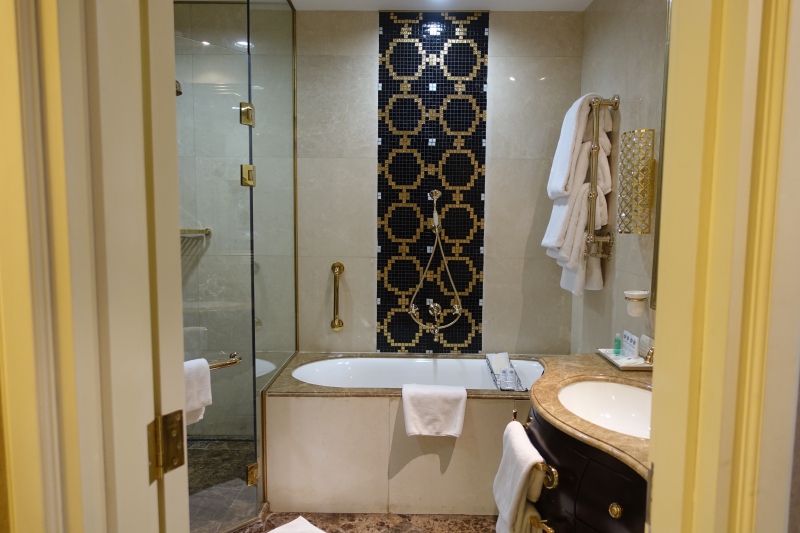 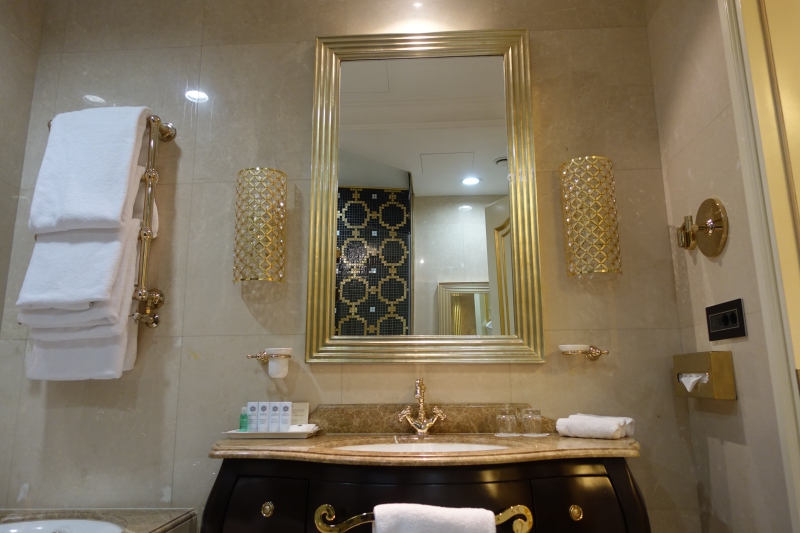 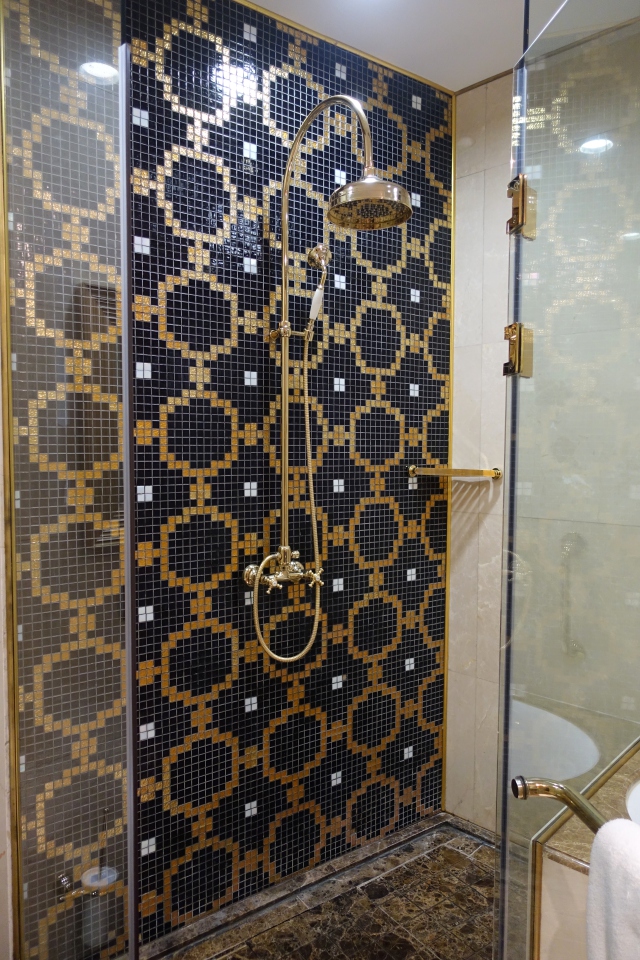 As usual for the St. Regis, there are Remede bath products, which are far from my favorite, but I travel with my own toiletries in any case. 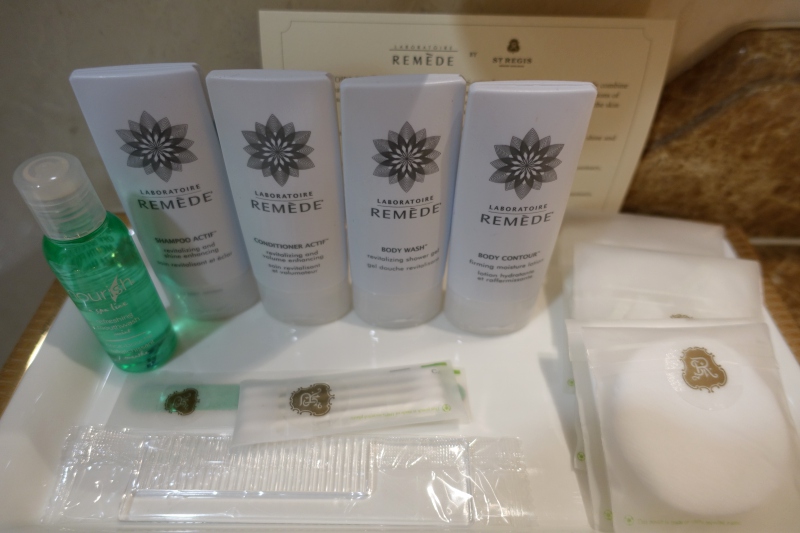 Bathrobes and slippers were in the closet: 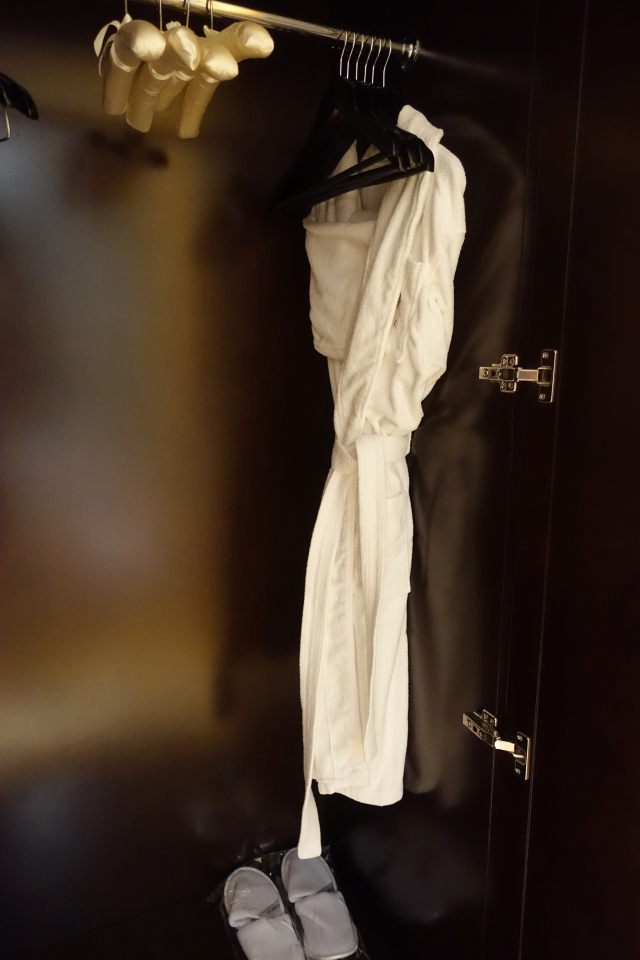 Fortunately the King bed was a bit more comfortable than the hard bed at the Ararat Park Hyatt Moscow and I slept better at the St. Regis Moscow; it still has nothing on the new Four Seasons bed, however, which is in all rooms at the nearby Four Seasons Moscow. 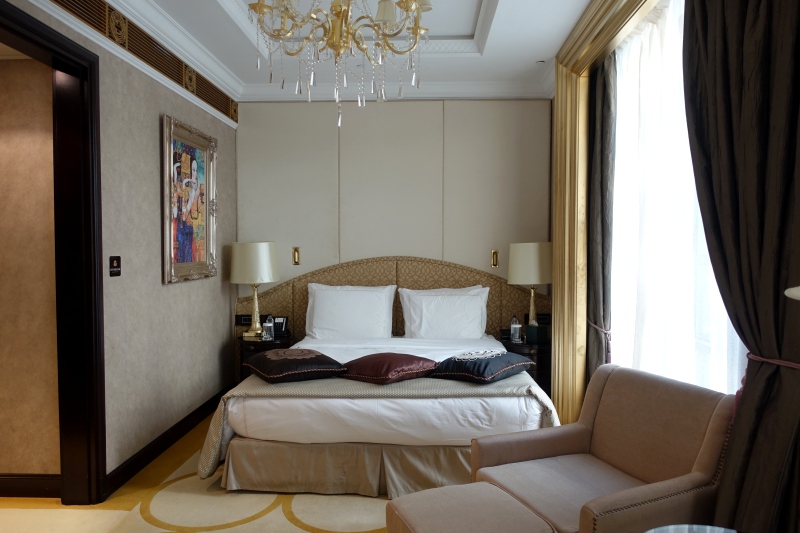 The Iridium Spa, fitness center, and swimming pool are on a lower level, beneath the interior courtyard, so unfortunately there are no skylights over the pool, as at the Park Hyatt Moscow, much less the gorgeous atrium over the huge Four Seasons Moscow pool. The ceiling is instead painted with a sky mural. There are several lounge chairs on each side of the pool, and also a jacuzzi at one end, although as with all hotel jacuzzis in Russia, it's just warm, not hot. 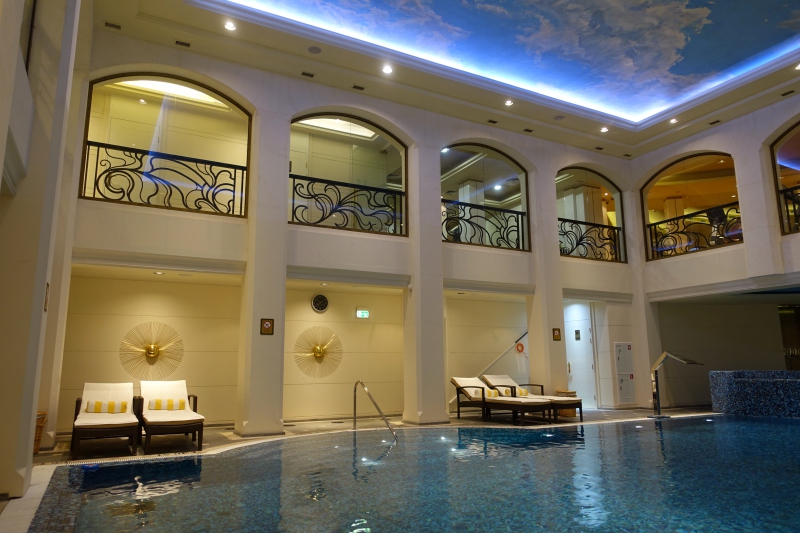 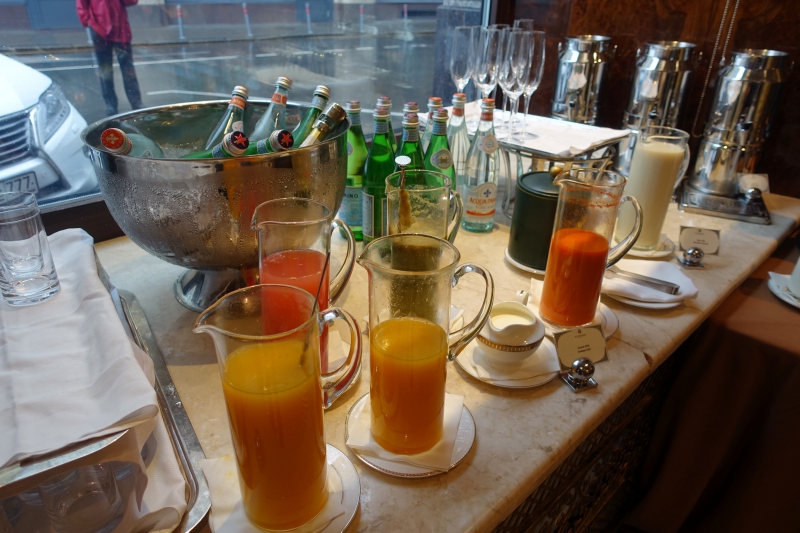 The cut fruit was a bit on the weak side: some unripe and under-ripe fruit was offered, although the cherries at least were very good. 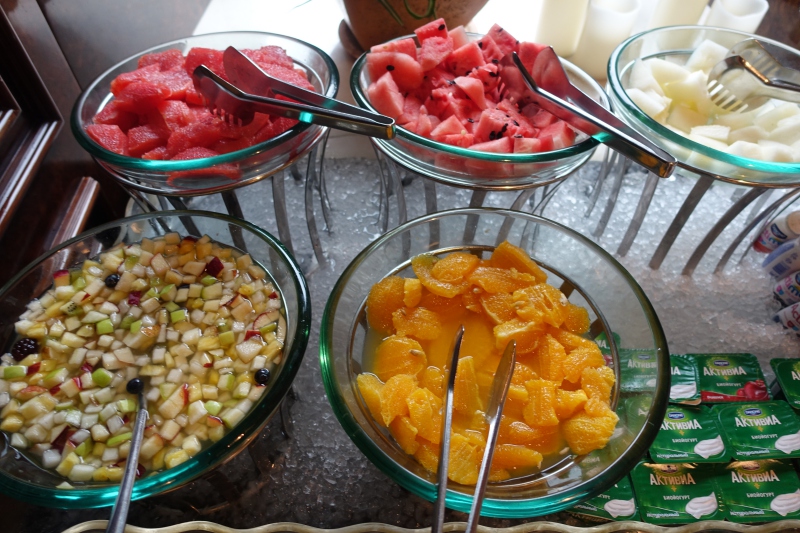 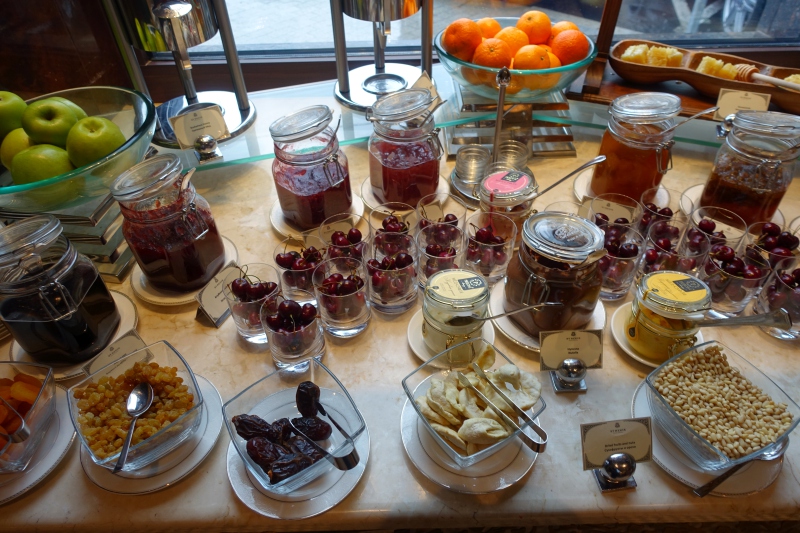 Various cold cuts and cheeses, as well as smoked salmon and even unagi (Japanese barbecued eel) were on the cold buffet. 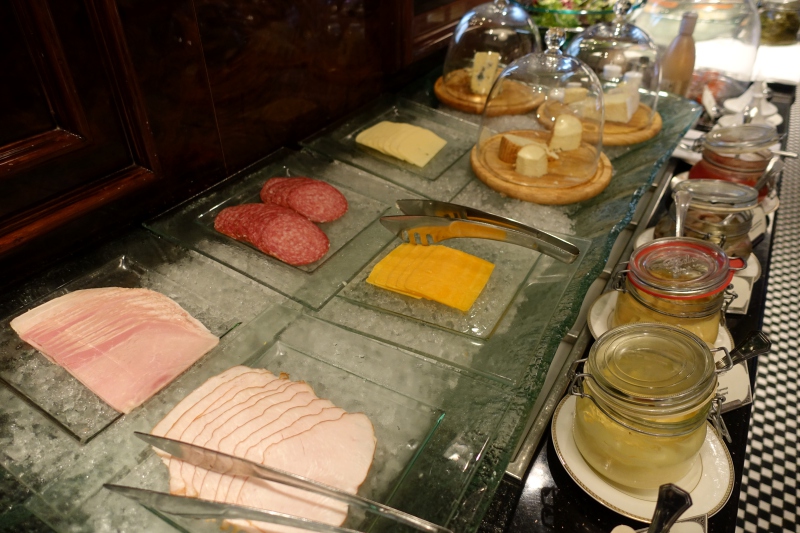 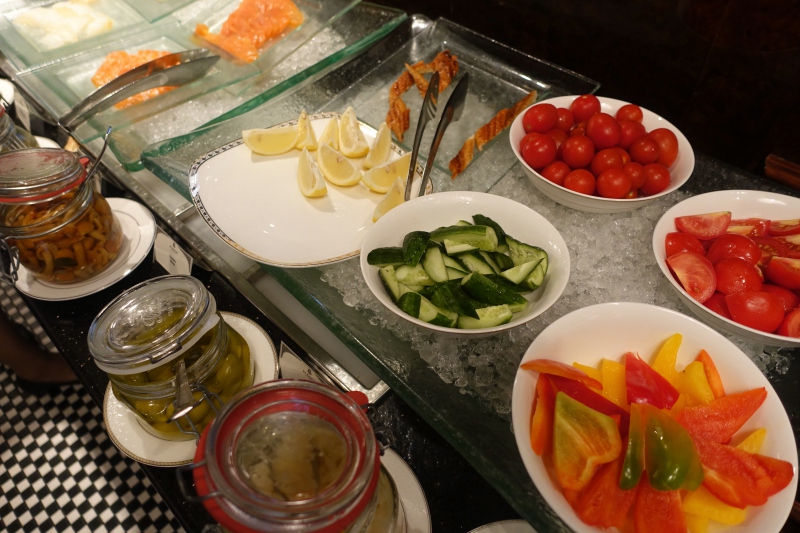 The hot buffet was ok, although several of the eggs benedict had burnt toast. 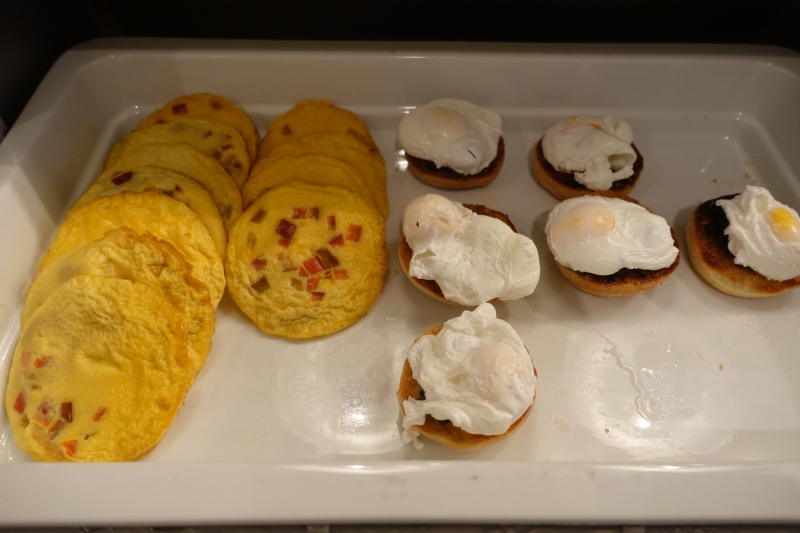 The highlight of the hot food, for me at least, were the blini (which I paired with smoked salmon and red caviar) and the syrniki (farmers cheese pancakes) which I added raspberry jam to. 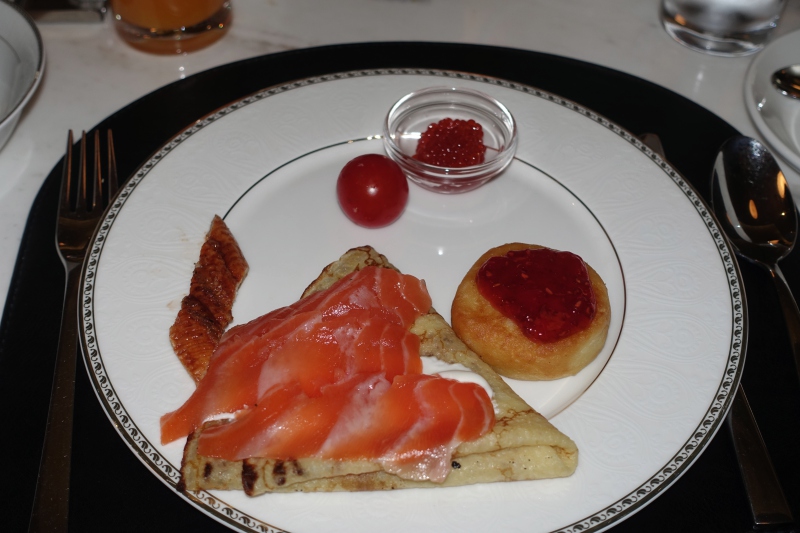 Yogurt was also on the weak side–no homemade yogurt, and while Dannon Activa yogurt in Russia is better than Dannon yogurt in the U.S., it's inferior to better, artisanal Russian yogurt and yogurt drinks. 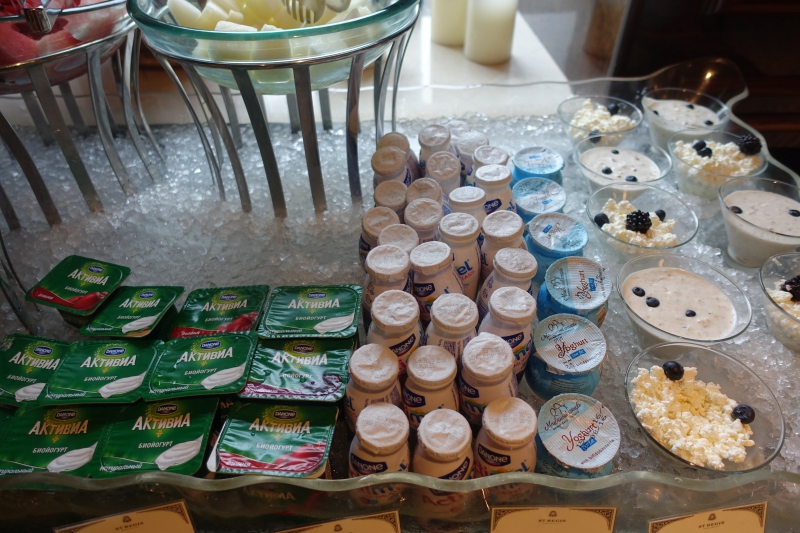 There was honeycomb, a Russian favorite, which is available at most better luxury hotel breakfast buffets. 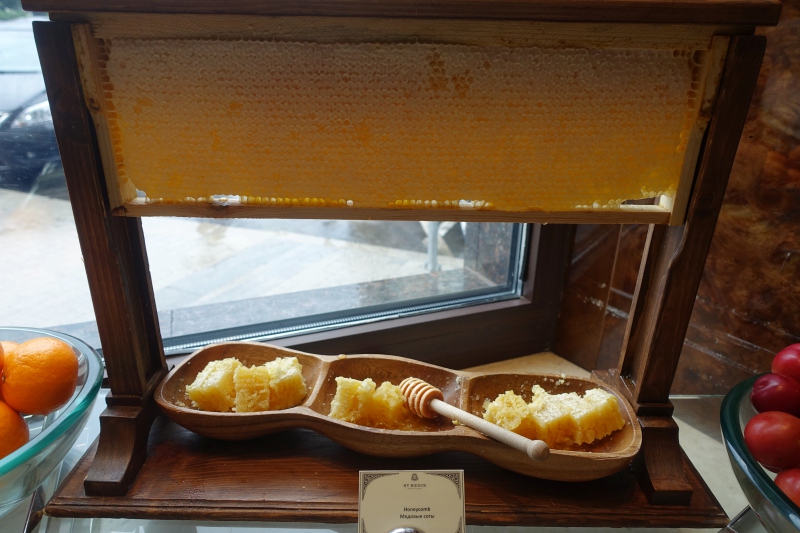 The St. Regis Moscow Nikolskaya is convenient to Red Square and the Bolshoi Theater, but no more so than the Park Hyatt Moscow, and lacks the Red Square views and location of the Four Seasons Moscow. Its design is bizarrely old fashioned and gaudy for such a new hotel, which I don't think will age particularly well. We had a good night's sleep, which was much needed after the Park Hyatt's hard bed the night before.

Service was good at check-in, but there was no turn down service, and I found the card keys frustrating: twice they stopped working, necessitating trips back to the front desk, and recoding didn't seem to work such that eventually we had to be given entirely new card keys.

The breakfast buffet was decent, and I was happy to see syrniki, unagi, red caviar and blini and good fresh squeezed juices offered, although much of the hot buffet and the yogurt selection were disappointing.

If you've stayed at the St. Regis Moscow Nikolskaya, what was your experience?

Disclosure: I paid for our room with a travel professional rate, that included breakfast. The views expressed in this post are mine.