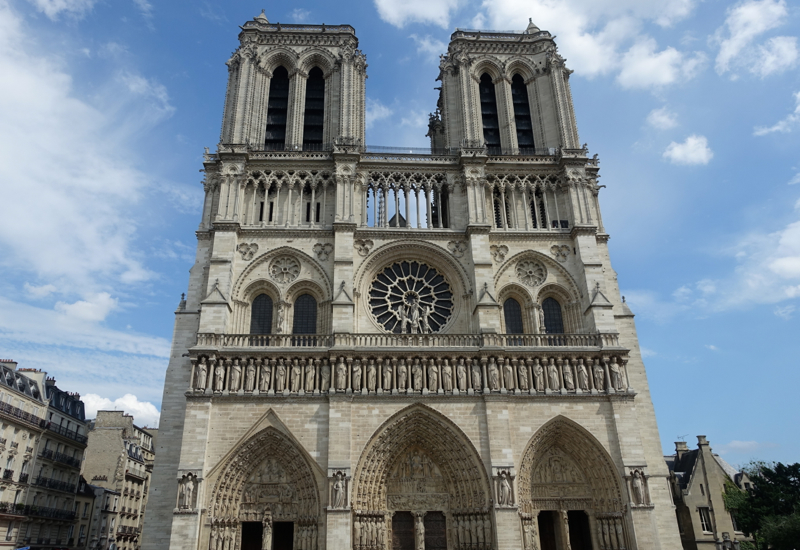 Paris is a great place to explore by foot, and Paris Muse Private Walking Tours include several family-friendly walks including the Paris Discovery Walk, which we were fortunate to be able to experience with Raquel Granda as our guide. Raquel is originally from NYC but is a certified French national tour guide, has lived in France for over 12 years, over 6 of them in Paris, and is married to a Frenchman, so she can speak to cultural questions you may have, beyond her trove of historical and architectural knowledge.

This Paris Muse walking tour review is part of a recent Paris visit. For the prior Paris posts, please see:

Paris Muse has several family-friendly walking tour options to select from, depending on your kid's interests:

Don't have kids? Paris Muse also offers private walking tours just for adults, such as its Montmartre tour, Historic Heart of Paris Walk, Inventing Modern Paris walk, and Marais walk. And Paris Muse also shines when it comes to in depth private tours at the Louvre or Musee d'Orsay.

Preparing for Your Paris Muse Walk

If you're going on the Paris Muse Discovery Walk outdoors in summer, as we did, make sure to bring water with you, a sun hat, and apply sunscreen or wear sun-protective clothing. It was very sunny and warm, and you're outside for two hours, in our case in the mid-afternoon. And as always with walking tours, make sure that both of you are wearing comfortable shoes or sneakers and that your and child (and you) are well rested and have eaten prior to the walk.

To avoid any stress about getting to your meeting place in time, I recommend leaving plenty of time and taking the Paris Metro. I almost always prefer the subway to a taxi anyway, but particularly in cities such as Paris where traffic can be gridlocked at almost any time of day, the Paris Metro is usually far faster and more reliable.

Highlights of Our Paris Muse Walk

As I mentioned, our Paris Discovery Walk incorporated Notre Dame due to protests and security / bag checks going on in the Marais, where the walk usually takes place. But as it's a private walk, you could likely ask to combine elements of both walks as well.

Here's what we particularly enjoyed:

Notre Dame Cathedral is of course gorgeous inside, but the exterior facade is just as impressive. Since my son loves building, we spent some time discussing the flying buttresses that support the cathedral's height while also permitting the large stained glass windows. 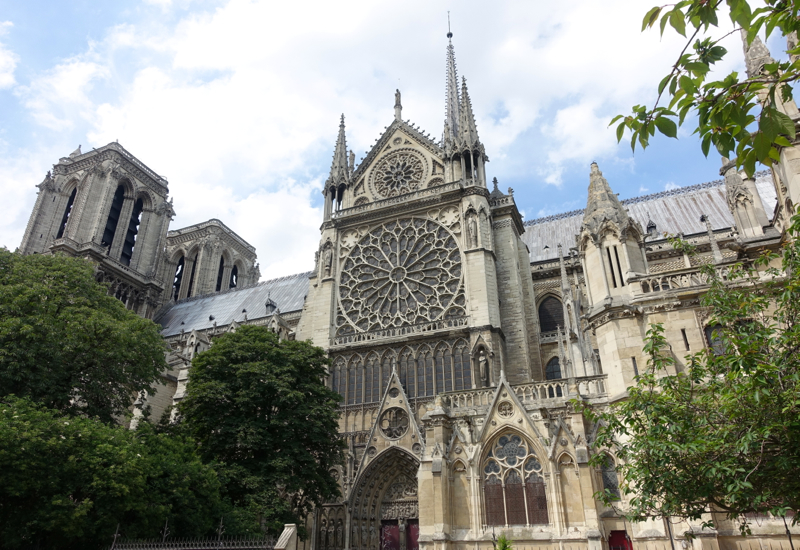 There was a line to enter, but it moved very quickly, allowing us to notice the sculptural detail on the Western facade as we got closer to the entrance. 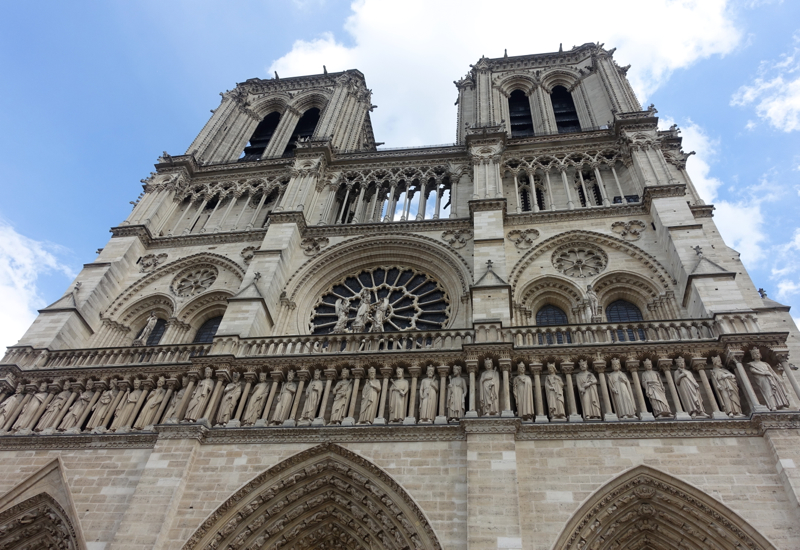 And after our visit inside the cathedral, we returned to look more closely at the sculptures, including the one of Saint Denis carrying his own head–as Raquel explained, legend has it that he was beheaded at the very spot that the Sacre-Coeur now stands, and that he picked up his head and carried it to where the Basilica of St. Denis now stands, and where many kings of France are buried. 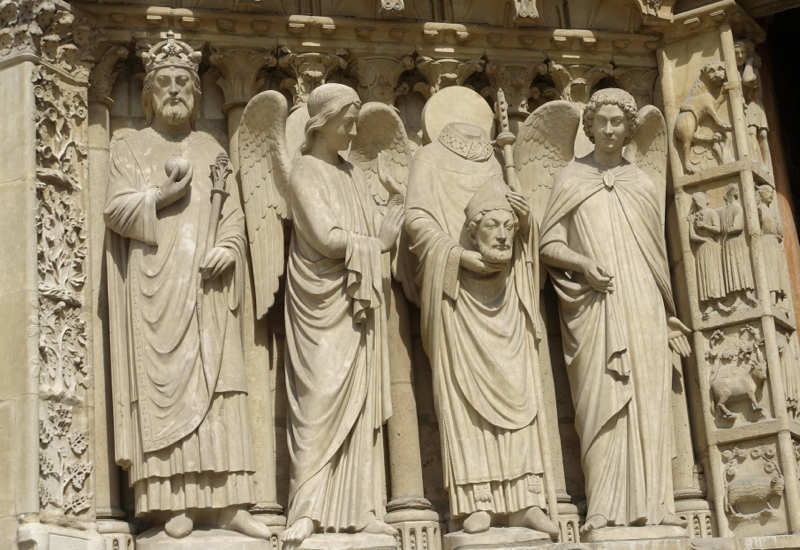 We also searched for St. Peter, whom you can see to Jesus' right, holding a key: 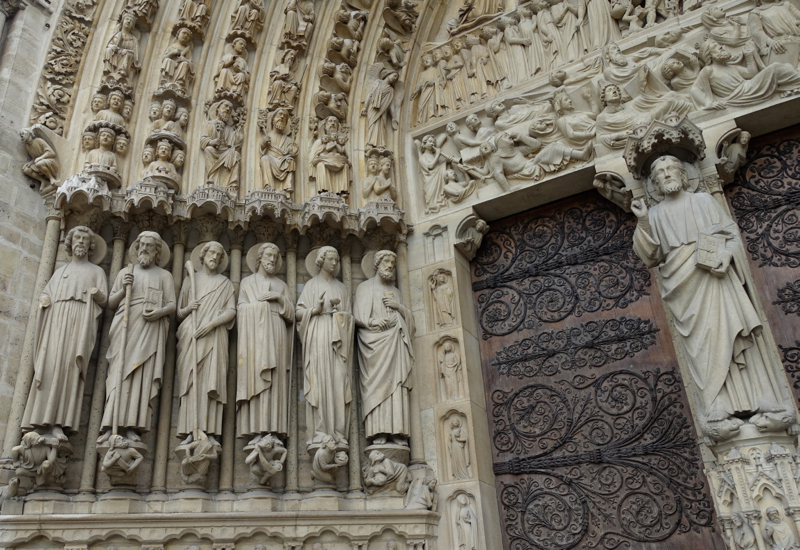 He wanted to know what all the lit candles were for, which he saw some visitors lighting: 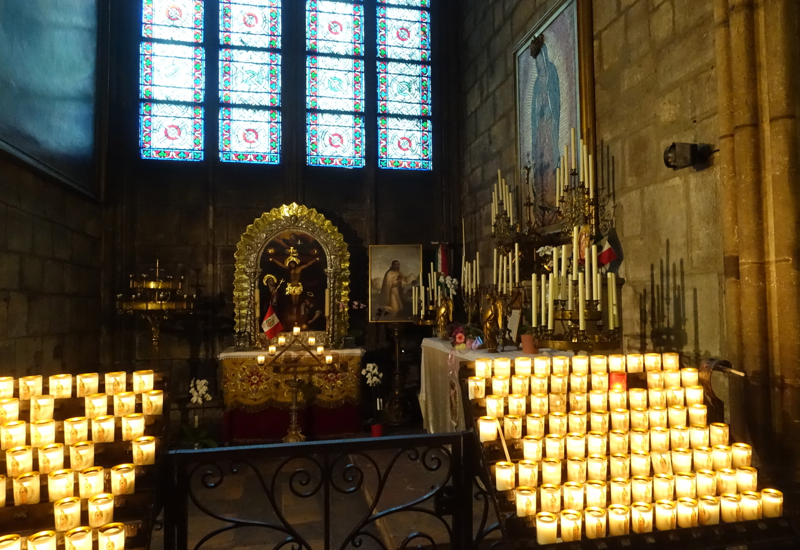 As he's becoming interested in military history, he was also curious about Joan of Arc / Jeanne d'Arc, who is credited with helping lift the Siege of Orleans and leading the French to victories during the Hundred Years' War and the coronation of Charles VII. 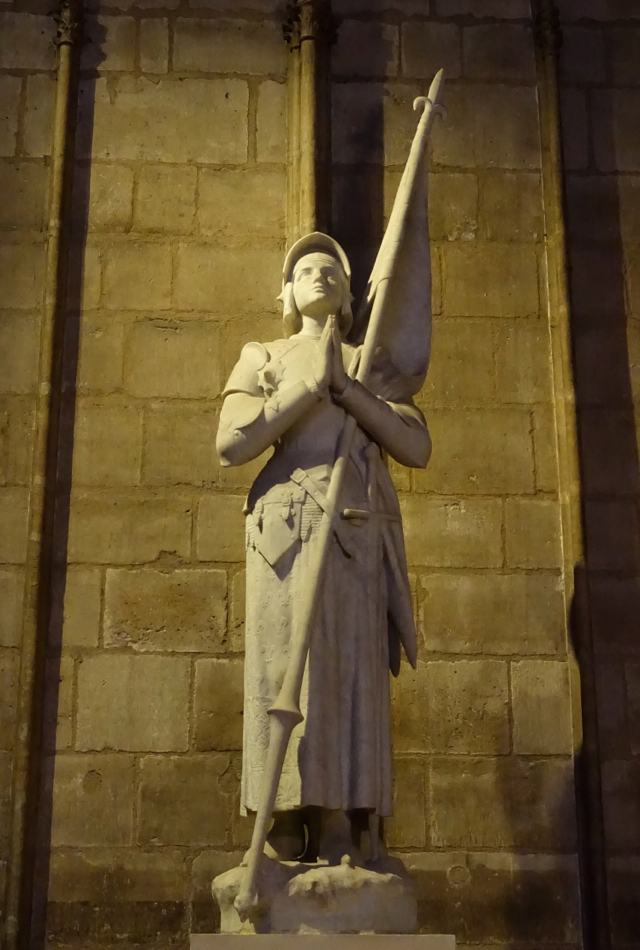 I never tire of the beautiful stained glass, such as the Rose Window: 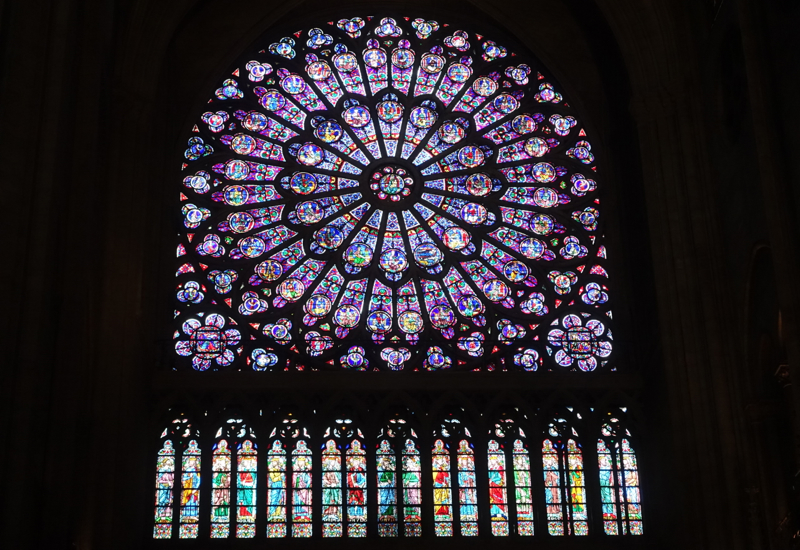 On our way walking from the Marais to Notre Dame, we couldn't resist a stop on Ile Saint-Louis for Berthillon ice cream and sorbet. It's hard to think of a tastier way to refresh during a hot day: 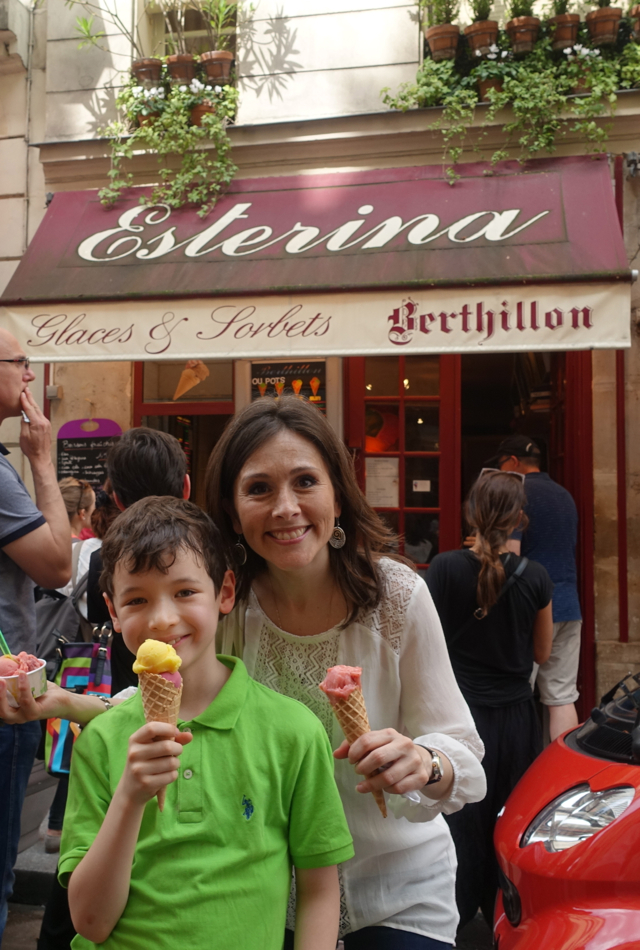 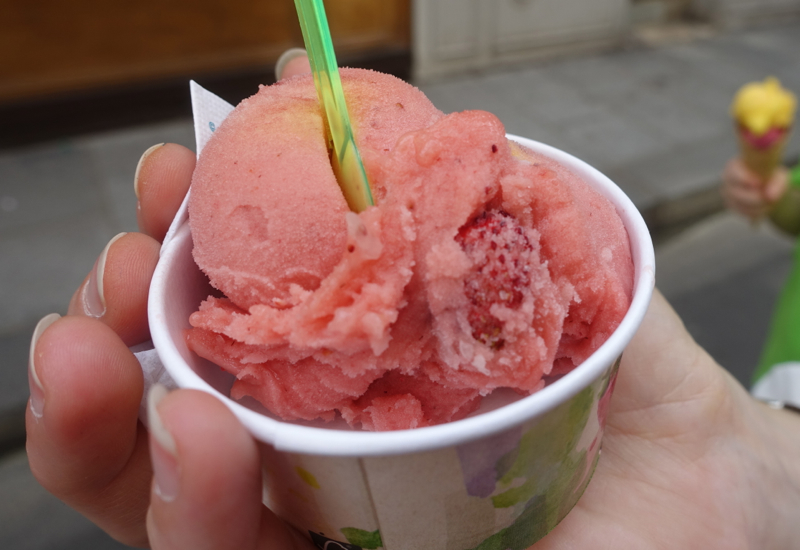 A great way to approach Notre Dame is from the East, with a stop in Square Jean XXIII. It's a small but peaceful park, and perfect for some shady respite from the heat, as well as a chance to finish our Berthillon sorbet before entering the cathedral. 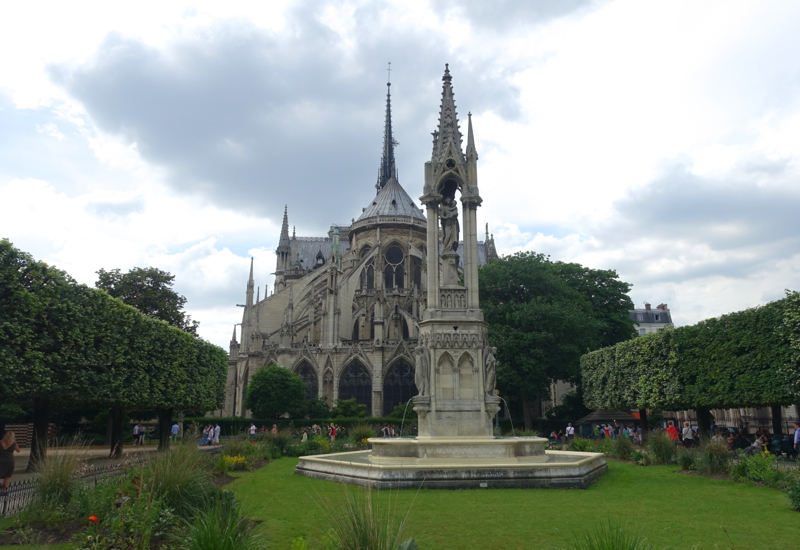 5. Figuring Out the Roman Numerals on a Marais Fountain

Paris Muse provides a fun interactive activity book for kids to engage them in what they're learning about and seeing. My son knows Roman numerals better than I do, thanks to his interest in math, so while he already knew all the Roman numerals except “D” which is 500, I learned both that one and that “L” is 50. 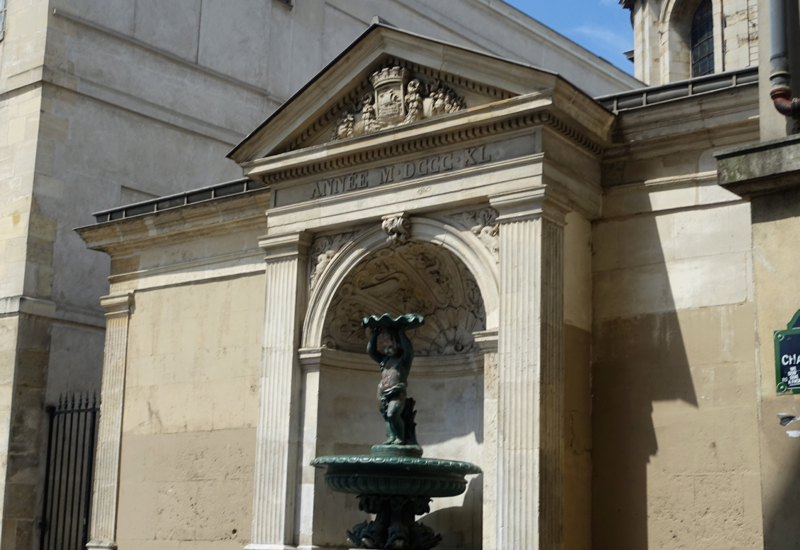 We met Raquel at Place des Vosges, built by Henri IV for the 1612 wedding celebration of his son, Louis XIII and Anne of Austria (who in fact was Spanish). The southern side is the Pavilon du Roi, or King's Pavilion, and the triple arches are matched on the northern side with the Queen's Pavilion. Many future European grand squares were modelled on Place des Vosges, with its appealing symmetry of all the buildings flanking the square. 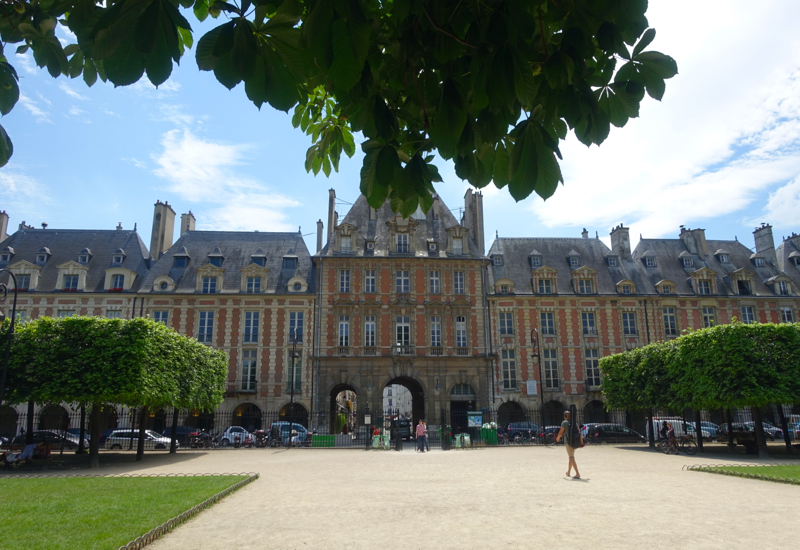 The equestrian statue of Louis XIII dated 1825 in the center is not the bronze original, which was melted down during the French Revolution. 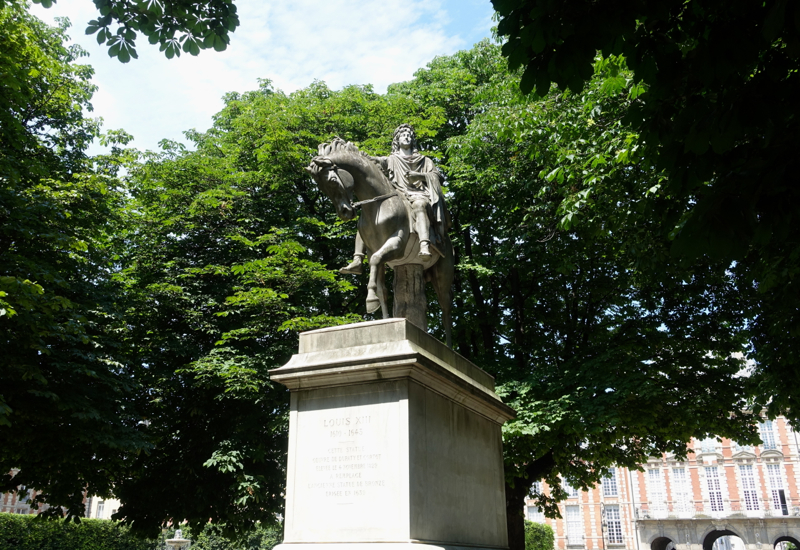 7. The Origin of “Take the High Road”

As we walked along the cobblestone streets, most of which had a lower center portion, Raquel explained how our common expression “take the high road” arose. Before the days of indoor plumbing, all kinds of wastewater were thrown from houses out the window, after a suitable warning was uttered to passers-by below. This waste flowed along the lower middle part of the road, hence the higher parts of the road were desirable, in terms of keeping out of the muck.

8. Seeing the Remains of an Ancient Marais Church

You can often see older buildings right next to modern developments, but it's more unusual to see the remains of an old church that are an integral part of a newer building: 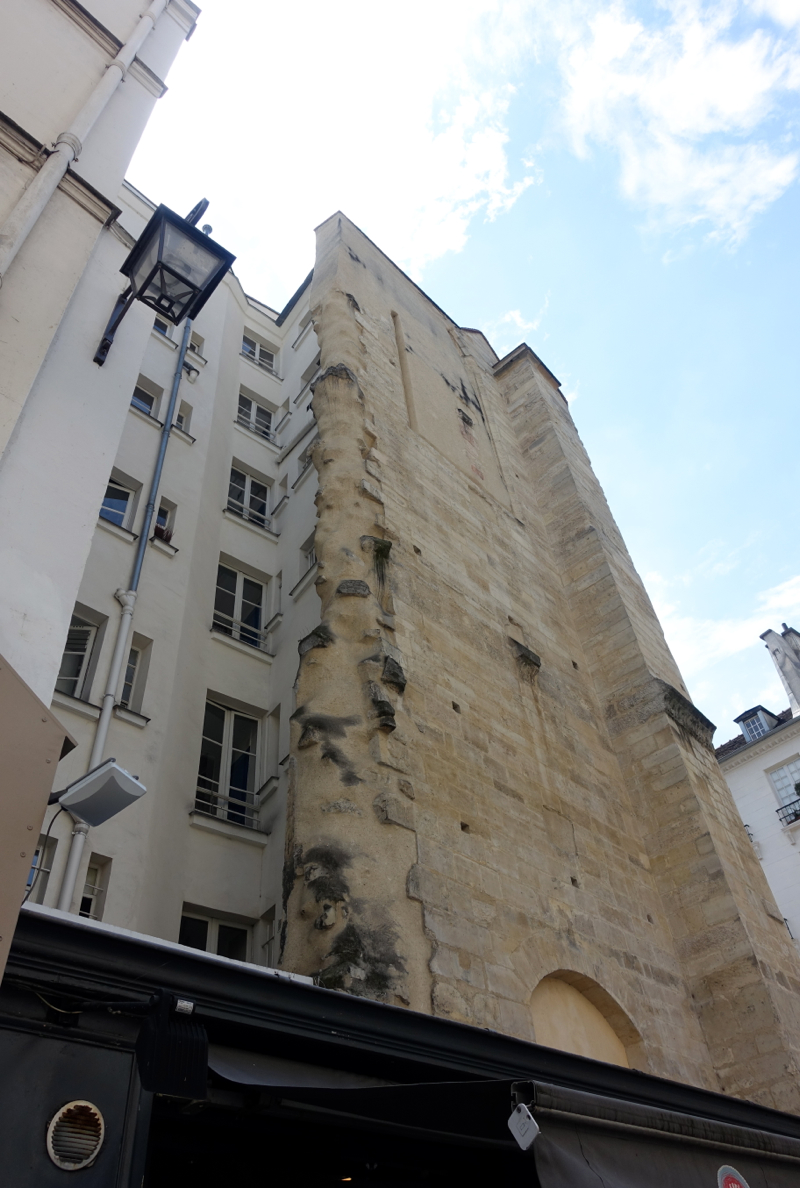 The Hôtel de Sens, which looks like a little castle, is one of just a few surviving medieval private residences in Paris, having been built in the late 1400s for the archbishop of Sens. As with many of Paris' historic buildings, it was later used in a variety of commercial capacities, including for making fig jam (it's located on Rue du Figuier, and you can still see some fig trees nearby). During the French Revolution of 1830 (Trois Glorieuses) when Charles X was overthrown, one of the fired bullets became lodged in the Hôtel de Sens wall and was never extracted, becoming a permanent reminder of its revolutionary journey. 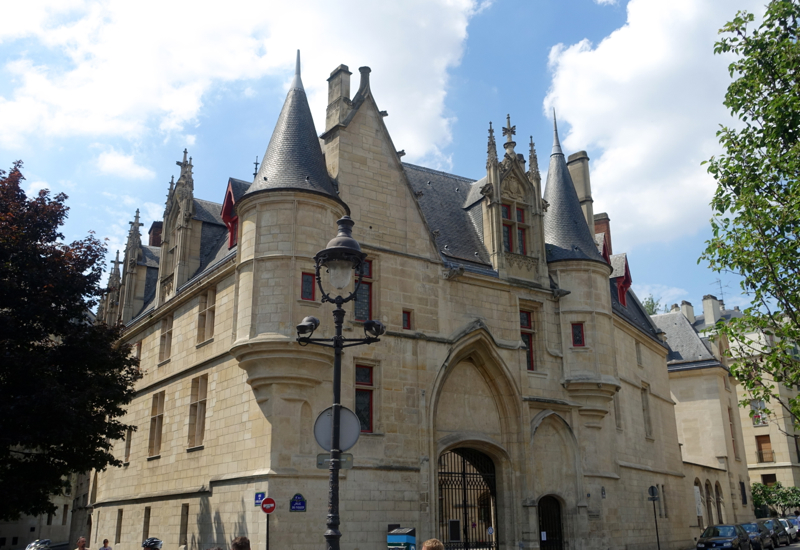 We really enjoyed our Paris Muse walking tour with Raquel, who was great with my 8-year old–she's a mother herself, and has a real passion for sharing her love of French history, art and architecture with kids, encouraging their questions, and patiently discussing their many follow-on queries. She was also very flexible, and as soon as we mentioned Berthillon, she easily guided us there for our refreshing treat, even joking that perhaps Paris Muse should develop a new foodie walking tour.

Private tours are of course more expensive than group tours, but in my experience, having also taken private walking tours in Pompeii and Florence, it's worth it, especially when you're traveling with young kids. In a larger group, your child may tune out, find that the group is walking too fast, start complaining, and force at least one parent if not the whole family to leave the tour, or disrupt the tour for the other guests. The beauty of a private tour with Paris Muse is that you can go at your own pace, spending more time at the places that are most compelling to you and your child. Most parents want to foster in their child a lifelong love of learning and Paris Muse has figured out how to make architecture, art, and history compelling even to kids who might not otherwise be so interested in them.

One thing I would note is that although the activity books are supposed to be for ages 6-12, some of the pages were a bit easy even for my 8 year old, so if you have an older child who is also already interested in art, you may want to go for the Louvre Quest or talk to Paris Muse about something that will be challenging enough for their age/knowledge.

If you've taken a private walking tour with Paris Muse, what was your experience?

Disclosure: We were guests of Paris Muse and enjoyed a complimentary walking tour for review purposes. The views expressed in this post are my own.