Prefer a video? Here's my husband's Lufthansa First Class Review of the 747-8 on YouTube:

Lufthansa First Class Cabin on the 747-8 and Seat Selection

I recently flew Lufthansa First Class from JFK in New York to Frankfurt.  It was a short, overnight flight: only 7.5 hours.  The cabin consisted of 3 rows of seats, with a 1-1 configuration in the first 2 rows, and 4 seats in the third row, for a total of 8 seats.  In the second row, between the two seats there is a serving station.   Overall the first class cabin was small, but there was plenty of space and privacy for those in the first two rows. I'd avoid the third row unless you're a couple and want to be seated right next to each other. For those flying solo, as I was, I'd recommend 1A or 1K. I was shown to seat 1A.  The First Class cabin is located in the very nose of the plane, so the walls curve in and there is an angled configuration.  The cabin was only about half full.  It was a short, night flight, so many of the passengers immediately requested, and changed into, pajamas. Aaaargh! The bane of my First Class experiences is when the aircraft features contoured seats!  As someone who is 6’5”, the molded, contoured chairs are inevitably designed for someone who is about 5’5”, and so the contours zig where my body zags, and for me the chair is a series of random bumps jutting into my back. Bad! I have to try to arrange the throw pillows to make it work at all; the chairs are so much better when they aren't contoured at all.

The legroom was fine.  The seat controls were on my right, and the video controls were on my left.  There was only a normal overhead light, but no special reading light.  The storage bench in front of my feet was very handy.   The seats in the first row, such as mine, have no overhead bins, so those seats share the bins with rows 2 and 3.

The chair, 31 inches across, didn't seem that wide for first class, although it's true that Cathay Pacific First Class, with its extra wide 36 inch seats, may have spoiled me.  Overall, the seat was surprisingly hard and uncomfortable for me in the sitting position. I will say that the red rose at each passenger's seat lent an elegant touch. It would have even been romantic, had anyone been traveling with a partner, but all the passengers were traveling solo, there were no couples on my flight. 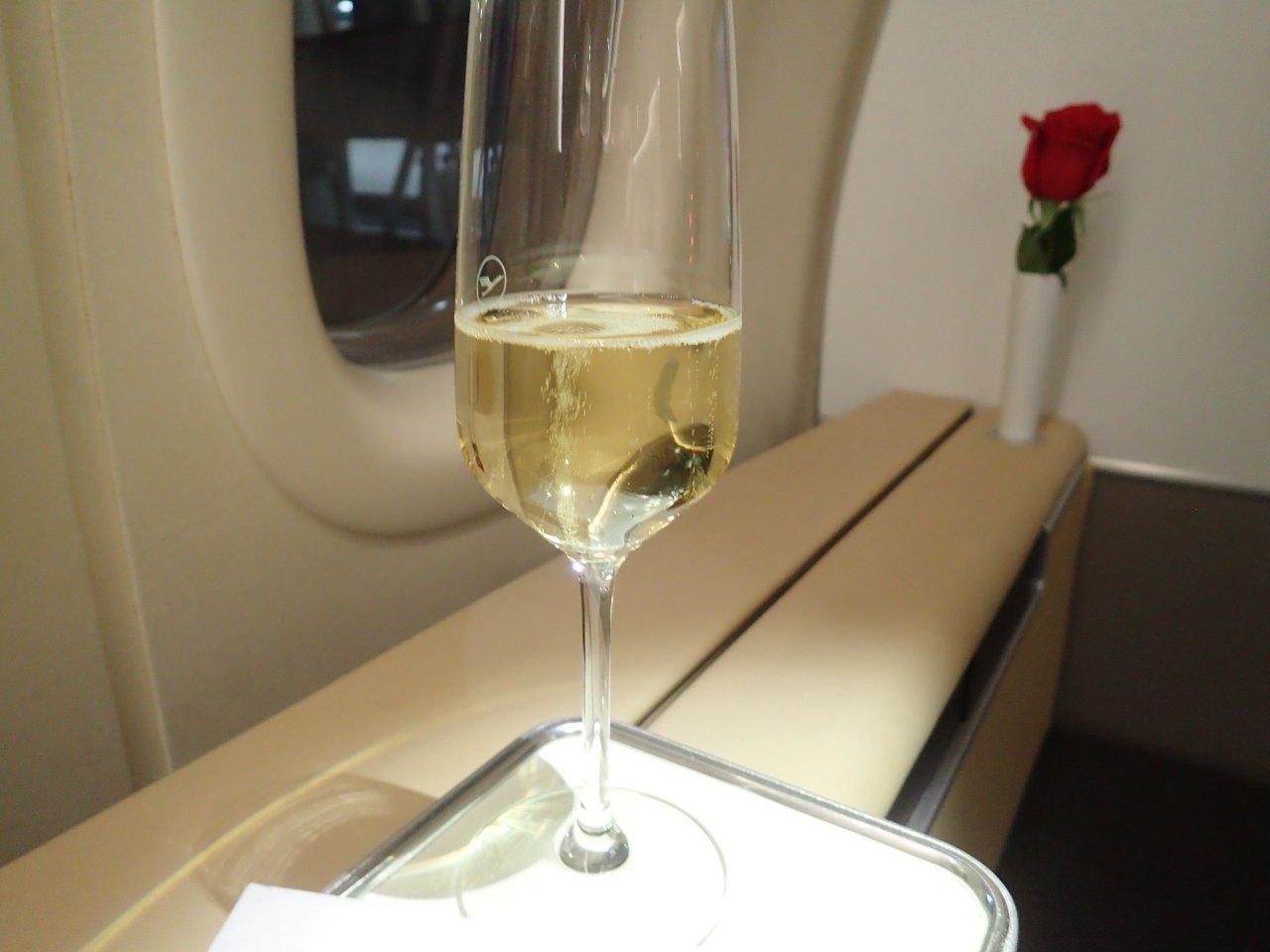 The greeting upon boarding was brisk and efficient.  I was not greeted by name, and was offered nuts (which I declined) and a choice of beverage: I chose champagne, which for Lufthansa First Class is Laurent-Perrier, Cuvee Grand Siecle.  The flight attendant, who was fluent in English and German, then asked if I wanted pajamas. She also provided an amenity kit; the contents included a dental kit, earplugs, La Prairie skincare and a sleep mask. I do like Lufthansa sleep masks, which have two long straps that fasten with velcro. I find that many sleep masks have straps that are too tight or too short, so the Lufthansa sleep mask is better designed than most, at least if you don't have a small head.

There was no offering of magazines or newspapers.  When it was time for sleep, the flight attendant made up the flatbed quickly while I was in the bathroom changing into pajamas.  Although the service was perfectly competent, I did miss the warmth and grace of the Asian carriers. I had already eaten dinner in the lounge, and because the flight was so short, like the other passengers I tried to go to sleep immediately. That said, if you did want dinner, there were several options on the menu for both appetizers and main courses. For the wine list, see the above video. Upon waking, I ordered breakfast. Here's the breakfast menu: The croissant was excellent: very soft and crisp, fresh and buttery. The yogurt and granola were rather bland, but at least the yogurt was high quality. The bacon was perfectly crisp, and the eggs were good. 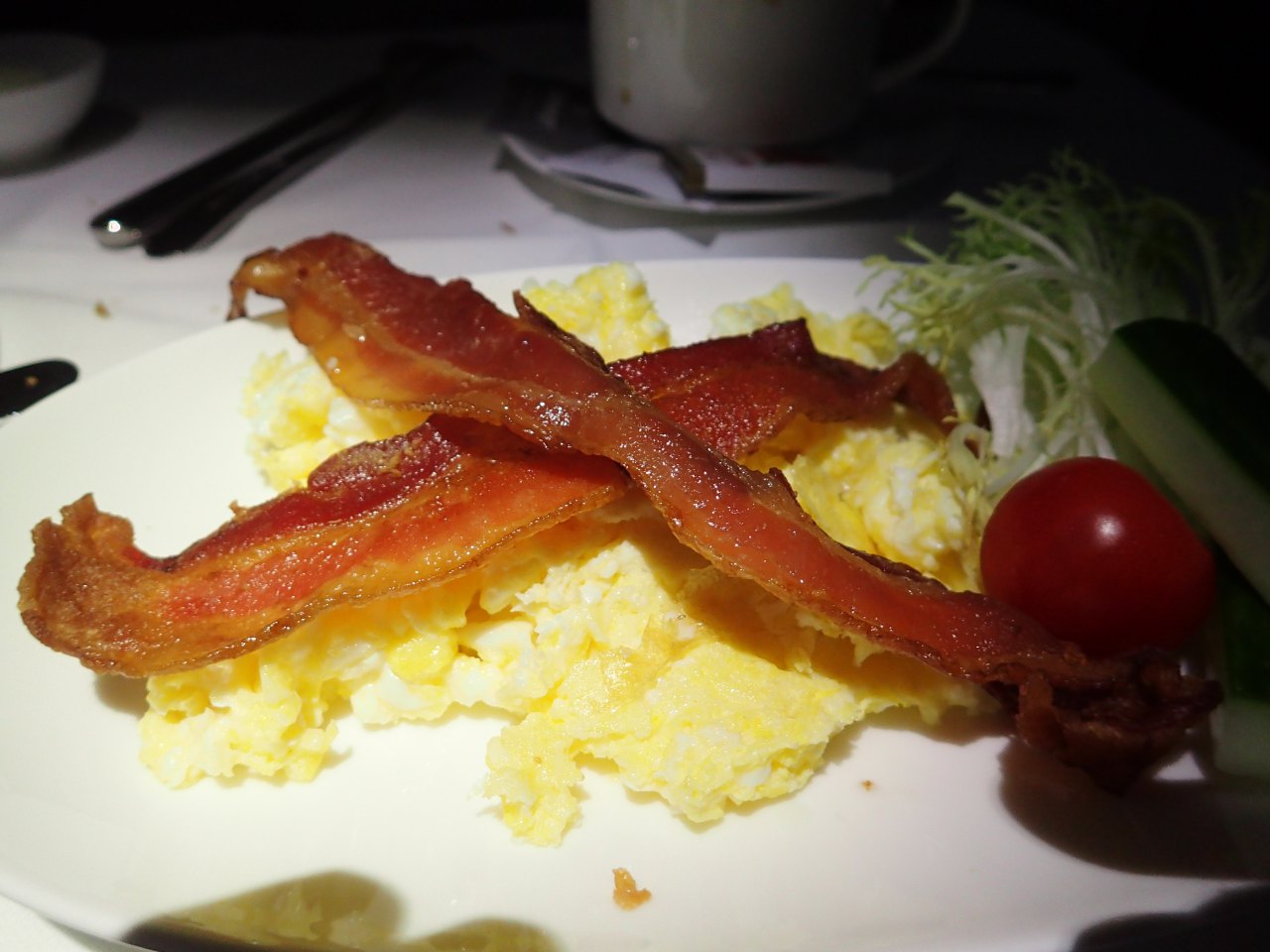 The in-flight entertainment system was accessible by means of an easy-to-use handheld device next to the seat.  The screen was quite small for 1st class, only about 8×12 inches, and quite far away from the chair.  The film selection was really great, with quality films such as Get Out and The Darjeeling Limited, with a healthy mix of German titles.  There were not so many new releases, but otherwise the selection was fine.   Unfortunately, my IFE system kept malfunctioning, so I was never able to watch any good films, and no matter what I chose, “The Good Place” with Ted Danson would pop up on my screen. Bose noise cancelling headphones were provided. The flatbed area was wide and long enough.  And with my handy inflatable bright orange pad, the flatbed was unbelievably soft.  Unfortunately, a constant slight turbulence over the Atlantic made it very difficult to sleep.  The sleeping compartment is not totally enclosed, with an open access to the aisle, which was also little distracting. Overall, this First Class experience was competent, but underwhelming.  The seat was not very comfortable, but the flatbed was nice (especially with my portable mattress pad).  The food was good and the service was fine, but perfunctory.  There was nothing that made the experience feel truly special or luxurious, although there were also no glaring problems (except for Ted Danson playing on a loop on the broken IFE).

If you've flown Lufthansa First Class, what was your experience?

Lufthansa Miles and More Pooling: How It Works

Did you find the first class compartment on the 747-8 more cramped than first class on their a380s?