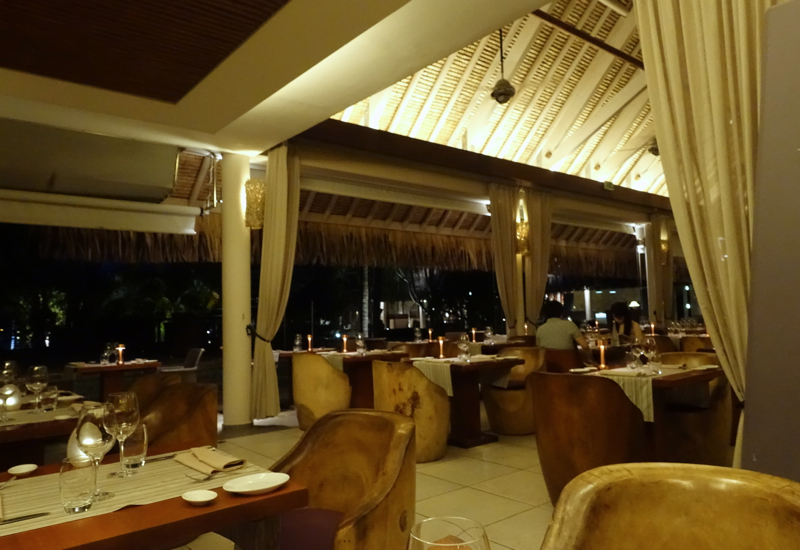 This InterContinental Bora Bora Restaurant and Room Service Review and Menus is part of a trip report on Bora Bora and New Zealand luxury resorts, dining and activities. For the prior posts, please see:

A Must in New Zealand: The Farm at Cape Kidnappers, Hawkes Bay

The resort has 3 restaurants, although note that Le Corail is very seasonal and may not be open during your visit (it wasn't open during our stay, even though it was a very busy period, during spring break and right after Easter).

There are also a couple of bars, Bubbles Bar and the South Beach Bar, and room service.

During our stay we briefly tried Sands for lunch, had breakfast both days and one dinner at Reef Restaurant, and ordered in-room dining twice.

From the main reception area where you check-in and where you settle your bill, you continue along the path for a couple minutes until you reach the large pavilion where the Concierge desk, Bubbles Bar, and Reef Restaurant are located. Most of Reef Restaurant is covered, although open air; there are also some tables outside on a raised deck, but we preferred the greater shade of eating indoors, since the sun was already strong at breakfast time.

Breakfast is generally not included in the regular rates at the InterContinental Bora Bora, although there are packages offered, such as the current Dream and Dine package, that include daily breakfast and dinner for two, which can be a good deal if the rate is XFP 10,000 (~$100) or so more than the best available flexible rate, since breakfast alone is about $44 per person.

With a kid, we're fairly early risers, so we were generally at the breakfast buffet before 7:30am, and the buffet was quite beautifully laid out, which also made for better photos. I noticed, however, that by the time we left several of the dishes were badly in need of replenishing, particularly highly in demand items such as the sashimi.

Our favorite items from the breakfast buffet were:

I really enjoy passion fruit, and while we had that fantastic passion fruit mousse cake and passion fruit sorbet at the Four Seasons Bora Bora, I didn't ever see fresh passion fruit on the breakfast buffet. So I was very happy to enjoy fresh lilikoi, as we call it in Hawaii. 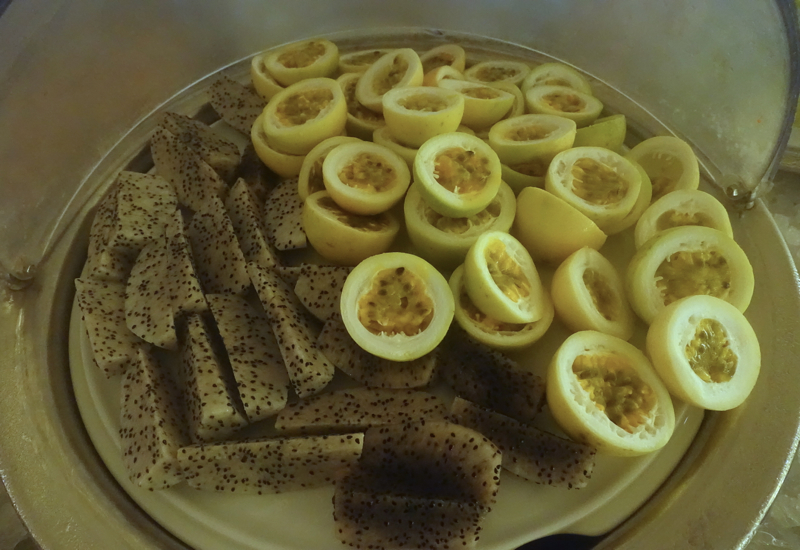 Don't miss the nicely plated tuna sashimi, to the right of the omelet station. I didn't see any wasabi or soy sauce, but it was fresh enough to be enjoyed plain. 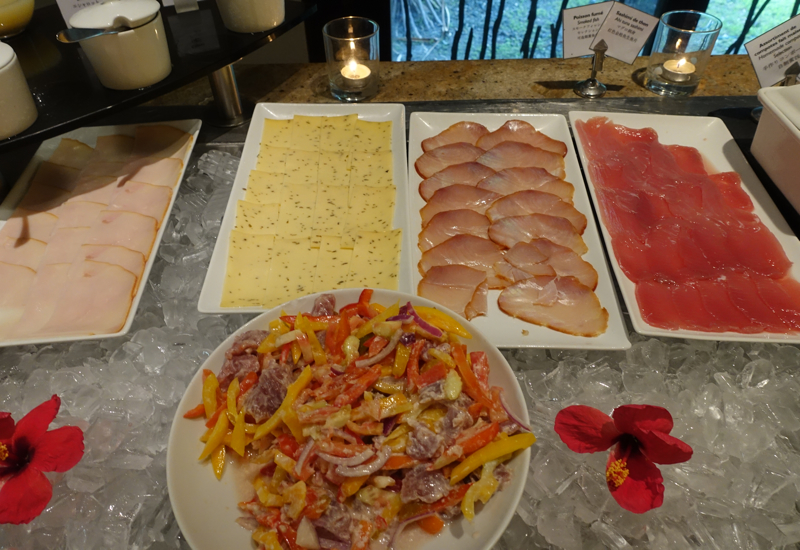 On the pastry table, this was by far the best item: a frangipane tart of the day. It's obviously like having dessert for breakfast, but since I wasn't able to get any dark hot chocolate, this was my one indulgence. 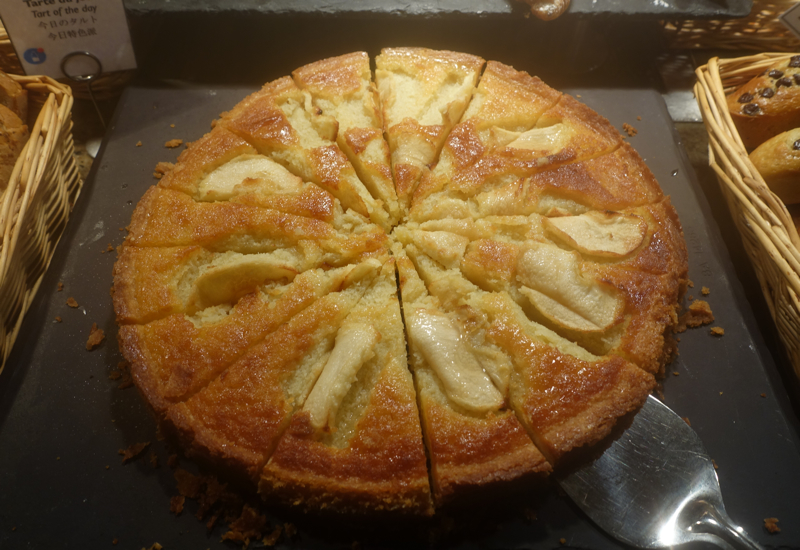 4. Omelet Made to Order

The nice thing about getting to breakfast on the early side is that there was no wait for an omelet (or other eggs) cooked to order. I wouldn't say that it was better than at the Four Seasons, but it was freshly made and delicious. 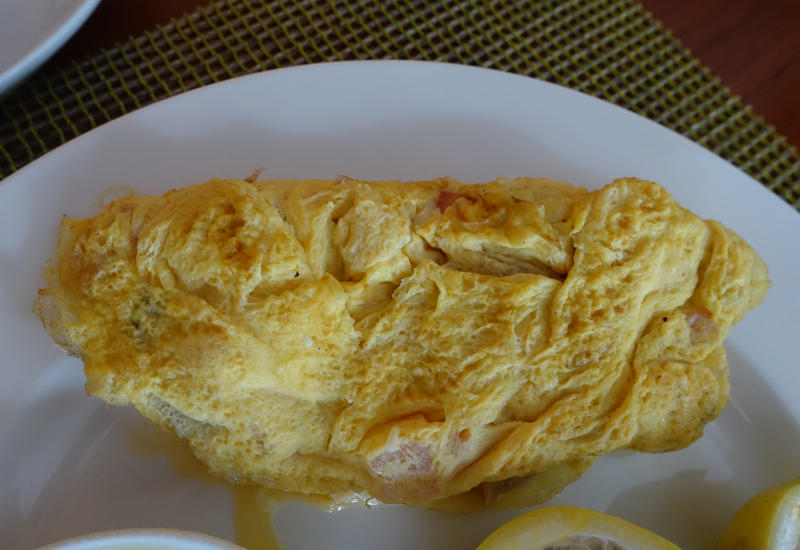 As our breakfast staple, we made full use of the yogurts on offer. I preferred getting plain yogurt and mixing it with some berry compote from another station, while my son liked the vanilla yogurt. 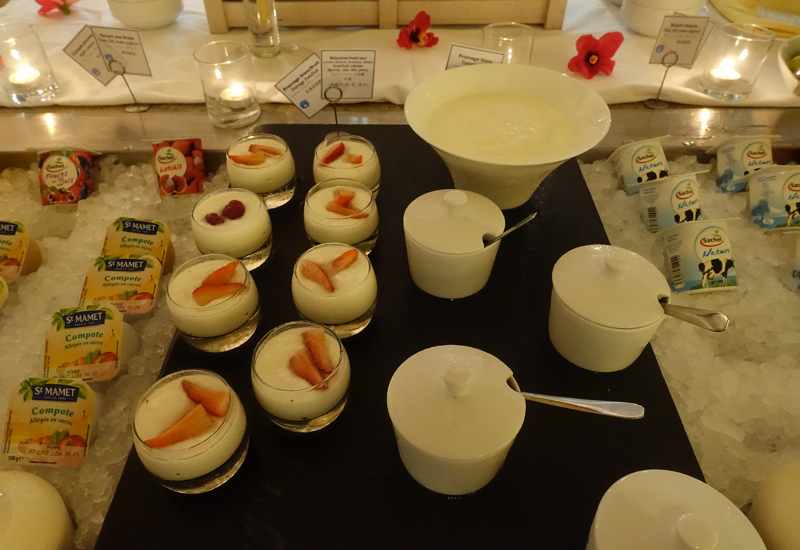 The worst items were:

You might think of lots of fresh squeezed juice when you think of Bora Bora, but unfortunately, it's hard to come by. We were able to get fresh squeezed orange juice at the Four Seasons, and it was certainly possible to juice your own fruits and veggies at the buffet there. At the InterContinental Bora Bora, I didn't see a juicer, and when we asked for fresh squeezed juice, we were brought juice that–I'm not joking–tasted fermented, as though it had been made with spoiled fruit. We were told it was watermelon juice. If so, it was well on the way to becoming watermelon wine, it was so sour and foul tasting. 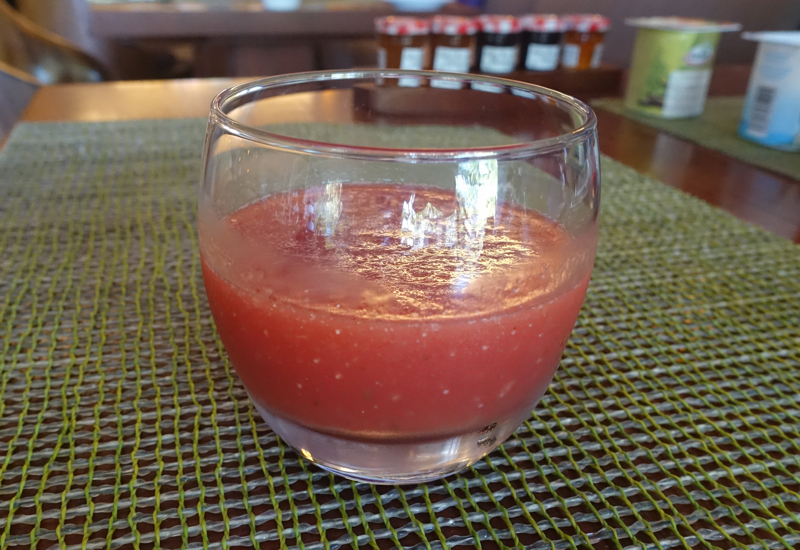 These were drinkable (unlike the juice) but clearly machine made. I was really missing the dark hot chocolate at the Four Seasons. 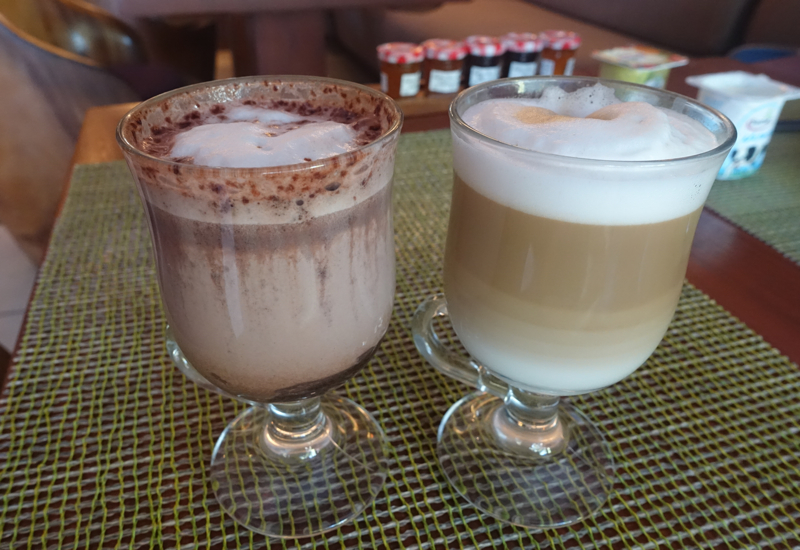 3. Pastries (Except the Tart)

While the frangipane tart was one of my favorite items, the other pastries were decidedly mediocre–the ones at the Four Seasons were much better. 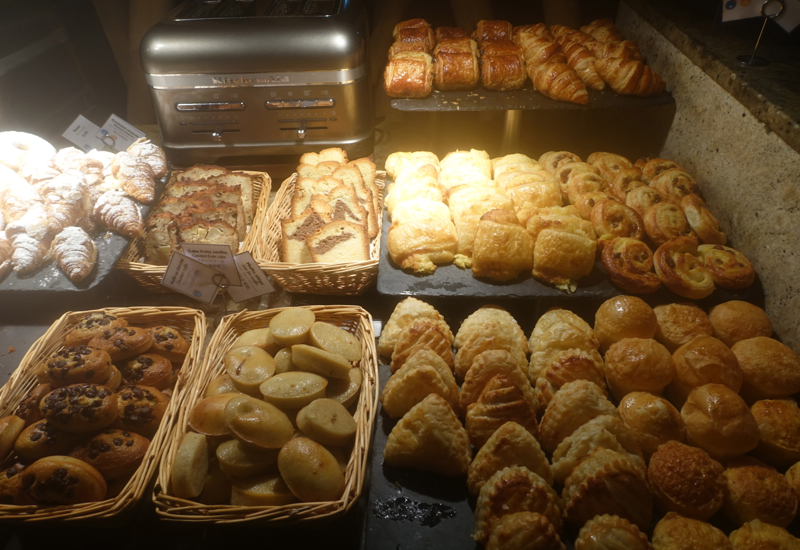 Our first evening we had an early dinner at Reef Restaurant, arriving at 6:30pm, probably even before it was technically open. The staff were kind enough to seat us, and in retrospect it was a very good thing that we came early, since about 10-15 minutes after us, the restaurant steadily started filling up and I can only imagine how backed up the kitchen got.

While it was dim and I didn't get photos of the menu, the basic entree choices were:

The entrees were all in the $30-40 range before tax/service/gratuity.
We were first brought bread rolls and given olive oil. While a choice of bread or a bread basket would have been nice, that' probably only the case at the resort's fine dining restaurant, Le Corail. 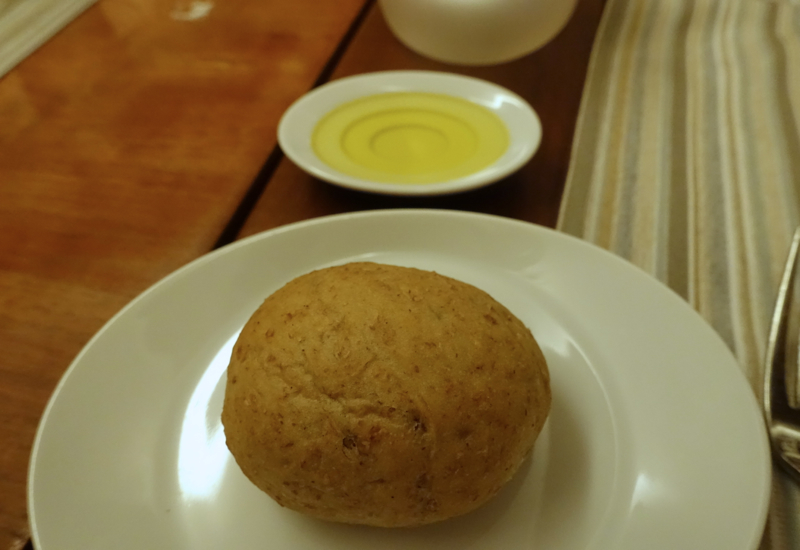 There was an amuse bouche, but it was quite disappointing, with a slimy texture. I didn't finish mine. 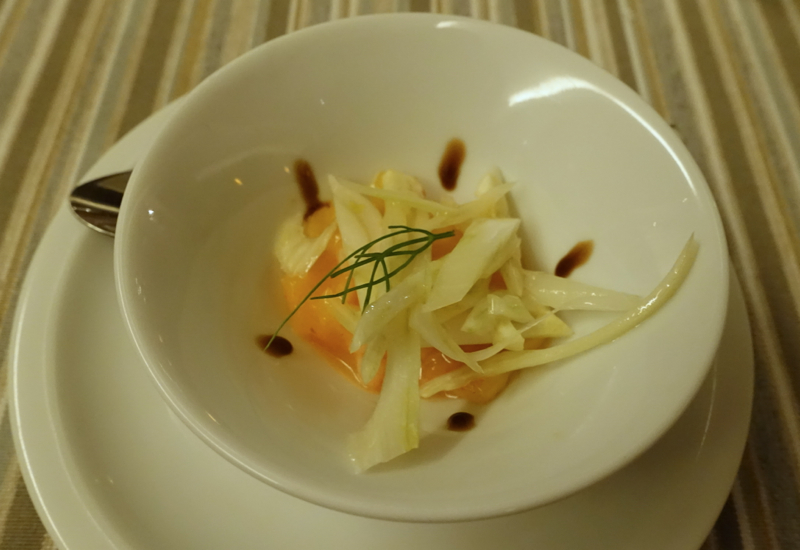 Our son was happy with his cheese pasta from the kids' menu: 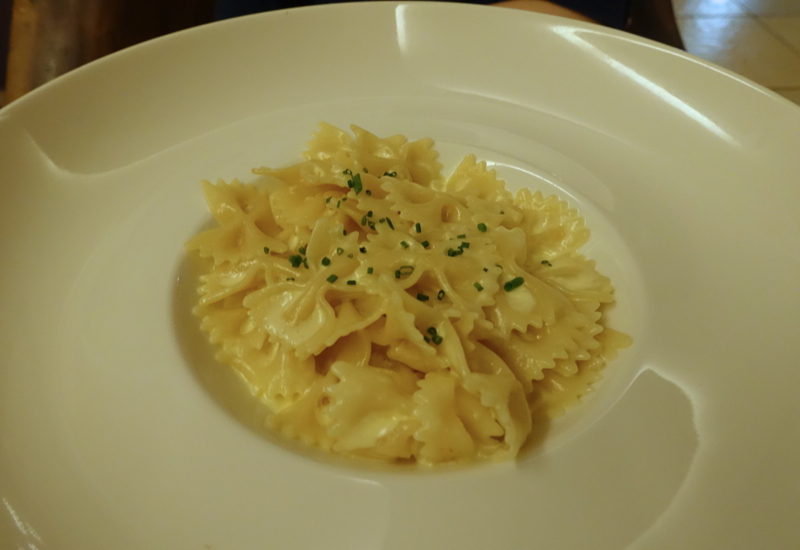 And I was very happy with my main course, the Duck Breast with Mashed Parsnip and Roasted Figs, which in my view was the best dish. Given the poor amuse bouche, I was pleasantly surprised at just how good and expertly prepared this was: 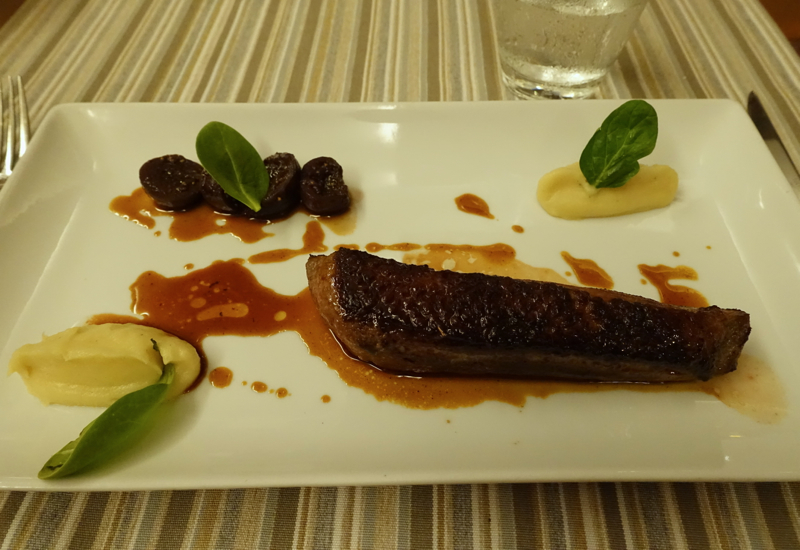 My husband's Guinea Fowl was less good, and not memorable, although perfectly edible. 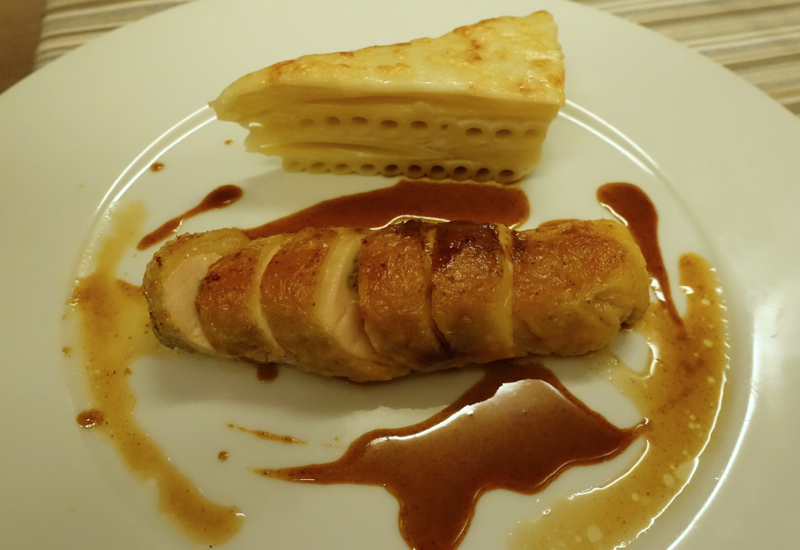 Since we hadn't finished our New Zealand Sauvignon Blanc that was one of our anniversary amenities at the Four Seasons, we brought it with us and ordered room service a couple of times so we could enjoy the rest of it with our meals.

Here are the InterContinental Bora Bora menus, for room service: 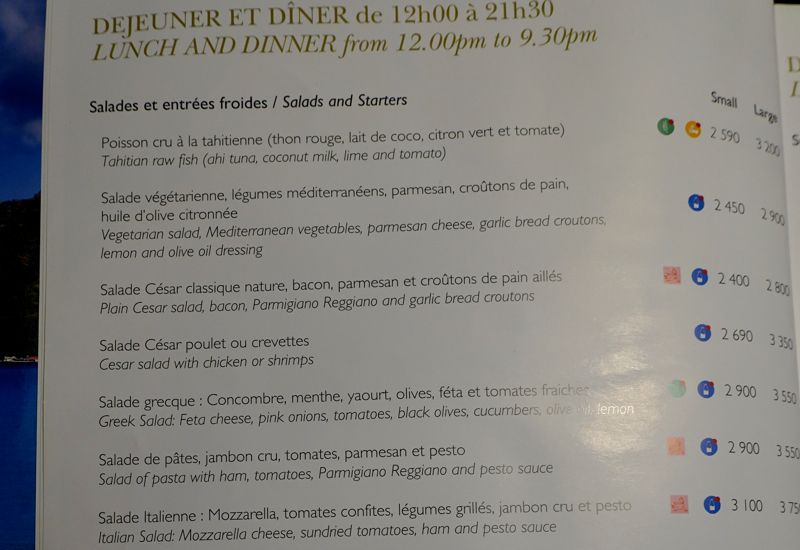 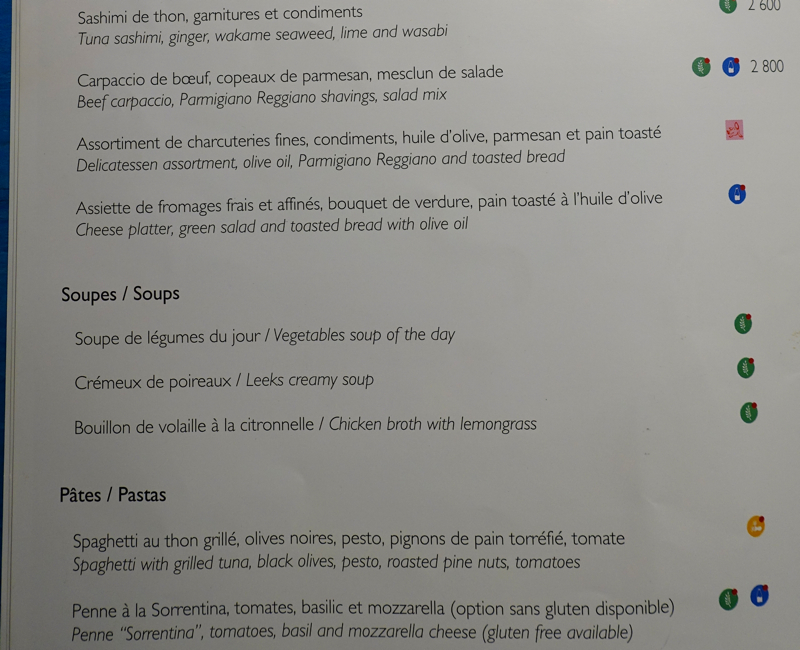 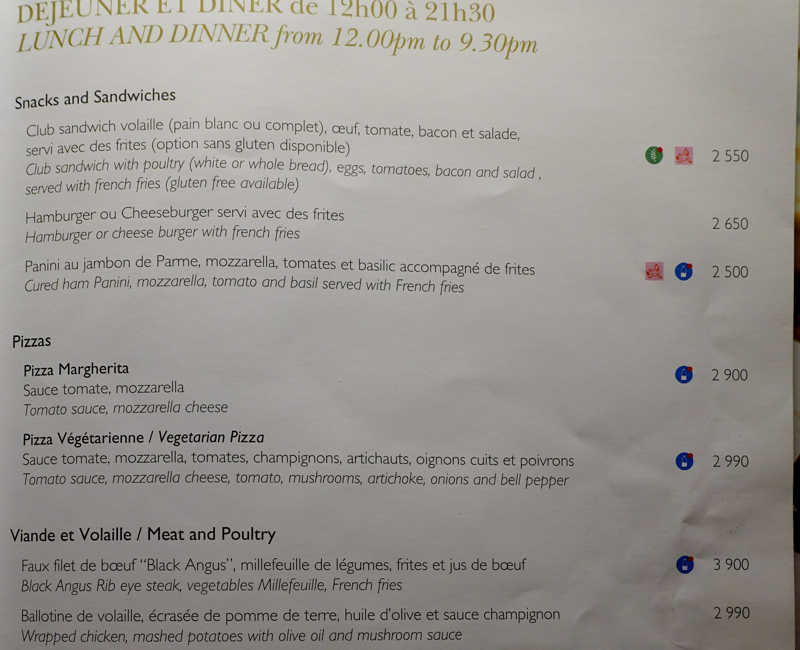 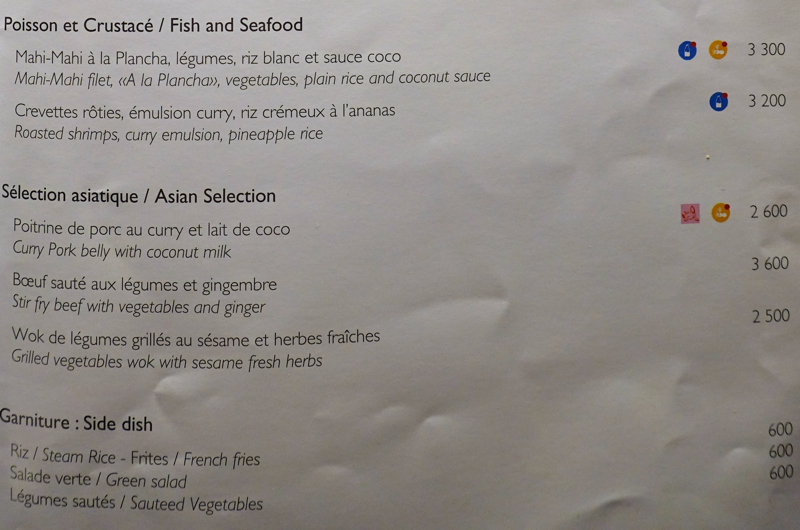 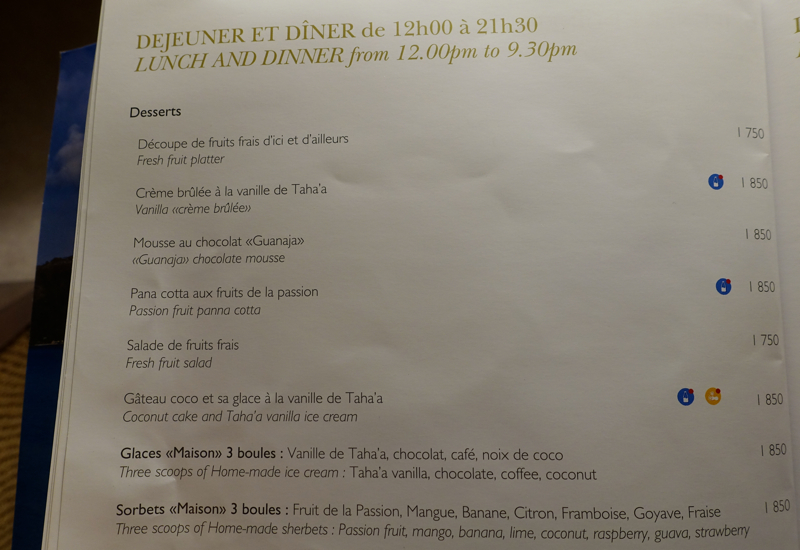 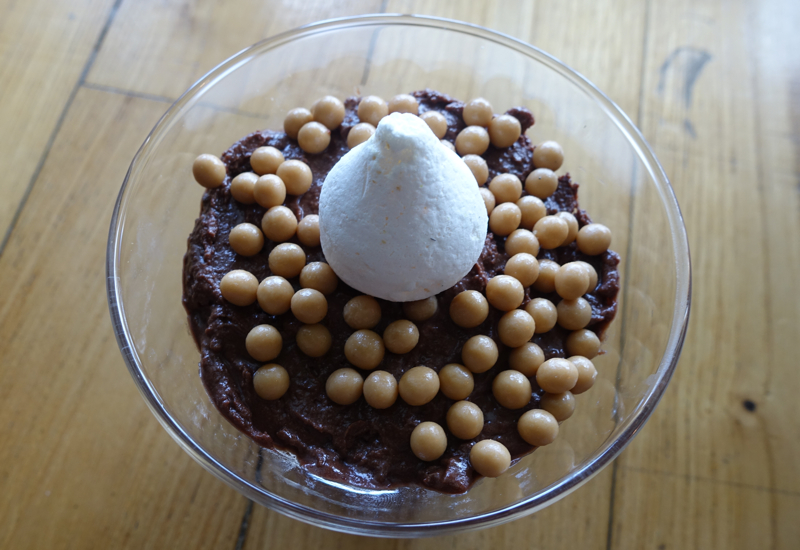 This was a simple dish, and while the shrimp weren't as big or as good as the Sauteed Moorea Shrimp dish at the Four Seasons Bora Bora, it was still one of my favorite dishes of those we tried from InterContinental Bora Bora room service. 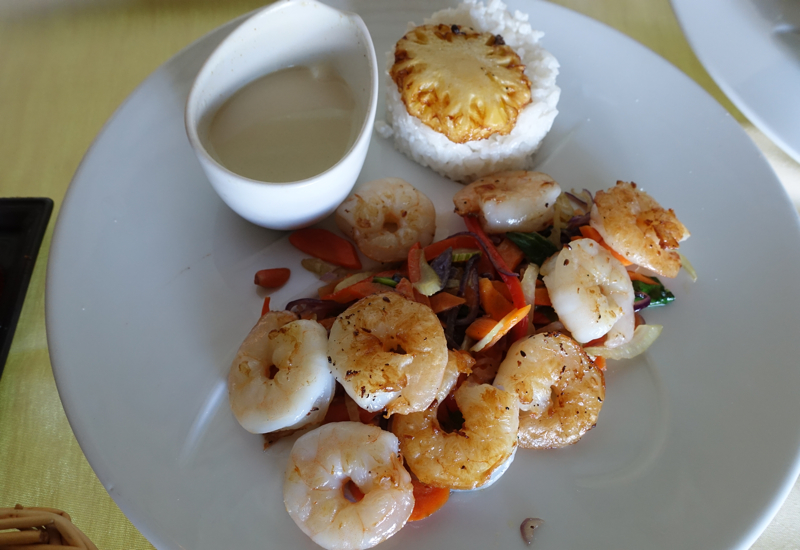 Again, I preferred the version I had at the Four Seasons Bora Bora, but still thought this was one of the more satisfying dishes from the room service menu. I prefer French Polynesian Poisson Cru to traditional Mexican ceviche, since the coconut milk helps balance out the acidity of the lime, for a more nuanced dish. 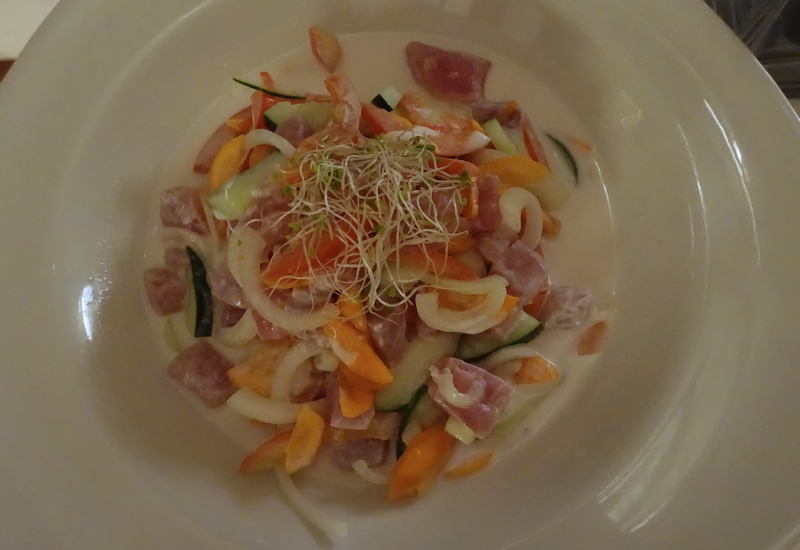 I really enjoyed my roast duck dinner at Reef Restaurant the first night, although it was not a huge portion and might not have sufficed for a heartier appetite. The buffet breakfast was decent, although not as extensive or as high quality as the one we enjoyed at the Four Seasons Bora Bora. It did, however, have more beautifully presented fresh tuna, as it was plated in sashimi form rather than chunks, and I certainly appreciated the fresh passion fruit, which was not available during our stay at the Four Seasons.

Our room service orders were mostly correct, although there was a huge variation in the kids' fruit plate that we ordered twice–the second order was about one fifth the size of the first order, so a huge lack of consistency. Fish was in general overcooked, so I recommend going with the Poisson Cru instead.

If you've dined at the InterContinental Bora Bora, what was your experience?

Disclosure: I received two complimentary nights, inclusive of breakfast, and paid for all other meals. The opinions in this review are mine.