TravelSort reader Pila writes “I was wondering if there was any way I could fly Emirates First Class from Bangkok (BKK) to Hong Kong (HKG) on an award?

Pila alludes to one of Emirates' fifth freedom routes (a route that an airline has the right to fly between two foreign countries, where the flight connects to a flight to or from the airline's home country).

It's actually pretty amazing that it's possible to fly true international first class on this route, which is just 3 hours from Hong Kong to Bangkok and 2 hours 45 minutes from Bangkok to Hong Kong. That's even shorter than the 5 hour Cathay Pacific First Class Flight from New York (JFK) to Vancouver (YVR) that I recently flew, another fifth freedom flight.

While you can now use Alaska Mileage Plan miles to fly roundtrip awards on Emirates between the U.S. and the Middle East, and you can also use Korean Skypass miles (which you can get with 1:1 transfers from Ultimate Rewards points) the Alaska Mileage Plan and Korean Skypass Emirates award charts do not publish award redemptions for intra-Asia travel such as the Hong Kong to Bangkok route. 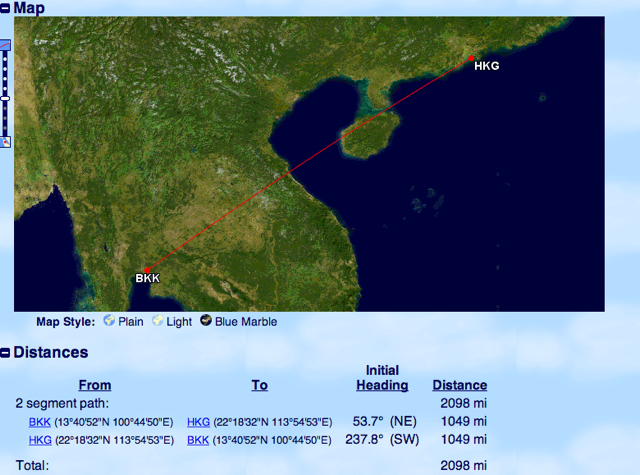 If you transfer points from SPG, you could transfer 55,000 points to 65,000 Japan Airlines miles, since 40,000 of those SPG points would earn a 25% bonus. Or if you have a need for additional Japan Airlines miles, transfer 60,000 SPG points to 75,000 miles, and use the additional 10,000 miles toward a future trip. See Starwood Preferred Guest (SPG) Airline Transfer Partners: Turn SPG Points into Miles

That said, this is a pretty poor redemption value, in my view. Assuming a roundtrip price of $1150, you'd be looking at about 1.8 cents per SPG point, and there are plenty of ways to get more than that by transferring SPG points to other airlines and redeeming for more expensive award flights.

My own recommendation if you really want to fly this segment is to bite the bullet and buy a paid ticket. Only if you have a lot more SPG points (or Japan Mileage Bank miles) than you know what to do with and are cash poor would it make sense to redeem for this award using Japan Airlines. And keep in mind that on a flight this short, you'll have to hope for a less than full first class cabin so you can have your turn at the in-flight shower!

If you've flown this flight or Emirates First Class on another flight, what was your experience?

A Foodie's Guide to Hong Kong