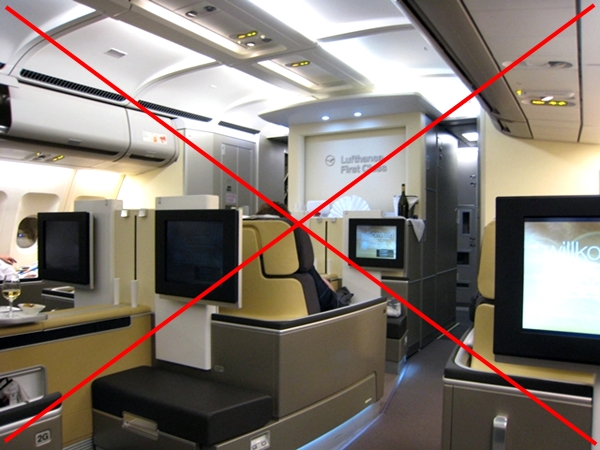 Is Compensation Due You for a Downgraded Flight Due to an Aircraft Change? For example, if you were booked on Singapore Suites on the A380 and there's an aircraft swap to a 777 with only Business Class seats, what are your options? Or what about in the recent scenario of Singapore changing its Los Angeles to Tokyo to Singapore flights from an A380 to 777-300ER, effective October 23,2016–is there any compensation for passengers booked in Singapore Suites, who will now be in Singapore First Class on the 777-300ER?

Here are a few things to keep in mind with downgraded cabins and seats, followed by some examples for different airlines.

These are two different things, so it's important to be clear about what type of downgrade you're experiencing. If you are involuntarily downgraded from first class to business class or from business class to economy class on a given airline, that will often get you compensation of some kind. On the other hand, if you hold a Business Class ticket but experience an equipment swap that means you're still in Business Class, but now have an angled flat seat instead of a flat bed seat due a different aircraft operating the flight, most airlines will either give you nothing or provide a token gesture of goodwill. No airline that I'm aware of has a contract of carriage that assumes any liability or offers any refund in the event of an equipment change, so a goodwill gesture is at the sole discretion of the airline.

Does Your Flight Qualify for EU Compensation?

If you're on an EU airline on a flight to or from an EU member state, or on any airline on a departure from an EU member state, your flight is covered by EC 261/2004. This is important, because it supersedes your airline's contract of carriage (although getting your airline to pay up can be another matter entirely). Specifically, the law provides in Article 10, Upgrading and Downgrading:

“If an operating air carrier places a passenger in a class lower than that for which the ticket was purchased, it shall within seven days, by the means provided for in Article 7(3), reimburse

(b) 50% of the price of the ticket for all intra-Community flights of more than 1500 km, except flights between the European territory of the Member States and the French overseas departments, and for all other flights between 1500 and 3500 km, or

(c) 75% of the price of the ticket for all flights not falling under (a) or (b), including flights between the European territory of the Member States and the French overseas departments.”

On award tickets, unfortunately, 75% of the segment for which you were downgraded may not amount to much in terms of miles and taxes, and you may want to press for the airline to reaccommodate you on a flight the next day, if they are still selling space in your original cabin of service.

Because of this and because of the enormous difficulties getting most airlines to pay EC 261/2004 compensation, no matter how clear cut the case, I recommend trying to get on a different flight in your original class of service, rather than pressing for compensation.

Want to Fly in the Same Class of Service? Be Flexible with Dates

If the reason you were downgraded was a temporary equipment swap, for example due to a mechanical problem, and not a permanent change in the aircraft that will be deployed on the route going forward, then you may be able to switch to a flight the next day or the day after in order to keep your same class of service. Obviously this will be subject to availability and may not work in peak seasons, when the first class and/or business class cabin may be sold out for a week or more. And if you opt for this, you will also generally need to cover your own lodging costs for the extra nights.

Examples of Downgrade Situations and Compensation or Resolution, If Any

Unsurprisingly, AAdvantage front line agents were of no use, but once blitzen played HUCA a few times, got through to a more helpful supervisor, and firmly pressed to ask the British Airways liaison to open up first class award space on the earlier flight, due to the involuntary downgrade, blitzen was able to get reticketed in British Airways First Class on the earlier flight.

Another Flyertalker, Exec_Plat, reinforces the need to insist that AAdvantage ask the operating carrier's liaison to open up space: “I had to tell them “I want you to formally ask Qantas to open an award seat to accommodate me due to their schedule change”…the agent typed out my request; expressed skepticism….but 24hrs later it was granted and ticketed.”

I rarely book clients on American Airlines since most prefer to fly Cathay Pacific First Class, JAL First Class, JAL Business Class, Etihad First Apartment or Etihad Business Studio, Qantas First Class and the like, but if you are booked on American Airlines metal fortunately you can get a free cancellation (or reroute, subject to any fare difference) in the event there's a change of aircraft and you don't wish to fly it. American Airline's Contract of Carriage (again, this only provides to AA's own flights) provides that changes to aircraft are treated similarly to changes in schedule that affect a passenger's departure or arrival by 2 or more hours:

“Schedule change in the event, after ticket issuance, schedule changes are made by AA that…(iii) result in a substitution of equipment not acceptable to the passenger…the passenger will have the option of cancelling without penalty, or rerouting on different flights to/from the same or different destination. However, the passenger must pay any additional amounts resulting from the rerouting.”

Flyertalker CoolTourist bought a paid Lufthansa First Class ticket from PHL via FRA to MAD, only to later find that Lufthansa had changed the aircraft on this route from an A346 to an A343. After some back and forth with Lufthansa's German Call Center (in these situations, don't bother with the U.S. Call Center) the final resolution was a reroute from IAD in first class, with an offer to pay for PHL-IAD.

For Emirates, experiences with getting downgrade compensation are mixed. Flyertalker whimlike reports “I was downgraded from Emirates First Class to Emirates Business Class because they swapped out a 2-class plane from the 3-class plane I was booked on. When I contacted them about compensation for this they told me I was entitled to exactly $0.”

On the other hand, flyertalker Trotski reports twice going through Emirates' online refund form to claim compensation for a segment that was downgraded from Emirates First Class to Emirates Business Class: “[I] have got refunded the difference between First Class and Business Class for the downgraded leg. I did it online via the flight cancellation/refund option and requested refund due to downgrade and got compensation both times this happened.”

In the case of those who held Singapore Suites award bookings on the LAX to Tokyo NRT to Singapore or reverse and have been reseated in Singapore First Class on the 777-300ER, there is no refund in KrisFlyer miles since Singapore Suites and Singapore First Class saver awards cost the same number of miles anyway. But what I do recommend is asking Singapore KrisFlyer to place you on the wait list for JFK to Frankfurt to Singapore or the reverse, for your dates. While in my view the wait list it's unlikely to clear, especially for two passengers traveling together if neither is a Singapore KrisFlyer elite, never say never–you at least have some small chance of getting lucky.

If you've been involuntarily downgraded on a flight, what was your experience either getting to fly in your original class of service or receiving compensation or a goodwill gesture?

Hi, I have 3 first class tickets to Paris via Singapore this Saturday 29th June and SQ have just bumped us down to business class because there was an aircraft change from the 12 seater first class to the new 6 seater first class. We purchased the highest fare possible in October for that sector and SQ are telling me that we were the last of the 12 passengers to book our ticket and therefore we are the ones that need to be bumped. They raised this issue with us a month ago and our agent told them no way… Read more »

Jenny, really sorry to hear about your being downgraded, but unfortunately, if you don’t have any date flexibility, Singapore is within its rights to simply refund you the fare difference between your original first class flight and your downgraded business class flight. If you had date flexibility you could insist on another flight still in First Class. Based on the fact that most of my Award Booking clients reserve their Singapore flights ~11 months in advance, I believe Singapore that half (6 of 12) of the first class passengers on your flight booked 9+ months out, before you purchased your… Read more »