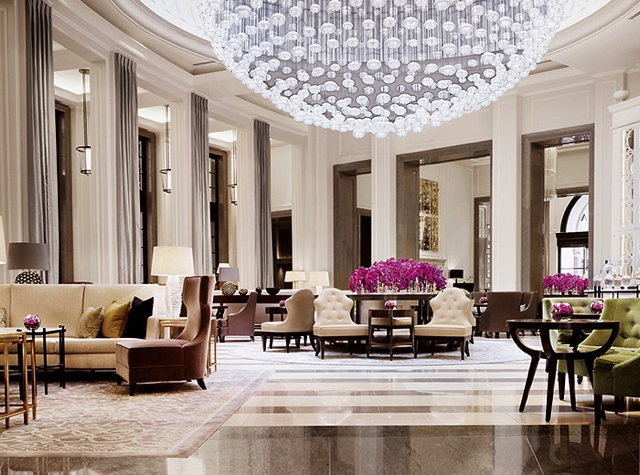 This Corinthia Hotel London Review is part of a UK and France trip report including flights in British Airways in New First Class and stays in a Scottish castle and 5-star hotels in London and Paris. For the prior posts, please see:
British Airways Galleries Lounge in Newark and First Class Dining Review

While its exterior facade has been carefully preserved, the hotel's interior spaces have been strikingly designed, starting with the stunning Lobby Lounge with its soaring ceiling, anchored by a spectacular Baccarat Chandelier–see if you can spot the one red crystal, a fitting “heart” of this brilliant display.

The Lobby Lounge would be the perfect elegant setting for traditional British Afternoon Tea, and gets high reviews for its offerings and service. We didn't have a chance to try it on this visit, but the baskets of fresh strawberries, beautiful cakes, and chilled bottles of Laurent Perrier champagne looked enticing…plus, I've heard that the scones served here are some of London's best. 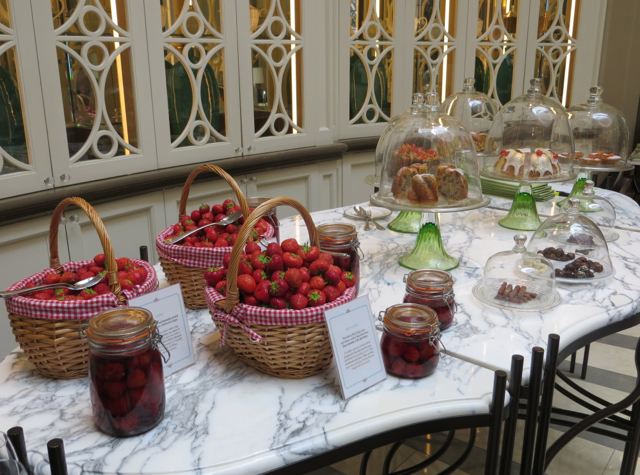 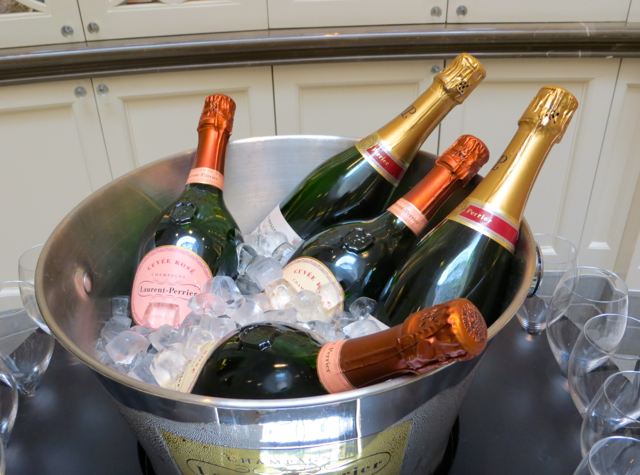 The hotel itself is so elegant that I wished, at check-in, that I was more dressed up. That said, the associates at reception couldn't have been more friendly and welcoming, and we were soon on our way up to our Executive Room. We shared an elevator with a Russian family, all impeccably dressed, and of course the munchkin's ears perked up on hearing Russian although he was too shy to say anything.

We entered our Executive Room, which was all to the right of the entrance way: 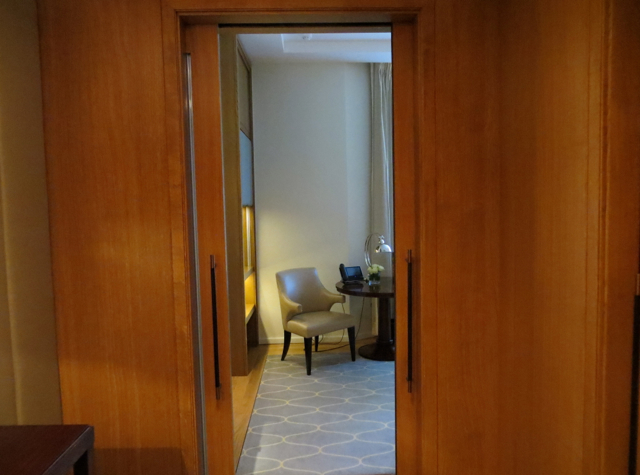 On the table facing the entrance was a lovely bouquet of fresh roses. So few U.S. hotels nowadays put fresh flowers in any guestrooms, usually only suites, and at least to me they make the room so much more inviting. 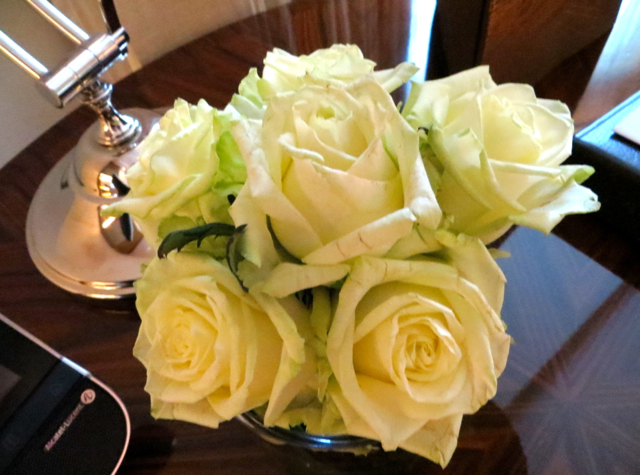 There was a spacious walk-in closet on the right, perfect for suitcases and hanging up a number of suits and dresses. Some hotel rooms have practically no room to actually put your suitcases and clothes, but not this Executive Room at the Corinthia Hotel London–plenty of space. 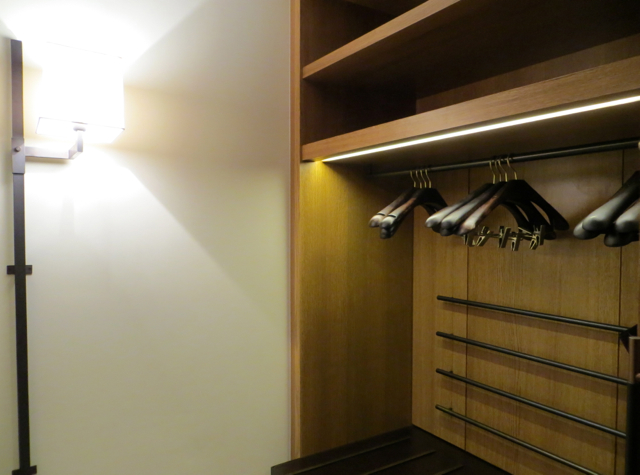 The Executive Room itself is 484 square feet, a very nice size for Central London, and it comfortably fit both the King bed it came with and an extra bed for the munchkin: 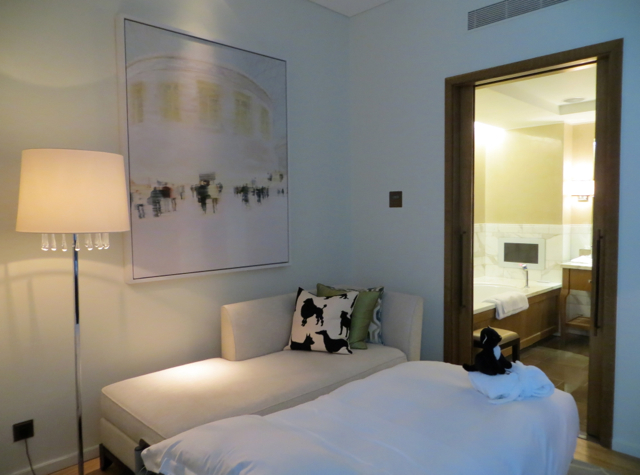 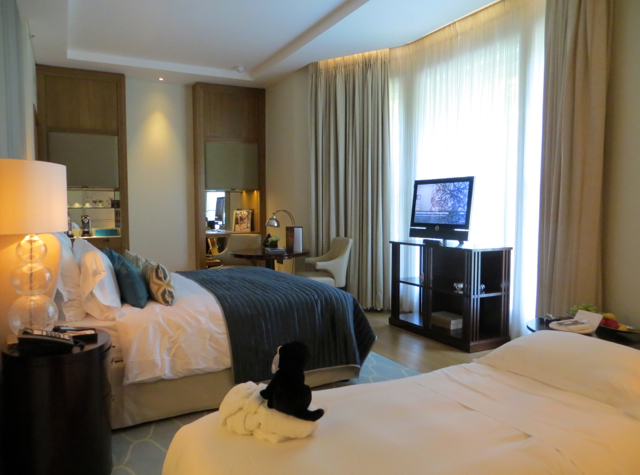 The King bed was very comfortable and I slept soundly, as did the munchkin: 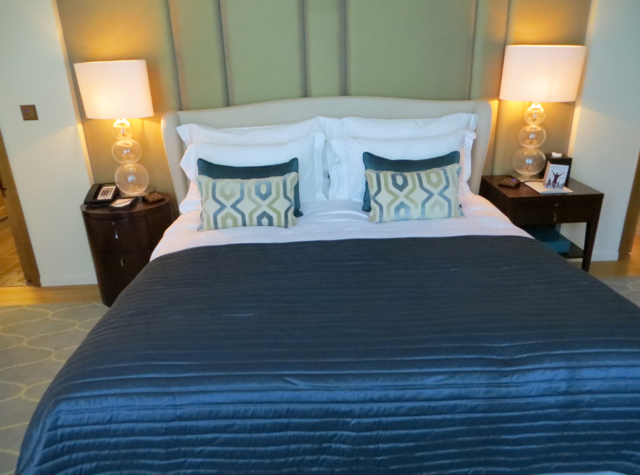 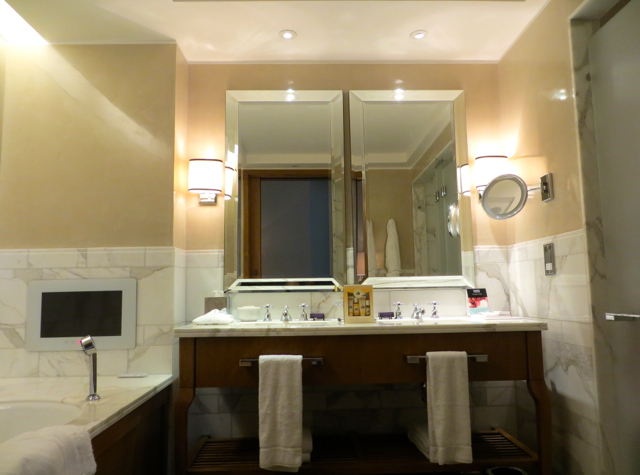 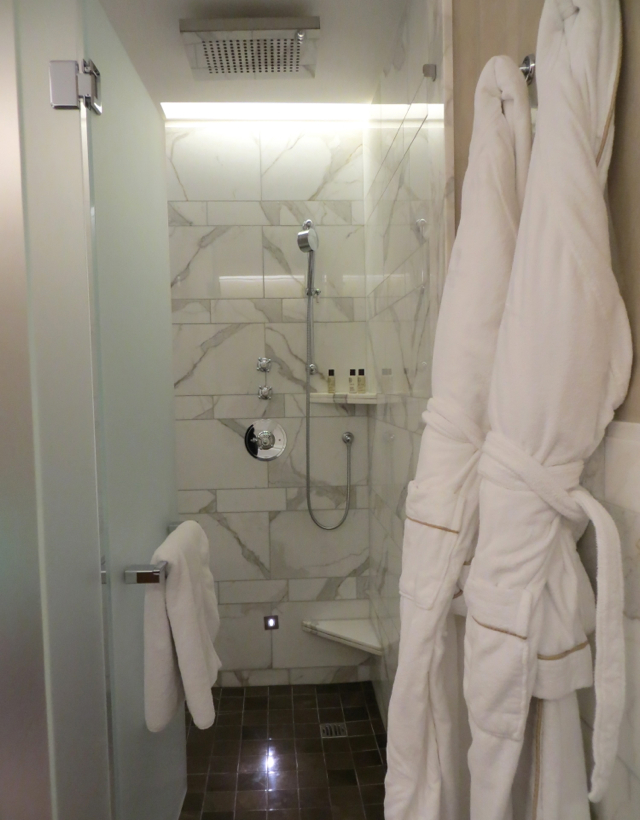 Bath amenities and toiletries are by Espa–definitely worthy of keeping for one of our later hotel stays that wouldn't be so luxurious. 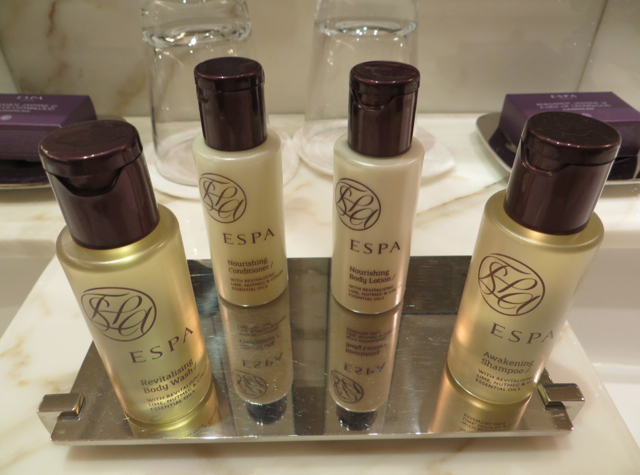 There were even Burt's Bees child bath amenities for the munchkin, which he was excited about–his first question was “which one can I use to make a bubble bath?” 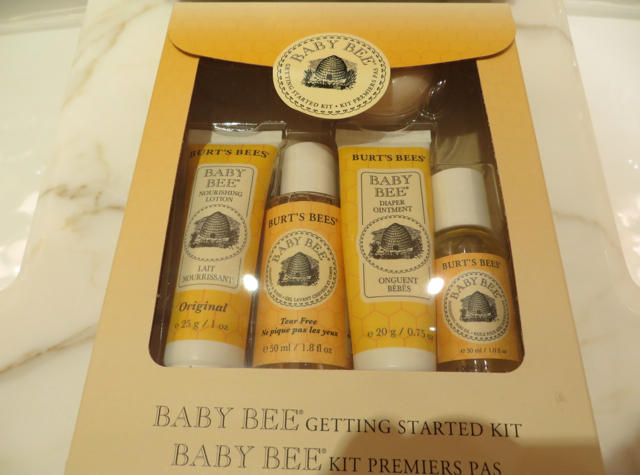 He eventually got his wish, and was as happy as a clam in the bath 🙂 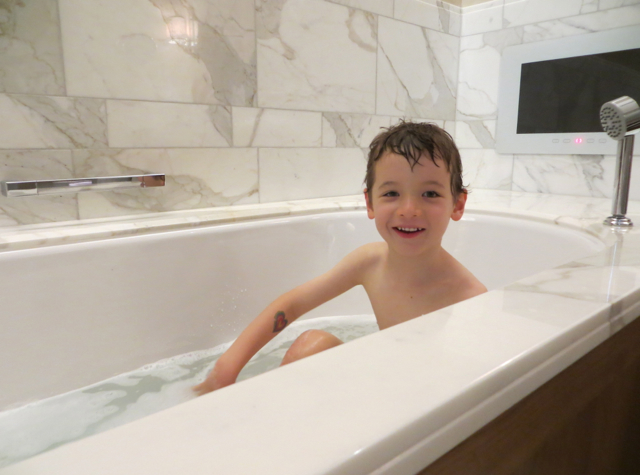 In addition to the Burt's Bees amenities, the Corinthia Hotel London provided a child size robe for the munchkin and a cuddly cat stuffed animal, an instant hit, especially as we were traveling light and hadn't brought any of his favorite stuffed animals from home. 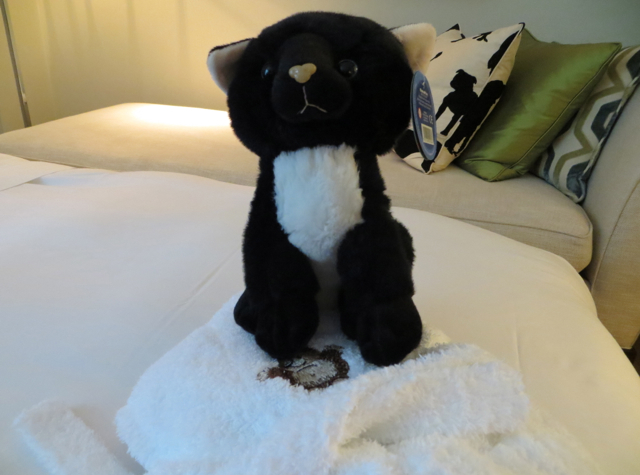 There was also a lovely welcome amenity of photo-worthy fresh fruits, chocolates, and a welcome note, all of which we thoroughly enjoyed: 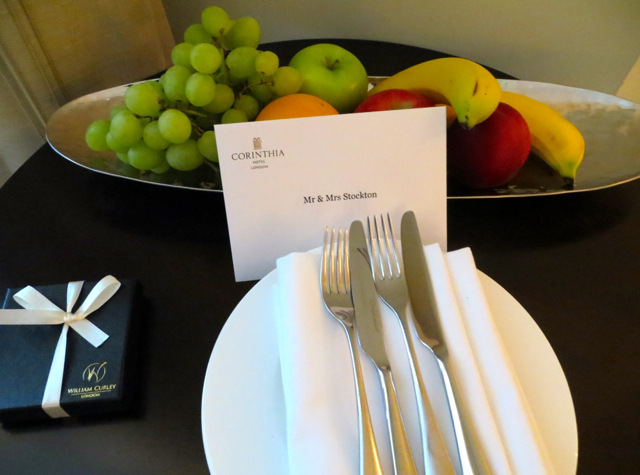 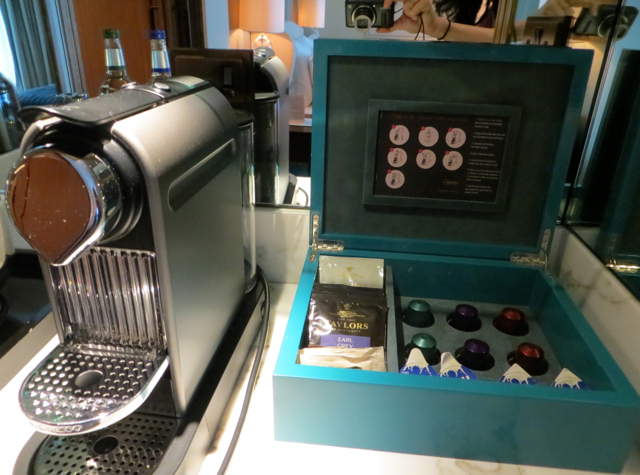 Our room looked out onto a leafy tree lined street below–it was almost like being right in a park, and we didn't hear any traffic noise during our stay. 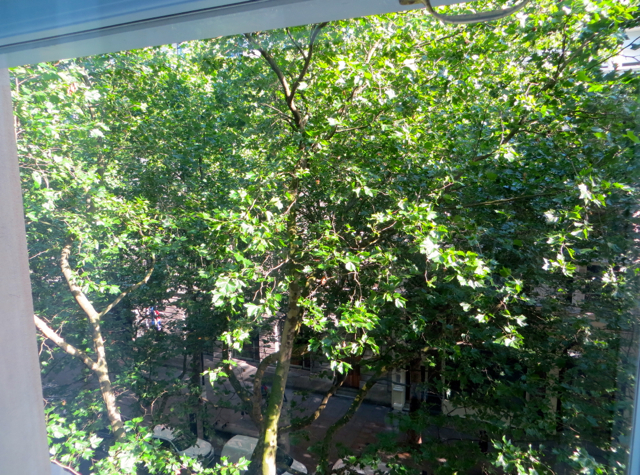 One of the things the munchkin was most looking forward to was the pool. Children's hours are from 10-11:30am and from 3-4:30pm daily, so the morning hours fit our schedule perfectly, having arrived on a red eye flight and graciously been allowed to check-in early. Even if your room isn't ready in the morning, just ask if you may leave your luggage and use the spa facilities, since it would be a shame to miss the pool, one of the very few in a central London hotel.

Do note that children are not permitted in the other spa facilities, such as the steam room–but they'll probably be most interested in the pool anyway. 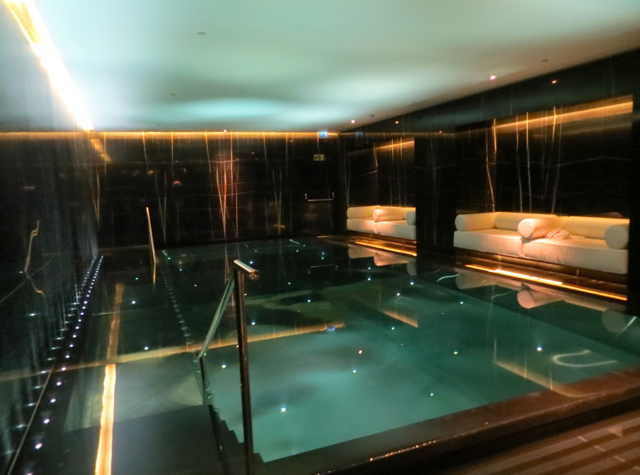 We were also fortunate enough to get a glimpse at several other rooms and even penthouses at the Corinthia Hotel London. For a writer or lover of books and libraries, the Writer's Penthouse would be quite the place to stay. It's hard to get a sense through photos of the great atmosphere of the library, with its fireplace, artwork and bookshelves, but it would be the perfect pied a terre for anyone who wants to hold a literary gathering or simply drinks with friends in a refined yet cozy library setting. 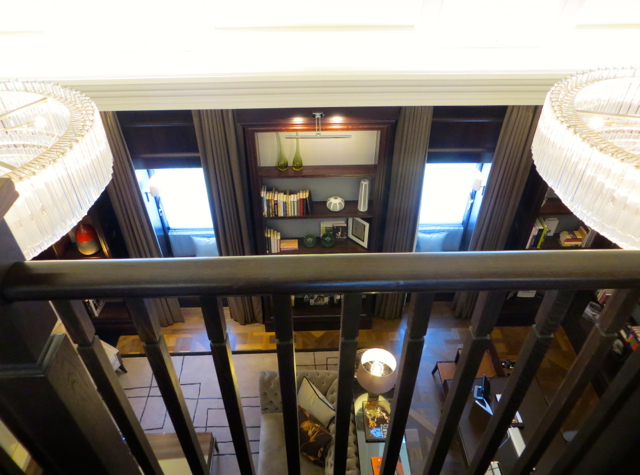 The Royal Penthouse has to be seen to be believed–it's apparently the largest in London, at 5000 square feet, but it isn't just the size that amazes–it's the views. Can you imagine these London views while dining al fresco on your private terrace? 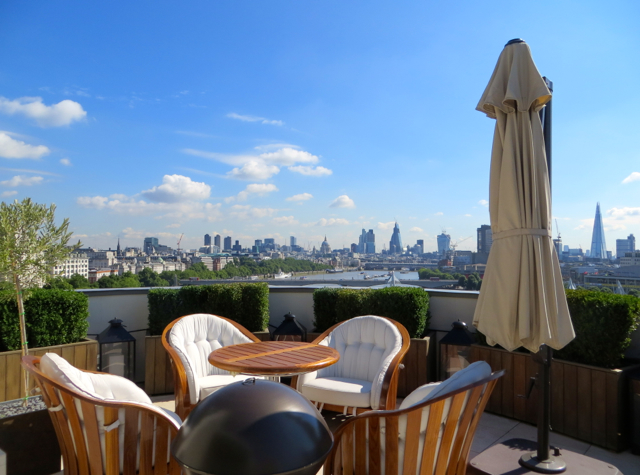 And here's the London Eye seen from the private terrace of the Royal Penthouse: 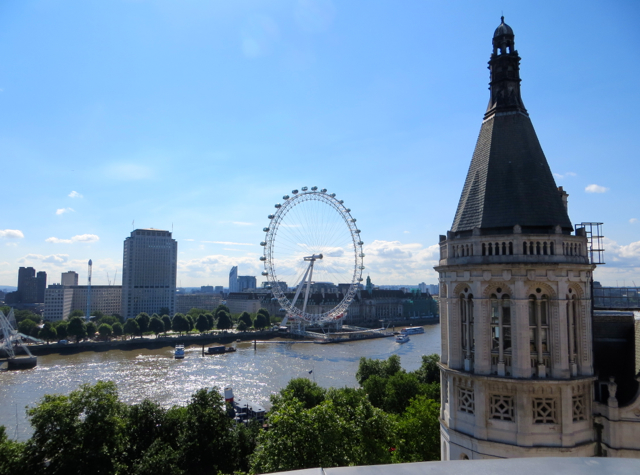 The interior living room of the Royal Penthouse curves around, so even inside you'd be able to walk from window to window admiring the view: 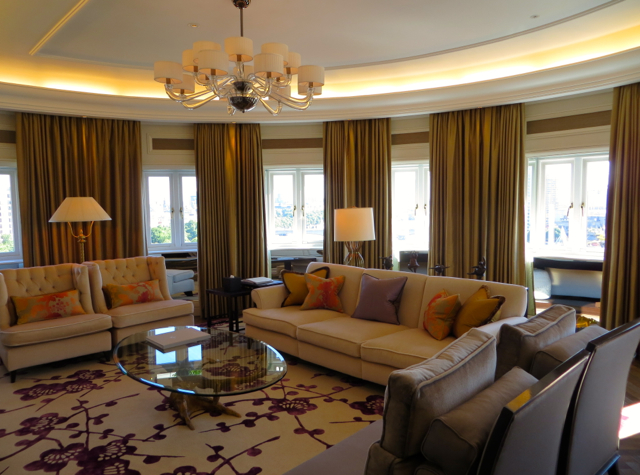 The master bathroom is larger than many London hotel rooms, with a sensually curved dual vanity, soaking tub, separate shower, and even a fireplace. 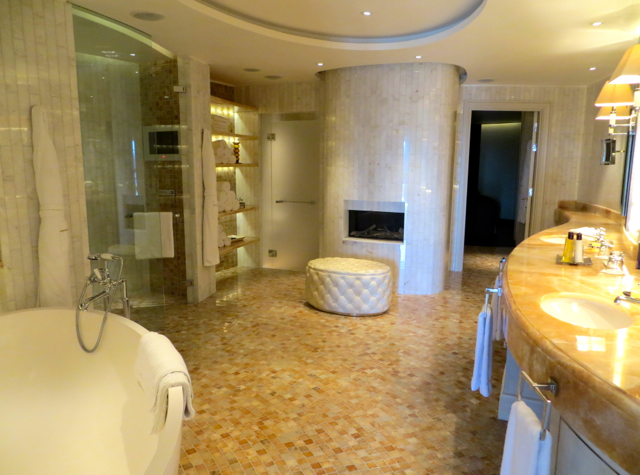 Oh, and also a private spa treatment room, since if you have the kind of money needed to stay here, you probably prefer your spa attendants to come to you anyway: 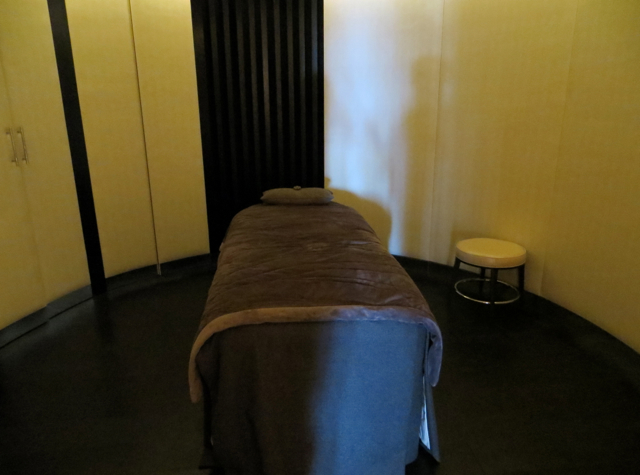 The Verdict: Beautiful, spacious, and thoughtfully appointed rooms, top-notch service, and a convenient location close to Westminster, Covent Garden and Trafalgar Square make the Corinthia Hotel London a superb choice for a luxury stay in London for business and vacation alike. And there are enough child-friendly touches that I would highly recommend the hotel to families, as well as couples.

If you've stayed at The Corinthia Hotel London, what was your experience? 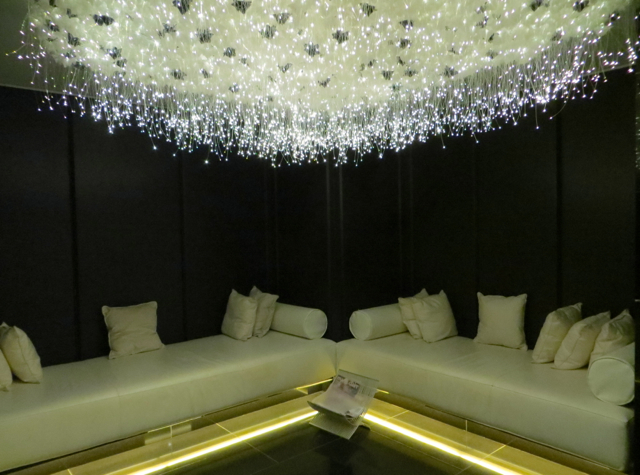 Disclosure: My family and I were guests of the Corinthia Hotel London, however the views expressed in this post are my own…and the munchkin's approval cannot be bought with a complimentary stay, since to him all hotel stays are free!