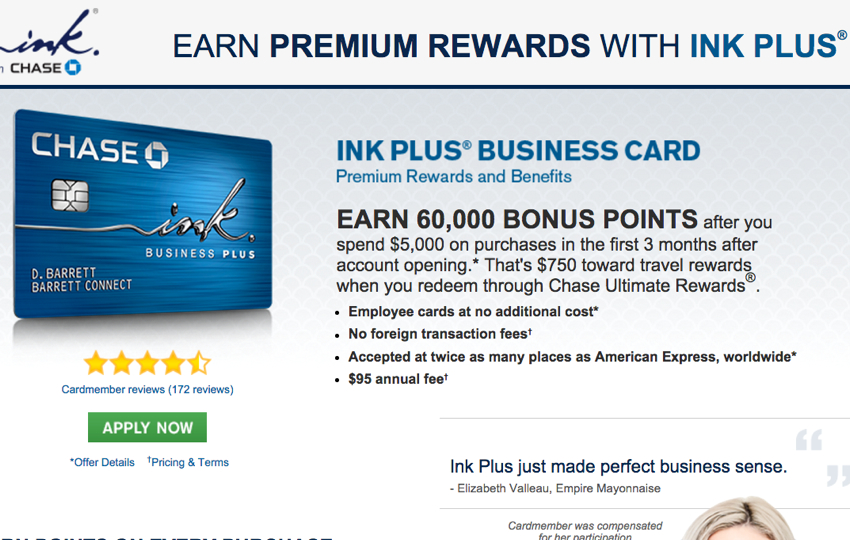 There's good reason to get the Ink Plus now, before Chase anti-churning rules take effect for the Ink Plus card in March, 2016. TravelSort reader Jason writes “I tried applying for the Sapphire Preferred from your Best Travel Credit Cards page but was denied due to too many recent credit applications. How many is too many, for Chase credit cards? And is there another Chase card I could still get?”

Jason has run into Chase's anti-churning rule, nicknamed 5/24 because in most cases, Chase will deny your application for the Chase Sapphire Preferred or Chase Freedom if you've opened 5 or more new credit cards within the past 24 months. This new rule emerged last year, around May 2015, but so far hasn't been used for the Chase Ink Plus or Chase's co-branded cards, such as the Hyatt Visa, United Visa, Marriott Visa, Ritz-Carlton Visa, etc. that are issued by Chase.

Per Flyertalk, which cites credible reports, the 5/24 rule will also applying to the Chase Ink Plus in March 2016, and is slated to apply to Chase co-branded cards such as the Hyatt Visa, etc. starting in April 2016. That makes now an ideal time to apply for the Ink Plus *if* you're eligible to earn the bonus.

Can I Earn the Bonus Again for the Ink Plus?

You're eligible to earn the bonus again for the Ink Plus if you don't currently have the card and haven't received a bonus for this card within the last 24 months.

Do I Need an EIN to Apply for an Ink Plus Card?

No, you can just use your SSN to apply for an Ink Plus or other small business cards, if you're a sole proprietor. If you haven't officially named your business, for example if you want a business card to separate out business expenses for your real estate rentals, consulting work, etc., you can put your own name as the company name.

What If I Have Two Businesses, Can I Earn the Bonus Again for a Second Ink Plus While Keeping the First?

Does the 5/24 Rule Only Count Chase Credit Card Applications?

No, the rule applies to ALL new credit card openings from all issuers and banks, not just Chase.

Does Being an Authorized User on a Card Count Against the 5 New Credit Cards in 24 Months Limit?

What is the 60K Signup Bonus Worth?

In my view the best Ultimate Rewards transfer partners are Singapore KrisFlyer and Korean SkyPass, and to a lesser extent British Airways, United MileagePlus and Hyatt. I can't speak for others, but because we tend to redeem miles for Singapore Suites, Singapore First Class and Singapore Business Class, our redemptions tend to get us 6 cents or more in nominal value per point. That means 60,000 points yield $3600 in nominal value for our uses, although a more common valuation of 1 Ultimate Reward point is about 2 cents per point, or about $1200. And if you're not getting at least 2 cents per point in value when redeeming your Ultimate Rewards points, you should probably be focusing on cash back cards.
Do you plan to apply for the Ink Plus before the 5/24 rule goes into effect in March 2016?
Related Posts
60K Ink Plus Bonus Offer
Chase Ultimate Rewards Points Transfer Changes
Diversify Your Miles and Points Portfolio: Top 8 Reasons
Book Your Award with TravelSort's Award Booking Service