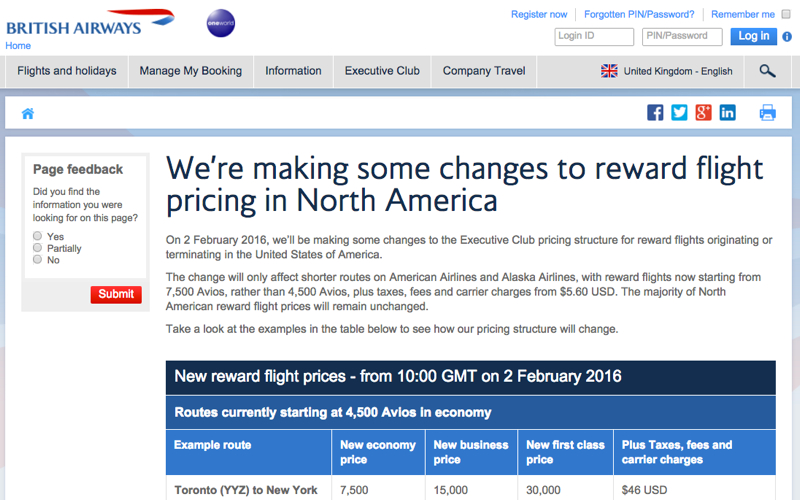 Another British Airways devaluation: higher award prices for short haul flights in the U.S. Specifically, all routes that currently are just 4500 Avios each way in economy will increase to 7500 each way, on February 2, 2016.

If you have a British Airways account, you probably received a similar email yesterday, bolding mine:

“We’re going to be making a change to the Executive Club pricing structure for shorter reward flights originating or terminating within the United States of America. From 2 February 2016, reward flights will start from 7,500 Avios, instead of 4,500 Avios, plus taxes, fees and carrier charges (“TFCs”) from $5.60 USD.

Which Routes Are Affected?

The routes that are affected are those that begin or end in the U.S. and are less than about 650 miles. Here are a few example of these types of routes, mostly on American Airlines or American Eagle:

Are There Any Cheaper Alternatives to British Airways Avios for Booking These Flights?

Note that paid flights may well be a better deal for some of these flights. Figure out what your British Airways Avios are worth to you (many tend to value their Avios somewhere between 1.5 cents-2.2 cents per point) and check whether roundtrip airfare is more or less than what you'd spend using Avios.

Unfortunately, after the devaluation, this roundtrip will cost 15,000 Avios, bringing the total to $270 + $11, or $281. At that point you may opt to pay for the ticket, unless you're trying to get rid of your Avios.

What about other frequent flyer programs? American AAdvantage charges 12,500 miles each way even on these short flights such as New York LGA to Washington DC DCA, so you'd still be better off redeeming Avios, in case paid fares are very expensive.

What About Other British Airways Short-Haul Flight Awards in Europe, Asia, Australia?

At this point only U.S. flight awards are increasing, no other regions are affected.

Are you planning to redeem British Airways Avios for short haul flight awards at the 4500 each way level before the February 2, 2016 devaluation?