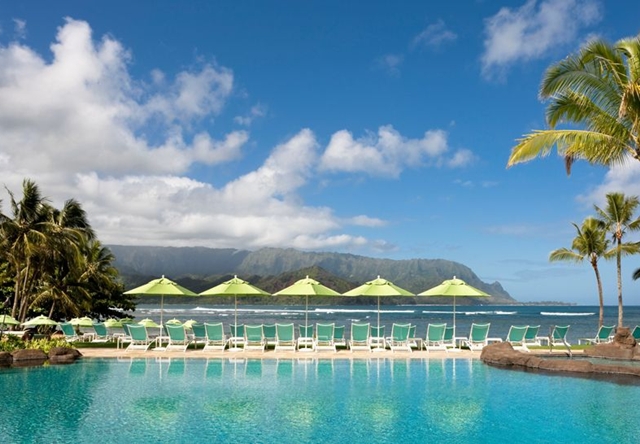 Kauai's top luxury hotels are few on Hawaii's oldest yet lushest island, nicknamed the Garden Isle. Known for its dramatic chiseled cliffs along the Na Pali Coast, beautiful Hanalei Bay and Beach, and wealth of great hiking and adventure from skydiving to horseback riding, Kauai is just as perfect for those who want to relax and unwind away from the crowds of Waikiki or even Maui. Cinema buffs can take in the views of Kipukai seen by George Clooney's character in “The Descendants” with a tour across privately owned Kipu Ranch, or see where Jurassic Park was shot with an air tour of Kauai. Bird watchers shouldn't miss the chance to try to see the akekee, akikiki and puaiohi, three of the most endangered native birds that are likely to become extinct in a few years. Kauai prices are high, so make sure to reserve your luxury hotel through TravelSort if you don't want to overpay:

St. Regis Princeville
The St. Regis Princeville is on Kauai's lush north shore. We won't lie–Princeville is a good 45 minute drive from the Lihue Airport and it rains more here than the south shore–but you'd be missing out on lovely Hanalei Bay, some of the most beautiful views in Kauai, and great hiking if you don't come here. Mountain/Garden View Rooms are the most spacious entry-level luxury hotel rooms on Kauai at 540 square feet, but if you've come all this way, why not splurge for an Ocean View and be lulled to sleep by the sound of waves? We don't recommend the Ocean View with Terrace rooms by the pool, however, as they can sometimes be noisy and not very private. Enjoy the requisite St. Regis amenities, such as Remede toiletries, dual vanities, plush bathrobes and slippers,  iPod dock and home theater system, and evening turndown service with complimentary bottled water. One of our favorite aspects of the St. Regis Princeville is Halele'a Spa. It's not as large or extensive as Anara Spa at the Grand Hyatt Kauai, but the therapists and Hawaiian-inspired massages in particular are superb, and it's a welcome blissful escape after a long day of hiking, watersports, or other exploring. 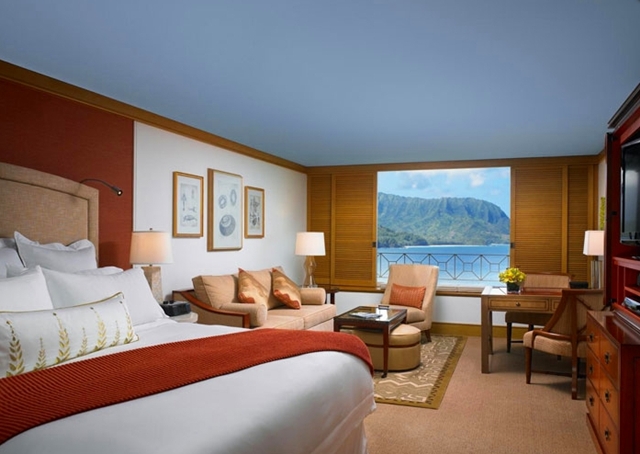 Koa Kea
If you're dreaming of a romantic Hawaiian vacation a deux in a cozy boutique hotel right on the beach, Koa Kea is your place. Don't be put off by the unassuming, almost motel-like exterior: it's the only remnant of the hotel's former incarnation as the Poipu Beach Hotel, which was nearly destroyed by Hurricane Iniki back in 1992. By keeping the exterior intact but completely gutting and renovating the interior, Koa Kea's owners were able to keep the hotel just a few yards from the beach, instead of having to site the hotel farther inland as new local building ordinances require. Rooms are 362 square feet but stylishly finished with plush pillowtop beds swathed in Anichini Egyptian cotton linens, down pillows, and turquoise throw; L'Occitane bath amenities; 42 inch flat screen TV and Nespresso machine. With just 121 rooms, Koa Kea has only one on-site restaurant, Red Salt, but it's one of Kauai's best. Seafood lovers should try Opah if it's featured as a special, or the Big Island Vanilla Bean Seared Mahi with forbidden black rice, avocado ginger salsa and mango vinaigrette. For breakfast, don't miss the Lemon-Pineapple Souffle Pancakes. 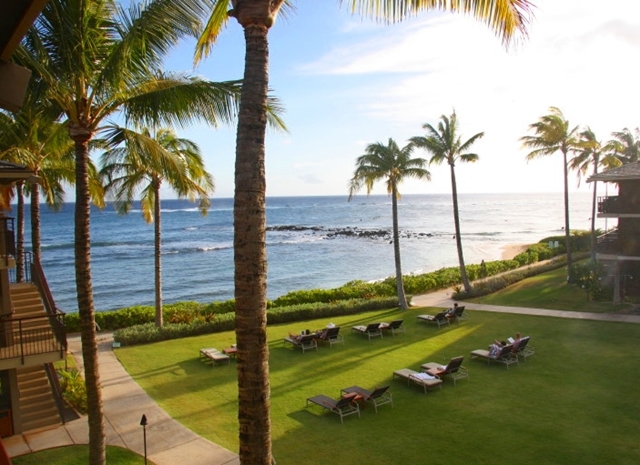 Grand Hyatt Kauai
The Grand Hyatt Kauai is Kauai's largest resort, and the perfect choice for families and active couples, with its sunny location in Poipu and incredible facilities. Four 24-hour pools include a lazy river pool with waterfalls, lagoon with water slides, salt-water lagoon with sandy bottom for kayaking, and an adults-only pool. There's beach access (although the rough surf makes it better for boogie boarding than for swimming) and also tennis, a well-equipped fitness center, and Poipu Bay Golf Course just a five minute walk away. Rooms are very spacious, with even entry level rooms 500 square feet, though Hawaiian Plantation-style decor may not be to everyone's taste. There's no shortage of dining options, with eleven choices on-site, ranging from upscale Italian at Dondero's and family favorites at open air Ilima Terrace to Pan-Asia dishes at Yum Cha and kid-friendly pizza and sandwiches at The Dock. Be prepared for sticker shock, however; you may want to get off-property to explore other local haunts on Kauai's south shore.
Want to stay 4 nights at the Grand Hyatt for just $150? Apply for the Hyatt Card and you'll receive 2 nights in any Hyatt in the world; if your spouse or partner also applies, that's 4 nights for just the $75 annual fee on each card, for $150 total. If either of you are a Hyatt Diamond, the 2 complimentary nights will be in a suite. 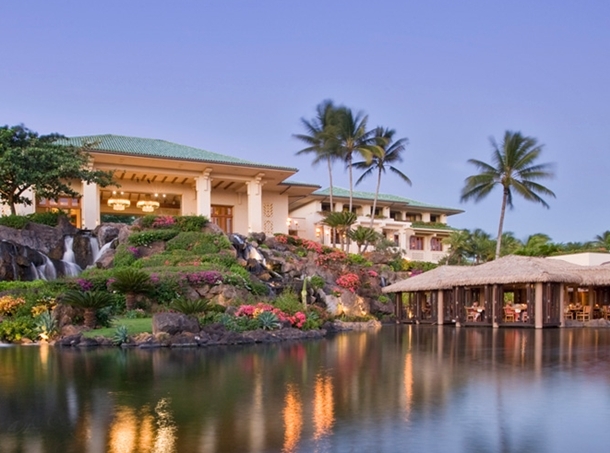 Getting to Kauai with Miles and Points
There are nonstop flights to Kauai (LIH) from a few airports:
LAX: United, Delta and American
SFO: United
PHX: US Airways
SEA: Alaska Airlines
From other cities, you'll need to to fly to Honolulu or Maui, then take an interisland flight to Kauai, most likely on Hawaiian Airlines.
For United award flights from the East Coast, you could either try for an award in BusinessFirst on the EWR-HNL nonstop (hard to get) or if you're willing to stop on the West Coast you could take a PS flight with lie-flat seats to SFO or LAX, then a BusinessFirst flight to Hawaii. The best way to earn United miles is with signup bonuses from the Ink Bold, Ink Plus or Sapphire Preferred cards, because Ultimate Rewards points transfer 1:1 to United miles.
American Airlines award flights from the West Coast are cheapest using British Airways Avios points: just 12,500 one way or 25,000 roundtrip in coach.
If you have an Alaska Airlines companion voucher issued before 8/1/12 from the Alaska Visa, you can use it for first class; if it's issued 8/1/12 or after, it's valid for economy only.

Where to Stay on Maui: The Best Luxury Hotels