To follow up on my Q & A post from last month, I figured another one of these posts would be useful. Here are answers to just a few of the questions I’ve received either on my blog, in the comments section on TravelSort, or by email:

1. Who has the best long haul premium economy product?

Solely in terms of seat comfort, most airlines that feature premium economy products seem to be more or less equal. Yes, it all depends on the aircraft type, but on the whole I don’t think one stands out as being the most comfortable fleet-wide. That being said, some airlines do stand out on the services they offer. For example, Air New Zealand offers Premium Economy passengers premium check-in, which many airlines don’t. Furthermore, Premium Economy passengers are actually served business class food, which is fairly rare.

That being said, Air New Zealand’s brand new 777-300 aircraft are pretty revolutionary when it comes to premium economy products on a few levels. First of all, the aircraft are equipped with their new Premium Economy Spaceseat, which is in an entirely different league when it comes to personal space. The cabin is equipped with a simple “2-2-2” layout (meaning there are only six seats across, as opposed to nine seats across, as is the case with their current premium economy product on the 777-200), with seats facing slightly away from each other, making it a much more private product. Furthermore, while it’s not formally a premium economy product, Air New Zealand’s new Economy Skycouch is absolutely brilliant, in my opinion. Basically two passengers can buy a set of three economy seats which are specially configured with footrests so that they can turn into a “couch.” If you’re traveling with a loved one and aren’t too tall, it’s an unbeatable deal, since it’s priced much lower than just about any premium economy product. 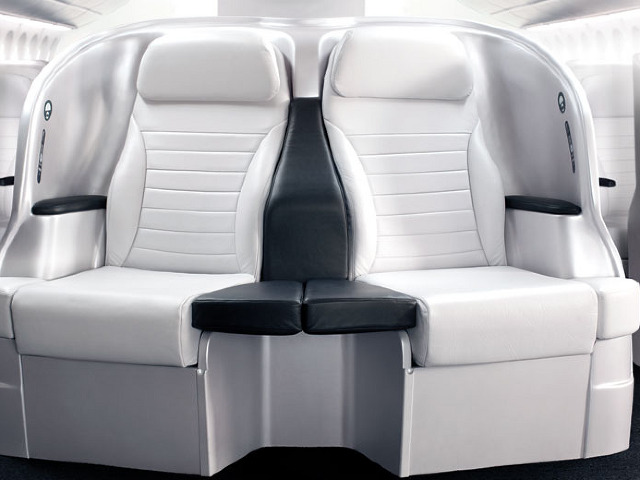 2. What are the best ways to expedite security in the U.S.? For example, is it worth it to pay the money for CLEAR?

CLEAR sounds nice in theory and has a lot of potential, though in its current form is quite useless. Since they emerged from bankruptcy and are under new management, they’re only currently set up at two airports: Denver and Orlando. To 99.9% of passengers, they might as well not exist. So as of now, they’re definitely not worth the money.

Even if CLEAR were more widespread, I don’t think it would be worth the money. Airport security, for me at least, is all about being smart when it comes to getting through the checkpoint. Don’t always instinctively pick the shortest line. When I get to the checkpoint, there are three things I consider. First of all, I look at how many separate security lanes each line leads to. While there might only be two “lines,” one checkpoint might lead to two security lanes, while one might only lead to a single lane. So don’t instinctively always just go with the shorter line. Second, avoid the line with the full body scanners whenever possible, and not just for privacy reasons. Some airports still have x-rays in some lanes, or sometimes have full body scanners in all lanes, but only use them selectively. The full body scanner lane will almost always take longer than the x-ray lane, since it takes longer for each passenger to be screened. Lastly, I “profile” the people in each line. While I have nothing against families and senior citizens, they’ll almost always take longer than the business “crowd.”

And as a piece of general advice, always have everything out of your pockets before you reach the checkpoint. When I’m in the hotel shuttle or parking garage shuttle on my way to the terminal, I always already place my cell phone, keys, and wallet in the front pouch of my laptop bag, make sure my liquids bag is easily accessible, and put my ID in my pocket. Not only does it speed up the process, but more importantly it ensures you don’t lose anything at the checkpoint.

3. I tried to redeem the $400 United bump voucher I received online and I couldn't! I had no idea that I'd have to phone in and then actually send in the physical vouchers, or make the reservation at the airport. Which do you normally do, and is this the case with all airline bump vouchers, or only United's?

For many travelers this is indeed an unpleasant surprise. All of United’s denied boarding compensation vouchers come in paper form, and it’s quite intentional. When determining how much they’re willing to oversell flights on average, United is no doubt factoring in the cost of denying passengers boarding. I’d bet a pretty good chunk of these vouchers don’t get redeemed just because they aren’t electronic, be it because people are too lazy to ticket by mail or at the airport, or maybe even because people misplace the vouches.

That being said, United does give you options, since you can either redeem the vouchers by going to the airport to present them, or by mailing them to United. Either way, there’s no ticketing fee (unlike American, which has paper vouchers that can’t be redeemed online, yet still charges you the airport ticketing fee). Since I’m at the airport at least a couple of times a week, I never have a problem ticketing them at the airport, though either way I would go out of my way to ticket them at the airport for a couple of reasons. First of all, I don’t trust the post office. More importantly, though, the reservation isn’t ticketed until United receives the voucher and processes everything, which can take well over a week. Upgrade priority is determined partly by when you ticket the reservation, not to mention when I’m trying to apply a confirmed upgrade to a reservation, I have to wait until the reservation is ticketed. Going to the airport to ticket could be the difference between confirming the upgrade immediately and being waitlisted and possibly not clearing.

As far as the policies of other airlines go, Continental and Delta issue electronic vouchers which (conveniently enough) show up attached to your frequent flyer accounts. American and US Airways, on the other hand, still issue paper vouchers for denied boarding compensation.

It will be interesting to see what system the new United adopts. I expect that for the rest of the year nothing will change (United vouchers will only be valid for travel on United marketed flights, while Continental vouchers will only be valid on Continental marketed flights), though I expect by early next year we’ll be able to use vouchers on either airlines. When the merger is complete I’m guessing Continental’s system will be adopted, since on the whole they have the more competent IT infrastructure.

4. I'm a Premier Exec on United and got a seat assignment in Economy Plus. Somehow, my seat assignment was later changed (although I never received any kind of notification) to regular Economy. I was very disappointed; how do I stop this from happening in the future?

As sad as it might be, the only way to ensure your seat won’t be changed is to constantly monitor your itinerary online. There are several things that can trigger a seat change. For one, always watch out for the dreaded “schedule change” text online when viewing your reservation. As illogical as it is, if the flight times stay the same and the flight number changes, or if the flight times change by just a few minutes, they could reset all the seat assignments on the flight. If there is an aircraft swap a few weeks out, you might retain the same seat number, but instead of having an Economy Plus exit row seat, you have a seat in regular economy as a result. So it’s absolutely key to always monitor your itinerary online, which should help prevent any seat changes more than 24 hours before departure.

Within 24 hours of departure, keep in mind that once you check-in online, you can only change your seat assignment via the online check-in page or at the airport. If you go to your general reservations page online and change your seat assignment, it won’t actually be reflected on your itinerary since you already checked in. Then there’s one other instance where your seat could be “reset,” which is probably best explained in an example. On Saturday I was flying from Washington Dulles to San Francisco to San Diego. My upgrade was waitlisted for both flights, though the Washington Dulles to San Francisco upgrade cleared about four hours before departure. Whenever an upgrade clears after check-in but before I get to the gate, an agent has to manually “offload” me and then check me in again. In the process, my seat assignment from San Francisco to San Diego was reset as well. I only noticed this when checking the seatmap online (the seat I had reserved showed as being unoccupied), so I had to have the agent go back and correct it.

Now, in some cases, a seat change is almost inevitable. A few years ago I was flying from Chicago to San Francisco, which was scheduled to be a 747, and I was confirmed in upper deck business class. What rolled up to the gate? A Ted Airbus 320. It was quite a shocker for the 200 or so people that suddenly didn't have seats! 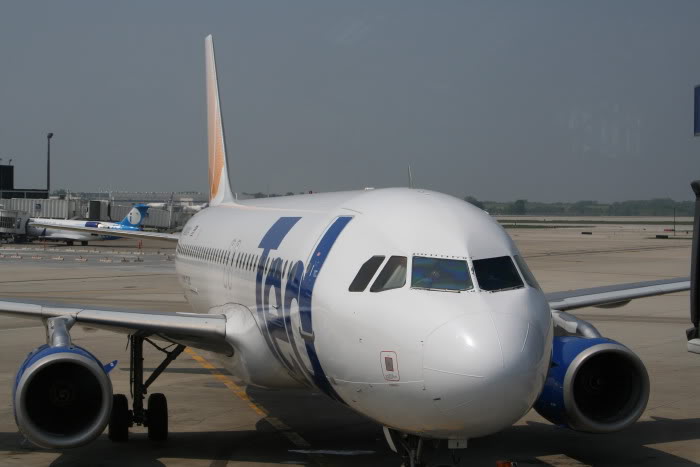 5. I booked a ticket using a United E-Cert, which covered everything except taxes, which I paid. The flight credit, however, never posted to my account so I called in, and was told by the agent that I wasn't eligible for flight credit because it was a free ticket. Shouldn't I be entitled to miles, and if so, how do I get them?

You absolutely would be entitled to miles. Even if your base fare is zero (and you just pay taxes), you are booked into a revenue fare bucket when you use an electronic certificate issued by United. As we like to say, “hang up and call again,” which is good advice in just about any instance where you don’t get a satisfactory resolution.

6. You've posted about airports with great amenities. Which airports do you go out of your way to avoid, whether because of poor on-time records, poor quality lounges or other amenities, or other reasons?

This is a funny question for me, because I actually go out of my way to fly through airports that have poor on-time records, frequent weather issues, etc., because it greatly increases the chances of getting “bumped.” Furthermore, I find a lot of the worst airports to be on the east coast, which is also where I try to connect to earn the most miles (since it nets the most miles when flying to the west coast).

That being said, I’ll answer with the intent of the question in mind. Probably my least favorite airport, and also the airport I frequent most often, is Washington’s Dulles Airport. United operates out of the C & D concourses, which were built in 1983 and were intended to be temporary. They’re basically glorified trailers (literally), and unfortunately they’re still around. The ceilings are low, the airport is noisy, and there’s always a shortage of seating. The Red Carpet Clubs are always full as well. 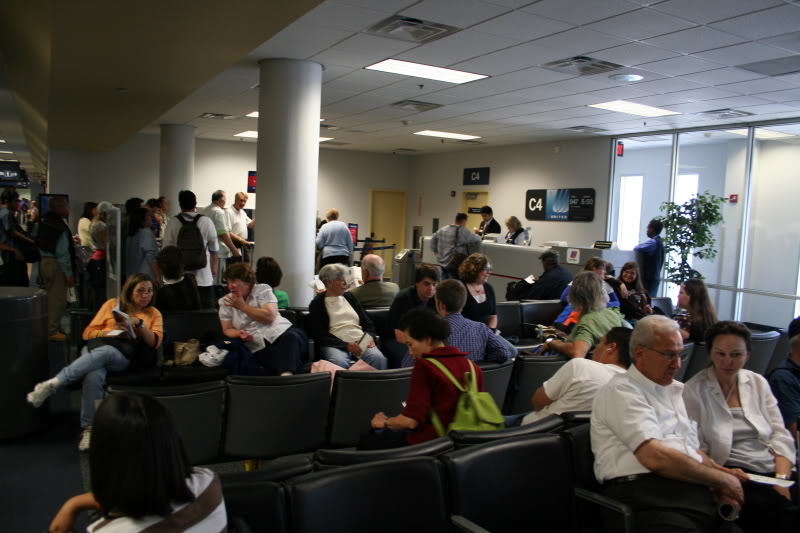 Another airport I can’t stand is New York’s JFK. While there’s something exciting about how “international” it is, the immigration lines are usually a mile long and making a connections is a total pain, requiring not only re-clearing security, but taking the AirTrain between terminals as well.