Shame on Alaska Airlines for Enabling a Passenger to Continue Harassing Women, Even After Multiple Women Complained. It took Randi Zuckerberg, Facebook CEO Mark Zuckerberg's sister, to report sexual harassment on Facebook and Twitter, and the subsequent shares and retweets, for Alaska to finally respond.

In Zuckerberg's own words, on Wednesday, November 29, she was on a flight from Los Angeles to Mazatlan in Alaska First Class when the male passenger next to her “began making explicit, lewd, and highly offensive sexual comments…he started talking to me about touching himself, kept asking me if I was fantasizing about the female business colleague I was traveling with, rated and commented on the women's bodies boarding the aircraft as they walked by us…”

That's obviously offensive, so Randi Zuckerberg brought it to the attention of the Alaska flight attendants, and this is the part that's really galling: they admitted that the passenger was a regular on this flight, that they've had to talk with him in the past about his behavior, and asked Ms. Zuckerberg not to take it personally.

To add insult to injury, when Ms. Zuckerberg told them again that this passenger's behavior was making her extremely uncomfortable, the only option they offered was for her to be reseated in Economy Class, in a middle seat. Mind you, they didn't offer to move the offending passenger back there–only her. What the heck?!

Then the flight attendants proceeded to serve the harasser multiple alcoholic beverages, who continued his harassment and made choice comments such as “Millennial women just aren't willing to give some booty to get a job anymore.” 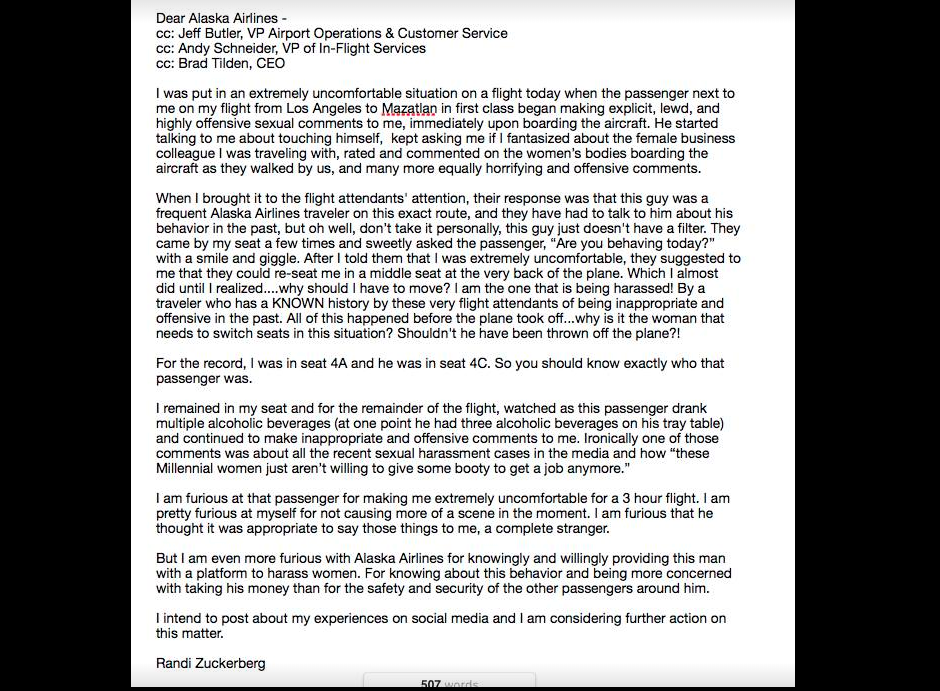 Unfortunately, as the current cases in media, Hollywood and many other industries show, Zuckerberg's experience is not unusual. Nor, perhaps, is Alaska Airline's head in the sand response–until social media forced it to confront the issue, at least for this particular incident.

What's particularly infuriating is the flight attendants' response. As at least one study has shown, many women in an actual real world case of sexual harassment experience fear and are intimidated from confronting their accuser (while in a hypothetical situation they know not to be real, women are far more likely to not experience these feelings and to confront the harasser). But Randi Zuckerberg did come forward, twice, yet was rebuffed both times by the Alaska flight attendants, who made excuses for this regular passenger, presumably due to his Alaska Airlines frequent flyer status and spend with the airline.

A great deal of sexual harassment is about power, and harassers know this. When you wonder how it's possible that Harvey Weinstein, Kevin Spacey, Roy Moore, Donald Trump and others thought they wouldn't eventually be accused and face consequences for their harassment, it comes down to power. They assumed that their greater professional power relative to their victims would keep victims from ever coming forward, or that if a single victim spoke up and it came to he said/she said, the victim would face credibility issues.

Clearly the Alaska Airlines flight attendants felt the power imbalance, but that in no way excuses them from not finding a better solution than offering to downgrade Ms. Zuckerberg to a middle class seat in Economy. Airlines have a duty to protect passengers from harassment and violence by other passengers, and continuing to ply a harasser with alcohol doesn't exactly improve matters. Many flight attendants don't feel empowered to speak out against their own sexual harassment, but perhaps with the spate of high profile sexual harassment cases, this will change.

Currently, Zuckerberg reports that Alaska Airlines is conducting an investigation and has temporarily suspended the passenger's travel privileges. My bet is that Alaska will reinstate them after this “investigation” and after they feel the social media firestorm has cooled sufficiently, and that no real lasting changes will take place (unless Zuckerberg files a law suit and/or Alaska Airlines' missteps start costing the airline significant money) but I hope I'm wrong.

Have you witnessed sexual harassment on a flight, or know someone who has?

Who Gets the Best Service on Airlines?