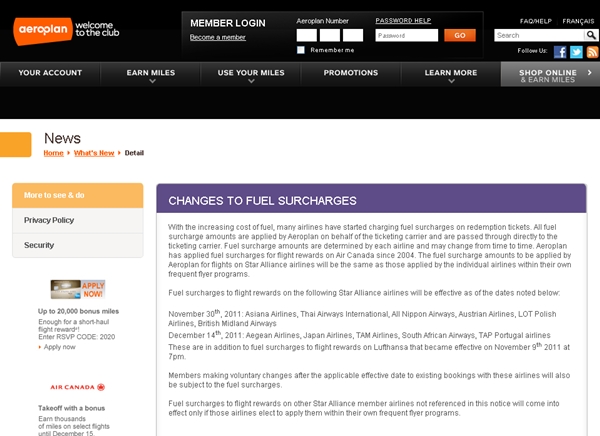 Well, unfortunately, Aeroplan yesterday posted that fuel surcharges will be imposed on most Star Alliance partners, according to this schedule:

These are in addition to fuel surcharges to flight rewards on Lufthansa that became effective on November 9th 2011 at 7pm.

Members making voluntary changes after the applicable effective date to existing bookings with these airlines will also be subject to the fuel surcharges.

Fuel surcharges to flight rewards on other Star Alliance member airlines not referenced in this notice will come into effect only if those airlines elect to apply them within their own frequent flyer programs.”

So if you were planning to use Aeroplan miles toward an award on Asiana, Thai, ANA (all great first class products) you only have a couple weeks to avoid fuel surcharges.

Interestingly, Swiss and Singapore aren't mentioned, even though their respective frequent flyer programs do apply fuel surcharges. Don't wait for the other shoe to drop though–if you want to fly Swiss first class, you might want to start researching Montreal-Zurich award availability now (see Airlines and Routes with First and Business Class Award Availability for Europe).

I suppose we should be grateful for even the two week and 1 month notices, given that Lufthansa fuel surcharges were imposed without any notice, but it's still incredible how much Aeroplan has devalued, in just a few months:

Suffice to say, you probably will want to change any hotel points that you're currently crediting to Aeroplan to  be credited elsewhere, and redeem Aeroplan miles for awards before these additional Star Alliance partner fuel surcharges go into effect.