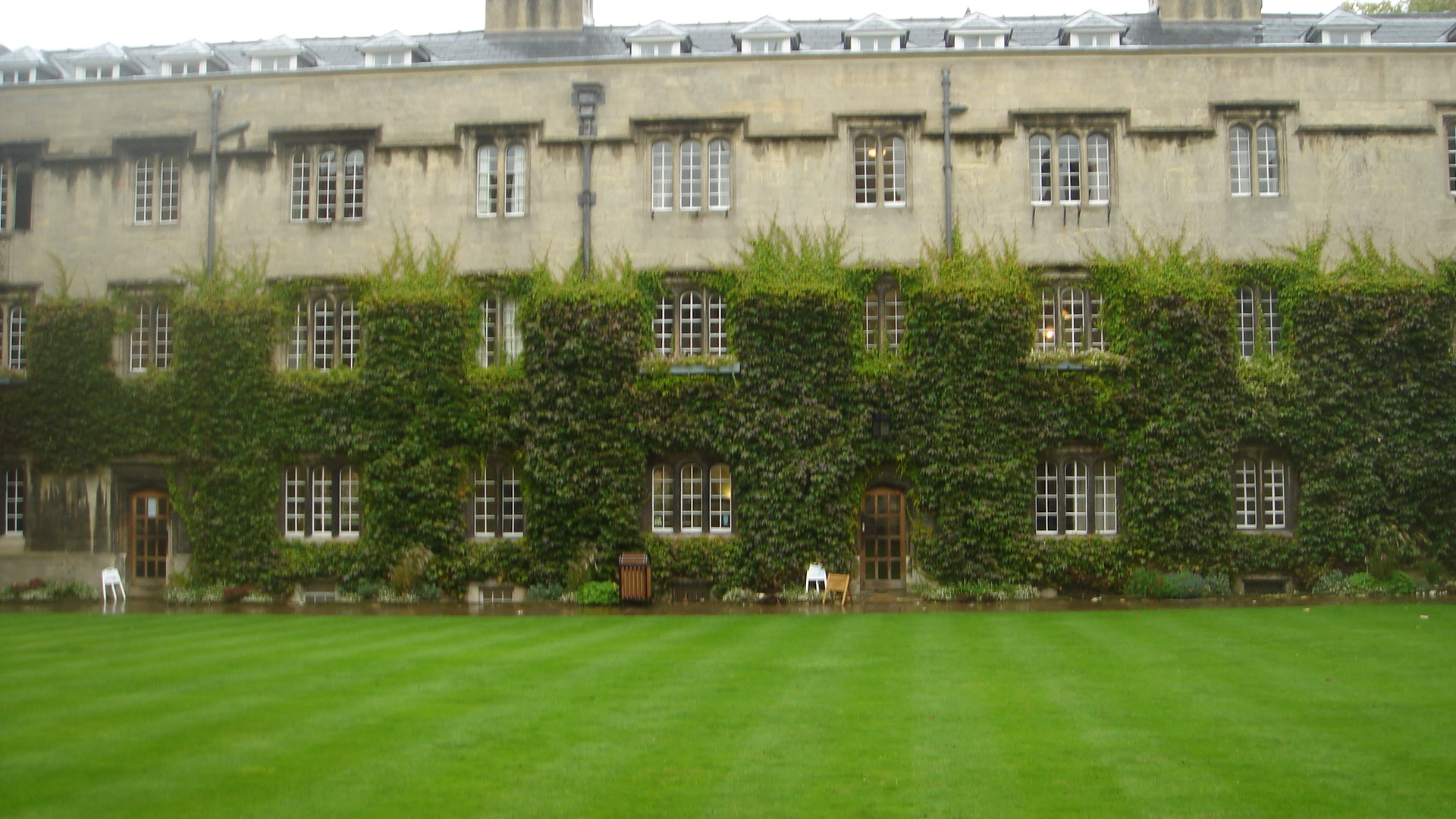 Oxford’s poetic name – “The City of Dreaming Spires” – is a clue in itself that the English university town is the perfect romantic haven. Likely a combination of the soaring architecture, thousands of fresh-faced university students testing their new freedoms, and the millions of books that record the romantic pursuit of knowledge found in over 100 libraries across town, Oxford’s romantic nature is sure to charm any traveler passing through.

I spent the last year in Oxford, and though at first the city’s romantic charms surprised me, I soon became used to the way the meandering cobblestone streets, the green quads lush from English rain, and the off-sync chiming of the various cathedrals and clock towers all help compose this wonderfully dreamy town.

You don’t have to be a young student in love to enjoy the charms of Oxford; with easy access from London (a one hour train ride or 90 minute bus ride), Oxford is the quieter alternative for couples of all ages seeking both a relaxing and alluring travel experience.

As I mentioned, part of Oxford’s appeal is its proximity to London. You can easily stay in London – where some of the best luxury hotels are – or you can, of course, bunker down in Oxford itself.

The Randolph Hotel has a stately address on Beaumont Street, across from the Ashmolean Museum, and its rooms provided a quintessential old-fashioned experience. Request a room on the top floor for a little extra removal from the hustle and bustle of the street traffic below. The Randolph is also the closest fine hotel to the Oxford bus depot. 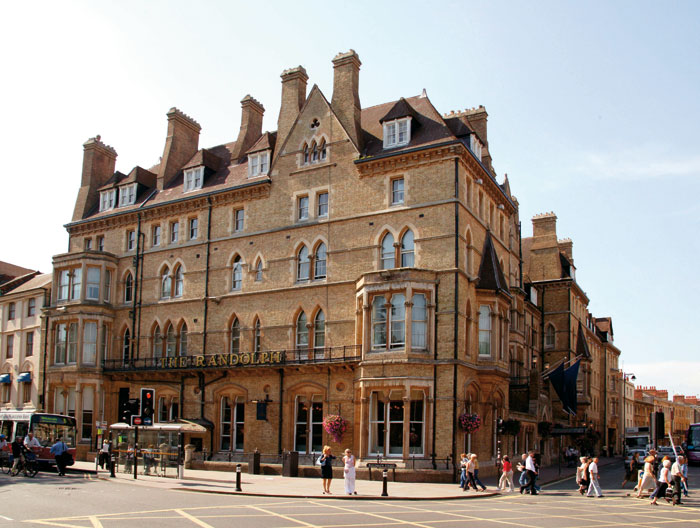 Perhaps a more charming option is the Old Parsonage Hotel on St. Giles, a quaint venue that also serves a noteworthy high tea. I think the greatest advantage of the Old Parsonage Hotel is its location directly across the street from University Parks, a swath of land with beautiful paths for strolling and watching the university students play football, cricket, and other popular sports. 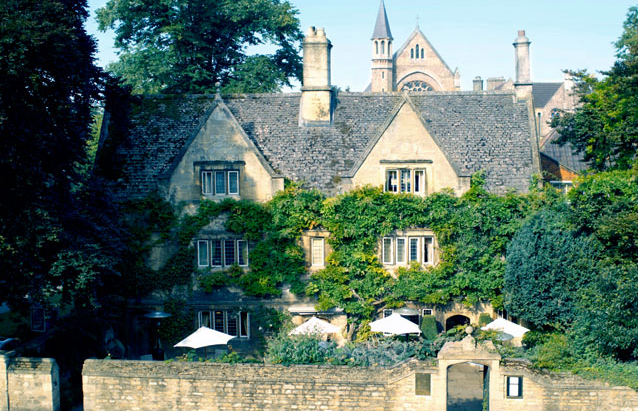 Though the English are not known for their culinary wow factor, one of Oxford’s greatest surprises is the number of great restaurants and cafés in town. The city is filled with trendy eating spots at a range of prices.

Arguably the most romantic dining experience can be found at The Cherwell Boathouse. Set aside from the hectic downtown area and perched on the banks of the Cherwell River, the restaurant also serves as a punt station in the warm weather. One of my favorite dishes is their pigeon and venison salad starter, an unexpected variation on typical first course fare. The restaurant’s intimate interior manages formal elegance without any of the extreme stiffness you might fear from a fine English dining room; the menu changes by season, and when I dined there in the summer months, it was not uncommon to see families and couples paddle by in canoes and punts through the window view. 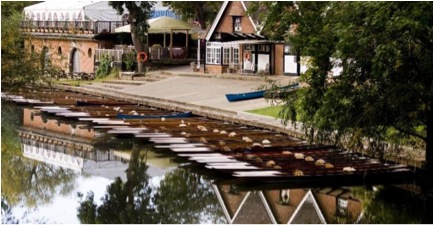 Another delicious spot for two is Pierre Victoire, a French restaurant in the Jericho neighborhood of Oxford, just north of city center. Their chocolate hot pot dessert is a must, and their wine list is both affordable and impressive. Cozy during any season of the year, the casually refined dining room features an array of tables nicely spaced out for private conversations. My favorite part, though, of going to Pierre Victoire is its location on Little Clarendon Street – a charming avenue just opposite St. Anne’s College that is strung with white lights year-round.

The most romantic place to grab a drink in Oxford is in the northernmost neighborhood of the city, Summertown, where you’ll find the Summertown Wine Café. Completely off the beaten path, the Wine Café has a list of wines by the glass and bottle that only a group of true wine lovers could have compiled. Their staff is incredibly friendly and informative; you can expect generous taste tests before you make any purches. The wine café has a beautiful, lofty lounge to enjoy your wine with your loved one, as well as a greenhouse-style annex off the back patio where you can literally seal yourself off from the rest of the world.

What to Do in Oxford

Teatime is a beloved tradition in the UK, and if there’s one thing Oxford does well, it’s traditions. Cozy up for high tea at Vaults and Gardens, a café located beneath the University Church of St. Mary, for the best scones I have ever tasted, complete with jam and the requisite clotted cream.

When you’re done with your tea, climb to the top of the University Church for a stunning view of not only the famous and dazzling Radcliffe Camera library, but also the entire town with its surrounding fields, rivers, and in the summer, fertile greenery. Entrance to the tower is £3, but and the 360-degree panorama at the top is well worth the trip up the winding, historical staircase. 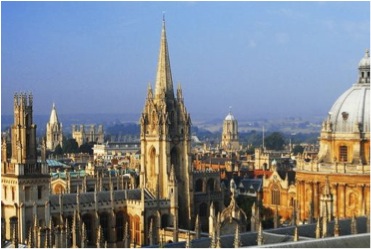 In the summer months, rent a punt and tour the Cherwell River, winding your way from the banks of University Parks down to Christchurch Meadows, where you can see cows grazing in the shadows of the famous Christchurch College towers. Don’t forget to take along Pimm’s and lemonade (the traditional punting mixed drink) in your picnic basket.

Go for a stroll in Port Meadow, accessible via Walton Well Road in Jericho, where paths give way to flood-meadows along the banks of the Thames River. Walk along the river path to view the houseboats or make your way across the meadow, where the sun sets over the field like a scene from a picture book. 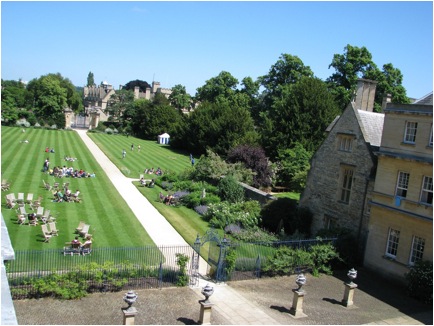 Of course, touring the Oxford University colleges is the best way to get a flavor of the city’s majestic scholarly traditions. You will find that each college is its own little universe, with their own coat of arms, own beautiful buildings (some as old as the 13th century!), and individually designed gardens and quads. The buildings and grounds of Trinity College on Broad Street and Merton College on High Street are two of my personal favorites. 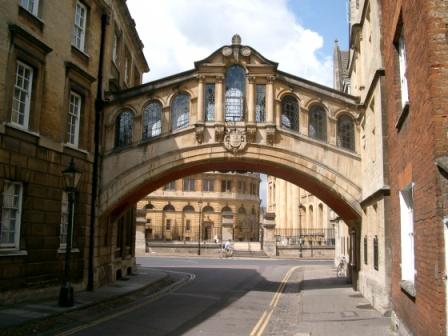 Just beyond the Bridge of Sighs, reward yourself with a pint at the Turf Tavern – one of the oldest pubs in town where you’re sure to feel like a real part of the Oxford crowd.