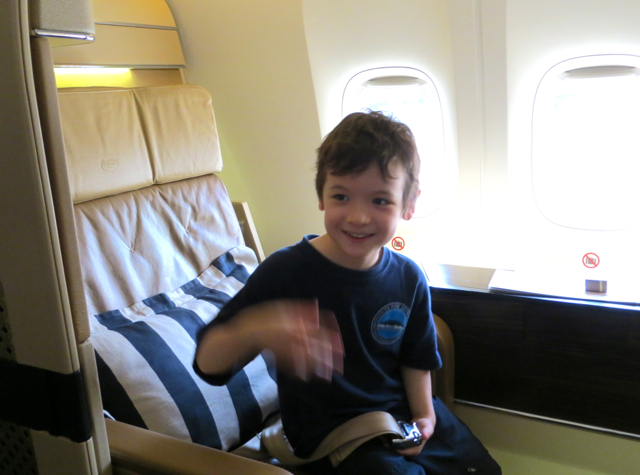 We've just done over 20 hours of door to door travel, and while my husband and I are exhausted, our son was preternaturally energetic and it took some time to get him to go to bed. Nor is he an exception–when we talk to friends, almost without exception they agree their kids travel better than they do. How ironic, then, that avid travelers wonder if they're going to have slow down the traveling once they have kids. Yes, they may have to, but not for the reasons they think: it has more to do with school schedules. Kids are actually great travelers, better than most adults, due to some built-in advantages:

Despite his protests about going to bed, my son can fall asleep almost anywhere when he’s tired enough. And once asleep, he sleeps far more soundly than I do. This is ideal on a long plane flight, and I’m often envious when, after tossing and turning awhile, I look over and see him sound asleep, not even stirring when someone coughs or snores loudly. That means he gets some sleep on the flight on a long 13+ hour daytime flight and isn't overtired once we arrive, and can stay awake until a normal bedtime hour at the destination. Or if it's a night flight, he usually gets close to a full night of sleep.

We’ve noticed that our son tends to adjust to a new time zone more easily, and also adjusts back to our own time zone faster than us when we return home. It turns out there’s a scientific reason for this: kids’ eyes let in more light than adults’ and that helps them adjust to a new time zone faster. I’m sure that their generally higher energy expenditure and activity levels also help–if we still have daylight hours left when arriving at a new destination we try to get to playground or otherwise exercise in natural light. But on the flip side, this also explains why many older adults suffer to some degree from insomnia or have trouble getting to sleep.

Kids often are also less shy about using a new language than adults are—they’re less worried about making mistakes, and plunge in and use what they know, getting their meaning across even if it’s not 100% grammatically correct. After all, that's how we all learn our native language–by trying words, then sentences out, being corrected, and trying again. You won't find a toddler worried about whether s/he's pronouncing a word correctly or using a valid construction of the future tense .

There are certain things that cross cultures, such as music, dance, art…and kids. So many of the conversations I’ve struck up with locals when traveling have been because they first start talking with my son, or they ask me about my son, mentioning they also have a child.

When they’re little, kids don’t even need a language in common to play together. One of my earliest memories is playing with some French girls at a playground in France. Similarly, my son had a great time hiking with the daughter of some French friends, even though it was before he started learning French.

Particularly if you travel a great deal for work, it's easy to become a little jaded. Another airport lounge…another business class flight…another luxury hotel. One of the joys of traveling with kids is that so much is still new to them, and it's interesting what they focus on. I'll never forget the look of pure joy when our son tasted watermelon juice in the Maldives for the first time. Or his amazement when he saw some of the bioluminiscent plankton, with brilliant points of light that were like stars in the night sky. As gorgeous as the atolls, resorts, and amenities are, these two discoveries made the trip for him.

Similarly, while many of us don't necessarily remember the delicious fresh fruit or pastry welcome amenity a hotel may have provided, my son treasures his menagerie of stuffed animals, each one from a different hotel we've been to, ranging from a manta ray from the Four Seasons Bora Bora to a panda from Four Seasons Hong Kong. There's even an army tank egg holder from the Milestone Hotel in London, and the fake egg that comes with it has been seen recently in some pranks (never underestimate the mischeviousness of a 9 year old boy). In fact, one of his favorite things about after first checking into a hotel room is finding new places to hide before jumping and and surprising us.

If you have kids, do they travel better than you do?

Pokemon Fan? Stay at the Peninsula Tokyo for a Unique Pokemon Experience