Perhaps for all the wrong reasons, I sometimes want to return to a city just to stay at a certain hotel again. Be it the service, view, or décor, there are lots of amazing “destination” properties out there. At times my decision making process is complicated somewhat by my addiction to hotel loyalty programs. So admittedly my list of hotels is a bit skewed to certain hotel chains, and at the same time I’m probably missing out on some great hotels due to my loyalty. But that doesn’t prevent me from having a few favorites, and some of them may surprise you. In no particular order, here’s my list:

I know this one might be a shocker, but it’s not just about the hotel, but also the view. The hotel is actually really nice, though. It’s modern, has a great location, and a very nice restaurant in the lobby. But Queenstown is probably my favorite place on earth. While I’m usually a city guy, Queenstown is a smaller town, but not so small that it’s isolated. I think it’s fair to say that Queenstown is one of the few places I can actually relax without going crazy out of boredom.

I love good views, and the views from the Crowne Plaza are genuinely breathtaking. Be sure to get a room overlooking Lake Wakatipu, and you probably won’t even leave your room. The sunrises and sunsets are spectacular, and if you’re like me and like to sleep while on vacation, go during (the southern hemisphere’s) winter and you can see both the sunrise and sunset and still get about 16 hours of sleep at night! 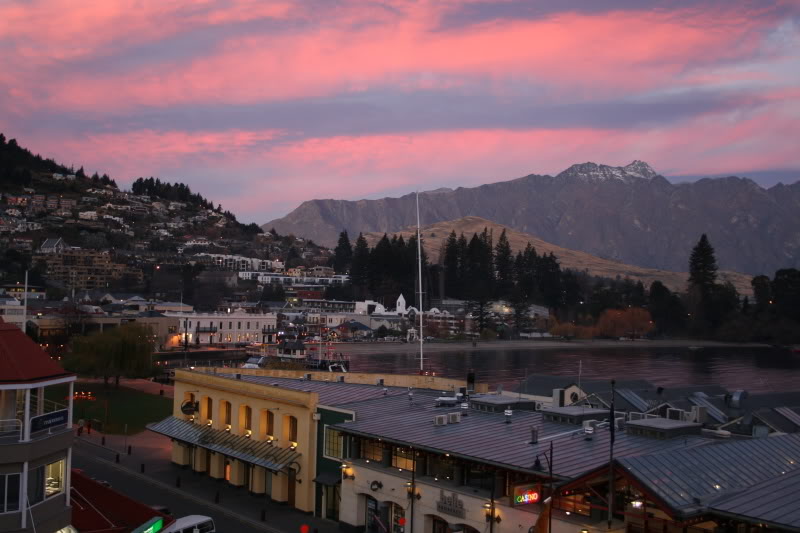 While the Crowne Plaza has views of natural beauty, the InterContinental Hong Kong probably boasts the most spectacular harbor and city views in the world. The InterContinental is located in Kowloon, right on Victoria Harbor. Hong Kong has one of the most impressive skylines, and it’s even easier to enjoy thanks to the harbor separating the two sides of Hong Kong, making for amazing views along the waterfront. As if the skyline isn’t great enough, Hong Kong also has the “Symphony of Lights,” a nightly light and laser display, accompanied by music. Dozens of buildings in Hong Kong light up, and there’s no better place to catch the action than the InterContinental Hong Kong, which is prime real estate for the show. The rooms with the best view in the hotels are the junior suites ending in “16.” Obviously the higher the floor the better, but those are located in a bend of the hotel, so have the most expansive views. 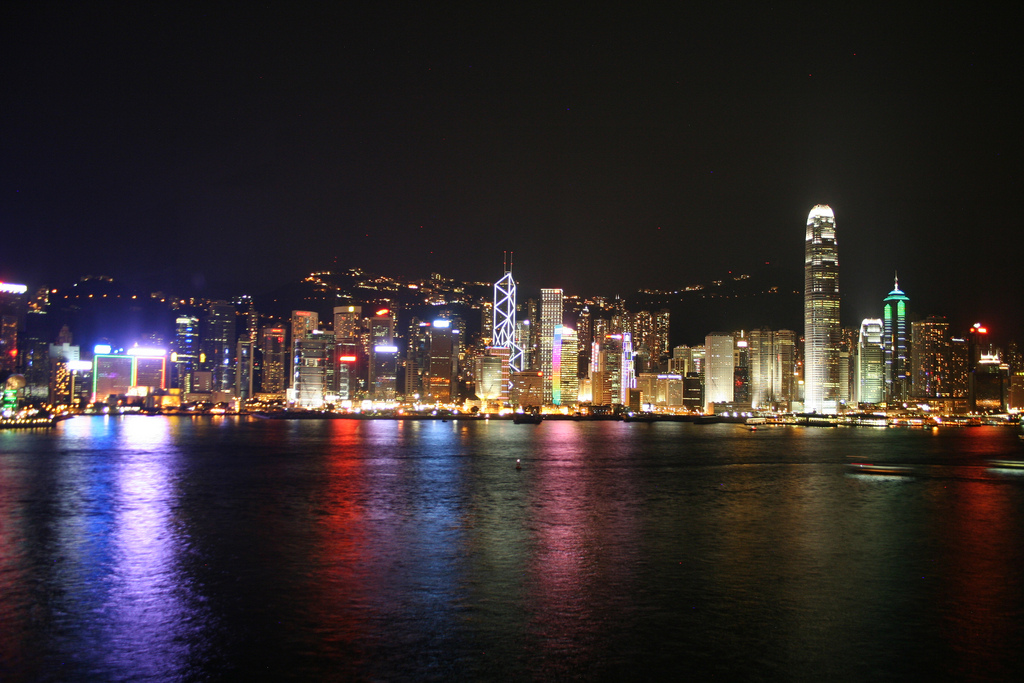 Not surprisingly, the service is pretty amazing too. I think this hotel also gets my vote for the best club lounge for a city hotel. The Club InterContinental overlooks the lobby, and has the most impressive breakfast spread, afternoon tea spread, and evening spread I’ve seen in a club lounge at a city hotel. They even serve Diet Coke in ice buckets. Need I say more? 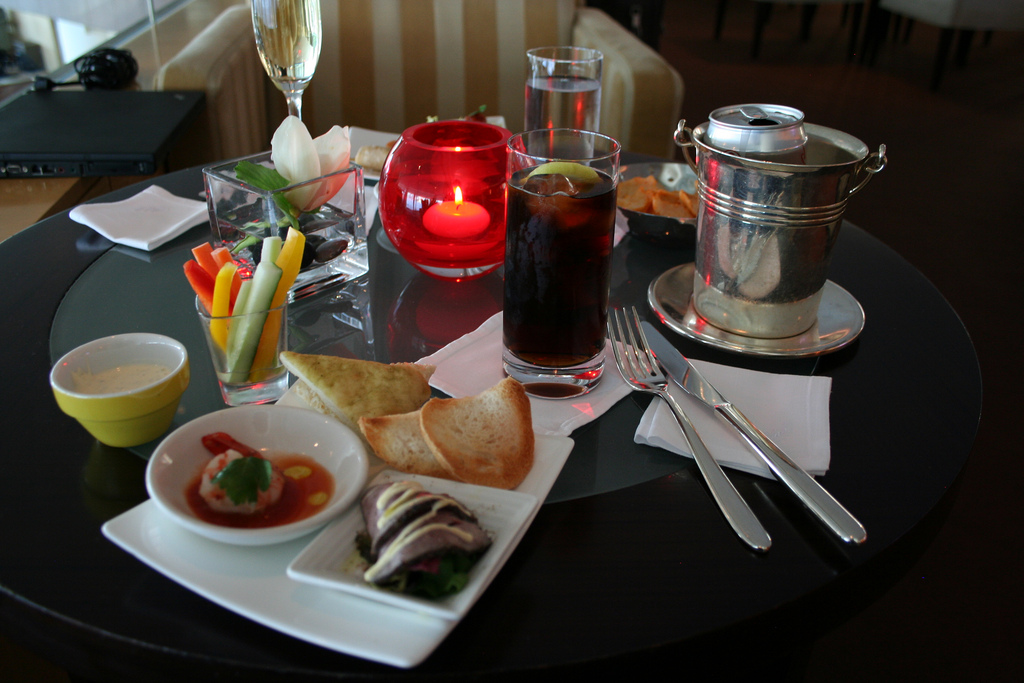 And one last tip about this hotel. The views from the hot tub are amazing. It’s located on the roof, overlooking the Avenue of Stars and Victoria Harbor. Amazing! 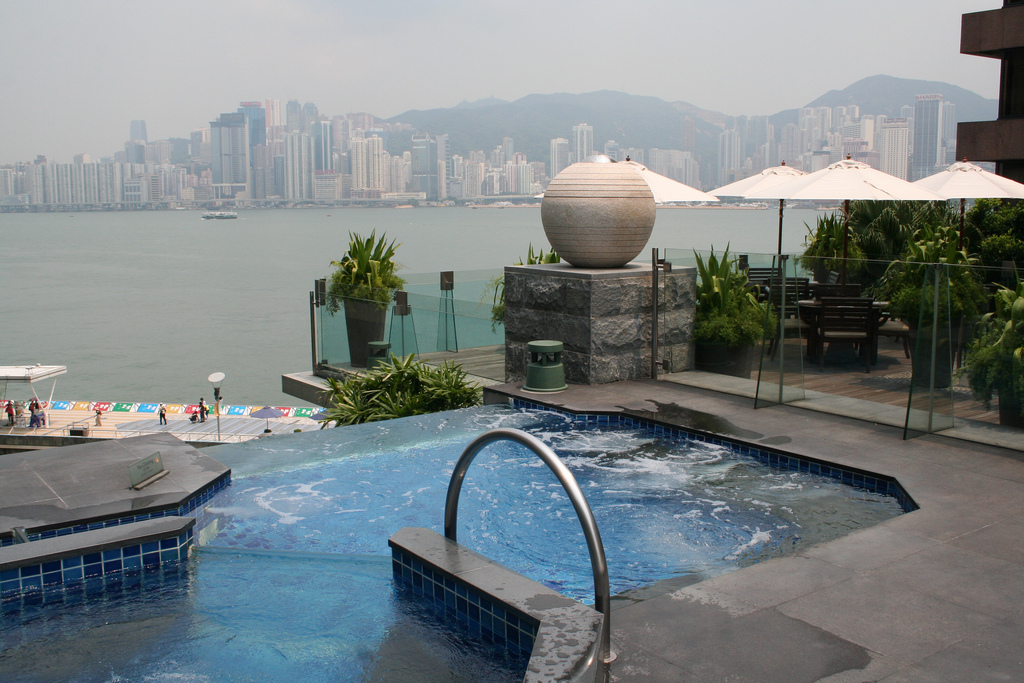 As hinted above, I’m not a beach bum type, and I can’t really relax… except for when I’m in Bali. The InterContinental is by far my favorite resort, and Bali is probably my favorite spot, so together it’s a nice combination.

First of all, the hotel itself is beautiful, with the pools really well laid out to avoid too much “traffic” in any area of the resort. Also, as is always the case in Bali, the service is overly friendly and very polished. I’ll let the pictures do the talking for why I love the resort. 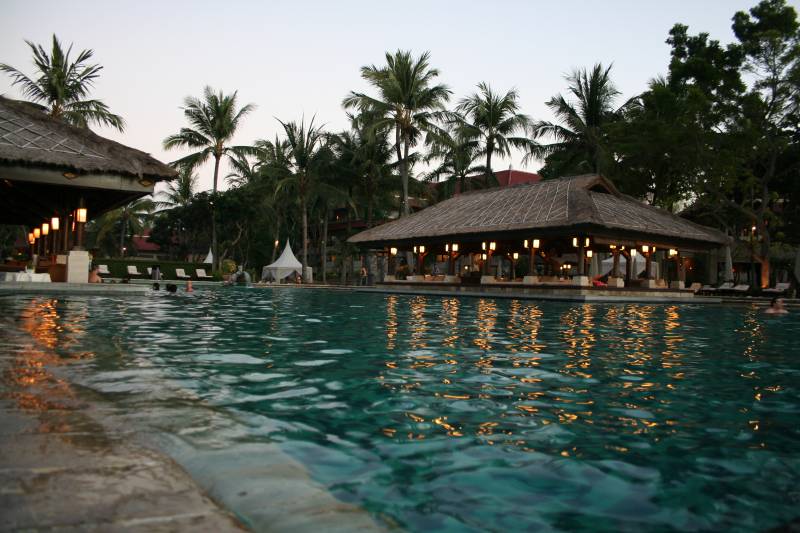 But this hotel also has, by far, the best Club InterContinental I’ve experienced. When you book a Club InterContinental rate, an airport transfer in a Jaguar is included. They used to also include a welcome service whereby they meet you on the jet bridge of the aircraft and escort you through immigration, but for “security” reasons they apparently discontinued that. What makes this club different is that it’s not just the typical club lounge – it’s a 24/7 restaurant and relaxation zone. I don’t know of any club that’s staffed 24 hours a day, let alone has as expansive of a menu as this place. 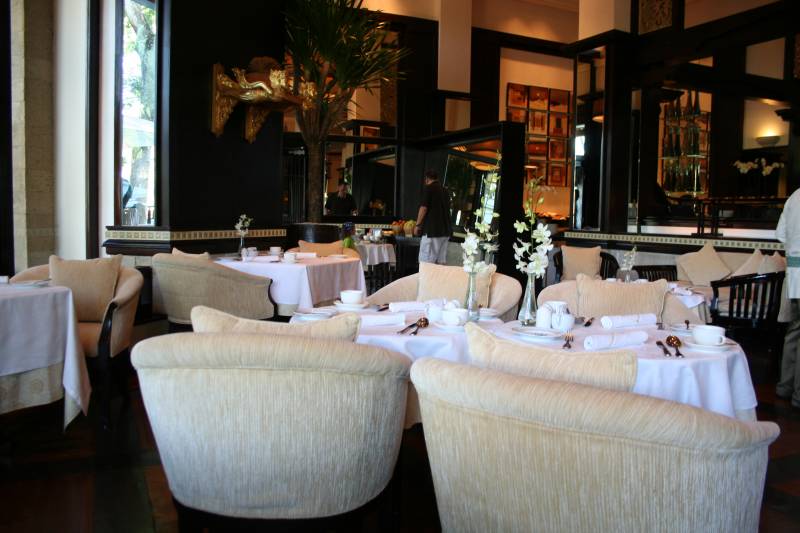 In addition to breakfast, afternoon tea, and evening cocktails, there’s a menu with about a dozen items available at any time of day, which are basically appetizer portions of what’s being served in the restaurant. As a club guest you can have breakfast in one of the restaurants, in the club lounge, or in your room, all included. Last time I stayed at the InterContinental, I didn’t spend a dime on food. It’s the service that sets this place apart, though. The employees couldn’t be more polished, friendly, and professional. Their attitudes are contagious.

Bangkok is no doubt the luxury hotel bargain capital of the world. So the last time I was in Bangkok, it seemed like a no brainer to stay at The Peninsula, given that it was under $200USD/night including breakfast. If you want to try out a Peninsula Hotel without breaking the bank, Bangkok is the city for you. It goes without saying that the service, offerings, and décor were flawless. I even recall us arriving at the hotel before the stated check-in time and our room wasn’t quite ready, so they directed us to the lobby lounge for drinks/afternoon tea and picked up the tab. 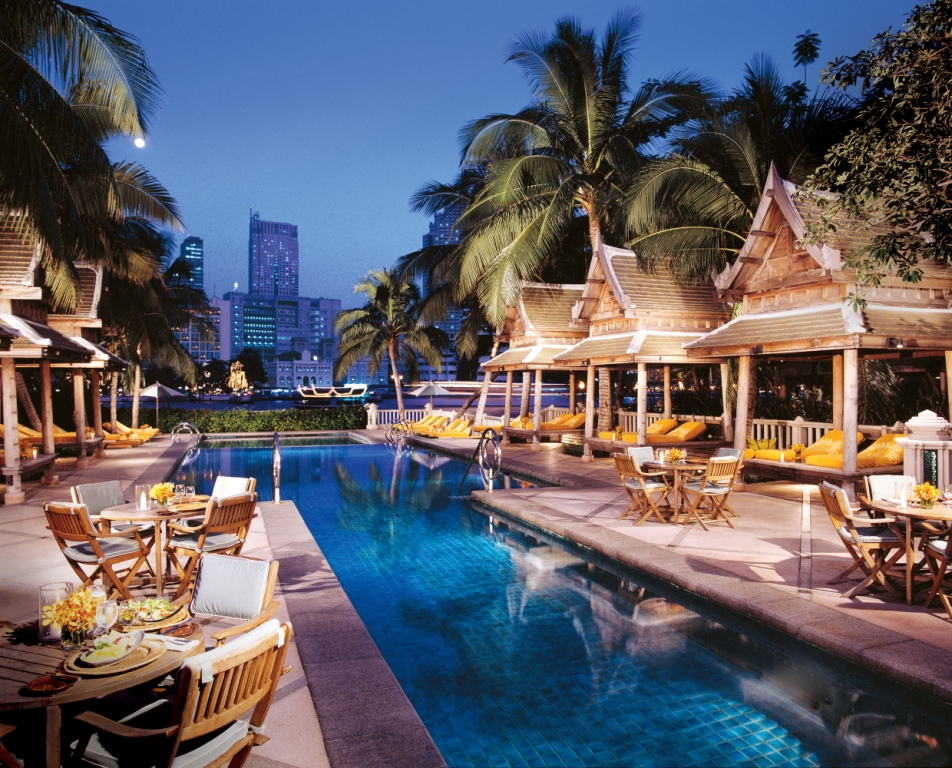 I’m a sucker for modern hotels, which would explain my general obsession with Park Hyatt hotels. I haven’t stayed at too many yet, since I just recently started staying at Hyatt hotels, but my recent stay at the Park Hyatt Seoul was phenomenal.

First, the service was top notch, or maybe at times borderline freaky. It’s a bit weird when you take the elevator to the lobby (which is on the top floor, by the way), and are immediately referred to by name by someone you’ve never met.

Equally impressive, though, is how modern the hotel is. The doors on each floor blend into the walls, giving the appearance of them being “hidden.” The rooms are modern yet functional (something that isn’t the case often enough). The indoor pool on the top floor also offers amazing views of the city and the lobby (yes, the people having cocktails in the lobby lounge can watch you do your cannonballs in the pool). 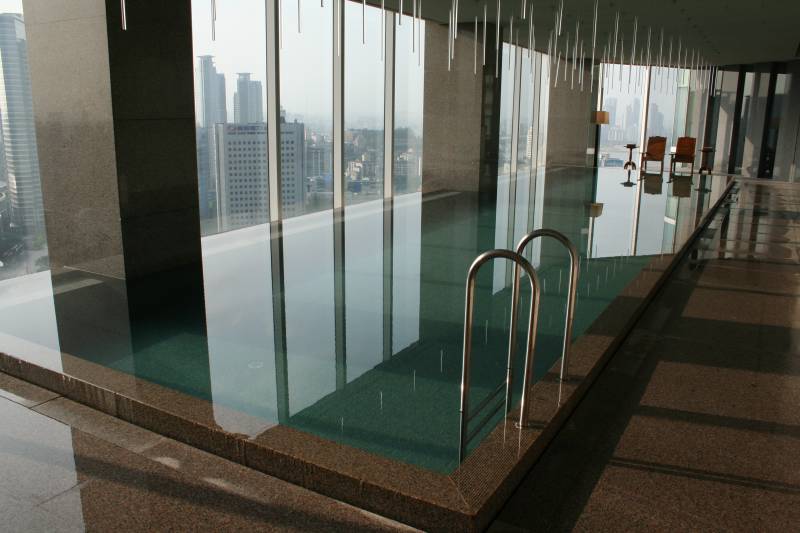 I could go on and on, but those are just a few of my favorites. Ultimately I have dozens of hotels I absolutely love. Oftentimes it’s not the hotel as such, but the people. When I come back from a vacation to the other side of the globe, it’s rarely the sights I remember, but instead my interactions with the locals. The same is true for hotels.