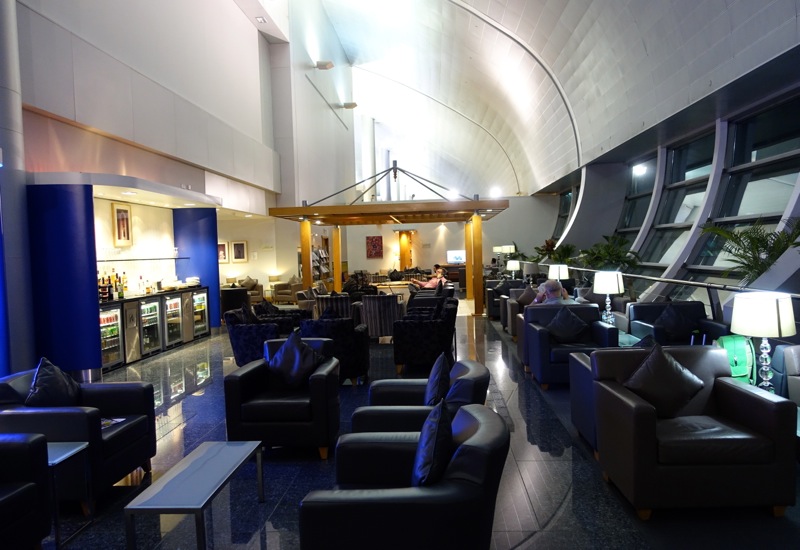 This review of the British Airways Galleries Lounge in Dubai is part of a round the world trip report including first class and business class flights, luxury hotel stays in London and Asia, and restaurant reviews.

As we were departing Dubai in Cathay Pacific Business Class, we had access to the British Airways Galleries Lounge in Terminal 1.

The British Airways Galleries Lounge in Dubai Airport is located in Terminal 1, airside, after security, near Gate C26. It's open from 6-10am and 2:30pm to 2am. Be sure to double check your departure gate before leaving the lounge. One of the few times I didn't do that, and did I ever regret it–our original gate was at the opposite end of the concourse, but once I got there, I found that it had been changed to a gate close to the British Airways Galleries Lounge, so my son and I had to sprint back in the other direction. 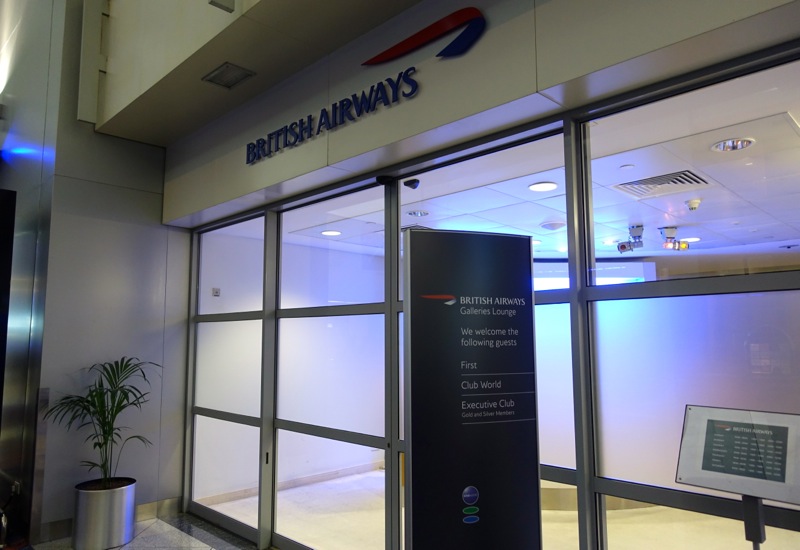 This is a very bare bones business lounge, so low expectations are recommended. There's regular armchair style seating, free WiFi which was frustratingly slow, and a basic buffet selection. I'm not sure why BA.com lists a spa as an amenity here, since not only did I not see one, there aren't even showers in the lounge. At least the women's bathroom was clean, if basic: 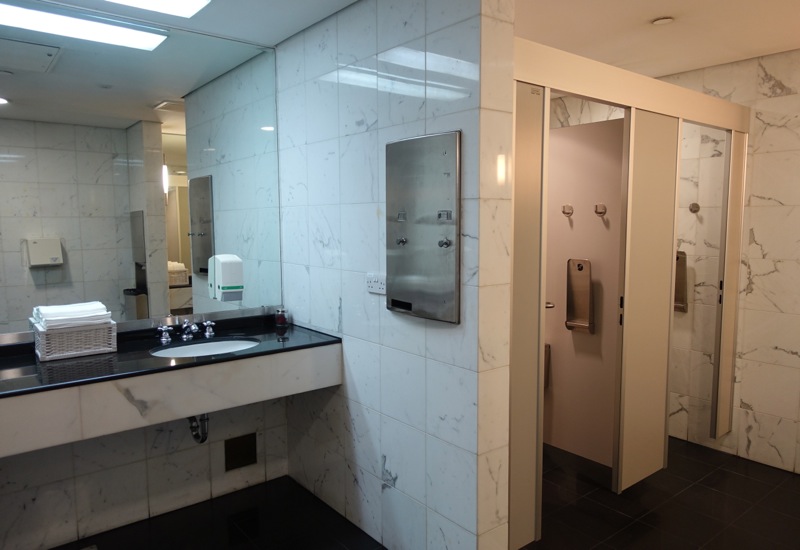 If this had been a U.S. domestic lounge such as a United Club or American Admirals Club, the British Airways Galleries Lounge in Dubai would be considered great, since it had some basic but quite fresh sandwiches such as cheese and tomato, hard boiled egg and tomato, and pita sandwiches: 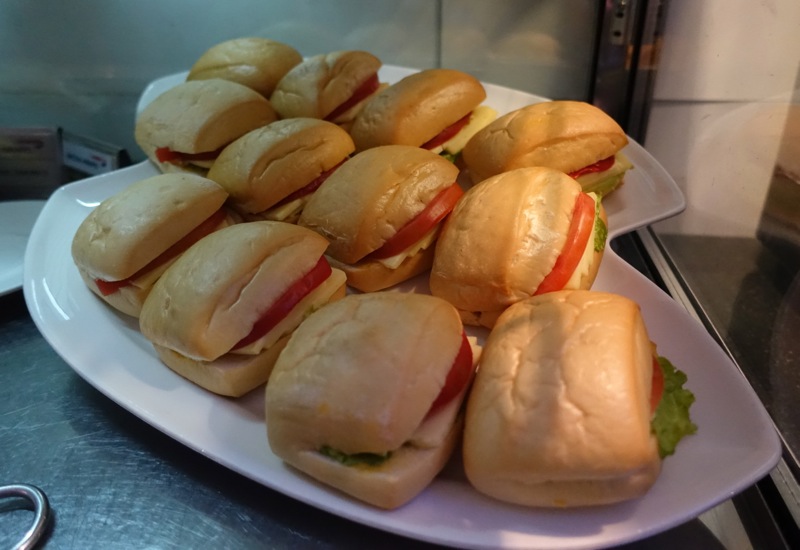 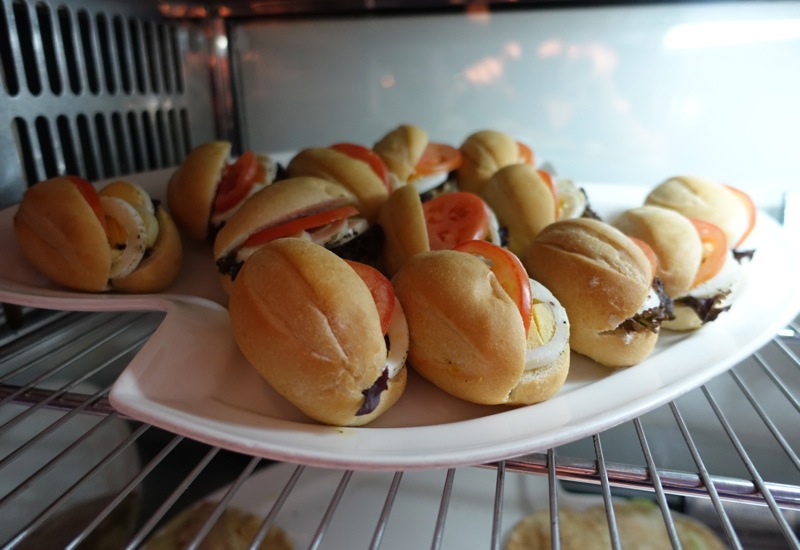 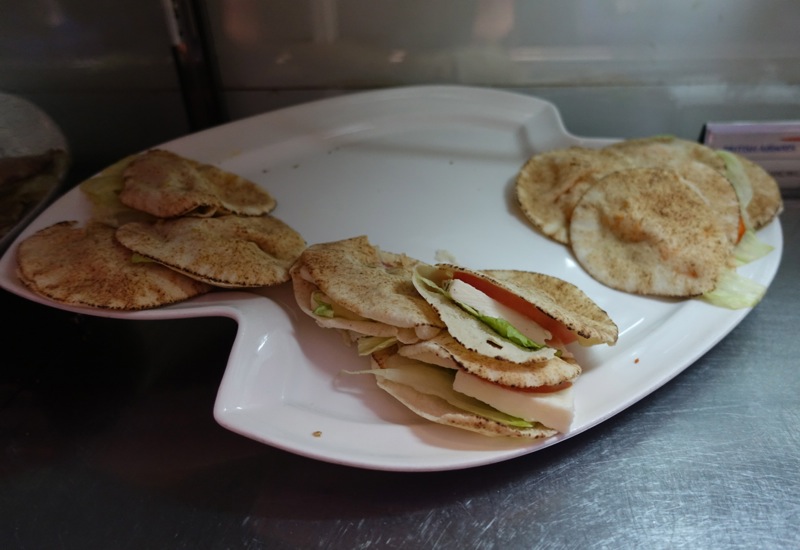 There were also a few hot appetizers, including some kind of vegetarian patty and some savory puff pastry items that seemed to have been sitting out too long: 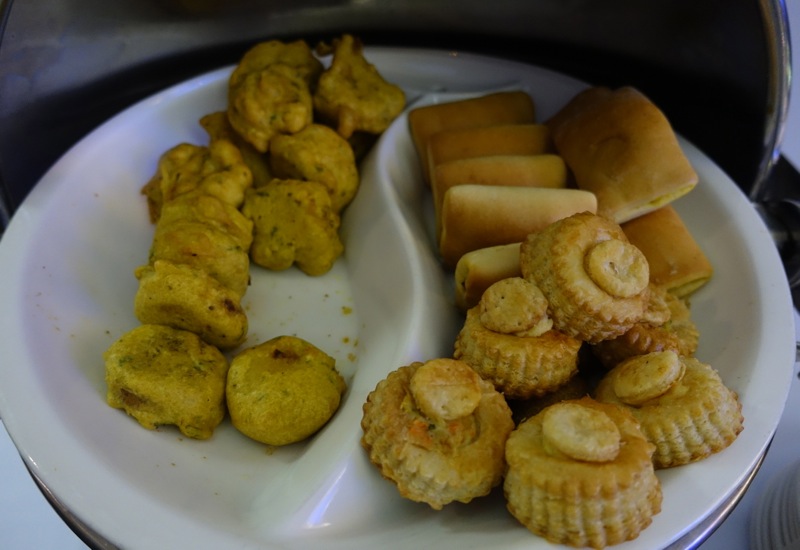 There was also a rather greasy mystery soup on offer: 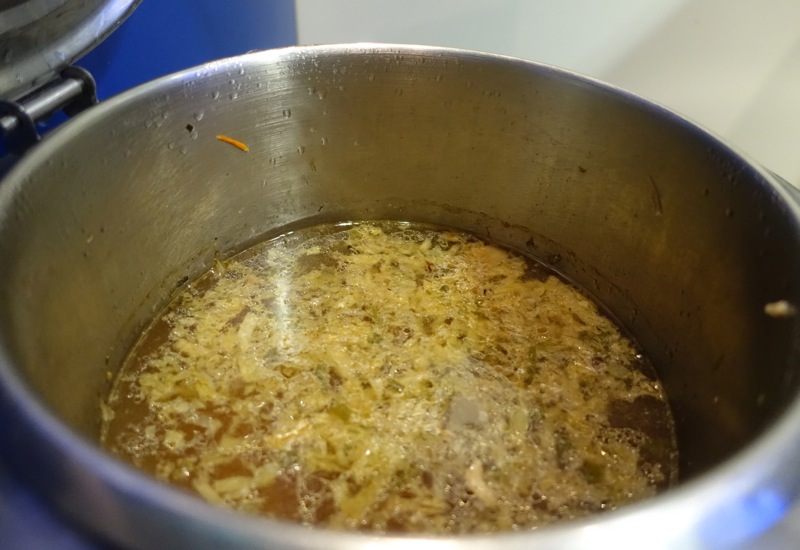 Drinks were probably the highlight, with several wines and a decent selection of liquor, as well as soft drinks and a few white wines in the chilled case: 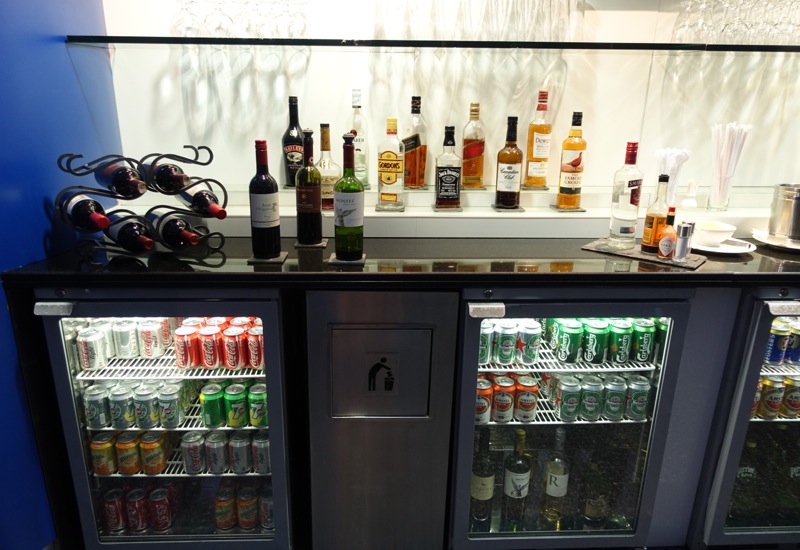 Although from concentrate and not of course fresh squeezed, there was a better selection of juice than you normally see, including mango juice and pineapple juice: 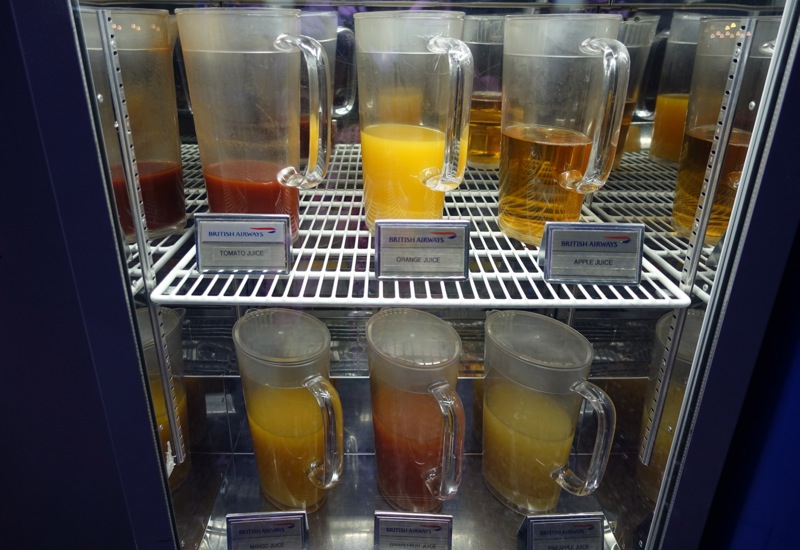 And of course a coffee machine with automated espresso drinks and a selection of Dilmah teas. I'm not a fan of Dilmah teas, so I used the hot water for some of my own Mighty Leaf tea I'd brought with me. 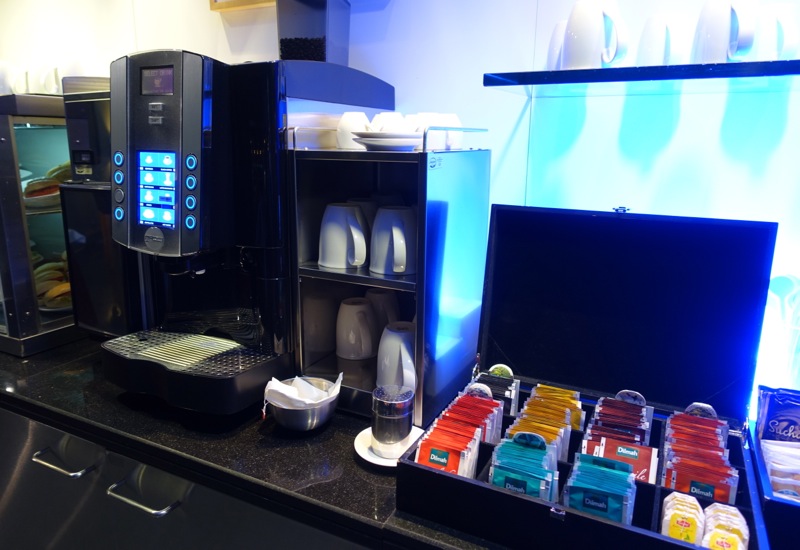 My son was hungry, but since there wasn't much that he cared for in this lounge–no yogurt, for example, and no fresh fruit when we were there. He ate some of one of the sandwiches, and then I rummaged in our bags to find an apple I'd saved, as well as some dry cereal I'd brought with us, and he had that with some milk from the chilled case. He enjoyed having it while sitting on one of the bar stools at the curved bar: 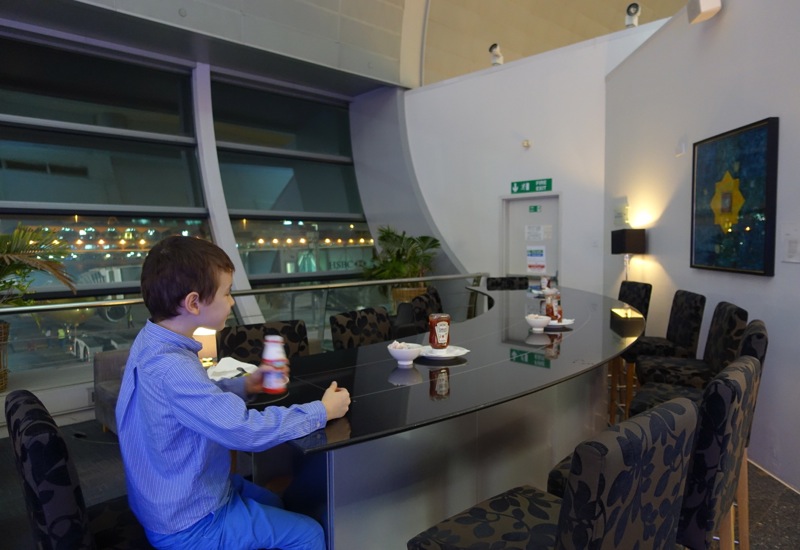 In retrospect, given that our Cathay Pacific flight sat on the tarmac for awhile, I should have eaten something in the lounge, but I was too busy battling the slow Internet and trying to get some work done.

Overall, a disappointing international business class lounge, especially the slow Internet. It's a small British Airways Galleries Lounge, which makes sense for British Airways since Dubai isn't a hub or as major a destination as New York is, but I still would have expected a bit better than this small lounge with no showers and limited food options, particularly compared to what is on offer in the Emirates Business Class Lounge. Had we not been concerned by the heavy traffic, I would have chosen to stay a bit longer at the Park Hyatt Dubai, with better internet, and bypass the lounge altogether.

If you've visited the British Airways Galleries Lounge in Dubai Airport, were you also underwhelmed?