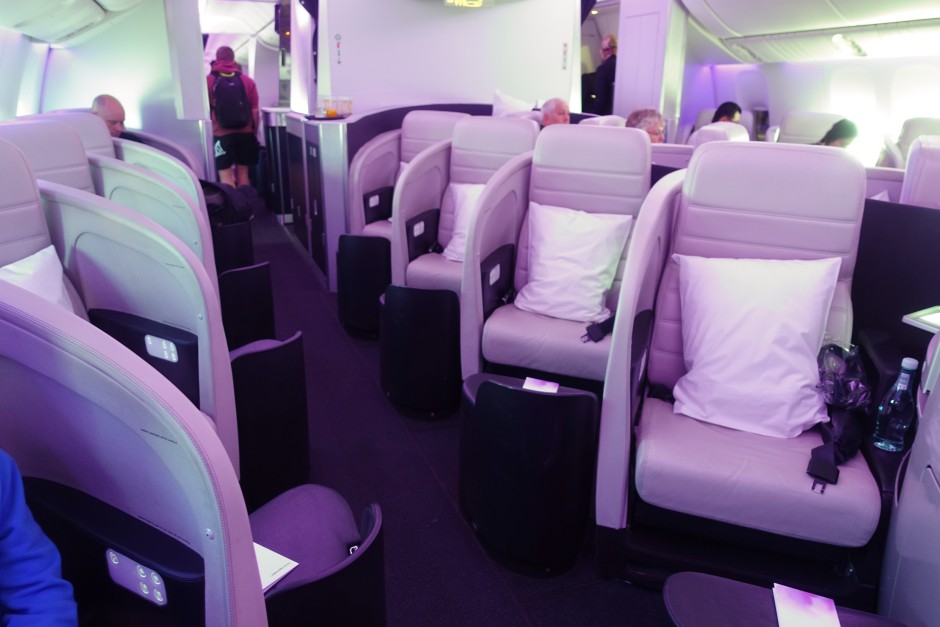 This Air New Zealand 777-200 Business Premier Review is from our 2017 flight from Auckland to Nadi, Fiji. You can also see my husband's underwhelming Air New Zealand Business Class Review, and all our posts tagged New Zealand.

Air New Zealand 777-200 Business Premier Cabin and Seat Selection
Air New Zealand's 777-200 aircraft have 26 flat bed seats arranged in a 1-2-1 configuration across 7 rows, although row 1 has just 2 center seats, 1B and 1J. If you're traveling solo, you'll likely want one of the window seats, although I'd suggest avoiding row 7, since it's by the galley and restrooms that separate business class from premium economy.
Keep in mind that all seats face towards the aisle, which is an unusual design choice as business class flat bed seats go. While that could make it easier to sleep, since your head isn't right by the aisle, it makes it more awkward to look out the window, and on a full flight means you're looking towards other passengers. Fortunately the business class cabin on our flight was less than half full, so there were a number of empty seats, and I was even able to use one of them for my lunch after reclining my own seat into a bed.
I regretted the Air New Zealand seating style, however, when a fellow passenger across the aisle started making unsolicited recommendations on how I could better use my IFE screen. 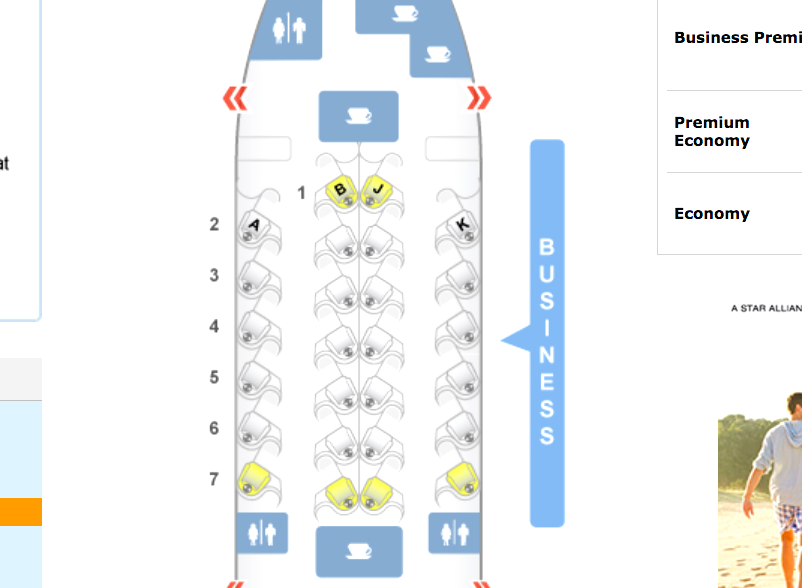 The Air New Zealand Business Premier Seat is 22 inches wide in white leather, with an ottoman that can be used as a companion seat for tete a tete dining. 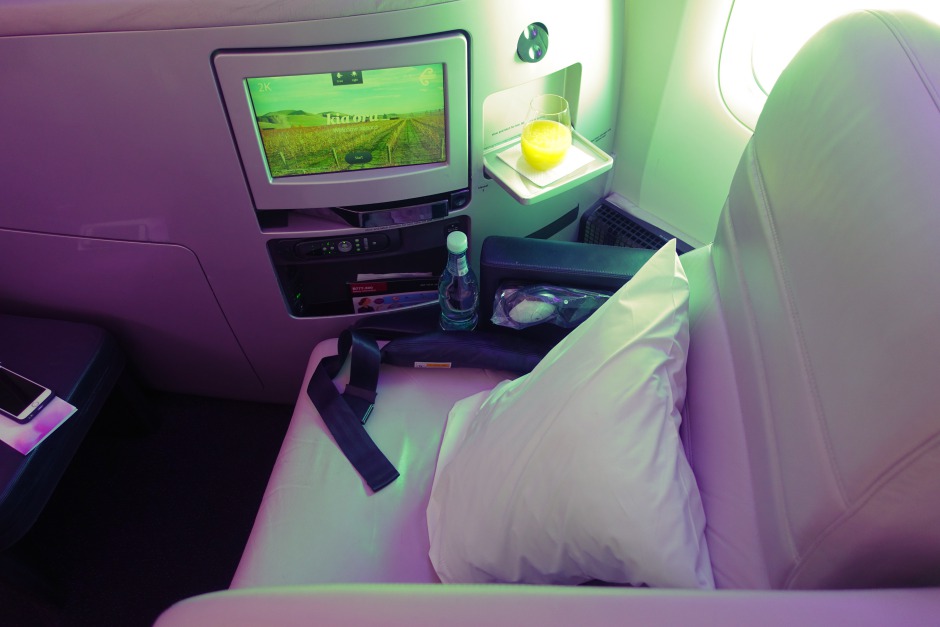 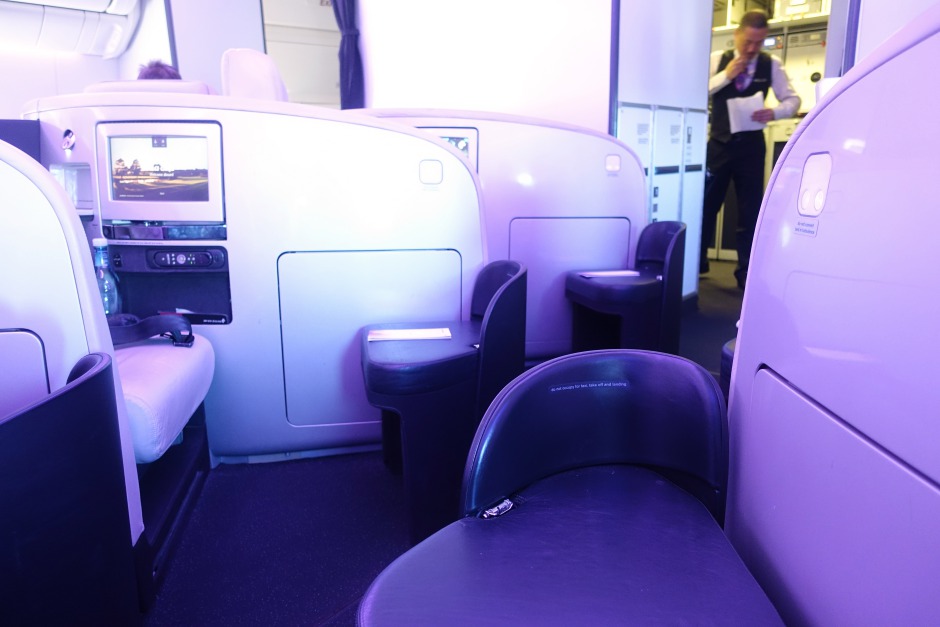 The seat controls enable you to adjust the seat and pop up your dining table: 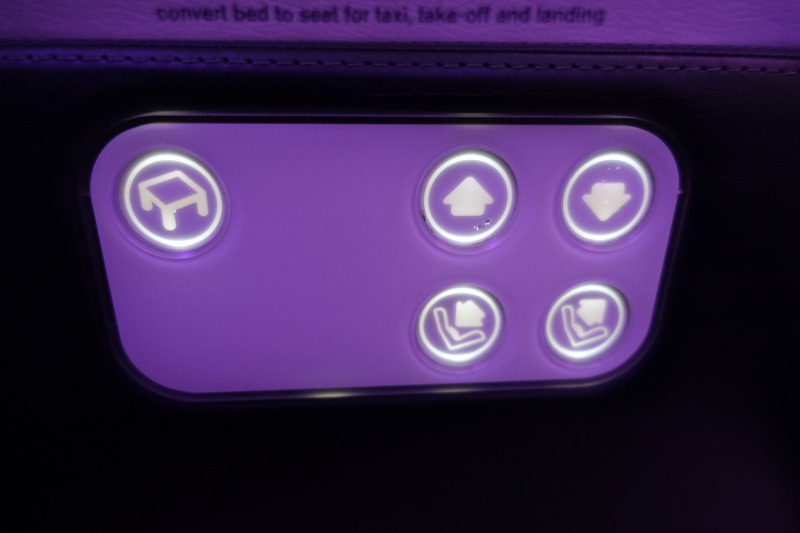 Here's a video of the Air New Zealand 777-200 Business Premier Cabin and Seat:

Prior to take-off we were offered a pre-flight drink. I chose orange juice, as I remembered how good it was last year in our Air New Zealand Premium Economy flight, and wasn't disappointed–it's still the best fresh squeezed orange juice I've had as a pre-flight drink on any flight, first class or business class. 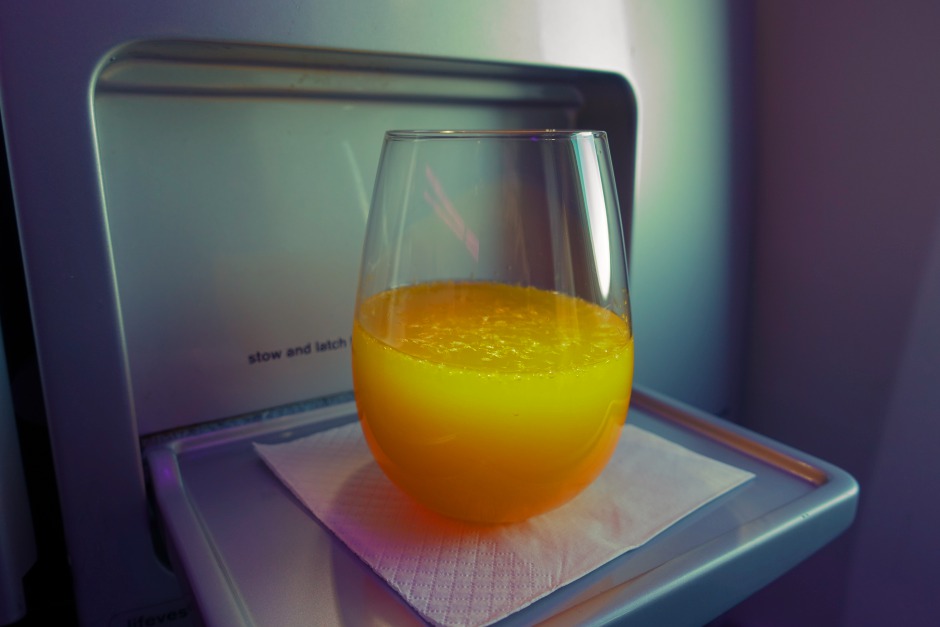 Lunch was served on our flight from Auckland to Nadi. Here's the lunch menu for our flight, along with the wine list and drinks: 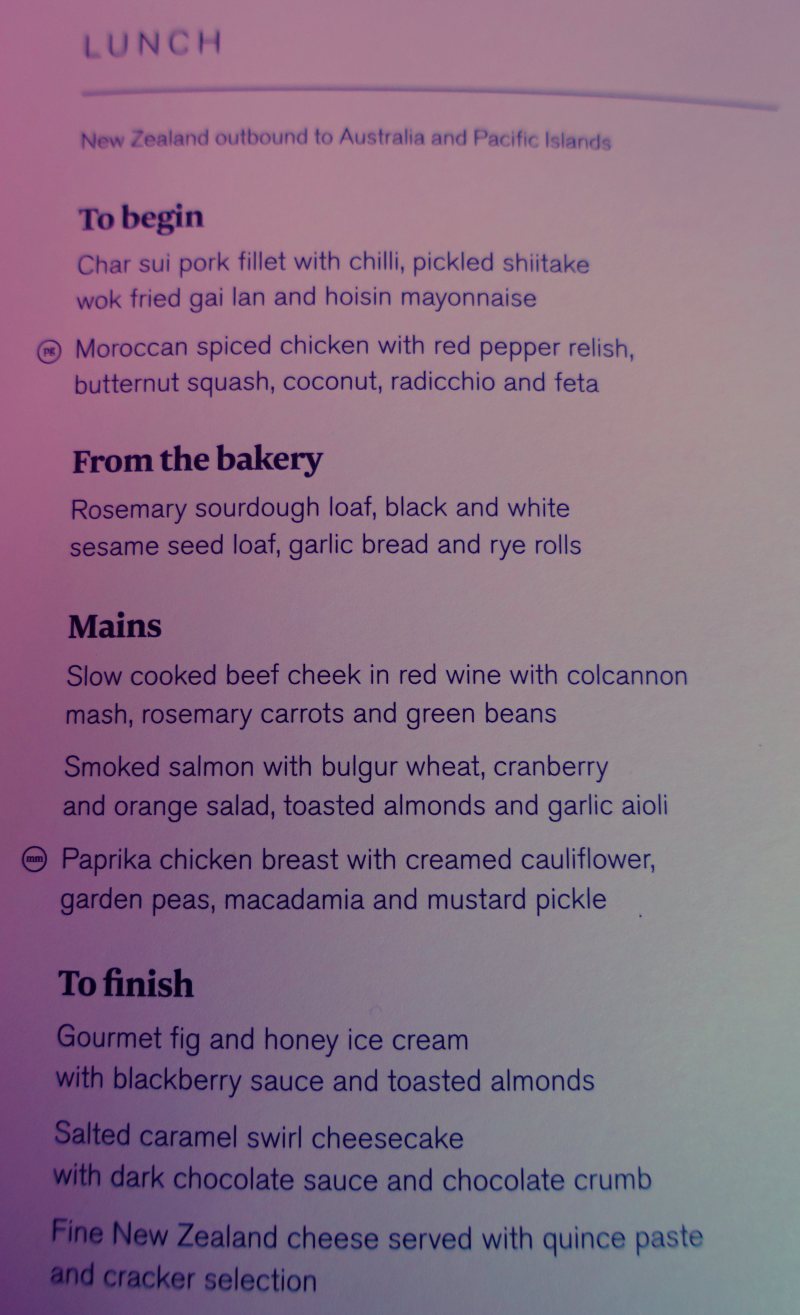 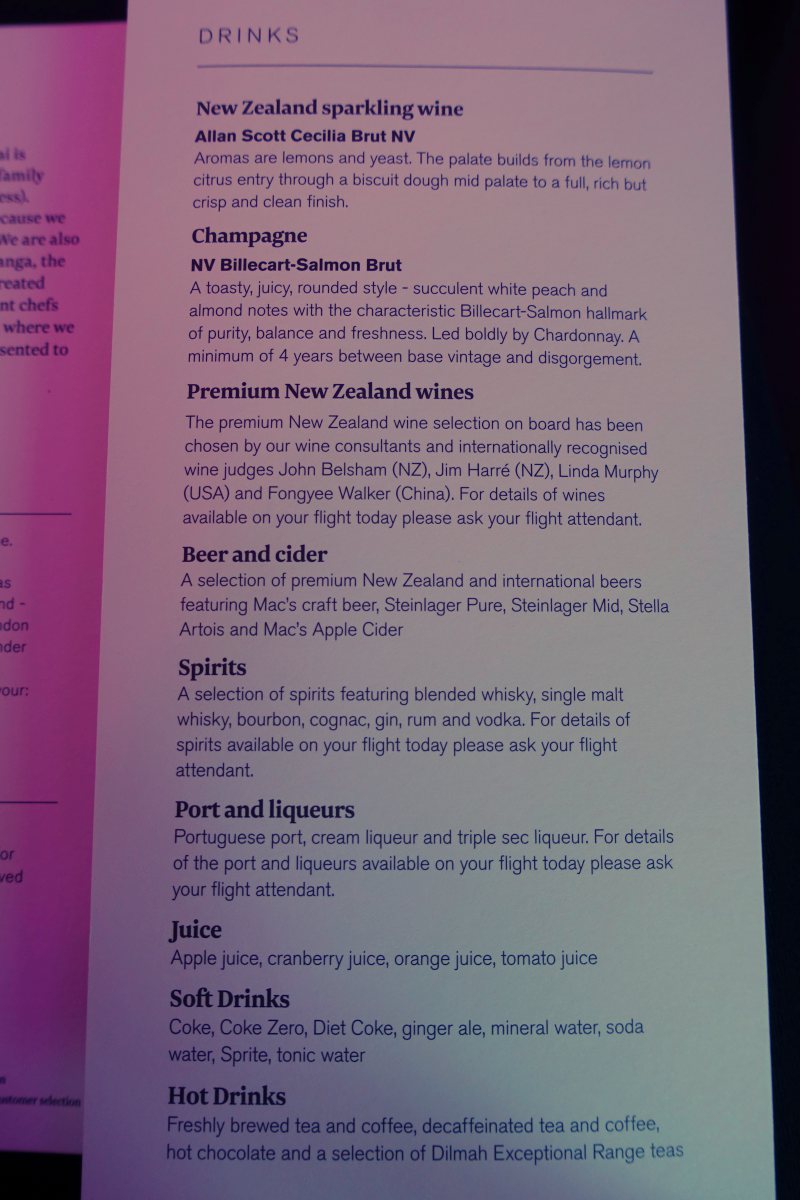 Soon after take-off we were given a hot towel: 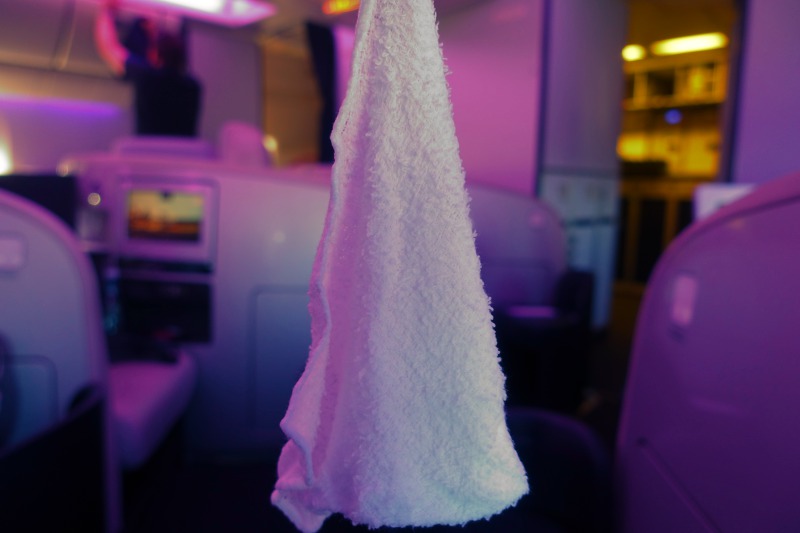 Pre-meal drinks were served, but I just opted for hot tea.

I chose the Moroccan Spiced Chicken as my appetizer, prepared with butternut squash and coconut, and it was fantastic. This was a chef's selection, so I recommend sticking to those. 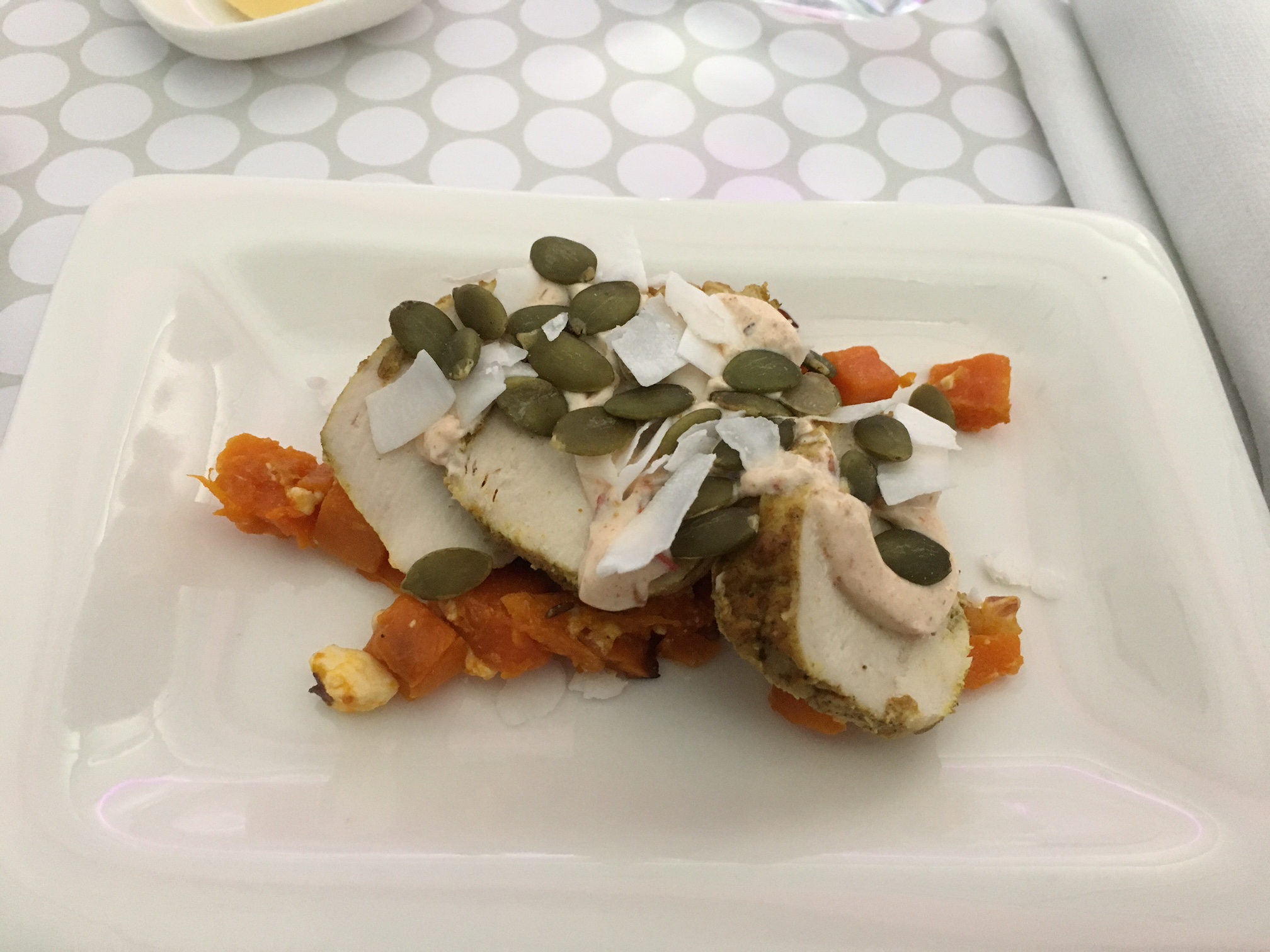 For my main I chose the Slow Cooked Beef Cheeks entree, but it was nothing special, and quite mediocre. 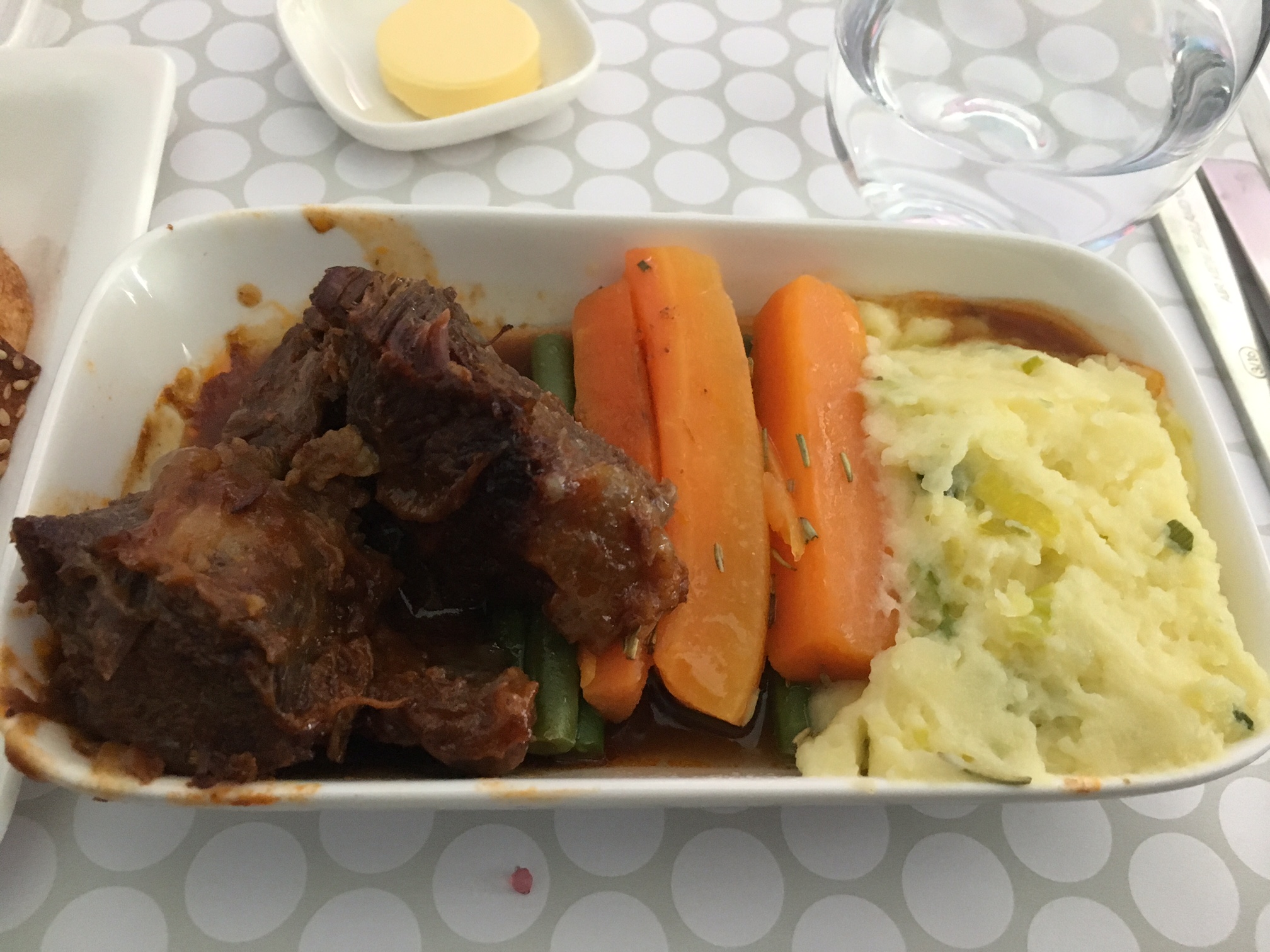 The dessert, which sounded good on paper, a Salted Caramel Cheesecake, was plain bad–something you might get at a cheap cafeteria. I took one bite and asked for the ice cream instead. The flight attendant didn't look too pleased (perhaps he was counting on eating ice cream for his dessert?) but brought it to me. Weirdly, even though by that point I was sitting across from my son for my meal, the flight attendant insisted on putting the cheesecake and ice cream on the table I'd previously been sitting at, so I had to get up both times to bring it to where I'd moved to. Strange. 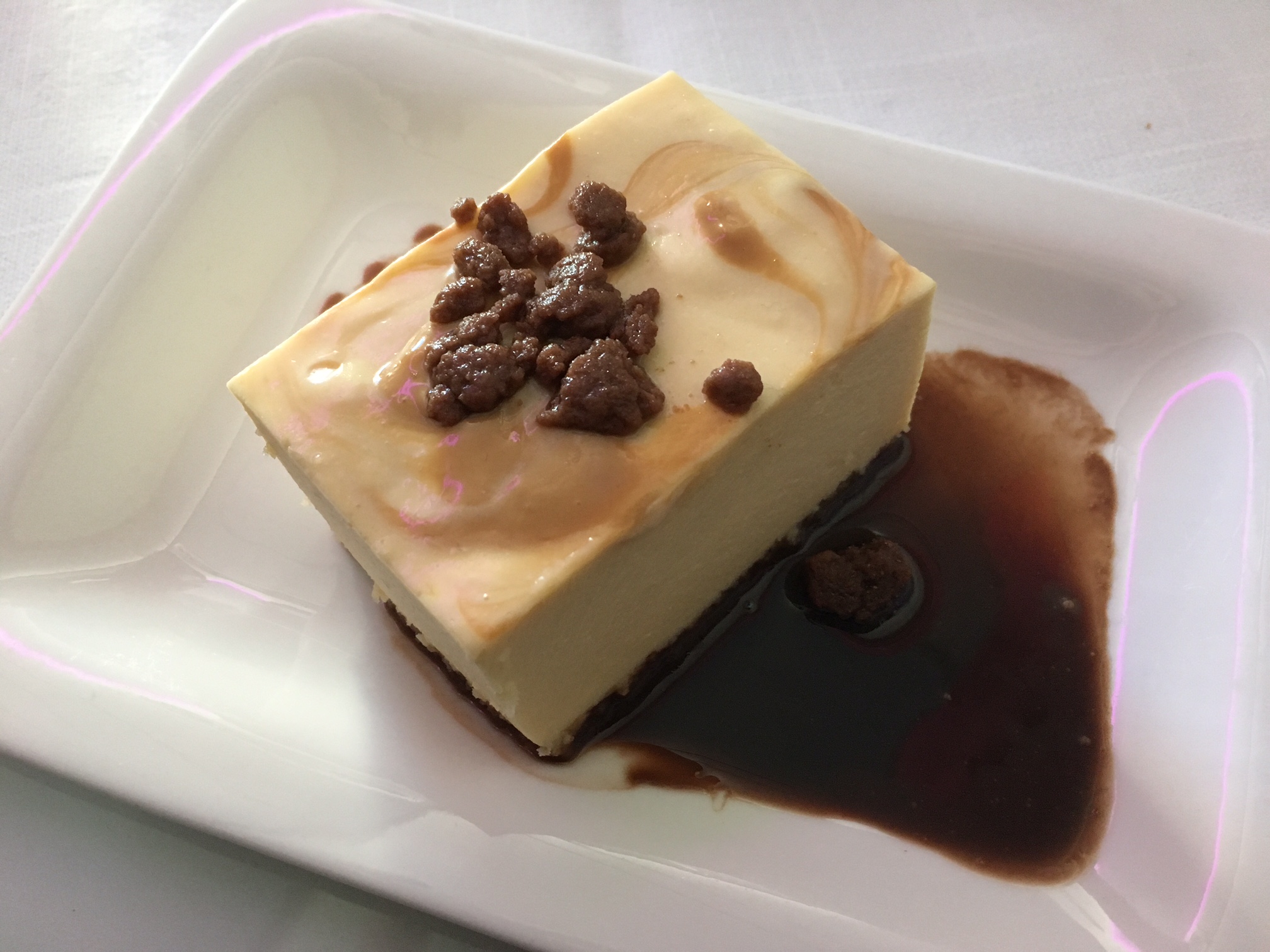 The ice cream was definitely the better dessert: 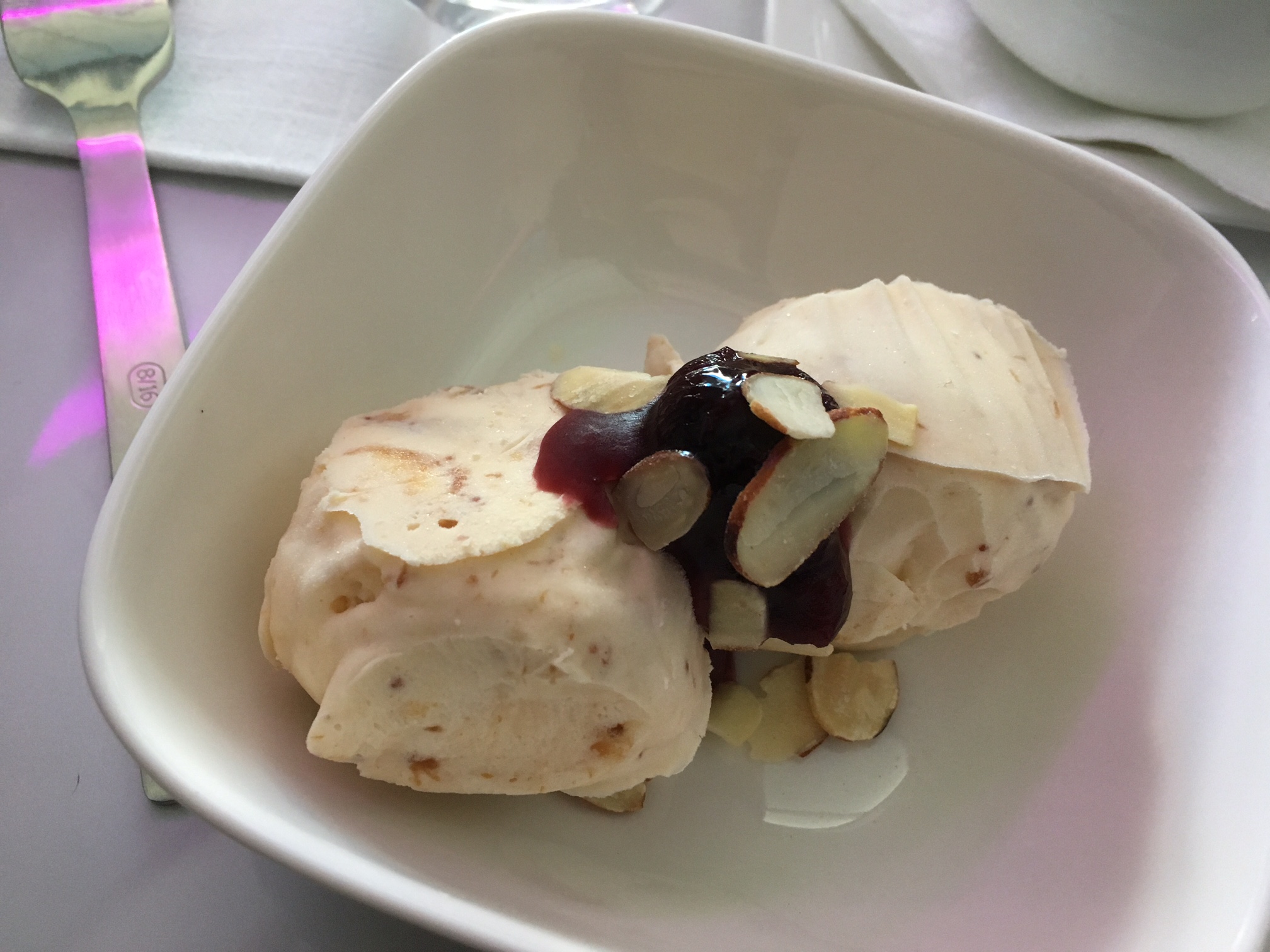 The tall seat back flips over to join with the ottoman to form a 6 foot 7 inch flat bed. On the 777-200 there's a duvet and pillow, but not a memory foam mattress as there apparently is on the 787-9 Dreamliner. A flat bed is a must in any business class product these days, and I do give points for the length of the bed, which is definitely longer than Singapore Airlines Business Class. It was way too firm for my taste though, so on any long flight I'd have wanted to use a Therm-a-rest mattress pad. 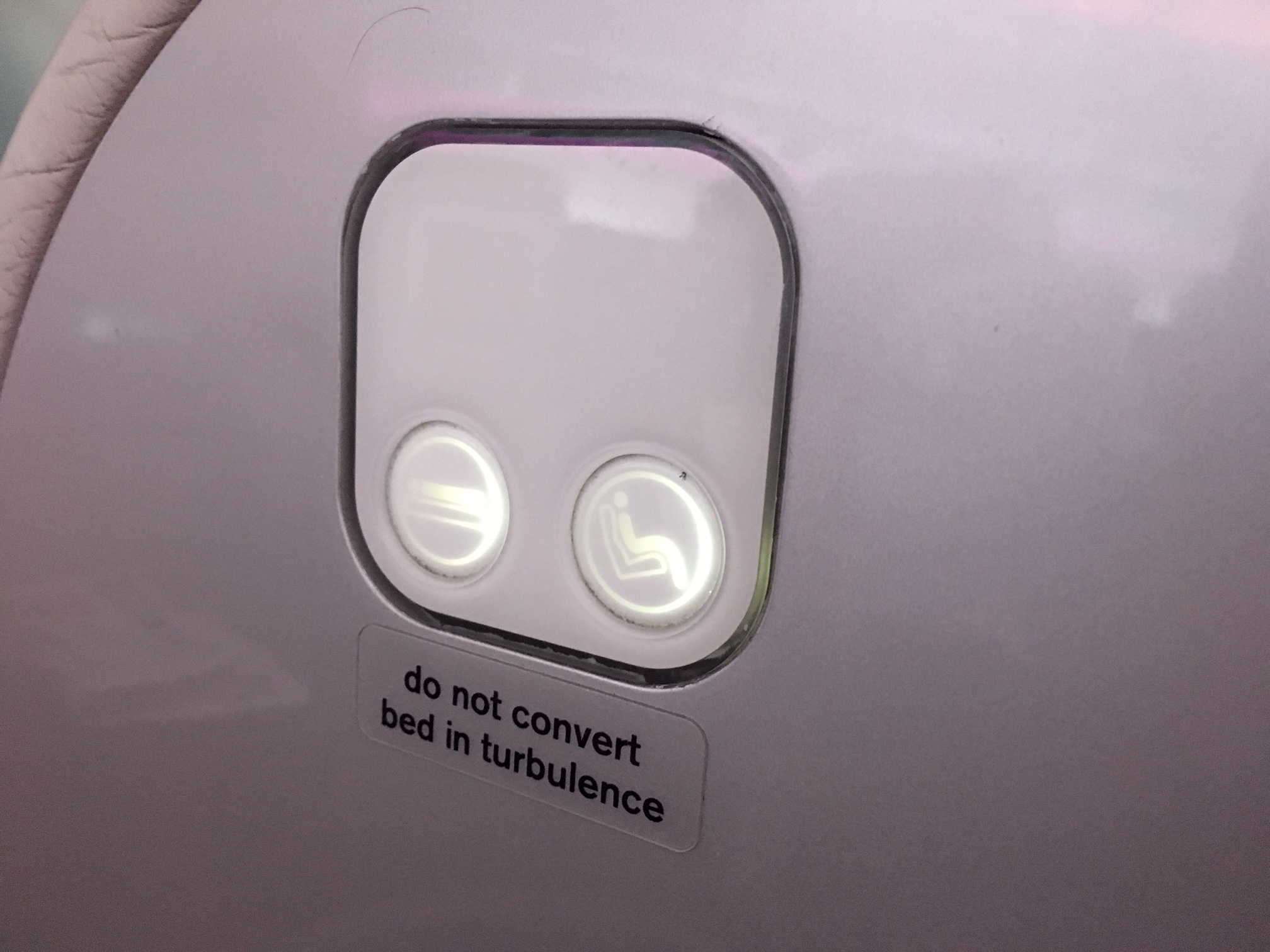 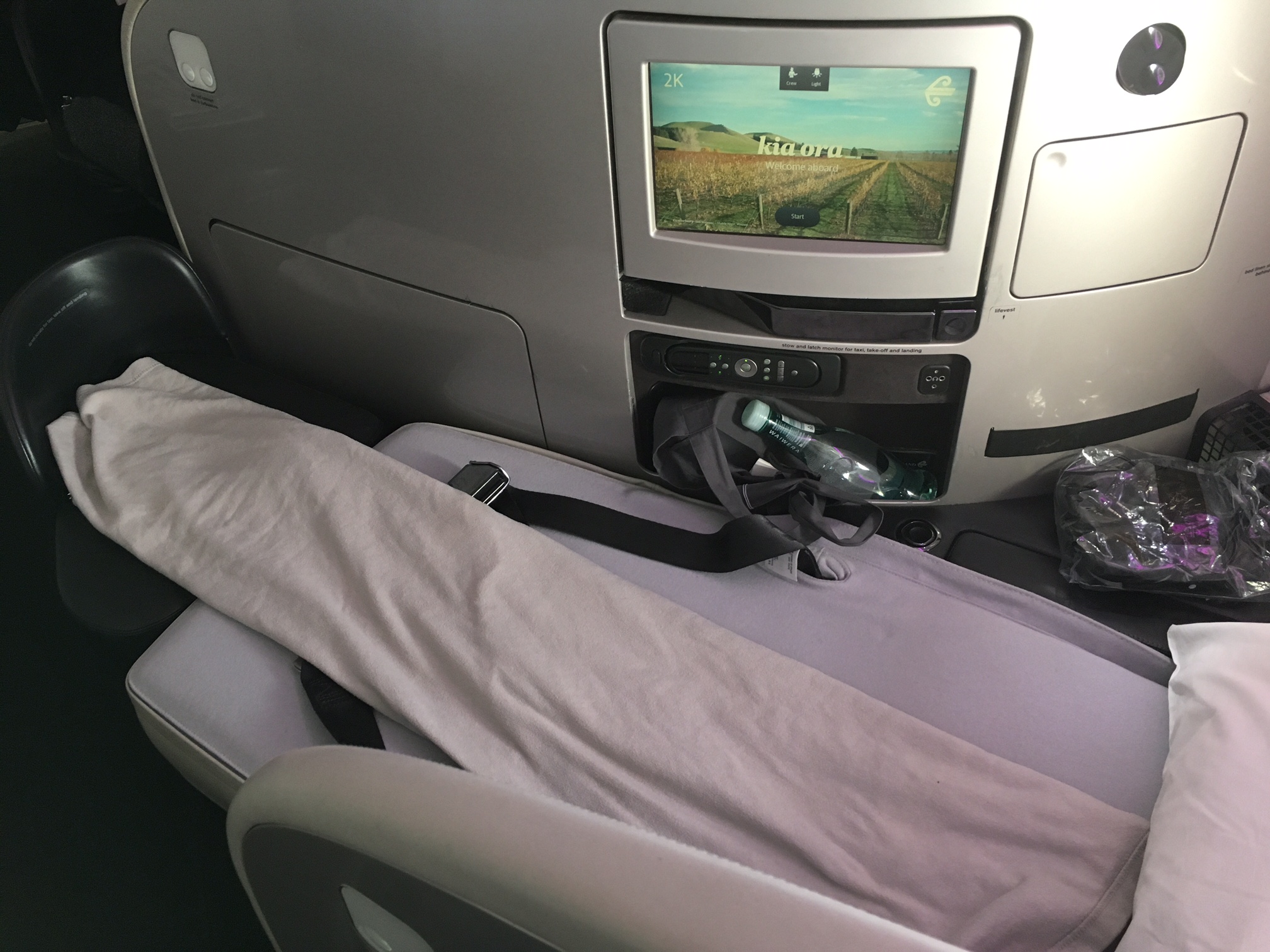 While I was glad to try Air New Zealand Business Premier on our relatively short flight from Auckland to Nadi, I found the seat in its upright position incredibly uncomfortable. It's great that it turns into a flat bed, but that's really the only way I'd want to fly in it, and ideally with a Therm-a-rest mattress pad to make it more comfortable. The cabin looks very modern, but that doesn't make up for uncomfortable seats. I do like that there's a grill set up to prevent passengers from losing their phones and small electronics in the space between the seat and window.

Service was ok, apart from the weird incident of putting my desserts at my old seat and not where I was actually sitting, although honestly the flight attendants on our flight the prior year in Premium Economy were friendlier. In terms of dining, Air New Zealand serves the best fresh squeezed orange juice as a pre-flight beverage of any airline (first class and business class) that I've flown, so full points for that. The Moroccan spiced chicken appetizer was also delicious, but it was the highlight of the meal. The main course was mediocre, and the cheesecake was downright bad. I don't usually take just one bite of dessert in business class or first class, but I was so disappointed I asked for the ice cream.

If you've flown Air New Zealand Business Class, what was your experience?