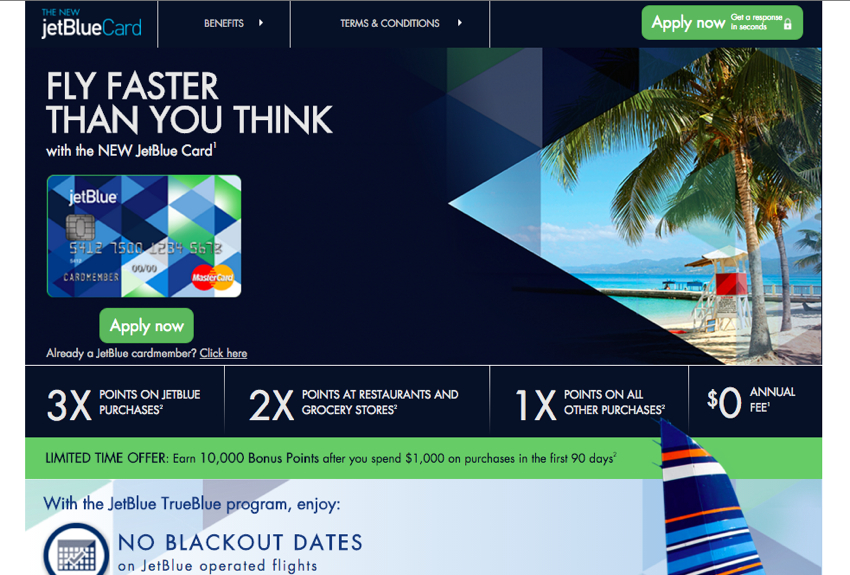 New JetBlue credit cards have been announced by JetBlue and BarclayCard, as well as a conversion card for existing JetBlue AMEX cardholders. Here are the details of the cards, followed by a FAQ with my analysis.

For me at least, the biggest news is the JetBlue Card, which has no annual fee and also no foreign transaction fee. That's a great combination, as far as I'm concerned, and makes the card a keeper, if I get it.

Which JetBlue Card is Best?

Naturally which JetBlue card is best depends on how much you fly JetBlue, how you value JetBlue TrueBlue points, and your spend habits and travel preferences. If you book paid JetBlue tickets a lot, particularly JetBlue Mint Business Class, you'll likely want either the JetBlue Plus Card or the JetBlue Business Card, since these award 6 JetBlue points per dollar of JetBlue spend. The only difference between the two cards is that the business card replaces the 2X grocery store bonus with a 2X office supply store bonus. But as I'll discuss below, you can do better than 2X at restaurants, grocery stores and office supply stores with other cards, so that difference if you have other cards is a moot point.

The other nice benefits worth highlighting with the JetBlue Plus and JetBlue Business card are the 10% redemption bonus (akin to the Citi AAdvantage Platinum Select card, although that one is capped at 10,000 AAdvantage miles per year, and there's no cap with the JetBlue cards), the 5000 bonus points each year on your card anniversary (worth about $65) and free first checked bag for you and 3 companions, if you purchased your JetBlue flight with your card.

If you have similar travel patterns to my family and occasionally travel JetBlue, at most a couple times a year, then the no annual fee JetBlue card is your best bet. You can keep the card forever, and use it just for purchases where it makes sense. If you don't have the AMEX Premier Rewards Gold Card or the AMEX Business Rewards Gold card, which offer 3X on all airline spend if booked directly with the airline, you could use the JetBlue's 3X on all JetBlue purchases.

My spend, if I got the JetBlue Card, would be quite narrow: 2X on grocery spend when abroad, since the card has no foreign transaction fee. And yes, I do like to browse grocery stores in foreign cities when I have time, to pick up some unique products either as makings for a picnic or to bring home as souvenirs or gifts. Currently I do have the AMEX Business Rewards Gold card, and will likely keep the card since AMEX has made signup bonuses once in a lifetime and the 3X on all airfare bonus ends up paying for the card's $175 annual fee.

Which Transferable Points Transfer to JetBlue?

Does JetBlue Have Any Partners I Can Book Using TrueBlue Points?

Right now the only JetBlue partner you can book is Hawaiian Airlines, which I wouldn't consider aspirational, much as I hate to say it, being from Hawaii. You can earn TrueBlue points on JetBlue partners such as Emirates, Singapore Airlines and South African Airways, but so far you can't redeem TrueBlue points on these partners. I asked about this and was told that JetBlue is working on making points redemptions on these airlines possible.

Keep in mind however that TrueBlue points are tied to the cost of a ticket, so most likely it will continue to be a better deal to earn transferable points such as Ultimate Rewards or AMEX Membership Rewards points and transfer those to Singapore KrisFlyer to redeem for awards, particularly if your goal is Singapore Suites on the A380.

How Much is a JetBlue TrueBlue Point Worth? How Much is the 30K Bonus Worth?

Since TrueBlue point redemption is tied to the dollar cost of the ticket rather than being region based or distance based, you can't get amazing value from the points the way you can from other airline miles. That's the flip side of having a program where you can use points for any ticket: you can, but a ton of points are required, compared to other programs.

Now consider that on certain days you could redeem 32,500 AAdvantage miles for a saver award in American Airlines First Class on the A321 for JFK-LAX, and that you can earn 50,000 AAdvantage miles from a single Citi AAdvantage card signup (see Best Travel Credit Cards). Yes, that amount will go up to 50K miles effective March 22, 2016 after the 2016 AAdvantage Award Chart Devaluation. But that's still the amount a single card signup bonus, whereas the 30K TrueBlue points from a JetBlue card aren't sufficient to cover even the cheapest possible JetBlue Mint award, and aren't even half the amount required for more expensive JetBlue Mint awards.

Which Other Cards Should I Consider?

Also keep in mind the category bonuses of the following cards when you're weighing the 2X restaurant, grocery store and office supply store bonuses:

For those who have significant spend on JetBlue, the new JetBlue Plus and JetBlue Business cards with their 6X bonus on JetBlue purchases should be very welcome. For more occasional JetBlue travelers, the JetBlue card is a great unique offering, as a no annual fee card that also has no foreign transaction fees. While I have my hands full applying for Chase co-branded cards before 5/24 goesdt into effect in April (see Which Chase Credit Cards to Apply For Before 5/24 Rule Takes Effect?) and also the 35K SPG Business card, I'd definitely consider the JetBlue card in the future. And while I don't focus on collecting TrueBlue points due to the limited value of each point, that's no reflection on the airline itself, which I enjoy flying more than the legacy carriers, due to JetBlue's usually friendlier crews.

What are your thoughts on the new JetBlue cards?

Editorial Disclosure: The editorial content on this site is not provided by the companies whose products are featured. Any opinions, analyses, reviews or evaluations provided here are those of the author's alone, and have not been reviewed, approved or otherwise endorsed by the Advertiser.