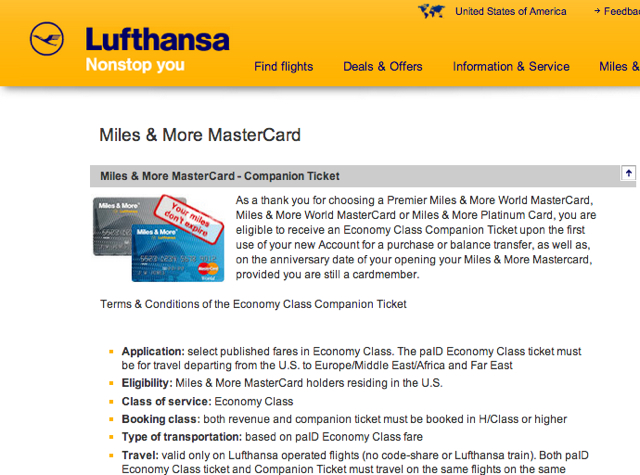 The Lufthansa Miles & More Card has a new companion ticket benefit, for both new cardholders and existing cardholders. But is it worth it? Here are the details:

Almost Never a Good Deal, Due to Required Fare Class and Paying Tax on Companion Ticket
As I suspected, this is almost never going to be a good deal, compared to outright buying two tickets in Lufthansa Economy. For example, I picked a couple of dates in March 2015 for JFK-FRA-JFK where the lowest paid fare in Lufthansa Economy was $910 per ticket, total of $1820 for two. With the Lufthansa Miles & More companion ticket, the cardholder's fare was $1087 and the companion's taxes and fees were $708, for a total of $1795. This is just $25 lower, so not what I'd call a good deal.
I then tried a couple of dates in May 2014, again JFK-FRA-JFK in Lufthansa Economy, where the lowest nonstop paid fare was $1103 per person, total of $2206. In this case, the cardholder would pay $1678 and the companion would again pay $708 for taxes and fees, for a total of $2386, so the paid fares save you $180 over using the companion ticket.

Long Haul Companion Tickets Usually Not Worth It

In general, long haul companion ticket offers are NOT worth it, for one or more of these reasons:

Verdict: I do recommend the Lufthansa Premier Miles & More Card if an enhanced bonus comes along (there used to be a 50,000 bonus offer, current bonus only 20,000 miles with first purchase, plus 15,000 miles with a balance transfer). It's good to have Lufthansa Miles & More miles if you hope to book Lufthansa First Class, Lufthansa New Business Class or SWISS Business Class in advance. Also see Best Ways to Use the Lufthansa Miles & More Award Chart.
But the new Miles & More companion ticket offer is not a real benefit, for most cardholders.
Instead of the current low bonus for the Miles & More card, I recommend the Barclays Arrival with a 40,000 Bonus, which as a cash back travel card gets you over $400 in free travel from the sign up bonus plus minimum spend. In fact, after the $3000 minimum spend, you'd have 46,000 miles (40K from the bonus + 6K from 2X on the $3000 min. spend), enough for a $460 statement credit when redeemed for travel–perfect for paying for fuel surcharges and taxes on award tickets.
Related Posts
Best Ways to Use the Lufthansa Miles & More Award Chart
Barclays Arrival: Top 10 Tips to Maximize the 40,000 Bonus
British Airways Companion Ticket Worth it for Europe Award Travel?

How to Maximize the British Airways Companion Ticket on Award Travel