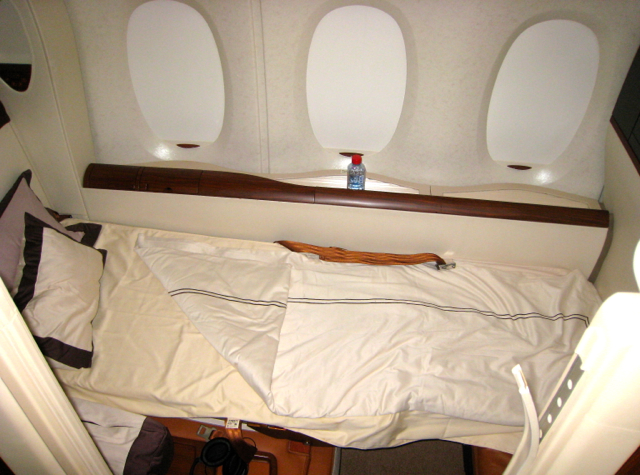 How to Avoid Getting Sick on a Plane? The WSJ's Scott McCartney posted on The Trouble with Keeping Commercial Flights Clean yesterday, which pointed out what most flyers know but don't like to think about: the fairly cursory cleaning planes get during their brief turn times, with many surfaces such as tray tables only wiped down overnight, and sometimes only with general purpose cleaners, not disinfectant. Combine that with the fact that deadly bacteria can survive on planes for 4 days, and it's enough to make some of us squeamish.

With that in mind, here are some tips to help you stay healthy and how to not get sick on a plane flight:

While washing hands is a good start, I find the problem is that it can take multiple pressing of the faucet to get 20 seconds of water for proper hand washing in an airplane lavatory, plus it's honestly not the best water to begin with (there's good reason why it's not potable). That's why I always carry Hibistat antiseptic wipes with me. These are heavy duty wipes used in hospitals, and has residual kill capability, killing germs up to 6 hours after use. Rub hands vigorously with the towelette for 15 seconds, and also use the towelette on your tray table and other surfaces you'll be using during your flight.

2. Use a Hibistat Wipe or Towel to Open Lavatory Doors and Touch Faucets

Airlines set their own cleaning regimens and it's an area that can be subject to cost-cutting by more economically strapped carriers. McCartney cites United as previously only doing a deep clean of planes once every 18 months (!) although it now claims to do them several times a year, after increasing passenger complaints. While there can be other passenger complaints over international carriers such as Singapore Airlines, Cathay Pacific, JAL, Asiana, etc., cleanliness isn't usually one of them.

4. Get Enough Sleep Before, During, and After Your Flight

Lack of sleep doesn't only affect your cognitive functioning and productivity–it also weakens your immune system. Particularly if you have a long flight and have trouble sleeping on flights, make sure you're well rested before your flight, and are able to get sufficient sleep in your destination.

While first class and even business class may seem like a luxury, they can significantly reduce your chances of getting sick, especially on long international flights when there's considerable distance among the seats or suites:

6. Stay Hydrated and Avoid Too Much Alcohol and Caffeine

Planes have much drier air, which can be a problem for skin and nasal passages, leaving you more suceptible to colds. Make sure to drink plenty of bottled or filtered water (not water from the plane's water tank, see more on this below) and avoid drinking too much alcohol and caffeine–not only can they interfere with sleep, they're very dehydrating.

Since dry nasal passages leave you more vulnerable to colds and sinus infections, take a tip from some flight attendants: apply a bit of vaseline around your nostrils to keep them moist.

8. Avoid Too Much Sugar During the Flight

Go easy on sugary drinks and desserts as well during your flight–a sugar high can also weaken your immune system, leaving you more suceptible to getting sick.

9. Avoid Tea or Coffee Unless Made from Bottled Water

There's good reason why most flight attendants and many passengers bring their own coffee and tea on board, and it's not just in order to have an espresso drink: the water carried on many flights, at least of U.S. carriers, is not all that clean–it's filled at airports all over the country, and some of the supply hoses are pretty grimy. The EPA retested water on commercial airline flights in 2013, and 12% of airplanes tested positive for coliform, an indicator that other harmful bacteria may be in the water. See EPA Tests Show High Percentage of Airplanes Still Have Bacteria in Water Served in Water.

What are your tips for how not to get sick on a plane?

The Luxury of Travel…and Not Traveling

10 Hotel Habits of Mine