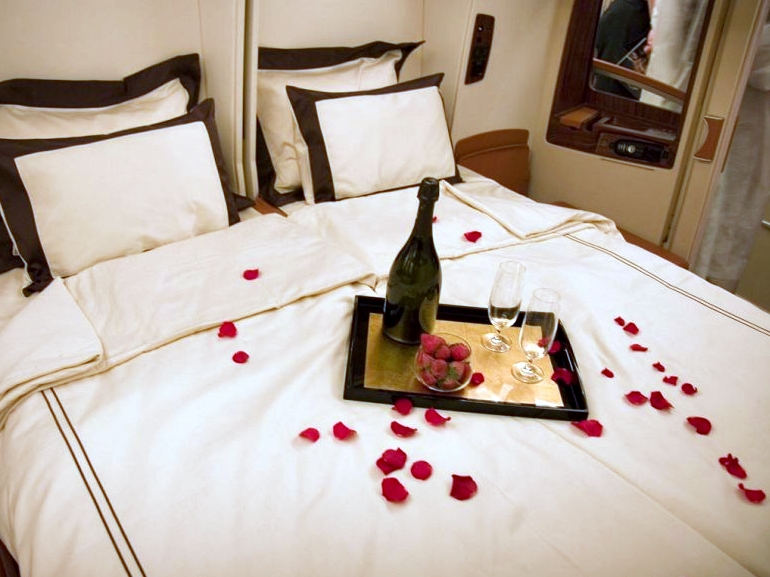 What are the best first class and business class flight awards to Europe using frequent flyer miles? TravelSort reader Mark writes:
“In your opinion what's the best use of Ultimate Reward points for Europe to NYC in First Class and Business Class? Most likely Paris or Amsterdam to NYC, just a one way.”
Great question. Since Mark specifically asks about using Ultimate Rewards points, I'll first cover the best available first class and business class options using UR points, but then discuss what I believe are the best alternatives for business class and first class between the U.S. and Europe, using other frequent flyer miles and points.
Ultimate Rewards Points Not the Best Choice for First Class / Business Class After United Devaluation
It was already challenging to use Ultimate Rewards points for couples wanting first class awards between the U.S. and Europe, since the best available first class product, a Lufthansa first class award, was only available up to 15 days in advance, and often for just one person, not two. Still, if you were very flexible with traveling dates, it was a great deal if you could get it, at just 67,500 United miles each way.
Now, after the United Award Chart Devaluation, that has risen to 110,000 United miles each way, a 63% increase.
Even if you're willing to fly Lufthansa Business Class or SWISS Business Class, that has increased from 50,000 United miles each way to 70,000 United miles each way, a 40% increase. Note that if you can find availability, I recommend SWISS Business Class over Lufthansa Business Class because Lufthansa's old Business Class is angled flat, and even Lufthansa's New Business Class, with its narrow footwells and lack of aisle access for the window passenger, in my view, lags SWISS Business Class, which offers a staggered product with direct aisle access for virtually all passengers.
Best First Class and Business Class Awards Between Europe and U.S. Using Ultimate Rewards Points
1. British Airways New First Class
If your only option for award flights is with Ultimate Rewards points, your best option for a first class award is British Airways New First Class, by transferring Ultimate Rewards points to British Airways Avios. A one way award from Paris to NYC via LHR will run 69,000 Avios + $410 in taxes and fees per person or, if departing from London, 60,000 Avios + $585 in taxes and fees per person. Don't forget you can get all or most of those taxes and fees on a one way award refunded if you pay them with your Barclays Arrival Card, since the 40,000 miles signup bonus equates to a $400 rebate on travel, then, with the 10% miles rebate when redeeming for travel, another $40 rebate for future travel.
Keep in mind that Avios is a distance based award chart, so each segment, such as Paris to London, will require more Avios. London LHR is notorious for its high APD (Air Passenger Duty) taxes, so you do avoid paying it if you are not originating in the UK and are instead a transit passenger, for example because you departed Paris and are in transit, waiting for your flight to the U.S.
In either case, as a British Airways First Class passenger, you'll be entitled to use the Concorde Room. While it's not the best first class lounge, and I actually had the worst airport lounge massage ever at its Elemis Spa, I did enjoy the private cabana we reserved in advance, and most of the food we ordered (except the burger) was good. 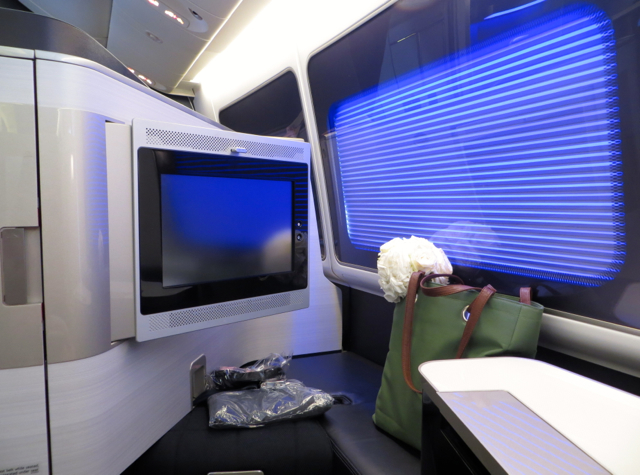 2. Iberia Business Class on the A330-300
While British Airways service is often better than Iberia, Iberia's A330-300 does offer a nice staggered product (similar to SWISS) with direct aisle access for each passenger. And if you transfer Ultimate Rewards points to British Airways Avios, then to Iberia (note your BA and Iberia accounts must have both been open for at least 3 months to transfer Avios between them) you can save on the taxes and fees, not to mention on going through London LHR, which many folks would happily avoid. Plus, advance seat selection is free, unlike on British Airways. Business Class is 40,000 Avios + taxes each way, per person. 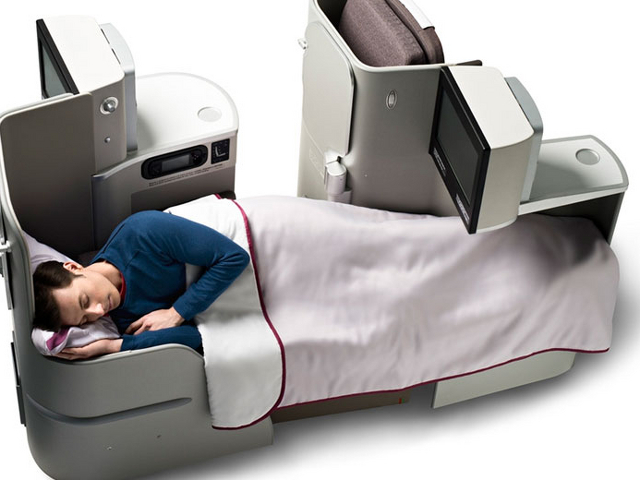 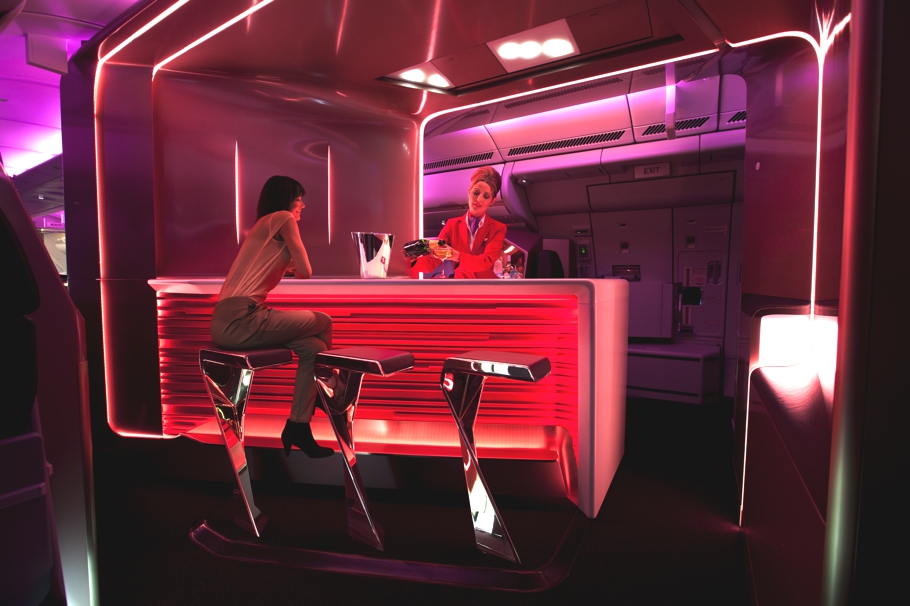 Overall Best First Class and Business Class Flight Awards Between Europe and U.S. Using Miles and Points
1. Singapore Suites Between NYC (JFK) and Frankfurt (FRA) with KrisFlyer Miles
My top choice for a truly luxurious nonstop flight between Europe and the U.S. is Singapore Suites (first picture of this post). This is the only enclosed private suite option to and from Europe, and is also featured in our post Best First Class Airline Seats for Couples. Just keep in mind that the flight departing Frankfurt for NYC is in the early morning, so you'll likely end up overnighting in Frankfurt prior to it. To book Singapore Suites, you'll need KrisFlyer miles, which you can transfer SPG points or AMEX Membership Rewards to. Booking two seats to or from the U.S. will likely require you to book far in advance, and to book one Saver and one Standard award.
2. Lufthansa New First Class with Miles & More Miles
Lufthansa new first class can only be booked far in advance using Miles & More miles: you'll need 85,000 miles each way per person, and taxes and fees will be lower when departing Europe, instead of the U.S. This is an especially good option for those on the West Coast, who want one of the coveted nonstop first class flights to or from Europe. Also see Best Ways to Use the Lufthansa Miles and More Award Chart.
3. British Airways New First Class with Avios
While plenty of folks like to bash British Airways First Class and compare it to top airlines' business class products, I'd still rank this as number 3 when it comes to non-stop premium products between the U.S. and Europe, based on my flights. No, it's not in the league of Singapore Airlines, but honestly, I received better and friendlier service than in Lufthansa First Class, even if the culinary offerings weren't as haute. That said, Lufthansa has a slight edge when it comes to its first class lounges, such as the Frankfurt First Class Terminal or even the Munich First Class Lounge, where the cooked to order food was superior to that of British Airways' Concorde Room First Class Lounge (although the Munich Lounge does not offer private cabanas or complimentary massages).
4. Singapore Business Class with KrisFlyer Miles
Singapore Business Class is many people's preferred option to Europe, with the same route between NYC and Frankfurt as noted above, but with fewer miles. It's of course not as luxurious or over the top, but then again, this flight is only a bit over 7 hours, and for the red eye from the U.S. to Europe, most folks just want to sleep. 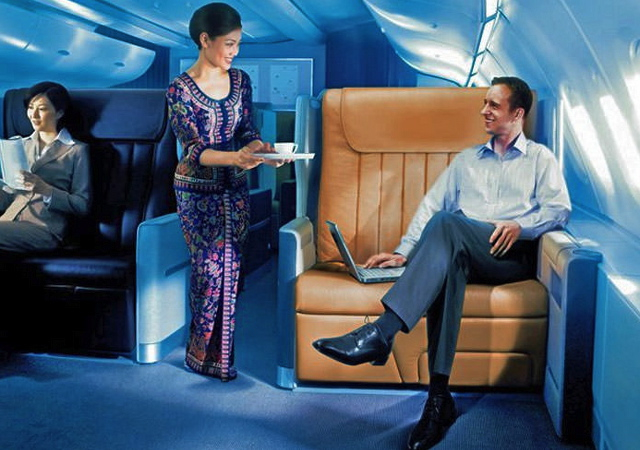 Note that the LAX flight is almost impossible to get as an award ticket, as of this writing. Yes, I've seen it once, but don't count on it, especially for two people. Your best bet right now is to travel in April from NYC or Dallas, and make sure to look for the 77W designation. See this page for the flight numbers currently served by American's Boeing 777-300ER with its new First Class. A first class award is 62,500 AAdvantage miles each way per person. 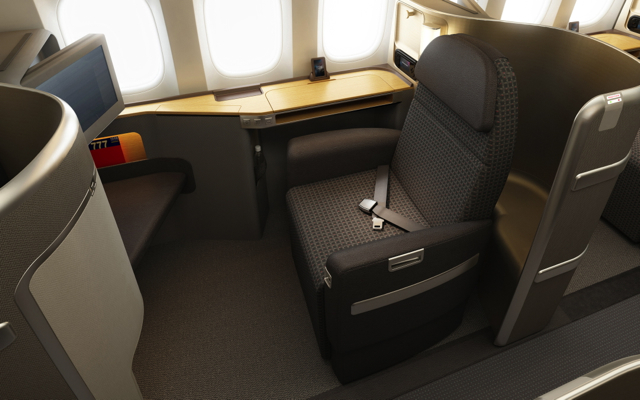 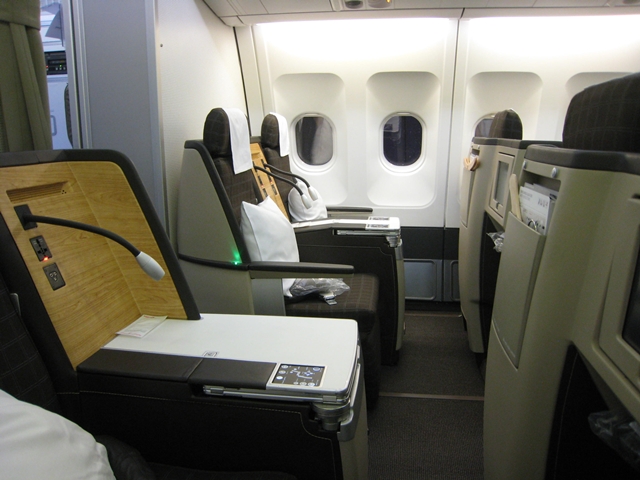 7. Iberia Business Class with Avios
Iberia may not be known for stellar service, but Iberia Business Class does offer flat bed seats, and they are longer, than, say, Air Berlin. Try to book the A330-300, where each seat offers direct aisle access. Fuel surcharges are lower when booking with Iberia Avios (note that your Iberia and British Airways accounts must both be over 3 months old to transfer between them) and another good aspect compared to British Airways is that you can select seats in advance free of charge. British Airways charges for all advance seat assignments, except for first class.
What are your favorite first class and business class awards using frequent flyer miles and points, between Europe and the U.S?
Related Posts
Best First Class Airline Seats for Couples
United Award Chart Devaluation
SPG Airline Partners: Transfer Starwood Points into Miles
British Airways New First Class Review