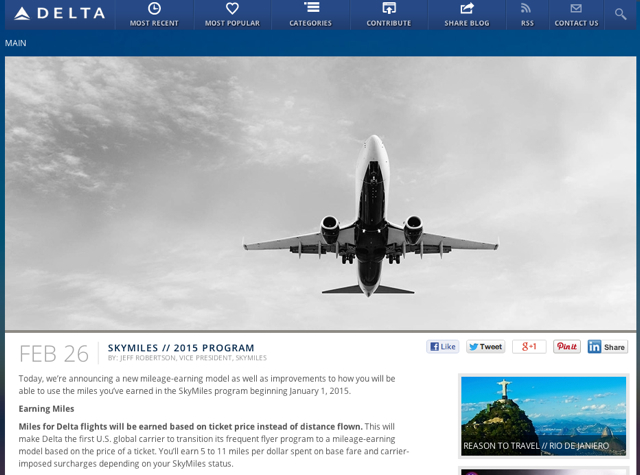 Delta's SkyMiles Program is going fully revenue based, effective January 1, 2015, marking a significant devaluation for many Delta flyers. This means that all SkyMiles earnings for Delta flights will be based on the ticket price, instead of the distance flown, similar to the revenue based programs at JetBlue, Virgin America and Southwest. See the Delta announcement.

In today's WSJ article (subscription required to read full article), Jeff Robertson, VP of the Delta SkyMiles program notes “The top 4% of Delta customers drive more than a quarter of its revenue…it is important for Delta to give a higher rewards accrual rate to the passenger who spends thousands of dollars a year on Delta, has elevated elite status and may take many short but costly flights, than to an infrequent, leisure traveler.”

While it makes sense that Delta, or any airline, would want to ensure the top spenders are well rewarded, I also think Delta is counting on United and American following its lead in making their frequent flyer programs revenue based. After all, there's the other 75% of Delta's revenue from the other 96% of Delta customers, and leisure travelers who individually are insignificant to revenue, collectively can make a difference if enough of them shift to other, more rewarding loyalty programs. But if United and AA follow suit and the current cabotage laws prevent foreign airlines from introducing some competition to U.S. domestic routes, then Delta has little to worry about.

While I've never collected Delta SkyMiles for a few reasons–no ability to redeem for international first class, no one way awards, an expensive award chart, mediocre credit card bonuses vs. the best travel rewards credit cards–I do feel for my Award Booking Service clients and readers who are based in Delta hubs and primarily fly Delta, earning SkyMiles. My advice to those with mainly Delta SkyMiles is to diversify away from the program, leveraging credit card signup bonuses, category spend bonuses, and online shopping portal bonuses. See Diversify Your Miles and Points Portfolio: Top 8 Reasons

Here are the details on earning levels. Unfortunately (see FAQ below) we don't yet have info on the new award chart redemption levels.

By way of comparison, here is the current SkyMiles earning chart for travel prior to January 1, 2015: 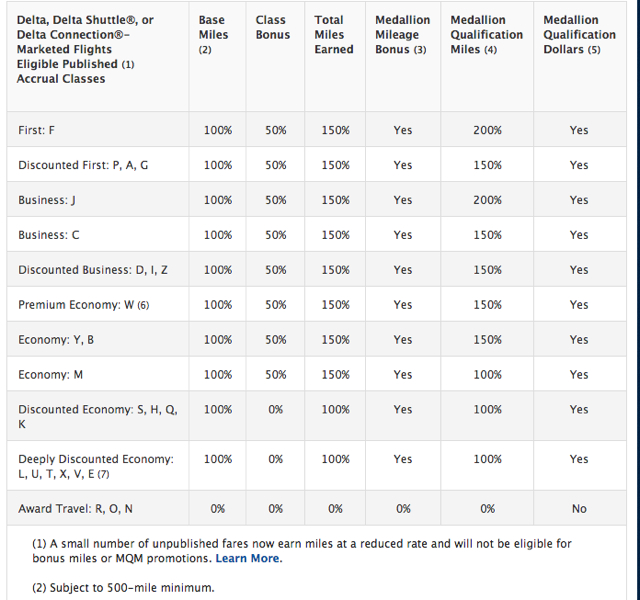 Future SkyMiles Earning Starting 1/1/15 for a Non-Elite: ~782 SkyMiles (note that the 5 miles per dollar excludes government taxes and fees)

The new SkyMiles program would award only 32% of the currently earned SkyMiles for a non-elite on this deeply discounted economy fare.

Future SkyMiles Earning Starting 1/1/15 for a Diamond Medallion: ~12,375 SkyMiles (note that the 5 miles per dollar excludes government taxes and fees); or 14,625 SkyMiles if booked with a Delta SkyMiles credit card, for an extra 2 SkyMiles per dollar

That's 340% (400%, if booked with the Delta credit card) of the currently earned SkyMiles for a top-tier Delta elite on this discounted business fare.

Who Wins with the Delta SkyMiles Frequent Flyer Program Changes?

Who Loses from Delta's Changes?

Who's Indifferent?
Are There Any Good Delta SkyMiles Changes if I'm Not a High Spending Business Traveler?
1. More Award Seats at Low Levels? Delta *claims* that there will be “more award seats available at the lowest redemption levels” but we'll have to see how that plays out, given that there will also be more redemption levels.
2. One Way Awards: The best new change is that there will be one way award tickets for half the price of round-trip tickets. Of course, Delta is playing catch-up here, given that United, American, and most international frequent flyer programs already allow one way awards for half the price of roundtrip awards.
3. Miles & Cash Awards: You'll be able use a combination of miles and cash to pay for awards. New for Delta, although not new for programs such as British Airways Executive Club, which also allows cash and Avios awards, and of course this is already established for hotel programs such as SPG Cash & Points, Hyatt Cash and Points, etc.
What Doesn't Change? 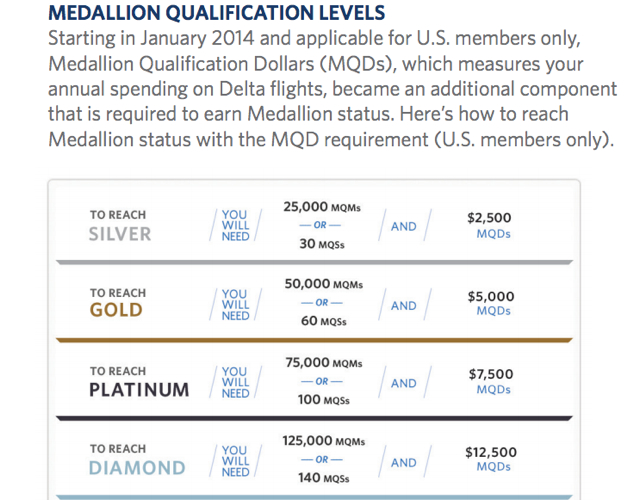 What Do I Earn From SkyTeam Partner Flights?
The mileage earned will be “based on a percentage of distance flown and fare class paid. More details will be announced later in 2014.”
Where is the 2015 Delta SkyMiles Award Chart?
TBD: “They will be available later in 2014.”
What do you think about Delta's fully revenue-based SkyMiles program?
Related Posts
Top Tips for Using Delta SkyMiles for Asia Award Tickets
Delta Brings Westin Heavenly Bed to BusinessElite
Best International Business Class Seats for Sleeping
How to Find SkyTeam Award Space Using Delta SkyMiles