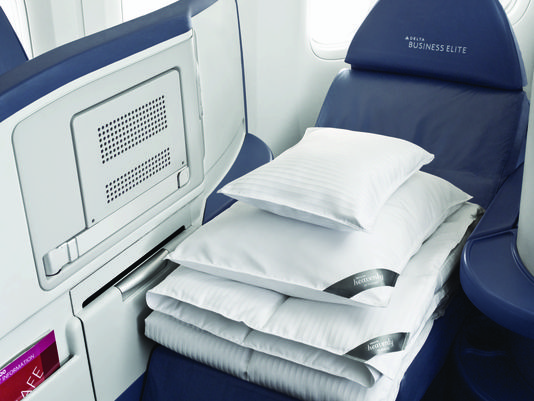 I never fly Delta and don't have any Delta Skymiles, otherwise known as Skypesos given how little they're worth. But even I have to grudgingly hand it to Delta for bringing Westin Heavenly Bed aboard its BusinessElite cabin. The details:

What:
Thanks to Chris Babb, Delta's Manager of Customer Experience – Aircraft for posting these details on Flyertalk.

Why: Delta said in its press release that customers say the most important part of the in-flight experience is sleep. Once Delta offers full flat bed seats on the transcontinental routes between NYC to LA and San Francisco, this enhanced soft product does seem to make it more competitive, at least if the flights are priced similarly. That said, I'll bet it will be pretty hard to get saver award availability on these flights.

Personally, while the bedding does seem quite good, seems to me that it's missing a mattress pad, at least for Delta's international routes. Lufthansa, Singapore Airlines and most other international carriers offer it in their first class cabin, although it's true that Delta's BusinessElite product doesn't compete directly with those anyway. For international business class it seems very competitive on those flights that offer flat bed seating, either in staggered or herringbone configuration.

The release also mentions that starting March 2013, Delta will start having full flat-bed seats in BusinessElite for flights operating between New York and Los Angeles, San Francisco and Seattle, with all Boeing 757 and 767 aircraft serving these transcontinental markets being configured with the flatbed seats over the next 2 years.  By the end of 2013, 70 percent of all Delta aircraft will have flat beds and, in early 2014, Delta's entire widebody fleet is scheduled to be complete.

That said, I'm most impressed with the marketing coup, given the name recognition of the Westin Heavenly Bed. Perhaps some other cutting edge airlines can team up with the Four Seasons or Ritz-Carlton for revamped bedding in First Class?

Plan to fly Delta's new BusinessElite with Westin Heavenly Bed? Since I still doubt I'll be flying Delta, would love to hear a TravelSort reader's experience with the new product after it rolls out.