As I wrote about in late 2010, we’re seeing a changing landscape in the airline industry whereby airlines are eliminating first class and instead adding a premium economy product. With the recession and continuously improving business class products, how could any executive justify first class nowadays, given that many airlines have flat bed business class products? We’re seeing this trend right now with Cathay Pacific and Qantas, whereby just about all of their new aircraft are three cabin planes with coach, premium economy, and business class.

It’s also worth noting that several US airlines have an “economy plus” product, though that’s a bit different than premium economy. Premium economy is typically found on longhaul flights and similar to domestic first class, often with added services, like premium check-in and/or an enhanced food selection. The “economy plus” products found on US airlines, on the other hand, typically only feature a bit of extra legroom. Presently United offers Economy Plus on all of their aircraft, while Delta offers “Economy Comfort” on much of their longhaul fleet, and will soon be expanding it to their domestic fleet. American has also announced that they’ll be installing a section with extra legroom on their new 777-300ER aircraft, which they’ll be taking delivery of later this year.

While premium economy fares vary greatly based on the route and airline, I’d say as a general rule they’re about twice as much as coach fares and half as much as business class fares.

Qantas is focusing heavily on the premium economy market as they cut first class out of much of their fleet in lieu of a larger premium economy cabin, where they seem to be see more potential. They have the standard reclining seat, though offer premium economy passengers better food and priority check-in.

Qantas Frequent Flyers can redeem their points for premium economy at a 50% premium over economy. 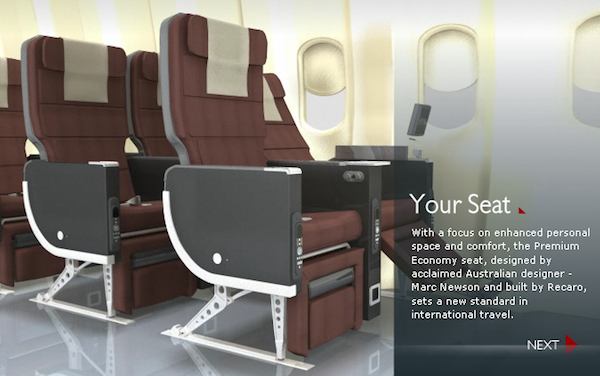 Air New Zealand lets you redeem Airpoints for premium economy awards, typically at about a 50% premium over economy.

The seat gets pretty good reviews for comfort and sleeping given that the recline is fairly decent. The issue is that when the person in front of you reclines space is very limited, as the seat is really designed to maximize sleep. This is one benefit of Air New Zealand’s new premium economy seat, where you can’t in any way encroach on the space of the person behind you, given that it’s a shell seat.

Virgin Atlantic more or less pioneered premium economy, and their product hasn’t changed all that much over the years. The seat itself is very similar to British Airways’, in a 2-4-2 configuration in a 2-3-2 configuration on the A340 and 2-4-2 configuration on the 747, though the seat does have a couple of extra inches of width. Much like with British Airways, personal space can be very limited when the person in front of you reclines, so being in premium economy is probably more useful on a flight where you want to sleep, as opposed to a daytime flight.

You can redeem Virgin Atlantic Flying Club miles for Premium Economy at a premium of roughly 50% over economy.

While Air France’s Premium Voyageur Class is a pretty standard premium economy product in the rest of their fleet, on the Airbus 380 they have up to 49” of pitch, which is industry-leading for a premium economy product. It’s worth noting that Air France has two versions of the Airbus 380, and only one version features a Premium Voyageur Class, so be sure to look out for that when making a reservation.

This seat really is the best of both worlds, given that it not only has excellent recline, but is also a shell seat, meaning you won’t be uncomfortable if the person in front of you reclines.

Air France Flying Blue miles can be redeemed for Premium Voyageur Class, for an approximately 50% premium over economy.

I suspect that over the coming years we’ll see premium economy become more relevant for those of us in the US, not just because the product is constantly getting more popular, but also because I suspect it will eventually be introduced as a mileage redemption option for US frequent flyer programs.

In a few years I suspect we’ll see a lot more airlines with premium economy cabins than first class cabins, so it will be a serious consideration when booking a flight.

Have you flown premium economy yet? If so, on which airline and how was your experience?