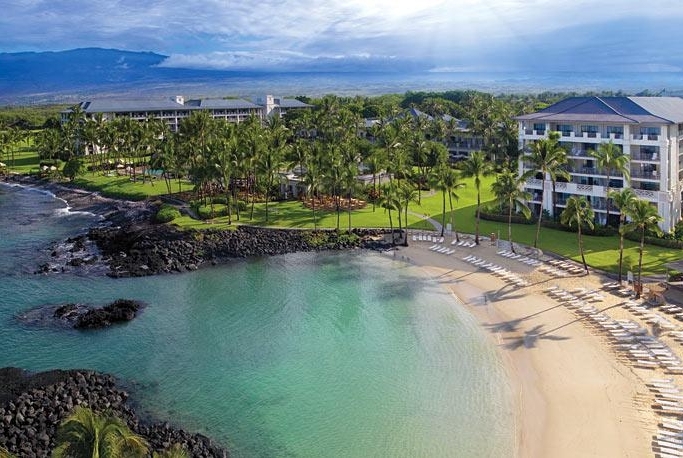 Hawaii isn't only a state; it's also the name of the biggest of the Hawaiian islands, affectionately known to locals as the Big Island. As a local who spent 17 years growing up in Hawaii, the Big Island is also my favorite of the neighbor islands, and the one I most recommend to visitors, at least those who want to actively explore Hawaii and not only relax on the beach. It really is the one I often suggest to couples planning a Hawaiian honeymoon and wondering “which island?”

If you enjoy nature, you'll be in your element, with everything from an active volcano and the Hawaii Volcanoes National Park to hiking up to beautiful waterfalls or even stargazing atop Mauna Kea, the best place for land based astronomy in the world thanks to its altitude and low light interference. Snorkelers can look forward to night diving with Manta Rays and Hawaiian Spinner Dolphins off the sunny Kona Coast. Don't miss seeing Hawaiian petroglyphs on the Kohala Coast–those on the Big Island are the best preserved. And for a colorful local vibe, head to Hilo and put together a picnic from the fresh produce and baked goods at the farmer's market, or browse the many art galleries.

Four Seasons Hualalai
When a professional photographer is quoted as saying “this is probably the only place where the site looks as amazing as the Web site photos” it gives you some inkling as to the gorgeous resort and views in store at the Four Seasons Hualalai. There's a reason this resort consistently rates as one of the best in the world, from the rooms that start at over 600 square feet to friendly staff who goes above and beyond to the seven pools, including an ocean water pool and King's Pond, a swimmable aquarium with over 75 species of fish and an Eagle Ray to swim with. Kids ages 5-12 get to enjoy the complimentary Kids for All Seasons Kids Club, with outdoor sand sculpture, treasure hunts, canoe lessons and Eagle Ray feeding, while parents unwind in the expansive spa, with perhaps a traditional lomi lomi massage, or enjoy the Jack Nicklaus signature golf course. If we had to critique, there are occasions when large corporate groups virtually take over the resort, including its prime pool areas and restaurants. And we'd love to see some more local specialties at the Beach Tree Restaurant, in addition to its delicious Italian specialties. Book a 3 night or more stay with TravelSort, and we'll provide our Award Booking service for your Hawaii trip complimentary to you and your guest. 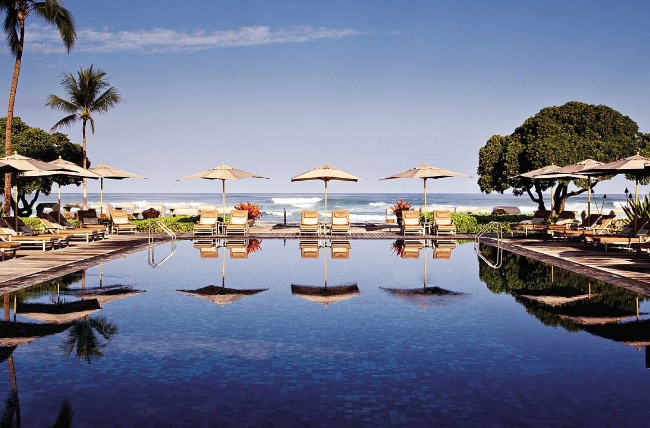 If you don't have about $800 or more a night to spend at the Four Seasons or want a homier experience, the Mauna Lani Bay is a good bet. Look beyond the 70s exterior to enjoy its beautifully lush landscaping, extensive fish ponds, and the crashing of waves against the beach. Splurge on a Deluxe Ocean View or Ocean Front Room to be able to wake up to views of the sea, or if with a large family, consider a bungalow with its own small pool and jacuzzi. Take advantage of the lovely beach and some great snorkeling (snorkeling gear is complimentary for guests to borrow, as are bicycles). Unlike some other Hawaii properties, in general the Mauna Lani is peaceful, without any loud groups. Do note that there is currently some renovation near the pool area, so we are advising our clients to book rooms away from this area or even delay their visit to avoid the potential noise. Golfers are catered for with two championship courses, Mauna Lani North and Mauna Lani South. Don't miss a meal at the Canoe House, overseen by Allen Hess–try the roasted kabocha squash soup, kampachi with kabayaki glaze, pulehu pork ribs, and strawberry shortcake. 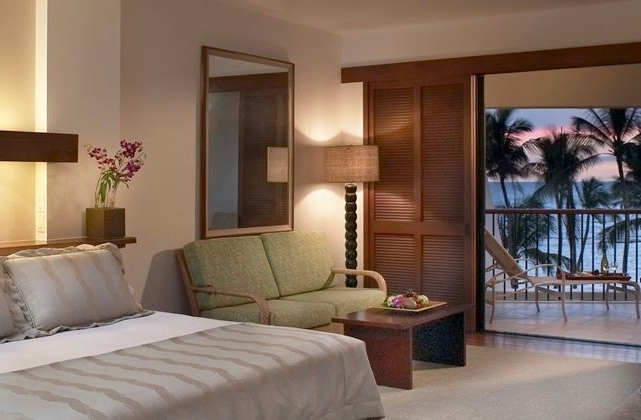 Fairmont Orchid
Just a stone's throw from the Mauna Lani Bay, The Fairmont Orchid is a great option if you're looking for a bit more luxury than the Mauna Lani Bay, but not up to the Four Seasons pricing. Set on 32 oceanfront acres, the Fairmont Orchid offers not only a lovely white sand beach and oceanfront pool, but also tennis courts, a 36 hole golf course, and a kids club. Fairmont Rooms are 522 square feet, so a bit smaller than entry level rooms at the Mauna Lani Bay, but still spacious, with a King or two Queen beds, marble bathroom with a separate shower and bathtub, and a private balcony with views of the lush gardens. If you want the best possible view, book a Signature Ocean Front Room or Suite on a high floor, as these offer simply stunning Pacific Ocean views. Another tip: if you plan to enjoy a massage at Spa Without Walls, book the last appointment of the day, at sunset, so that you can continue to relax in your oceanfront cabana, with no appointments after you. Our only caveats are that, as at the Mauna Lani, there are some renovations taking place of certain rooms, so request a quiet room away from that work; and also note that Internet access can be spotty in some rooms. You can obtain 2 complimentary nights here with the Fairmont Visa. We don't receive any referral for this card, but want to make you aware of this deal. Read our full Fairmont Visa Signature Card Review. 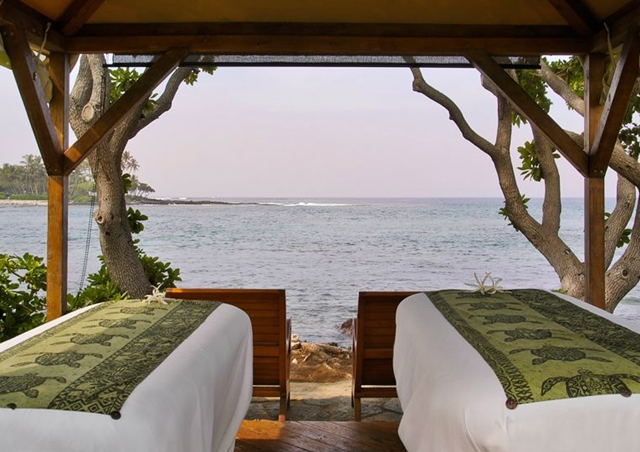 Getting to the Big Island of Hawaii with Miles and Points
While the Big Island does have both airports at both Hilo (ITO) and Kona (KOA) most visitors will fly into Kona and stay at one of the Kohala Coast resorts, where it's sunnier.
There are nonstop flights to Kona from several airports including:
Honolulu (HNL): Hawaiian
Kahului (OGG): Mokulele
LA (LAX): Alaska, American, Delta and United
Oakland (OAK): Alaska
Phoenix (PHX): United, US Air
San Jose (SJC): Alaska, Delta
San Francisco (SFO): United
Seattle (SEA): Alaska
Vancouver (YVR): Air Canada
From other cities, you'll need to to fly to Honolulu or Maui, then take an interisland flight to Kona.
For United award flights from the East Coast, you could either try for an award in BusinessFirst on the EWR-HNL nonstop (hard to get) or if you're willing to stop on the West Coast you could take a PS flight with lie-flat seats to SFO or LAX, then a BusinessFirst flight to Hawaii. If you're lucky, you may even be able to get flat bed seats to Hawaii on United.
The best way to earn United miles is with signup bonuses and category spend on cards that earn Ultimate Rewards points, then transfer points 1:1 to United MileagePlus miles, such as the Ink Bold, Ink Plus and Sapphire Preferred.
Plus, as I wrote in Use United Free One Ways to Maximize Your Award, you could add a cheap Hawaii one way to your roundtrip award, even if you don't live in a United hub. It won't be free, since United considers Hawaii a different region from the continental U.S., but you'll use fewer miles than a separate one way award.
American Airlines award flights from the West Coast are cheapest using British Airways Avios points: just 12,500 one way or 25,000 roundtrip in coach. You can earn 50,000-100,000 Avios with the British Airways Visa.
If you have an Alaska Airlines companion voucher issued before 8/1/12 from the Alaska Visa, you can use it for first class; if it's issued 8/1/12 or after, it's valid for economy only. See Alaska Airlines Visa Approved: First Class Companion Ticket to Hawaii.
If you've been to Hawaii's Big Island, what was your experience?