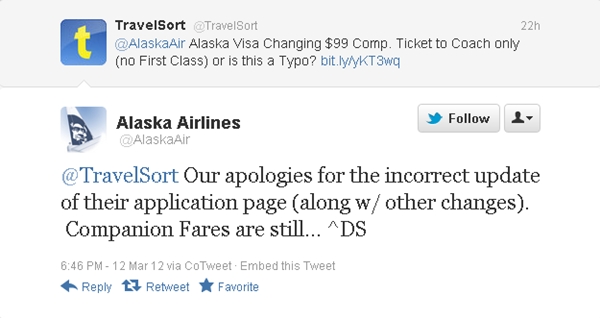 While answering a reader question earlier today about getting a family of 5 to Hawaii, I took another look at the Alaska Airlines Signature Visa card. It currently only has a 25,000 mile bonus offer (last year they were offering 40,000 bonus miles at one point) but what surprised me most was that on a couple of the credit card applications, Alaska Airlines specified that the annual Companion Fare is limited to coach:

“Receive an annual coach Companion Fare from $110 ($99 base fare plus taxes and fees, from $11 depending on your Alaska Airlines flight itinerary).” 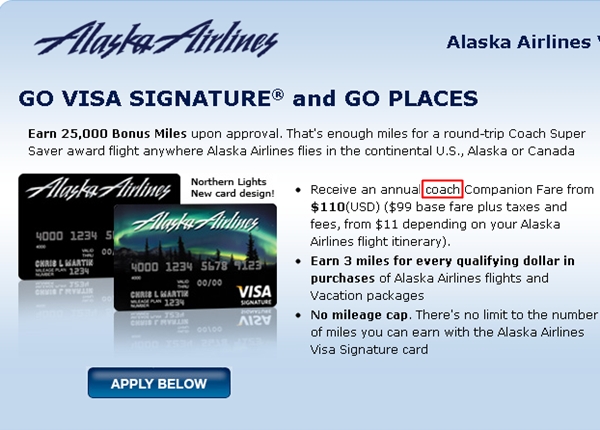 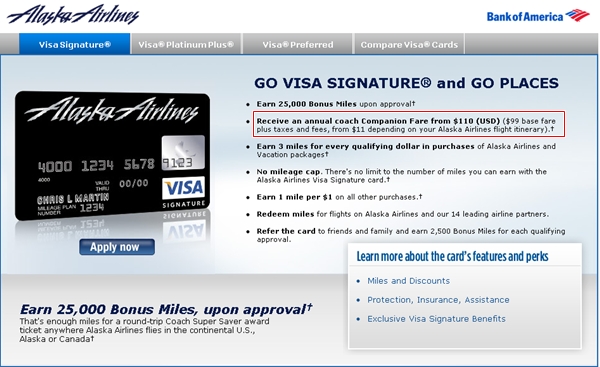 I checked the Terms and Conditions, and they make no mention of the companion ticket now being limited to coach tickets:

Cardholders that qualify for the Visa Signature card will receive an annual Companion Fare from $110 (USD) ($99 base fare plus taxes and fees, from $11 depending on your Alaska Airlines flight itinerary).  The Companion Fare e-certificate is issued upon approval of a new account and on each anniversary thereafter.  Mileage Plan miles cannot be used as a form of payment, however both the paying customer and the companion may accrue Mileage Plan miles.  Passenger and companion are responsible for applicable checked baggage fees.  Applicable taxes and fees are subject to change.

This would be a huge loss for many Alaska Airlines Visa cardholders, since the companion ticket being usable for domestic first class is the biggest benefit of this card, especially on flights to Hawaii. In fact, Ben called it “the best kept secret for reasonably priced first class airfare to Hawaii” in his post Tips for Booking Award Flights to Hawaii. Note that as of December 1, 2011, you can only redeem the companion ticket by booking online, not over the phone.

There are a few questions:

I also saw a comment on milepoint that someone had called Alaska on this, and was told there was a computer problem, and that the wording would be fixed in a few days.

Hmm, really? The word “coach” just kind of snuck in there due to a computer snafu? I don't think so…but in any case, if you have or planned to get the Alaska Visa, it wouldn't hurt to let Bank of America and Alaska Airlines know how you feel about this change (or typo, as the case may be):