Since Alaska Airlines MileagePlan is region based, there are just two charts published: one for India, the Middle East and Africa, and one for Asia.

Emirates Award Chart for Africa, the Middle East and India: 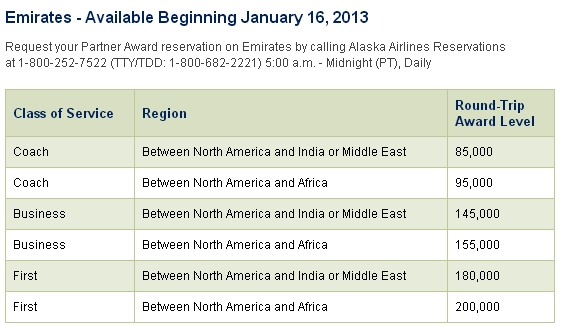 I figured at least some readers might have questions about Alaska Airlines' new Emirates award chart, so here's a quick FAQ. Got a question not answered? Just let me know in the comments, and I'll do my best to answer it.

What's the Big Deal with Emirates–Why Is Everyone So Excited?

Let's cut to the chase: the onboard shower in Emirates First Class on the A380. Utterly unique on a commercial aircraft, and Emirates is your only chance to experience it.

Service is also said to be superb, though I haven't experienced it and it's hard for me to imagine it being so much better than the best Singapore first class or Cathay Pacific first class service.

Why Aren't There Charts for Other Regions: Europe, Australia, South America?

Alaska didn't publish Emirates awards charts for the regions where it wouldn't make sense for most travelers to fly Emirates. For example, going to South America would entail going to Dubai first, which while there are probably quite a few TravelSort readers who would be happy with this routing (!) would make little sense for the typical traveler.

Which Destinations Does Emirates Fly to in Africa? 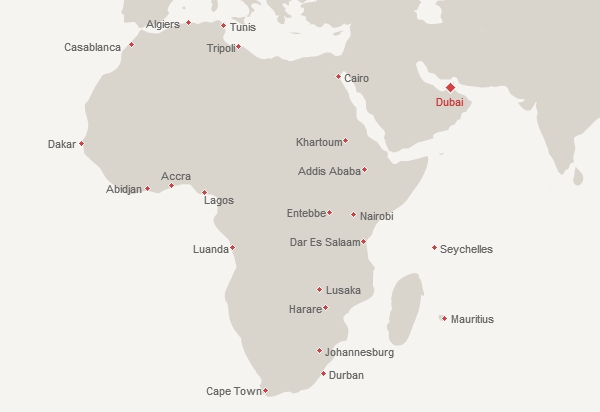 Which Destinations Does Emirates Fly to in India, the Middle East and Asia? 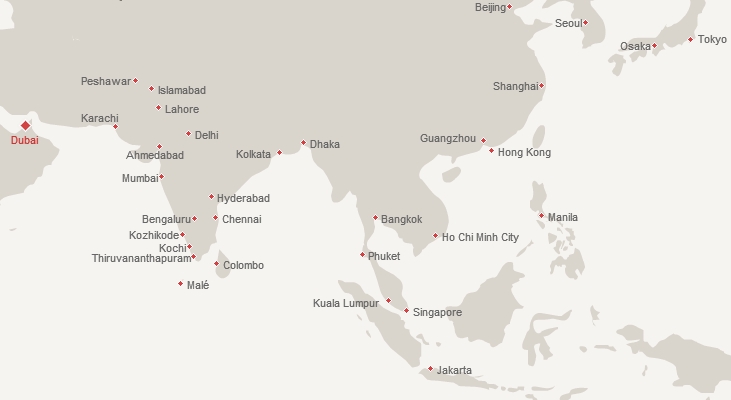 How Do I Search Emirates Award Space?

You can search on Emirates' Web site for saver award space, which should approximate Alaska award availability. Or, you can get a free trial or paid subscription to Expert Flyer and search for First (Z fare bucket) or Business (D fare bucket).

Can I Book a One Way Emirates Award Ticket?

Unfortunately no–currently all award travel must be roundtrip.

What Are the Best Values in the Emirates Award Chart?

Value is relative and in the eye of the beholder, but first class to Africa for 200,000 miles is the same as for American, but you won't pay the heavy surcharges you incur flying British Airways to Africa with AA miles. And while a first class award using United miles is 160,000 roundtrip, it's hard to plan ahead (which most anyone going to Africa would want to do) because you can only book Lufthansa first class up to 15 days in advance, and there's pretty much no Swiss first class award availability at all. Flying Emirates to Africa via Dubai makes more sense flying from NYC or the eastern U.S., but the sweetest deal in the Alaska Award chart remains Cathay Pacific First Class to South Africa via Hong Kong in First Class for 140,000 Alaska miles roundtrip.

First class to India or the Middle East (including the Maldives) is comparable to American–both are 180,000 miles roundtrip–but as with Africa, United is cheaper, at 160,000 miles. The problem is that now that Qatar has left United and is joining oneworld, there's no partner airline that flies direct to India, and who really covets a flight in United first to India?

How Do I Earn Lots of Alaska Airlines MileagePlan Miles?

Sadly, this is the hard part: most people who have tons of Alaska Airlines miles probably either flew Alaska a lot or flew American or Delta and credited miles to Alaska.

Yes, you can churn the Alaska Visa for a paltry 25,000 points, so it will take some time to build up large balances that way.

While you can transfer SPG Starpoints to Alaska (transfer in increments of 20,000 points = 25,000 miles, to get the 25% transfer bonus), most times you'd be better off transferring to Japan Airlines and redeeming through its award chart–see below.

Any Other Ways to Fly Emirates?

You can transfer SPG Starpoints to Japan Airlines, and use Japan Airlines' distance based award chart to book Emirates, which is cheaper for many awards, as Ben pointed out in this post: 135,000 for Emirates first class roundtrip NYC to Dubai, vs. 180,000 with the Alaska chart.

You could of course building up miles in Emirates' own frequent flyer program, but the Japan Airlines award chart is more attractive.

The Verdict: No question, for many Emirates first class is akin to the holy grail, at least partly because of it being relatively unattainable until recently using miles and points. I hope this post on Alaska Airlines' new Emirates Award Chart will be helpful to those who have or plan to have plenty of Alaska Airlines MileagePlan miles.

I'm not in that camp, and for me at least, Alaska Airlines miles are a lot harder to come by than American miles, United miles, Ultimate Rewards points or even AMEX Membership Rewards points. Since I view Singapore and Cathay Pacific first class as more than sufficient substitutes, it's hard for me to justify trying to build up Alaska miles just to fly Emirates, although it's great to have that option should I ever do so. It would be great if American were to eventually partner with Emirates, but I'm not holding my breath, and I really can't complain too much since Qatar is joining oneworld and has a great business class product, even if no first class from the U.S.

How about you, do you plan to use Alaska miles to fly Emirates?

Dubai With Kids: Where to Stay and the Top Things to Do