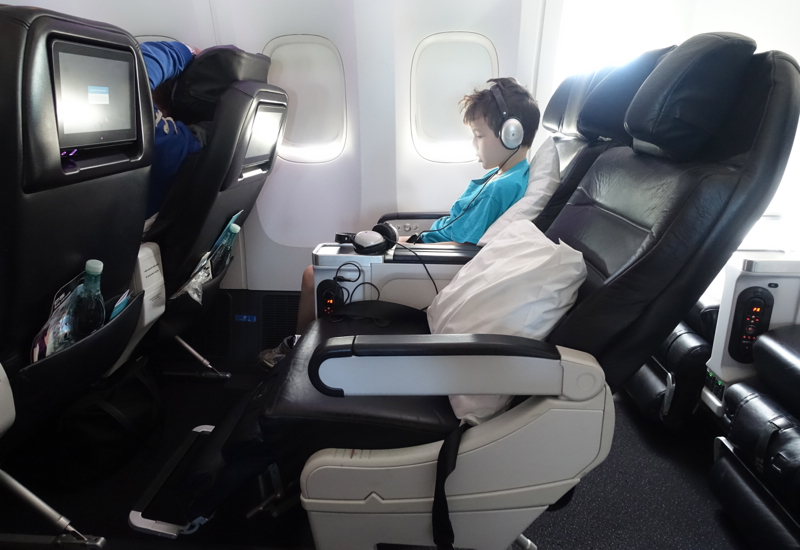 Airlines are making it harder for families to select seats together, even when they reserve in advance, per this WSJ Middle Seat article, “The Airline Fee to Sit With Your Family.” In one example given, for an American Airlines flight from Paris to Charlotte, almost 2 months prior to departure, there were 72 available coach seats an AAdvantage elite could select from, vs. 38 seats a non-elite could choose from, all of which required a seat selection fee ranging from $82-$150 per seat.

While many of the comments to the article blast families for being too cheap if they don't pay these seat selection fees, some of the family (and even non-family) commenters point out that there are plenty of times that families *do* plan ahead and select seats in advance, but these advance seat selections are thwarted by an equipment swap, a flight cancellation, or other airline-induced changes to seating.

I'm certainly in favor of personal responsibility and for parents making every effort to get seats together with their children, but I think there are several safety reasons airlines need to make it easier to seat families with young children together and to put safety ahead of profits from fees (or bake the seat assignment cost into the ticket cost), in this instance. Here's why:

While an emergency evacuation is of course highly unlikely, in the event of one, who is going to ensure that your 3 year old stuck in a middle seat several rows behind you gets out safely, instead of being trampled in the melee?

For a young child, their parents are their world. Seating them alone in a middle seat is a recipe for crying, a meltdown or worse. Flying is already stressful enough for many kids, parents and fellow passengers, so effectively making young children unaccompanied is just irresponsible.

Many toddlers are in the process of potty training, and some get motion sick and will need to vomit. While I firmly believe airlines need to provide a better solution than they have currently, and should not be forcing or pressuring passengers who have already paid extra for aisle seats to switch to a less desirable seat, if you are in an aisle seat and next to a young child without a parent near them, you may want to keep this point in mind. Even as a parent, it's not fun to be thrown up on.

This is probably one of the most cited safety reasons, and while I think and hope it's very rare, it's not something any parent wants to risk, nor would I think airlines want to be defending against a lawsuit about improper touching of a minor after the airline refused to ensure a parent was able to be seated by his/her child.

As with the emergency evacuation scenario, I would think the last thing an airline would want is a child who went into anaphylactic shock because the airline refused to accommodate a parent who wanted to be next to the child, and the child was given (either by the airline or a fellow passenger) something with the allergen.

When airlines allow parents to be seated apart from their young children, it can slow down boarding as the parent tries to negotiate with the strangers seated next to the child so as to be able to sit together. Even in the best case scenario of the child and parent accepting the separated seating, there can be aisle blocking and delayed boarding as the parent tries to settle the child(ren) with food and things to keep them busy during the flight, then get back to his/her own seat.

There's already enough issues with protracted boarding times and delays given the checked bag fees that often cause a shortage of overhead bin space, and separating families exacerbates this potential for delays.

Is there a good solution to avoid the current mess? The one I'd suggest would entail a bundled approach for airline tickets that you had to proactively opt out of. In other words, the default would be a ticket price that included the ability to select any regular economy seat, or perhaps a ticket price that was higher for aisle seats (which are often the most popular) and cheaper tickets for middle seats.

Then, any passengers who wanted an even cheaper ticket and didn't care where they were seated could opt out of that fare, but they'd have to actively select this. This selection option would not be an option for a young child's ticket. Paternalistic? Perhaps. But if airlines can require you to weat a seat belt, stay seated during turbulence and follow all crewmember instructions, this is something they could do for the safety reasons above.

Of course, airlines won't do it since the real reason for unbundling fares this way is so that the fares customers search for online can be more competitive with low cost carriers such as Spirit and Southwest. Just remember the words of this commenter to the WSJ article:

“…If you want to be cheap, the airlines will listen to you and give you what you want. Cheap and uncomfortable service. Cramped seating, small overheads, and nickel-and-dime you for every little thing…Example of this phenomenon? Spirit, anyone? Enjoy that. Enjoy it long and hard once we turn all the airlines into Spirit.

You (collectively) make this happen. The Spiritization of the airline industry, where crappy ‘discount' service increasingly displaces full-service airlines.”

Have you had problems getting seats together with your kids, or been asked to move to allow a family to sit together?

10 Tips to Travel Better with Kids

Flying First Class with Kids: Which Airlines and Seats?

Parental Consent Form to Travel: Does Your Child Need One?